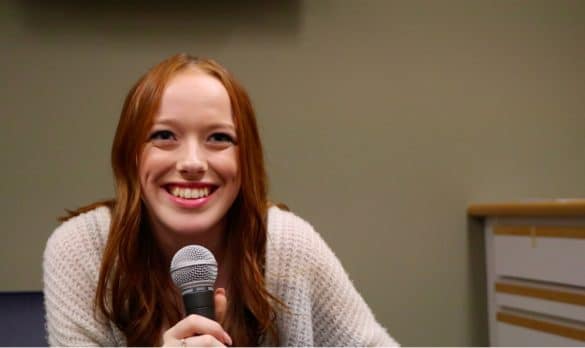 Every time we’ve spoken to Anne with an E lead actress Amybeth McNulty, she’s been such a delight. She answers every interview question with a long, thoughtful response and bookends each with a warm smile. Whenever a new season of the CBC show premieres, we always ask to sit down with McNulty because our wide ranging conversations are always the highlight of every year.

Here is a condensed and edited version of our Anne with an E season three interview with the exceptional (and award-winning!) Amybeth McNulty.

Brief Take: We’ve interviewed you three times over the years, since the beginning of season one, actually. Tell me how you feel you’ve grown and how Anne the character has grown over the three seasons.

BT: The show’s theme song ‘Ahead by a century’ is very apt. Do you see the show as looking at the past or as looking at it through a contemporary lens?

AM: It’s interesting because I suppose, in a way, it’s half and half. You think you’re merging two worlds together that are so different. But realistically, when you look at it, they’re not that different. It’s interesting, especially from a political aspect, society has changed, but what hasn’t changed? I think the topics that we bring up are scarily similar to what we face today in terms of prejudice, bullying, sexism, racism…and it’s unfortunate that that hasn’t changed, but it’s interesting that it still relates so much to today’s audience.

BT: You’ve had numerous top notch directors work on this show and this season is no different, with the addition of Kim Nguyen, amongst others.  Tell me how having different perspectives has helped craft the show.

AM: Well as well as having a diverse, all-female writers room, who give us those aspects in terms of the scripts, which bring something new, the directors are all incredible and all bring their own thing to it that changes up the dynamic of the set, which is really interesting. I think also having Kiawenti:io (Tarbell) this year, who plays Ka’kwet, who is a Mi’kmaq girl who has just been introduced this season, and seeing how Anne and her relationship builds and how they can learn from one another – it’s really beautiful.

BT: Without giving anything away, what’s coming up for Anne this season?

BT: You are a very active reader, like Anne.

BT: When we spoke with you before last season began, you were reading The Hate U Give. What have you been reading lately?

AM: Funnily enough, I actually read the second Anne of Green Gables during season two because I was interested to see what was happening and what was different to what we were doing. It was the first time I had read Lucy’s (Maud Montgomery) work since I was eight or nine. It was interesting going back to it with a fresh mindset, and obviously I see them as two completely different things. But it was so awesome to read it! I kind of visualized R.H. (Thomson) as Matthew, which was such a weird combination, but yeah, that was really cool.

BT: It’s been fascinating to see that the worlds have been diverging a little bit, which is all part of the master plan I’m sure. What’s it been like to see the growth and expansion of the story on screen?

BT: You’re very active on social media and you really connect with fans of the show online. Do you feel a sense of responsibility in terms of what you share on your social channels?

AM: I think it’s an amazing way to connect with people. I mean I’m talking to people that I would never ordinarily speak to in a million years and it really just opens up the box that we all sort of live in. In terms of responsibility, I guess I’ve never really viewed it as me feeling like I have to do something for the sake of other people. It’s a case of if I want to share something about the climate change march, I can do that. I feel like if I view it as a responsibility, it becomes a job, and then I feel like I wouldn’t enjoy it as much. So if I view it as chatting with friends from all over the world and talking about amazing subjects, then it’s awesome.

BT: In terms of the timely themes and subjects broached on the show, how much has working on the show inspired you?

AM: So much. We’re talking about subjects that need to be talked about and it sparks conversations that are necessary. I think to avoid them would be silly, and I think that’s what’s so interesting about parting ways with the book, is we get to talk about some of these subjects that existed. It’s not as if we’re integrating stuff in that is thrown in there from nowhere, it did happen! And again, it sparks conversation, especially because viewers at a young age and also at an old age can come together and watch the show, which is so important.

BT: As you look towards the future of the show, what are some of your hopes for the series?

Anne with an E airs Sundays at 8pm on CBC and CBC Gem. Season 3 of the hit show will begin streaming on Netflix in January 2020.