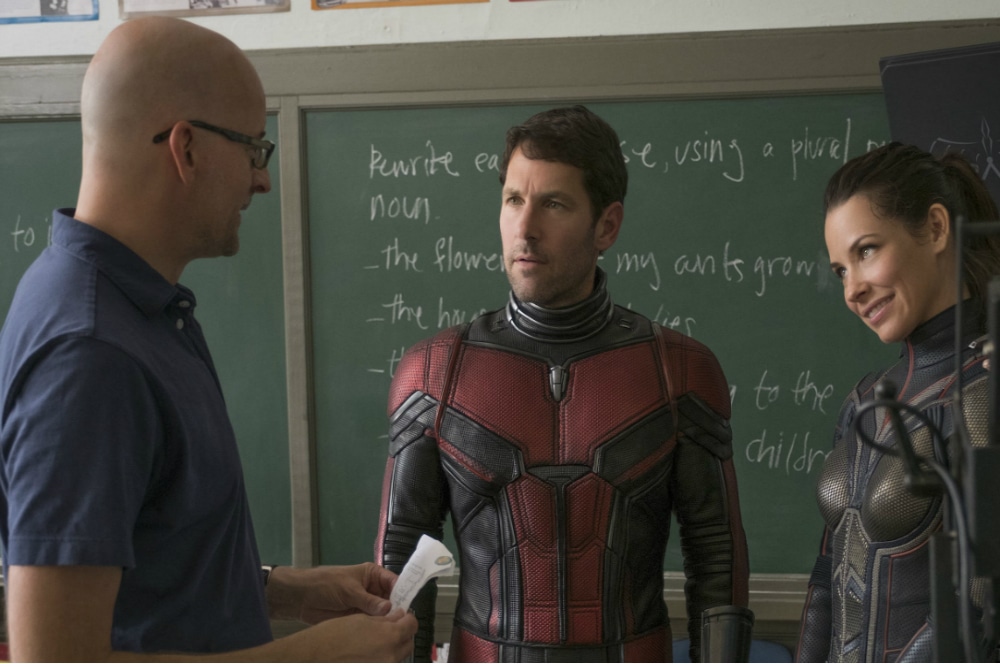 We’ve liked the director of Ant-Man and the Wasp, Peyton Reed, since his feature film directorial debut Bring It On. We were even bigger fans of his second feature, Down With Love, a cheeky satire starring Ewan McGregor, Renee Zellweger and Sarah Paulson, coincidentally this year celebrating its 15th anniversary. Therefore it was a huge delight to be personally invited to interview the talented Peyton Reed on the release date of his highly anticipated follow-up to Marvel Studios’ Ant-Man, Ant-Man and the Wasp.

The following is a condensed and edited version of our fun phone conversation.

Brief Take: I have to confess that I was obsessed with your film Down with Love when I was in my twenties. I made my boyfriend at the time learn all the words and all the dancing from the ‘Here’s to Love’ video. Plus I’ll readily admit that it’s a deal breaker for a potential friend or boyfriend if they don’t love Bring It On. All of this brings me to the fact that you’ve been a very passionate proponent for strong women, both physically and mentally strong, that is, far before it became a water cooler topic.

Peyton Reed: [laughs] Thank you much! I appreciate you saying that. It has been something that’s always been important to me in my work. I would definitely point to Down with Love and Bring It On as examples of that and even as we were doing The Break-Up with Jennifer Aniston, in telling that story and bringing both sides of that situation, by the end she’s strong enough to leave this relationship. It’s always been something that kind of felt natural to me. Also I think it shouldn’t feel like such a new idea. One of the things that we talked about as we were watching things and getting inspiration for Ant-Man and the Wasp, I went back and watched some of my favourites such as His Girl Friday, It Happened One Night and The Philadelphia Story, even though they’re not romantic comedies. I was reminded that there’s this whole era of ’30s and ’40s studio movies where it was just the norm – that the female characters were incredibly well written.

BT: Exactly! And I love how in Ant-Man and the Wasp, the women are really the ones running the show and the men almost feel like the secondary characters, which is such a refreshing role reversal to see in both a superhero movie and a big studio movie in general. What was it like crafting that dynamic with Paul Rudd and Evangeline Lilly’s titular twosome?

PR: It was fun because it felt organic to what we were doing. It also doesn’t hurt to have a lead actor, Paul Rudd, who also as actor and writer understands that that’s the story we wanted to tell. I can imagine that there’s a version of some actor who would play Ant-Man who wouldn’t be comfortable with that, who’d say “hey wait a second! what are you doing??”. But that’s one of the reasons that Paul and I click so well is that he’s not that guy. Particularly in the context of the MCU, it seems fun and fresh in this story that’s about family and the generational hero story, it made sense. It also made sense with that dynamic between Scott and Hope because Hope is the person who trained him in the first movie and was clearly the person in the first movie who could have taken care of Hank Pym’s problem, but he didn’t allow it. There’s all this pent up ‘it’s about time’ feeling that’s inherent in this movie. BT: With Paul, I feel like your partnership is such a natural one because you both know and understand comedy. There were so many parts of this movie, from the physical bits such as Paul skipping down the steps in his oversized clothes, to Michael Peña’s truth serum segment, that had the audience laughing hysterically. What were some scenes that had you laughing while shooting the movie?

PR: Well Michael’s scene always gets me. Michael has this process of channelling this character, who’s based on someone in his life, and the positivity of that character is just infectious. So that’s always fun to watch. But it really was the thing that I promised Michael Douglas. I told him “we’re going to give you some jokes in this movie!”. He has a very specific plot function, but I wanted to give him some light moments as well. People have already accepted Paul Rudd as an action hero, so I wanted to cut him loose and make him funnier in this movie too. Then with Evangeline and I, early on we talked about how we wanted this movie’s incarnation of Hope to be very different. Obviously she’s the same character, but now she’s resolved everything with her Dad and now she’s become a hero, she’s finally gotten the thing that she’s worked so hard for all these years, but how does that affect her personality? It allowed us to bring in more lightness to her.

BT: Speaking of Evangeline, I really appreciated how she felt so real in this movie. Normally you see women in action films and their makeup is perfectly done or their hair is perfectly blown out, even after an intense fight scene. With the Wasp, her makeup was smudged and she had a ponytail for better ease of movement during those action scenes. Not only do we finally get a female action hero front and centre, but we also get a relatable one.

PR: Well I’m really, really happy you mentioned that because it was something that Evangeline talked about from the very beginning, it was a big pet peeve of hers. She said, “I hate it when a female character clearly feels like the product of a male writer or director, where they go through a whole fight scene and they look like they’ve just come out of the salon”. And this is all Evangeline – she embraced all aspects of her character but she also saw the practical and pragmatic side of Hope. I mean Evangeline lives on a farm, she’s a very hands-on person, and she wanted to bring that to this character. She told me “I want to sweat after I fight and I want my hair not to be perfect”, and even the style of the hair – you mentioned the ponytail – she said, “it’s got to be practical. That’s what I would do, I’d put it up in a ponytail so that it wouldn’t get caught in that helmet”. And she wanted to look flushed after the fights and have her face a little red. She was tireless in her pursuit of having that pragmatic side of Hope alive throughout the movie. BT: Just as we don’t get to see realistic female superheroes on screen, we also don’t get to see multi-faceted female villains either. Women who are strong but also are allowed (if you will) to be human as well, and Hannah John-Kamen definitely brought all of that to her role as Ghost/Ava. What first drew you to Hannah and what did you like best about working with her?

PR: I first saw Hannah on Black Mirror, the TV series, and was just struck by her presence. Then when she came in to read for the role, she put herself on tape, and she has such a striking look and there’s such a mystery about her look. So then when she read, she really did inform how we wrote for that character, because she had that great combination of the ferocity of that character, but also the hurt of that character. She played the pain and the vulnerability so incredibly well. When she came in, it became really easy to see that character and how she’d fit in to the tone of what we were doing, but also brought something really new to it. We also like creating, I hesitate to call her a villain, this antagonist whose origin was really tied in to Hank’s story and his past and this idea that he doesn’t really play well with others, and his ego issues, and maybe was an indirect result of that. Working with Hannah, I mean her physicality, she really moves and can fight. For me, it makes my job easier to be able to use the actor as much as possible. She just came with this positive attitude that there was nothing she wouldn’t do. She just threw herself into it, and again, for a director, that really meant everything.

BT: In addition to Paul, Evangeline and Hannah, this cast is just incredible, in terms of their acting abilities but also in terms of what they bring to their craft. Can you talk a little about working with Michelle Pfeiffer, Michael Douglas, Laurence Fishburne and Walton Goggins?

PR: To embrace the Hollywood cliché, it’s really a dream cast. Michelle Pfeiffer was my one and only choice for Janet, I mean as far back as the first movie, I thought that if I were to be able to do a second movie, I’d want her for the role. I mean Married to the Mob and The Fabulous Baker Boys are some of my favourite movies of all time. I just think that there’s nothing that she can’t do, she’s just incredible. And again, to get to work with Michael Douglas a second time? I mean I just love Michael! With Laurence Fishburne, to be able to have him play Bill Foster, I needed someone to have the gravitas to be able to sit across the desk from Michael Douglas and hold their own and have the audience believe that these two alpha males, they both think that they’re the smartest person in the room. Laurence Fishburne certainly brings that to the role. I also really liked the idea of bringing in, in true Elmore Leonard fashion, a street level antagonist with Walton Goggins. I’m from North Carolina, so a fellow Southerner just felt right to have him be this underworld character. [laughs] He’s not quite satisfied, he wants to rub shoulders with the bigger superhero types. Walton is someone who I’ve wanted to work with for a very long time, so I really was thrilled that we got the people that we wanted for the movie!

Ant-Man and the Wasp is currently available on Digital and comes to Blu-ray combo pack on October 16! 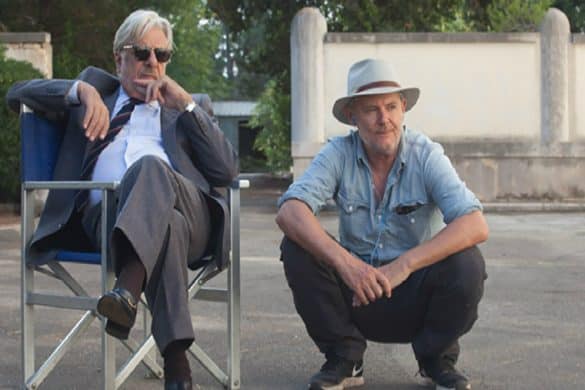