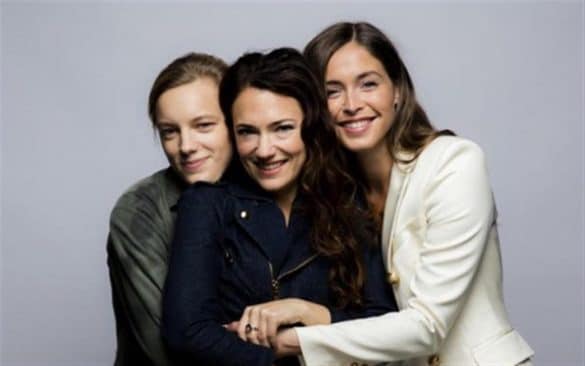 The film Below Her Mouth, which debuted at the Toronto International Film Festival in September and is now being released by Elevation Pictures in select cities just in time for Valentine’s Day, is notable for being shot with an all-female crew. The leader of the crew, April Mullen, has shot something that feels dreamy, ethereal and shimmery.  The film stars two actresses, Natalie Krill and Erika Linder, playing the roles of Jasmine and Dallas in such a way that there is plenty of intimacy on screen, which then heightens the reaction of the audience. After beginning with a discussion about not having to be on camera, we sat down with Canadians Mullen and Krill, & Swede Linder in an interview suite during TIFF, where we discussed the nuances of the film Below Her Mouth.

Brief Take: Is this the project that you had envisioned from the beginning?

April Mullen: The steady part with Below Her Mouth is that it was organic in terms of how it was created. The script was fantastic to begin with, and material that you don’t ever get to see or ever comes across your desk. Then to come across that material and bring it to life and then to find two incredible individuals to go there and be bold, and allow themselves to let go and connect on screen and let the audience in is something so special. So I think all of that just kind of snowballed and the results are what you see on screen.

BT: To what does the title refer?

BT: So it’s a little bit like the centaur? The animal Below and the human head? Reason vs. Emotion?

BT: Is the city meant to be Toronto?

AM: Yes, it’s Toronto for Toronto’s sake. Which is nice. That’s why a Swedish, multicultural…the city is very alive and frenetic and you come across so many different people every day and you can feel the city throughout the film and its personality, it has a huge personality in the film. We didn’t try to hide Toronto, we made it, it is very iconic, it’s really a part of that everything they went through.

EL: That night scene on the boat it was just so beautiful.

NK: Shooting on the Toronto Island was also wonderful. There’s a lot of hidden gems in the city.

AM: We can talk about the rain scene. We shot mostly night for night, so that kind of got a little chilly.

NK: Our first kiss was overnight, at five in the morning

AM: There’s nothing that beats real night for night. Sometimes the sacrifice is really worth it.

NK: It’s draining but it’s phenomenal. April was such a great leader for us because she was always so positive and resilient no matter what. It was a challenging schedule. It was Mercury Retrograde.

EL: But every day was so much fun though

AM: And with the all female crew we felt so supported. Everyone floated between departments and it was fluid, and strong communicators and everyone felt like we were on one team working towards one goal, and that was making them comfortable enough to let go.

BT: Had you ever worked with each other before?

(All laugh) EL: No. Now we’re inseparable and we’re like family.

BT: Natalie, when did you come on board?

NK: Well, it was April first, whom I met at my audition.

EL: I think…was I attached first and then you were?

AM: Well, yeah, pretty much. (Motioning at Erika) We found this one in L.A. and we had to find someone to match her extraordinary abilities and we found Natalie. Together they had unstoppable chemistry in their read. (Both actresses laugh).

BT: Was your character Swedish originally?

EL: No, she was Italian. So I was “How am I going to master this, this is interesting” and they were like “actually, just be Swedish”. (Laughs). I was like “I don’t even look Italian”. The film is such a real and true to life film, and it’s authentic, so…

BT: That begs the question…how authentic?

AM: Well, what do you think? It’s up the viewer.

BT: Well, you seem very close, so no matter the specifics or technicalities, there is authenticity.

NK: We talked through it and we talked through the script several times and how we were going to do the intimate scenes. That was always the main thing, the emotional connection between the two characters.

NK: Yeah, and that was the seed, the deepest root part of their relationship.

EL: Yeah, and I think that as the characters progress, we progress.

AM: When you’re swept up with another person, you lose track of time and almost feels like one moment and eternity all at the same time. If you could exist for all time in one moment, what would it look like? And it feels to me like it’s in that montage between the two of them.

NK: It is definitely heightened, as love and lust is.

BT: So should we just sort of let it wash over us?

AM: Yes! Like a journey. You just get to experience it. You just sort of breathe the film in. People leave the theatre feeling very open-minded and free and I feel like that is a very exciting thing when such strong content and people come in with a pre-notion of what it might be, you know, the way it’s advertised, or the way the poster looks, and I think they leave feeling awakened. Do you know what I mean?

People are geting more and more isolated so it’s refreshing to see something where the opposite can happen and people can get motivated to maybe make contact with human beings as well.