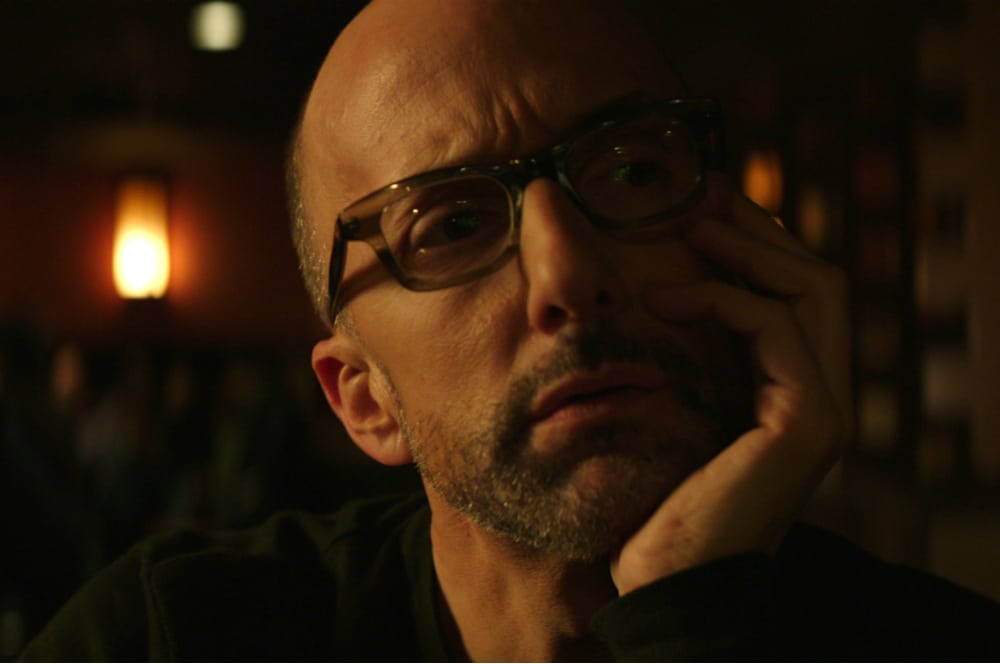 The opportunity to speak to Academy Award winning writer/director/producer/actor Jim Rash about his new fim Bernard and Huey (he plays Bernard), was one that we have been looking forward to for a while. We thoroughly enjoyed The Descendants, The Way Way Back, Thoroughbreds, and of course, some show called Community. Jim Rash may not immediately spring to mind as an older man who bed hops, but he pulls the role off successfully, and has a fair bit to say about this film and some of his other projects as well.

Here is an edited and condensed version of our fascinating conversation with Rash.

Brief Take: What attracted you to Bernard and Huey?

Jim Rash: When [director] Dan [Mirvish] approached me and I read it and we met for coffee, I had just come off of Community and if not, it was pretty fresh at the end of the sixth season, and it resonated with me mainly because it was a good departure after having played the Dean for six years. I think that you’re also looking for something that can break you away from certain things but despite that, you can’t help but bring yourself in the role, and I think that there’s many things about Bernard that resonated with me, or that were within me about neurosis and over thinking and all those other great things about him. [laughs] But I think that’s what attracted me to the role most, was an opportunity selfishly to be a large part of the movie in a lead capacity, but also to do something that was a departure, at least from the thing I had been doing currently.

BT: He’s not the most likeable of characters.

JR: That’s the other thing is that he’s highly flawed and his opinions, or what he believes, is who he is, and what that conflict is which I think is always very interesting, this really is a play on two men, Bernard and Huey, and places in their lives where they’ve hit their midlife moment of who they thought they were, or who they believed they were and who they wanted to become, and sort of grappling with that, with the guide of much smarter women in their lives. There’s such a unique likability in playing the Dean because he has such good intentions and now you have this guy who has some really questionable opinions about what it feels like to be a man, and he’s trying to date this much younger woman and consider himself one way and sort of having a mirror put up to him to tell him the opposite.

BT: The joke may be on him a little bit, though.

JR: I think you’re right. You are meant to be watching a little bit of a train wreck, in a good way. You’re watching him grapple, yes, and that’s part of the fun of it. Even though it was a super small budget movie, we fortuitously had a bit of time with the director at his house, David and I and a number of the cast to play with the scenes, and I think a lot of it gets discovered in that process. You’re watching your partner for the first time and trying to get some sort of friendship between two guys that is thirty years old, so with that comes a dynamic that they have well established. And a lot of work is done on the page. I can’t discredit what Jules Feiffer has written. He writes wonderful monologue moments of characters digesting life or relationships or themselves, so I think a lot of the clues were there as far as the approach.

BT: This film has many talented actresses involved, including Bellamy Young, Sasha Alexander, Mae Whitman, Nancy Travis and Lauren Miller, and yet is called Bernard and Huey. So perhaps your role is as a flawed mentor?

JR: One of the big themes is transitional figures, which is spoken a lot within the screenplay. We function as a bridge or a guide to this person into what might be their next relationship that might be more successful. For good or bad you were offered a lesson, and so I think that this is what is mentioned here of who is the transitional figure of whom and I think that a lot of these women are transitional figures for Bernard’s character, even though he would think it’s the opposite, in some ways. You’re always working on the actress’ level with these women who are all amazing.

BT: When you are writing and directing your own films, you also tend to stay in this avenue. Is this something that is conscious?

JR: Very much so. I’ve always enjoyed telling stories about flawed and fractured people. I mean we all, if we took ourselves apart, we could say “this, this and this are elements of me”. Whether you’re writing a comedy, a drama, or a mixture of the two, which is what I prefer, you’re coming from a place of context for these characters that might be painful for them. It’s like telling a story that was very traumatic to you as a child. And then you tell that anecdote now as an adult, and it takes on a humorous level, because you’re telling it from a different point of view or with context, or with time, clarity of why that happened to you, any of those things. So when I start to write, when it’s by myself or with my writing partner, it really does start at character. In order to really understand character, you have to understand what makes them the way they are, and usually if we are being honest with ourselves, who we are is linked to so many different things that happen to us, both positive and negative along the way.

BT: What was it about Community that resonated so much with people?

JR: I think what resonated with us for Community, other than Dan Harmon’s distinct voice and style, is that he created something with a genre breaking component. While we were always at the community college, and you had that sort of set that kept us in a familiar place, we would break genres, whether we were doing an action movie, paintball type episode, or [laughs] we almost have one that was like set in a Western, which was another paintball thing, or a play off type of movie. I think that was another thing that made Community such a pop cultural entity, if you will, pulling out pop culture.

BT: Thoroughbreds was also a great film. One of my favourite films of the year.

JR: Thank you. Cory Finley had a vision and brought that vision to life and I was so lucky to be a part of that. I feel like those are the things towards which I personally gravitate, things that physically or emotionally move me.