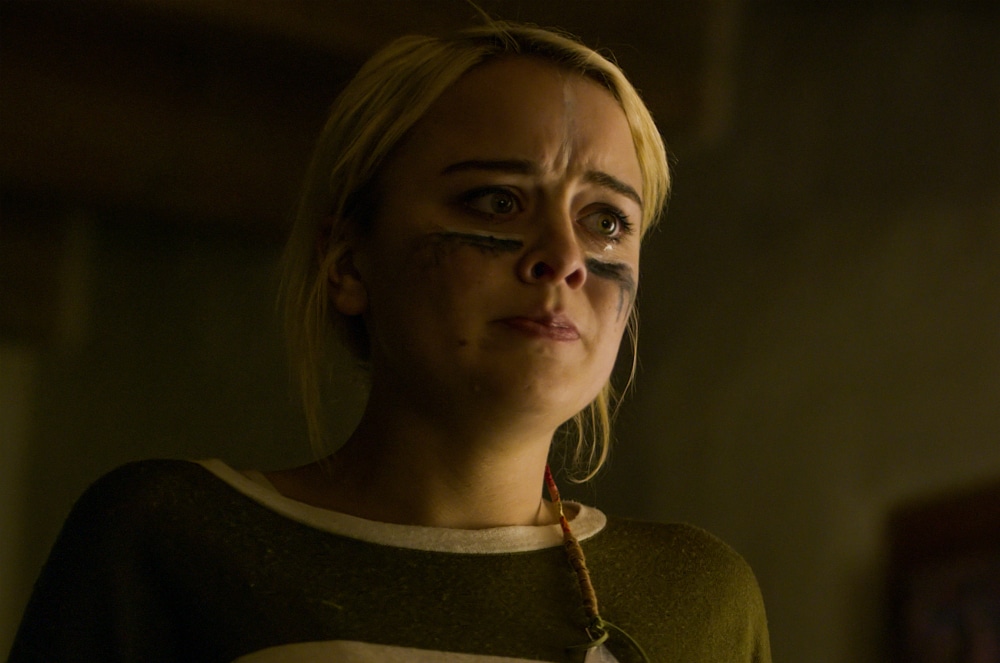 Beyond the Sky is a compelling film questioning the nature of alien invasion, and stars Jordan Hinson alongside Ryan Carnes. Her performance as Emily Reed is a fascinating character study. This year also featured Hinson’s writing and producing debut in the Peter Facinelli-directed Breaking & Exiting in which she also starred. Executive producing is on the horizon, and possibly directing as well, for the talented multi-hyphenate, who is perhaps best known from the Syfy series Eureka. We spoke to Jordan Hinson about Beyond the Sky. The following is a condensed and edited version of our interview.

Brief Take: Are you a skeptic or a believer?

BT: You sound skeptical of that answer.

JH: I’m just, kind of, of the belief that if we think we’re the only people in this universe it’s a little too closed-minded, you know? [laughs] it’s hard to chalk it up to that, when we don’t know what’s out there.

BT: At its core, Beyond the Sky is a film about love, empathy and compassion, which seems to be missing in the world right now.

JH: I agree, and there is a level of closed-mindedness, especially for people who go into a situation like that, because it’s so easy just to claim that these people are crazy, or that they are having false memory syndrome. We actually filmed in a real alien abduction convention so we got to meet people who had had experiences, so it’s just really interesting when you go into it from that position and keep an open mind.

BT: And you seem like a very open-minded person.

JH: I always try to stay as open as I possibly can toward people where I am not aware of their background. 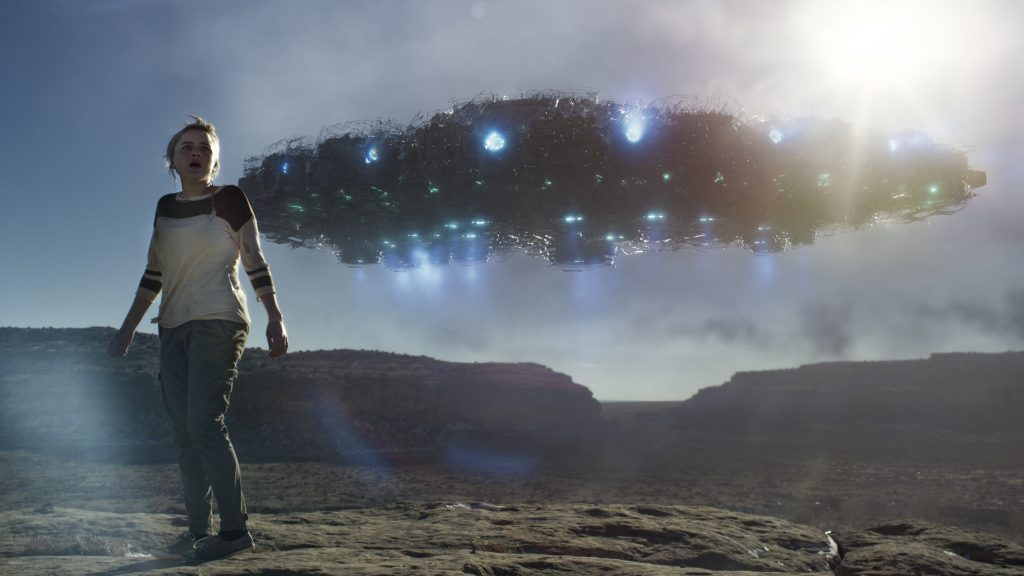 BT: You have a great amount of empathy, and this shows through how you treat animals.

JH: Yeah, I’ve always tried to. I’ve always kind of been that kind of person. I’m a massive animal lover in general, but I just recently adopted a one-eyed dog, [laughs] and he’s a lot of work with his medical issues, but he’s just so worth it! But yeah, I think that empathy is something you learn through life and I’ve just had the pleasure of being able to put myself into a lot of great experiences and see different types of people. I have animals, too, and I just ended up keeping most of the dogs that aren’t mine. I have to stop fostering. [laughs] I keep bringing dogs home that aren’t mine.

BT: One of your greatest roles is on Eureka, which is also sort of similarly themed. Do you see any parallels or are they separate?

JH: I guess that I could see Emily, my character in Beyond the Sky, having a little bit of Zoe in her. I think that Zoe was always an open-minded, bright character, which always drew me to her as well, and she was always surrounded by a skeptic, I mean, my Dad on Eureka was. [laughs] He was very by the book and close-minded, so he wouldn’t necessarily believe in aliens, but I think that Emily has a lot of similarities. I don’t know about the movie and the show. I feel like the show is more science-based and this is sort of looking at beyond what’s out there. I do think that sci-fi in general has always drawn me in.

BT: Do you like to explore science through your roles?

JH: Yeah, I’ve always tried to learn as much as I could through filming Eureka. I tried to pay as much attention as possible, because obviously my character was going to Harvard Medical School, so I knew something. [laughing] But I am definitely drawn to the whole outer space, alien aspect, that’s always been something that has interested me. 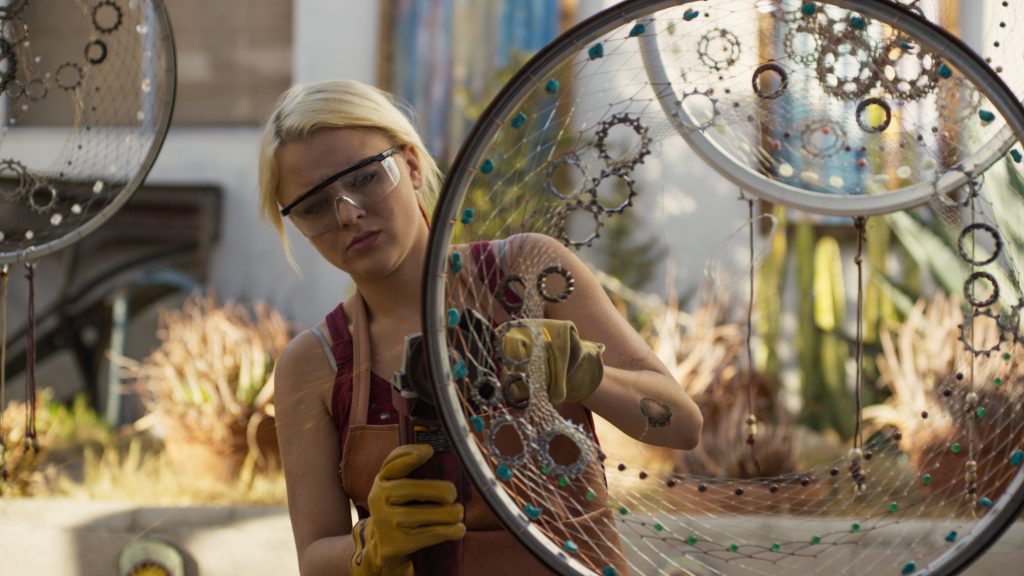 BT: You certainly look different through your appearance and presentation.

JH: Yeah! Well, I wanted Emily to be believable in how deeply involved she was in that culture and how she grew up there and surrounded herself with those people. I just thought that anything I could do to make that as believable as possible, that I was going to do it.

BT: You got to be a writer and producer for Breaking & Exiting, what was that experience like?

JH: Oh my God! I was just talking about that, because it’s one of those weird things in which you’re an actor and you’re given a script, and you show up the days that you are told to show up, and then you film and you do the best possible job you can, then you’re sent on your way. And sometimes you don’t even see these movies for a year or two or three years, and so being a producer, you’re involved every day in the decision making. And a year went by of us shooting it, and I was like “wait, it’s been a year?” [laughs] Because it didn’t feel like it! You know, I’ve been working on it the whole time. But there’s just something so rewarding about seeing it at the end of the day when you put that much love and time and dedication into it.

BT: That will likely be avenues that you will continue into the future.

JH: Yeah, it’s going to something that I’m definitely going to continue to pursue because I would also love to get into directing one day, too. Hopefully something that I write that I’m not as big of a character in, because then I will have the time to devote to it, but it’s something that has always interested me. And I think that being a woman in film, it’s really prevalent right now and we have something great to prove. So I would love to do it.

BT: Beyond the Sky is at its core about empathy. Do you feel like these stories need to be told right now?

JH: Absolutely! The movie that I wrote was about empathy as well, and it was about caring about someone other than yourself, especially someone struggling with something as serious as suicide. This is about a girl who is going through something really tough and nobody understands it. And I feel like there’s a lot of people who don’t talk about what’s going on inside them and they end up feeling alone in the process, which leads to a lot of the mental illness that we see so often. So I do think it’s super prevalent, and I do think people can watch these things and hopefully realize that they’re not alone.

BT: What can people do in terms of prevention?

JH: The best thing you can do is talk to the people that you know. If you see someone, say something to them, because most people are struggling with these things and they don’t feel like they have anyone that they can talk to. So it’s great to share this stuff and provide people with a hotline and work with an organization as much as you can. The best thing you can do is just be there for these people. Because most of them are going through something that’s so dark that it’s almost impossible to understand it. And I find that most of them don’t have that outlet to be able to speak to someone and really convey how they are feeling.