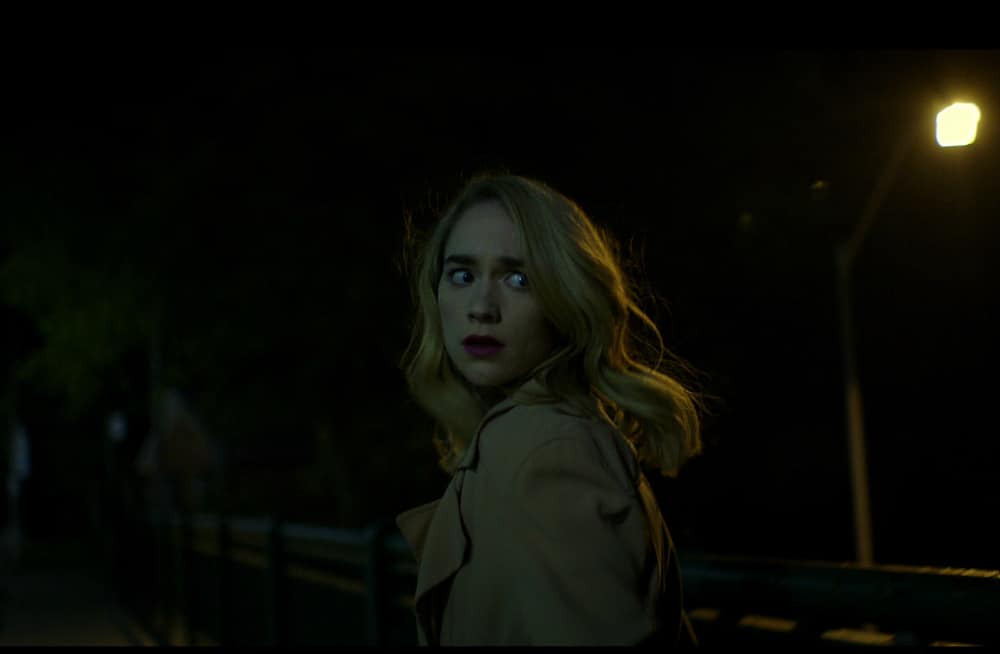 Birdland’s Melanie Scrofano is very prompt with her phone call from Calgary, and in addition, leaves a very lovely message on my answering machine (I somehow managed to get caught in the blizzard when she was about to call). In addition, Scrofano was absolutely the ideal person with whom to chat, personable and very forthcoming. She had yet to see the film, and was interested in reading my interview with director Peter Lynch. Of course, I took the time to ask about some of her current projects.

Here is our condensed and edited version of our conversation.

Brief Take: In this film, you look a lot like your co-star [Kathleen Munroe].

Melanie Scrofano: *pauses* I think a few years before I met Kathleen, my family in Vancouver had emailed me and complimented me on my work on a show I was not in. *laughs* I looked it up…and it was Kathleen. Like they thought that she was me. So it’s sort of really funny that people have always thought that we have a pretty similar look. So it played really well and it was a really interesting layer that was added to the film that we just happened to really resemble each other. So sometimes people didn’t even know which one was which on set. And when you watch the film, it helps her turn into Merle more believably.

BT: You shot the film a while back and obviously a lot has changed. Do you think of it as a different time?

BT: How does this relate to your charity initiative to Erase the Hate?

MS: I think that for me, and I can’t speak for the entire initiative, but for me, to Erase the Hate is that we all walk through the world with Pollyanna glasses on and pretend like nothing’s wrong. For me, the opposite of hate isn’t love. The opposite of hate for me is understanding. Right now, it’s very black and white. It’s one side or the other side. I think it’s important not to try to change each other’s points of view, necessarily. It’s to try to hear each other’s points of view and the other side, so that we can open up a dialogue rather than just yelling at each other. It’s about opening up a discussion and seeing the other side as a human, and seeing the other point of view. And from that point, we can start erasing the hate.

I don’t know if it’s because I’m an actor, but I’ve always tried to take the other point of view. I am human. I’ve failed a lot. But it’s easy to just go “what an idiot, I hate that guy” or whatever, instead of slowing down. I do definitely try hard to see people as a full story, instead of just a sound bite. I think, too, that we expect too much of people. It’s too much to say that you’re not allowed to be prejudiced a bit. I think what’s more realistic is “okay, you’re prejudiced”, now how do you act on that, because there’s a way to act on it that will hurt people, and there’s a way to act on it that’s more healthy and understanding. I think that for me is the message.

BT: I won’t ask you about season three as you just began shooting, but Wynonna Earp is contributing so much to the dialogue in seasons one and two.

MS: Listen, in season one, our goal was to tell a story about a specific world and a very specific girl. The fact that the story was written with such heart, is what people connected to. The message behind Wynonna was just…it just led itself into what you were talking about so naturally it was just…she’s not accepted for who she is, it’s about finding identity. Especially in season one, it was about not just Wynonna but other characters as well finding their place in the world and struggling with identity, and it still is that. I think it just lent itself perfectly to the conversations that are happening now.

BT: Did you have a moment when you realized the show was becoming such a dynamo?

MS: I think once it started airing and we saw the Twitter response. We thought we’d be alone on Twitter, just tweeting to ourselves, and that was fine with us. Listen, we love our show and we love each other and we were excited to see the show as a whole, so I think the fact that other people responded to it and got it and understand it…there’s something so powerful about the fact that the cast and crew love the show, then we can bond with other people that love the show. If we didn’t love the show, I don’t think we would have a Twitter presence and the fanbase that we have, because it’s a coming together of a bunch of passionate people that is what made that sort of explosion of love for the show.

BT: What about Letterkenny, to switch gears a little.

MS: Letterkenny is such an interesting show because at this point, listen, the way they shoot, it was so fast and they shoot an entire season in a month. You have to be smart, and you have to be ready and you have to be prepared and you can’t not love your character and you can’t not love the show because you just won’t perform. It’s such a specific show and written from such a clear point of view, that you either get it or you don’t. So everyone on the show gets along and we all make each other laugh and there’s a very generous spirit on that show as well. I think that again, that’s what makes it fly, I guess more than it should based on the budget and everything. Both of the shows that I’m on, what they lack in budget, they make up for in passion and that’s what is making these shows such big successes.

Birdland opens at the Imagine Carlton in Toronto on January 26th. The film will then play at the Globe Theatre in Calgary and Rainbow Cinemas Golden Mile in Regina starting February 9th, and at Cinemateque in Vancouver on March 6, 9, 11 and 17.  Birdland will be released simultaneously, January 26, 2018, on VOD in Canada and the US (Amazon, Google, iTunes, Xbox as well as Vudu in US only).