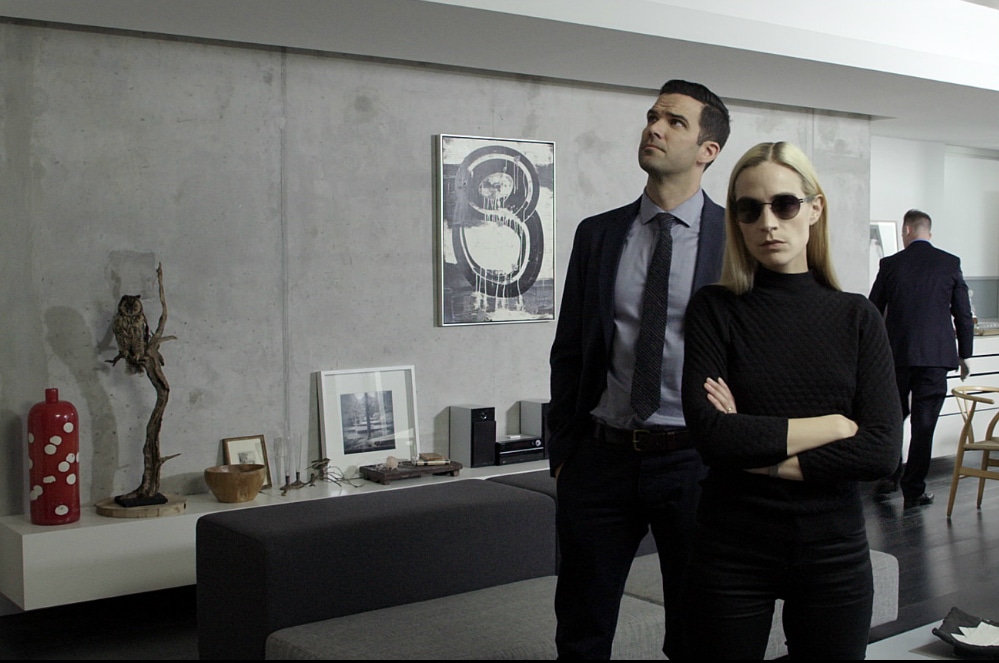 The highlight of talking to Peter Lynch, the director of influential documentaries and now the surveillance-era “neo-noir” Birdland, is getting to sit down and talk with him in the first place. Getting to the set-upon interview location of a midtown apartment space is complicated by the first heavy snowfall of the year but once we arrived, Lynch was instrumental in explaining the multilayered Birdland. Then once we warmed up over some tea (and how long ago early December feels now!), Lynch shared some fascinating details.

Here is a condensed and edited version of our conversation, which is part one of a Birdland interview series.

Brief Take: What is the difference between working in the documentary style and a film like Birdland?

Peter Lynch: Actors are just as cagey as…they’re people, right? So they bring all their baggage with them to the set. Their fears, their desires, or aspirations, their vulnerabilities, and so even when they’re trying to immerse themselves in another character, that bleeds and comes out. And so, in a sense, I don’t really spend much time delineating, other than I’m looking for the veracity of truth, in terms of the real drama. Let’s say in a documentary, you’re going to see what’s going on in truth of some sort. But I’m more of a storyteller, so my documentaries are more character-driven, they’re less about the facts and more about telling the story.

BT: What did your actors bring to the process?

PL: Many of the actors came on board late on the project. I was more interested in their intellectual…not just their look, but their grasp of the script, that’s what attracted me to them, so rather than have them perform and improve their work, I sat and just talked to them about the script, and that’s what convinced me more than anything else was their response to the material. But each one, the look and even dyeing someone’s hair blonde has different connotations and changes the way the baggage, the cultural baggage, the iconography, the clothing they wear, we wanted it to be kind of classical, but we wanted an edge. The woman who does the hair, Chanel [Croker], she’s been doing The Weeknd videos. But she went for something also neo-classical. For example, Cara Gee, I sent her a lot of old noir movie clips, and she confessed to me after, and now it totally makes sense, is that the way she had this aside to Tom and the whispering and the way she projected her sexuality and tragic sort of sense, that she was riffing on Marilyn Monroe. Birdland is not plot-driven per se, it’s more character-driven and it’s more about abstract ideas. It spins on the thematic elements of the pulls of sex and death. It’s more of a psychological portrait and that is what the actors helped me to create.

BT: What’s interesting is that two of your actresses, Kathleen Munroe and Melanie Scrofano, look so much alike in the film.

PL: At first, the film’s starting off in the shadows. Sheila Hood (the detective)’s following them [played by Munroe], whose husband she believes is having an affair. At first it’s hard to distinguish between Hood and Merle, the woman that died [played by Scrofano]. So I thought “that’s interesting” and I decided to push that further, that I even noticed people on set getting like the makeup people and drivers: “who’s who?”. People were saying how much they looked alike when they were getting their hair done. Myself, I couldn’t see it. That ambiguity puts the audience in a state where they have to find their own agency. The audience also project a little into Merle, the blonde character. I think everybody’s projecting their desires onto her. She’s a mystery and Hood becomes even more obsessed with her. Not only does she look like her, she tries to follow her own fetishes, sexuality and that sort of curiosity, almost trying her on for size in a way.

BT: Also a classic noir trope, that of the double.

Birdland opens at the Imagine Carlton in Toronto on January 26th, with screenings at 1:40 and 6:40 pm