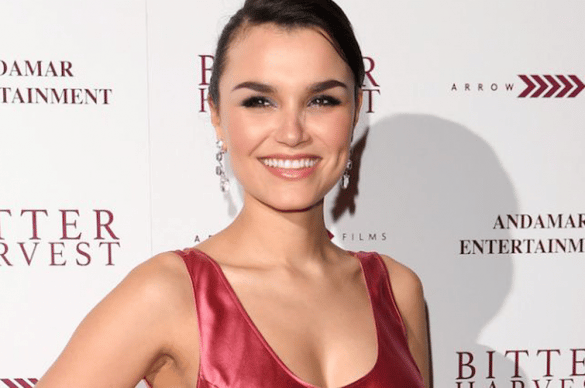 When I was growing up, one of the fictional characters that I held dearest to my heart (and related to most) was Les Miserables‘ Eponine. As a book nerd and, even more so, as a HUGE musical fan, I wore out my Les Miz cassette, because that’s how often I would blast “On my Own”, fashioning my very own newsboy cap in my small bedroom. Beat that, Joey Potter. Now, years later, I’m still that Broadway fan, longing for a Marius of my own to hold me…but I digress. When I was offered the opportunity to speak with Samantha Barks (who played Eponine beautifully in the film version of Les Miserables), naturally I jumped at the chance.

In the upcoming film Bitter Harvest, the award-winning star plays Natalka, a strong-willed, independent Ukrainian in the 1930’s who suffers through one of the biggest genocides of the 20th century. We spoke with Barks on the phone from New York (where she was in the middle of a press day promoting the film) and here are the conversation highlights.

Brief Take: Tell us a little bit about Bitter Harvest and the character you portray.

Samantha Barks: The film captures an incredibly tragic moment in history for the Ukrainian people. It’s about the Holodomor, which translates to death by starvation, which was inflicted upon them in 1932 to 1933. Stalin basically upped their production and took away their food, and it’s believed that between 5 and 10 million people, we don’t know the exact figures, died. It was kept completely from the rest of the world and it was only in 1991 that the full extent of it came to light and the world started hearing about it. It’s incredibly shocking for people to have not heard about it for so long and it was on such a huge scale.

As far as my character, there’s a love story that runs through this great tragedy, and I play Natalka, and my husband in the film, Yuri, is played by Max Irons. Our love story, and a lot of the things that happen to us in the film, are real accounts from people we’d heard from -parents, great-grandparents- their ancestors went through this ordeal. It’s a big pressure to get that right and to tell the stories of those whose voices were lost.

BT: It’s certainly a harrowing film to watch, to learn of this mass genocide that’s been kept secret for so long. What sort of research did you do before going into production?

SB: Well I didn’t know about the Holodomor, and neither did anybody that I spoke to initially. So I delved straight into it to try to figure out why I didn’t know about it. The fact that it was kept such a secret is such an evil. Our director George [Mendeluk] was so passionate about the Ukrainian culture and history, so he was an amazing person and resource to have. He was such a fountain of knowledge about Ukraine, and that really helped. Also we shot the film in the Ukraine so that real authenticity was very special. The crew were Ukrainian and to hear accounts from them, that people from their families had stories to tell from the time period. That lended itself to authenticity and I think the film needs to be authentic in order to honor the real truth of the story.

BT: You mentioned that your leading man in the film is Max Irons but you also have a few scenes opposite the legendary Terence Stamp. What was it like working with them?

SB: Amazing! To work with Terence Stamp is quite an incredible thing. He really is a legend! I mean the stories he has are just fascinating. To hear him talk for hours and hours was astounding. For instance, I really like baking and he was like, “Oh I wrote a cookbook years ago”, and I was like, “What?!?”. He’s really lived in so many ways and it’s a great honor to get to work with him. For me and Max, our story in the film is that we’re split apart for a long period of time, so we’d meet at the end of the day in the makeup trailer and we’d share all the stories of what happened that day. We’d both want to know how each other’s days went, how the scenes looked, what was it like, and it was just so exciting to hear everything that he’d been doing.

BT: Congratulations on your self-titled album that was released in June! In honor of the lead single, Troublemaker, were there any troublemakers on the set of Bitter Harvest?

SB: *laughs* Because the subject matter was so incredibly sad, everyone tried to keep each others’ spirits up, but there were no naughty people. It was a well behaved set.

SB: I’m about to do a one-off concert of Honeymoon in Vegas at the London Palladium with Jason Robert Brown [The Last Five Years, Parade], which I’m really, really excited about because he’s a big hero of mine. Then I also have a film coming out this year called Interlude in Prague, where I play an opera singer. I trained in opera for that role and it’s an intensely difficult thing. I have profound respect for opera singers because they’re like vocal athletes. They’re just incredible. So I have a lot of different things coming up. I’m excited.

Win a pair of tickets to see MDFF Presents MALGRE LA NUIT at The Royal in Toronto!

Interview: Before I Fall’s Zoey Deutch and Ry Russo-Young