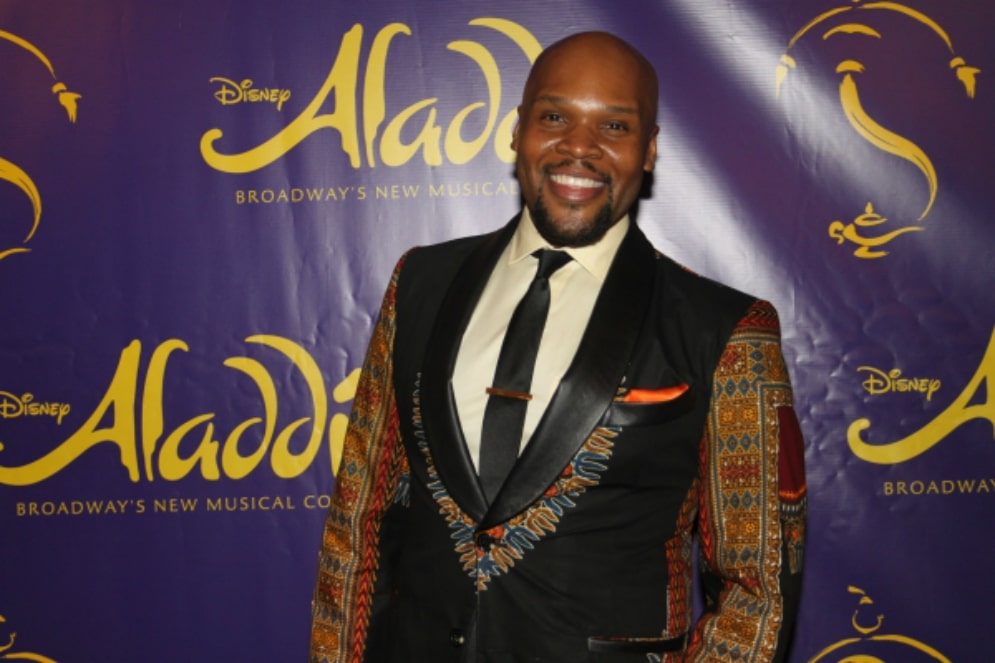 Michael James Scott is such an amazing performer that it was almost fitting that we caught him after a performance of Aladdin on Broadway in which the charming star plays the Genie (and getting set to do it again, as it was a two show day).  And we’re about to see a whole lot more of Michael James Scott on Black Monday, as the last two episodes shine a spotlight on his mysterious limo driver character.  Scott talked about practically everything in our fun interview but he was ambiguous on what to expect in those episodes, so tune in to find out!

The following is a condensed and edited version of our interview with the fantastic and very easy to talk with Michael James Scott.

Brief Take: Black Monday is such a funny series and it’s as much about the 80’s as about right now.

Michael James Scott: Exactly, which is really great, so it makes all of the costuming a lot of fun. You know, it’s so funny—I grew up and I was a kid of the 80’s but my scene was in the 90’s, so it’s this really interesting thing of I look back on my photos and stuff and to sort of re-live that is so cool. What’s so great about the show is that obviously they go way into it, and you really feel like you’re actually back in the 80’s with all of the props and everything, so it’s really kind of fun. There are a lot of things which you kind of forgot about, that you’re like “Oh my gosh, that’s right, that was in the 80’s!”. And it’s really fun to sort of re-live those moments.

BT: Did you get to work with some new people on the set of Black Monday?

MJS: So Andrew Rannells and I go way back—we actually did Jersey Boys years ago and then we originated the original company of Book of Mormon together as well. So it was so incredible to do it with Andrew. Andrew is a very good friend and he’s amazing on the show as well. And everyone was really welcoming with open arms—Don Cheadle was incredible, Regina Hall, everyone, Paul Scheer, they’re all such amazing people, you know, obviously actors as well. Just as people too, they make you feel really comfortable, and same with the showrunners and the creators. Everyone on the team was so welcoming! So you feel like you were friends with them before, which was really cool.

BT: Let’s talk about The Book of Mormon. You played the Doctor, right?

MJS: Yes I was. My mom was very proud of the line that I said on that show. [laughs] It was so much fun, and the first time when that happened, I was in the studio and Trey Parker came up to me in the studio and we tried it, he came up to me and we didn’t tell anyone and he wanted to me to say that and he was like “You’re okay with that, right?” and I was like “Sure, why not?”. [laughs] So it was a fun surprise for the studio the first time that it happened, that sort of shock factor. And it stuck! When somebody’s a genius like Trey Parker and sort of throws that to you, you’re sort of like “alright! Let’s just go for it.” [laughs]

BT: And now you’ve been getting rave reviews for Aladdin. Would you say that you’ve played the Genie longer than any character?

MJS: Yes. This is the longest I’ve done a role, which is crazy! It was sort of off and on because in the midst of doing Aladdin, I did Something Rotten! on Broadway. And that was sort of lovely to have the director and choreographer Casey Nicholaw do the same show. He kind of took me away and brought me back. [laughs] It was really cool. I think that what’s great about playing the Genie is that it’s one of those iconic roles that everyone wants to love, like they want to love the Genie, you know? Once you get over the feeling of having big shoes to fill with a role like the Genie, I feel like you have to be the most authentic you to play this kind of a role. It’s a role full of heart and love and light and laughter, and it’s an amazing sort of thing to strip away any barriers you have and live in the love of it. It’s been the most challenging role as well, because you do everything and the kitchen sink in the role. [laughs] Figuring out the pacing and all of that is an incredible challenge as an actor, but I think that the heart of the role has been one of the most incredible things. And because people want to love you, they want to love the Genie, they’re excited to see what the Genie is going to do. 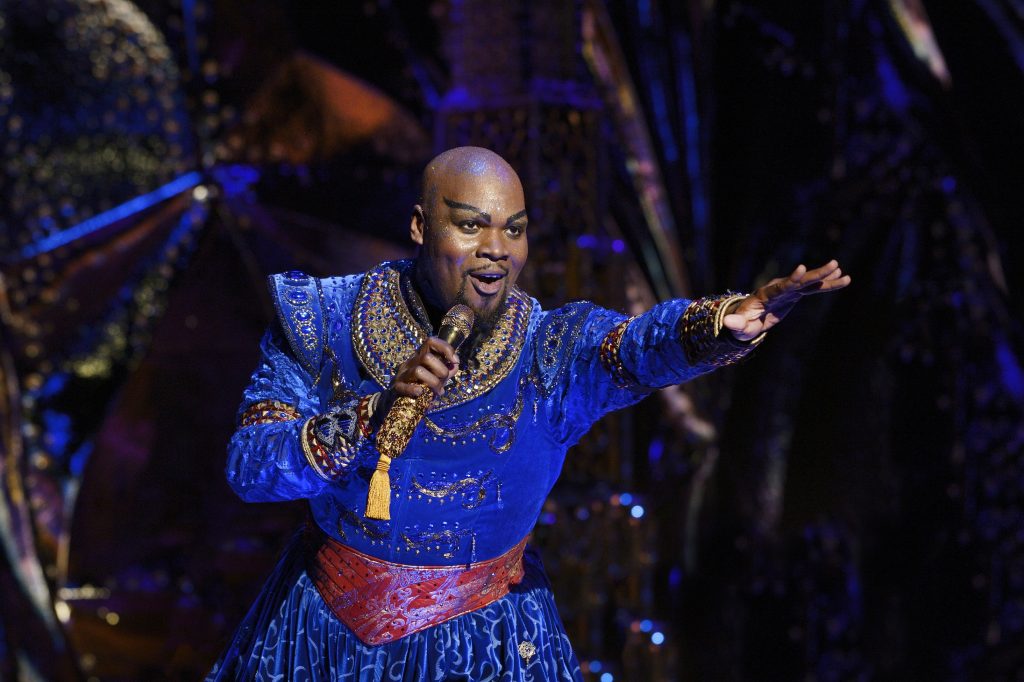 BT: What’s your favourite song from Aladdin to perform?

MJS: Although ‘Friend Like Me’ is wonderful and an incredible number, there’s a number in the second act called ‘Somebody’s Got Your Back’. It’s this old-school throwback to the soft-shoe style and I just love it. It’s such fun to do, and it’s like old-school Fred Astaire and it has this kind of “cool cat” feel. I love doing that number, it’s amazing.

BT: How do you feel about the live action Aladdin with Will Smith playing the Genie?

MJS: It’s obviously a very exciting time for the Aladdin brand. And on Broadway of course we’ll welcome this new cast from the live action into the big Aladdin family.  I don’t know much about it, but it obviously looks very amazing from what I have seen and very exciting. I’m really looking forward to seeing it and hopefully getting to meet quite a few of them when the movie opens.

BT: How much do you feel comfortable sharing about yourself on social media?

MJS: At first I didn’t know how much I wanted to put out there and share. But then I realized that if I want to stay true to myself and I want to live that sort of praise, that it’s important for me to share on social media because I think that it can be a really positive platform. There was not a lot of “me” growing up, and so if one person can look at me and see themselves, if they can see something in me that helps them – whether it’s being comfortable with who I am, or trying to live a positive life – then I am so okay with that. That makes me want to share in the social media world who I am and what I’m doing.

BT: Have you ever completely lost it on stage?

MJS: Oh yes. Absolutely. I worked with Josh Gad, we were in Book of Mormon together, and he is… [chuckles] so evil, he tries to get you on stage. [laughs] It’s so much fun to be on stage with an actor like that but it’s also so challenging because you have to keep it together. [laughs] It can be distracting but that’s the fun of it. With someone like Josh, you get off stage and you shake him, like “Oh my God!”. [laughs] It’s really fun to work with someone like that. He’s hard to get on stage, but he’s so good at getting people, like he’s a master at getting them on stage.

BT: What do you bring with you as your sort of leading principle?

MJS: Honestly, I think it’s the openness. Even though it’s kind of a cliché thing, just remembering that this is such a privilege and I don’t take it lightly that I get to be an actor and an actor who is working. So I think it’s just saying “yes”—it’s showing up and being nice. Those little things that you take with you going forth, it’s not forgetting the magic of it all. For me, this is something that I will continue to keep in my heart. The Genie has brought that all to light for me as well, because there is this wonderment in him…he’s like a big kid. And I think that the “big kid” of it all will take me far in this business, if I stay true to that. Stay true to myself and stay true to the magic of it all. I think that part of it is something which I’m going to hold onto.

Black Monday airs on Sundays on Showtime and Crave at 10/9c. Aladdin is currently running on Broadway. To find out more and to get tickets, click here