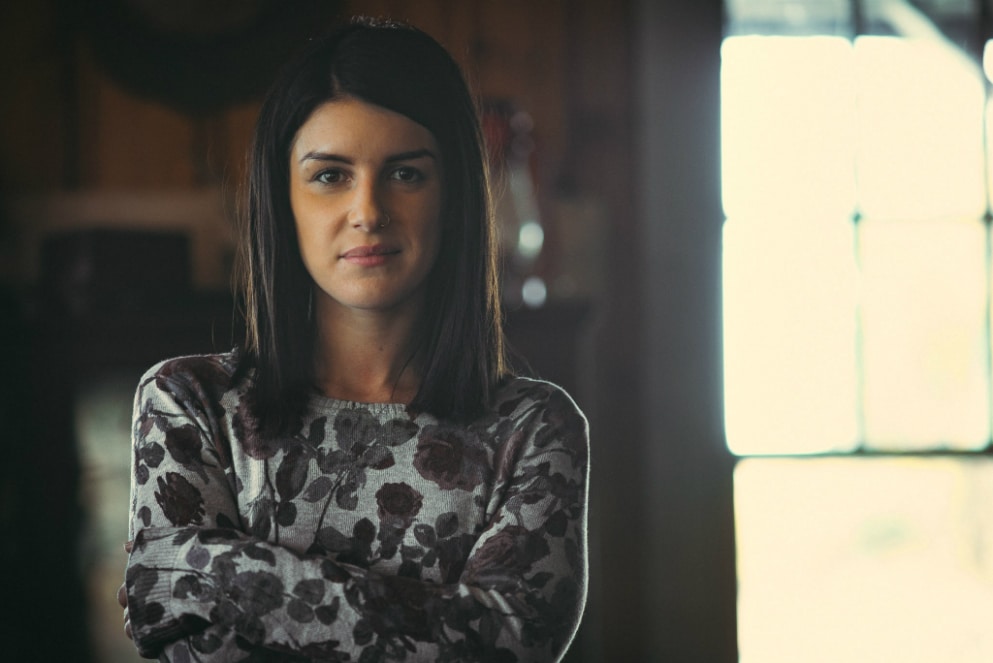 Blood Honey is a Kubrickian thriller about Jenibel (Shenae Grimes-Beech), a psychologically scarred young woman who returns to her family’s secluded hunting lodge to care for her siblings and ailing father. Set to inherit the bulk of the family’s estate, Jenibel learns of a horrific plot against her and finds herself stuck in a life-threatening nightmare, where she must struggle to survive.

Best known for her starring role as the winsome Annie on The New Beverly Hills 90210, and soon to be seen on CTV’s gritty drama The Detail, Grimes-Beech gives a riveting, career-best performance in Blood Honey. We had the exciting opportunity to ask the lovely Canadian a few questions and the following is what transpired.

Brief Take: Congratulations on the film and your powerful performance in it! How did you get involved with the project?

Shenae Grimes-Beech: I got involved with the project when the script was sent my way via my agent in Canada, Amanda Rosenthal.  Psychological thrillers are up there as one of my favorite genres of film to watch and the mood board for the film’s imagery along with the script’s story had me hooked. I didn’t see the twist at the ending coming at all while I was reading and I knew it would be even more shocking for audiences, making it a fun story to bring to life!

BT: The film stars, amongst others, three beloved Canadian actors – yourself, Gil Bellows (who I interviewed a few years ago and he was such a sweetheart), and Don McKellar. In the film you have (to put it mildly) a frosty relationship with both of them. What was it like working with them and what was the best part of working with them?

SGB: I definitely spent more time working with Gil as he played my father in the film and I really can’t go on enough about what a special person he is. His cool, calm and collected demeanor just make you want to be around him and his ability to command a set and the way he unabashedly brings power and creativity to his performances each and every single take is mesmerizing. I loved to watch him work and he’s incredibly generous as a scene partner, constantly encouraging me and pushing me outside of my comfort zone. I really admire Gil as an actor and a person.  Don was always incredible to watch work. When you read a script you immediately bring characters to life in your head and what Don did with his character was completely different to how I envisioned him.  He made really interesting choices and it was cool to see his character come to life totally differently to how I initially imagined him.

SGB: When I’m in LA, I miss my family the most obviously as they are all still based in Toronto.  As for the city itself, where do I begin?!  I miss the shopping, the graffiti and east coast architecture, the nightlife, the music, the energy of the city, the seasons, the passion for hockey from professional level to local shinny games on frozen ponds, and the overall feeling that you’re part of something ultra cool and undiscovered. No one in the world gets to know just how f*cking cool Toronto is until they live there and explore like a local. When I’m in Toronto, I miss the sunshine.  Not just because it’s beautiful and warm and provides a year round tan but the sunshine motivates you to get up and moving and shaking. I feel guilty staying indoors in LA and I love to be busy so I love waking up to the sun every day and feeling like anything is possible! I also miss my house desperately when I’m in Toronto.  My husband and I just bought our first place and are finally starting to settle in and make it our own, which people can follow the progress of on my blog lostinlala.com!

BT: It’s obviously a very dark, twisted movie with a lot of physical, emotional and psychological abuse in it. That being said, what was your favourite scene to shoot?

SGB: I think one of my favourite scenes to shoot was one of the most physically challenging ones.  I was lost in the woods and hallucinating that the ground was swallowing me.  It was an indie film, which means little to no budget for special effects so all the stunts are happening in real life the good old fashioned way; lots of teamwork! I was freezing cold in a tank and hole-y light sweater and being literally buried bit by bit in a gaping hole in the ground in mid-October up north and laughing my ass off having a blast with the crew in between takes. Everyone really comes together in those moments to make them go as quick as they can while still nailing it for a common cause.  I was proud of us all for getting through that, especially our props department who dug the hole and tested it all out themselves before I got in!!!

SGB: At the moment, I’m focusing on getting back in my blog work and finishing up post-production on my new series, The Detail! The show is a dream come true for me as an actor in a lot of ways because my character is a young hot mess in her personal life (always fun to play!) and a whip-smart gun wielding homicide detective in her professional life (how cool and badass is that?!).. I cannot wait for existing fans and new audiences to see me in this role as it’s a major change from anything I’ve done before and something I’m very proud of.  On top of all that, the entire cast and crew has been an absolute dream to work with. I hit the jackpot when I booked this job and have thanked my lucky stars every day since!

Blood Honey opens in Ottawa on Thursday August 31st at the Mayfair theatre, on Friday September 1st in Toronto at the Cineplex Yonge-Dundas, on September 8th in Vancouver and September 12th in Calgary.

Exclusive clip from The Space Between!