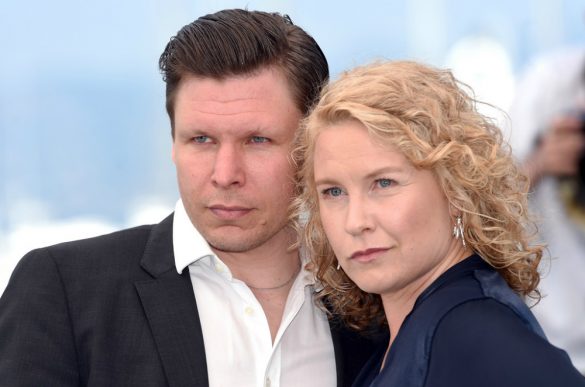 Border is a movie that we had designs on seeing all through the Toronto International Film Festival and since then the film has been selected as Sweden’s nominee for Best Foreign Language Film for next year’s Academy Awards. It has been described as this year’s Let The Right One In, but that description only gives a taste of what is revealed in this weird, wonderful movie.

During TIFF, Brief Take had the exclusive opportunity to sit down with the leads of Border at a high-end restaurant, while their film was playing right next door. We spoke to Eero Milonoff (who also appeared in The Happiest Day in the Life of Olli Mäki, and is Finnish), and Eva Melander, who is transformative in the film as Tina, a border guard and outsider figure. The film is a hidden gem and the following is a condensed and edited version of our conversation.

Eero Milonoff: Huge, yeah, exactly.  When we got the parts, (director) Ali (Abbas) asked from us how it would be to gain some weight. In the end, Eva gained maybe 40 pounds and me around the same, so we hear that it would be good for the characters, we needed it in four months.

Eva M.: And half of it in eight weeks. Too much! And bodybuilding, I was training from the waist and up four times a week, just bodybuilding, building this muscle. And so in the film, my body and yours are so compact and stiff, with overtrained muscles and fat.

Eero M.: I felt that I understood it when I came to set and after the shoot, that it was part of it, to go inside the role, even though I wasn’t thinking about it when I was training because it was so hard.

Eva M: I felt like my body took place in a new way, that really did suit the character. I felt like I was too big, and too big a person to fit in. I think that is what the character and people around her are looking at – that she’s a big person, not fitting in, and that helps, of course.

Eero M: Of course when it came to the prosthetics, it was four hours per day.

Eva M: Four hours a day to put on, and one to take off. I don’t know how I made it, you know? How did we do that, four hours of prosthetics, ten hours shooting, and one hour to take it off. And then just having something to eat in the car, going to your bed, and then get up again.

Eero M: One of the themes in the movie is the outsiderness and how we handle it and everything, how people behave against others. The prosthetics gave the feeling of outsiderness on the set. But when you would get up from the make-up chair and see the amazing job the make-up artist did, it’s like “okay, it’s worth it”.

Eva M: But it was such hard work. The first morning I woke up, I remember thinking “okay, okay, okay, it’s going to be a change”. Either I’m going to have the mask 24 hours a day, forever, or I’m not going to have the mask forever, and my mind couldn’t understand which one it was. And that really made me understand how it had affected me. I wore this mask for more hours in a day than not wearing this mask. That was pretty strange. In doing this character, I’ve always been interested in that, “What’s behind the mask?”.

BT: There is empathy missing behind the mask.

Eva M: Of course! That’s what I mean. But then you have to experience what’s the mask, and you’ll see a big difference.

Eero M: The thing that we have and that we want to give to each other is the love and empathy. But if you want to cover that, if you need to hide that because of our society, that takes preference to money and material objects and maybe not to outsiders.

Eva M: And cut out so many percentage of the human beings.

Eva M: Not to join Facebook. [laughs] It’s just that this social media world, which is not the real world, has become the real world. That’s the difference from before, the cyber world for many people is the real world. It’s hard to create your own space, but you need to trust in it.

BT: You must have had a lot of faith in this movie.

Eva M: I went with my gut, which I usually do. First I read the short story, Border, by John Ajvide Lindqvist before doing the casting, and I thought it was such a good story. And then I was thinking, “My God, if anybody could make a film out of this, it would be great”. And then I read the manuscript and prepared for casting and the scenes. I felt like it was a little bit different than the short story, but still, it blew me away because I had never read a manuscript like that. Those turns and where it goes, and this big picture is very metaphorical, talking about so many things – right now, and in the past, and our future at the same time.

So I was wondering who was going to make this, and when I met you [points to Eero] and Ali (Abbas) at the same time, I felt so comfortable. And I thought, okay, we are going to attack this material together, in the same way. I wanted to join this experience. We are also the kind of actors that have discovered the border in between ourselves, as actors, making characters for quite a number of years. How this world is run is making more and more desperate people, and when the world gets desperate enough, they will just go on their instincts.

Eelo M: Their dark instincts, I think, because all of us want to be seen and all of us want to be heard, and if there is no connection between human beings, if nobody sees you as you are, you’re going to be in very deep waters. We’re living in a strange world, strange times. We see a lot of these movies now that make you think, “What is my position in life, and what can I do with it?”.

Eva M: That is so important. You have to start with loving yourself, and when you’re on that note, you have to ask yourself, “what is important for me?”.

Border is now playing at the TIFF Lightbox in Toronto and is also playing in Montreal. The film will open throughout the fall/winter in other cities, courtesy of Mongrel Media and NEON.