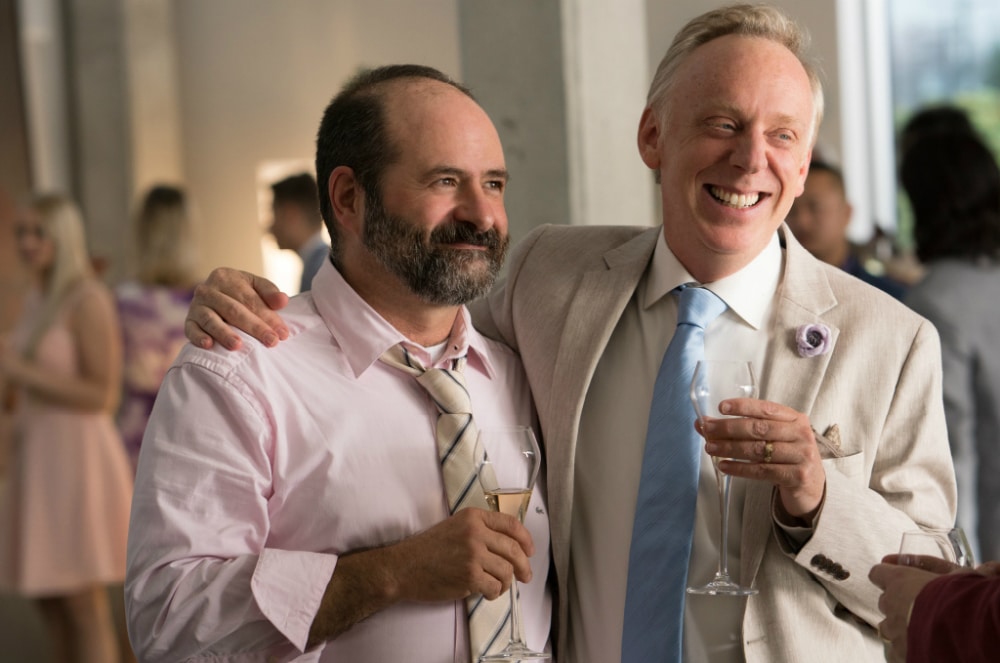 In writer/director Mike White’s Brad’s Status, Ben Stiller plays a man who seems to have it all. He’s got a loving, beautiful wife (played by The Office‘s Jenna Fischer), a musical prodigy son (Austin Abrams, The Walking Dead) and a successful gig at a non-profit organization. Yet Brad is miserable and, worse yet, constantly compares himself to his seemingly thriving friends from university (played by Luke Wilson, Michael Sheen and Jemaine Clement). In a social media obsessed world, fragile egos and how one defines their personal status are common anxieties faced by not only middle-aged men, but young women as well.

During the recent Toronto International Film Festival, we had the opportunity to sit down with Mike White in an intimate setting with local and international press members. The following is an abbreviated version of that conversation.

What was it like directing Ben Stiller, as in directing a director?

Mike White: It was intimidating. I said to Ben, “I know you have more experience than me so are you even going to listen to me?” *laughs* Actually he was totally mensch-y. The fact is he was so prepared as an actor and he understands storytelling. I’ve worked with great actors but often they see it from the prism of the actor, you know what I mean? He was definitely the first person I thought of when I was casting the role. I knew people would come into the film with a certain kind of expectation but then it was subverted. I was so impressed by Ben as an actor throughout the whole process of shooting the movie. When he first came on set he was so still and I was like, “Is this even going to read?”. It was very internal but a very intelligent, nuanced performance. I knew he was doing a great job on the day, but when I came to editing I saw how sustained and thoughtful the performance really was. I give him all the credit.

You said he subverts expectations, so how do you see Brad?

MW: I don’t think of him as a character that exists. He’s over when the movie is over. There is no Brad. But then again, to me, he represents a certain thing. That part of yourself that has insecurities and ego needs and compares yourself to others and comes up lacking in your own mind. I have that and I’m embarrassed by that side of myself. It’s not the cool side of myself that I want to project to the world. But I also want to have compassion for that person too. We have that side and it doesn’t matter if you have a lot of money or not much at all, you can still get into that mode of thinking. You see that he’s flawed but he’s still a loving Dad and, in the end, there’s still hope for him.

In the film it feels like a very male trait – that innate competitiveness.

MW: It’s funny because I’ve written a lot of female characters, in particular in a film called Year of the Dog, which is about a single woman who hoards animals, which is also me. And so previously, especially with Enlightened, I’ve had women come up to me and say that they connected with the characters. Now with this film, I’ve had middle-aged agents come up to me and say, “Oh my God, that was just devastating”. I think it speaks to a certain male person. I mean I don’t like to speak in generalizations but I do think that there’s something sad about a certain aged man who thinks, “What am I even useful for?”.

The film is about Brad but it’s also about his son, Troy. What do you hope the younger generation takes away from this film?

MW: Well I don’t know if it’s really there in the movie, but I remember when I applied to schools and went to school, I felt like my future was hanging in the balance. Then every person I would see on campus, my Dad took me, and he would act so gregariously and almost like a psychopath in the sense that he wanted to talk to every person he interacted with. The whole time I was like, “This person is going to remember this and I’m never going to be able to go to this school”. Basically what I liked about Troy is that he is grounded and he’s not the petulant teenager. I do think that what you get from him is that he’s just trying to survive with his Dad sometimes. I like that there was some wisdom within him.

Hollywood formulates this narrative in terms of what we’re supposed to be and when. How do you see your role in that?

MW: I mean now we have the Kardashians where people think they’re their friends and the only thing that’s important is shopping and flying on private jets. To me, that is the issue of the movie. Thinking that you need to lead this extravagant lifestyle and that’s the barometer of success. I think that’s personally crippling and globally destructive because if 7 billion people think they need to fly private planes everywhere, it’s just not sustainable. Not everybody gets to party like the Kardashians, sorry.

How would you describe your outlook on life?

MW: I’d like to think that I’m generally very happy, but I definitely have a Brad in me for sure.