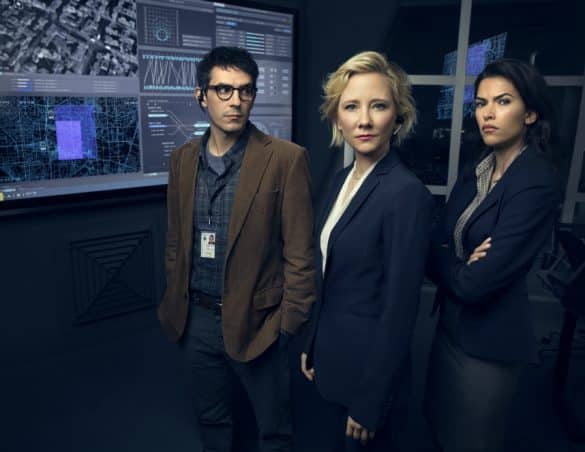 We first found out that Anne Heche would be playing the boss on The Brave during the Corus upfronts back in June, when we spoke to Mike Vogel who plays Captain Adam Dalton. We asked Vogel if his character has disagreements with DIA Deputy Director Patricia Campbell (Heche) and he said, “of course”. But finally getting a chance to speak to the actress via telephone, we could see how much respect the two actors have for each other, and how Heche takes her role very seriously as the leader of a team of military operatives going to different locations in each episode for the Global TV / NBC show.

The following is an edited and condensed version of our chat with the wonderfully outspoken Anne Heche.

Brief Take: When you do press with Mike Vogel, it’s probably very new to get to spend so much time with him.

Anne Heche: It’s so funny. I keep saying he’s the best co-star I never got to work with, but what we are a very close knit family. Because we don’t get to be in the field all the time, Sofia (Pernas) and Tate (Ellington) and me, I say, we’re the gophers, they keep us underground. I love ’em. But we do have fun days where we take a break and cook for each other, and sing for each other, and play cornhole and let go. I  mean we aren’t the people who do this in real life but we respect the hell out of them, and that’s why we’re doing this show. It’s also complicated to hold that intensity over eight days of shooting an episode and there needs to be a release. Because we are only the storytellers, the respect that we have for the stories we’re telling holds us in a very tight place emotionally. To get and keep the intensity for the audience by the end of the week, we’re like, “Oh”, and fall over into each other, like, “Did we really do that?” “Did we tell that perfectly?” “Are we as in sync with the troops as we can possibly be?” “Did we do it?” and everybody feels a celebration by taping one of these shows in one of these countries and saying, “Yes, we did it this week and in a way that honours the military. We did it”. And then we giggle.

BT: Can you tell me about your recent foray into a charitable initiative?

AH: I was doing the press tour for the opening of The Brave and I was in my hotel room in New York watching CNN. I literally got heartsick when I saw what was going on in Puerto Rico and I got sicker when I realized we did not receive the call to action, and I’ve never asked anybody for money before, and I thought, if I was going to do anything, I’m going to do something I’ve never done. I started a campaign on CrowdRise called My Next Check and My Next Check is a check in with yourself to see what you can give. And I have challenged Donald Trump to look at his next paycheque and see what he can give to Puerto Rico and he told us yesterday exactly what he could give.

I have been devastated by  that, as has every other human being I know who has a heart, and I am going to do everything I can to give money to Puerto Rico. Our cast will be having a fundraiser on the 23rd too. I’m motivated to help this world. This job has given me an opportunity to reach out and have people pay attention and I’m not going to stop.

BT: To tie it into the show is fascinating as well.

AH: We stand by what we say. Every single one of the members of my team, when I asked them if they would stand up for Cowboys 4 Heroes, and the rodeo honouring the military here in New Mexico a couple of weeks ago, every one of them said yes, within five seconds of me sending out a text asking for their help. Every one of my team members stands up for the military. We stand up, we do what we say. We are human beings doing what we talk about and we are not messing around. Every single one of them said, “I’m in, I’m in, I’m in”. We are a team that cares about this planet. I’m moved. I’m moved to know these people.

The Brave airs Mondays on Global TV at 10 pm. This Monday’s episode is rumoured to feature the death of a major character.