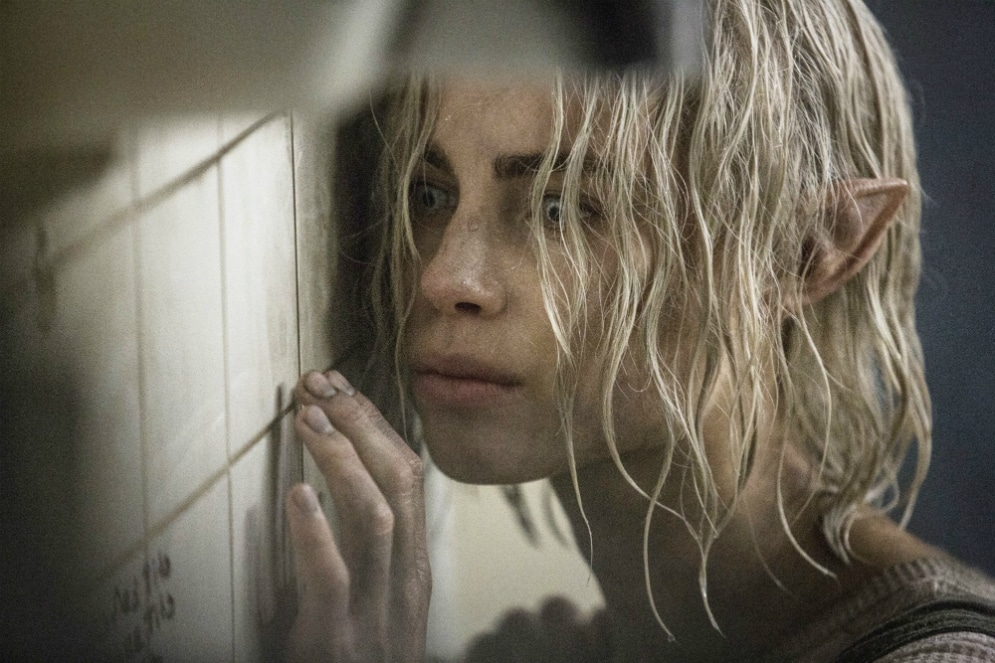 Up and coming Australian starlet Lucy Fry has played a mermaid, a vampire and now she’s adding to her otherworldly filmography by portraying the ethereal elf Tikka in the Netflix original movie Bright. Directed by David Ayer (Suicide Squad, End of Watch) and written by Max Landis (American Ultra, Mr. Right), the film uses the story of two Los Angeles police officers (one a human – portrayed by Suicide Squad alum Will Smith, and one an orc – played by Joel Edgerton) who must safeguard an elf (Fry) and her magical wand from a host of evil beings, as a thinly veiled allegory for the rampant racism and sexism in modern-day L.A.

We had the opportunity to sit down with the bubbly and down-to-Earth Lucy Fry in an intimate roundtable as she returned briefly to Toronto where she had filmed 11.22.63 not too long ago. The following is a condensed and edited version of that charming chat.

Tikka is such a mesmerizing force of nature. Can you talk a little about crafting the character?

Lucy Fry: I love the spirituality and the mysticism of elves. David is all about the real world – the gritty, the raw, the violent; going into the heart of darkness and finding the light there, which was such an exciting journey. As we developed Tikka together, I realized that she’s a little fighter. She’s in the trenches. She’s run away from a dark cult that worships the dark Lord and she’s come to this safe house where she’s learning to fight the dark elves with her magic. So she’s having a bit of a crisis of identity and a break down when she meets Ward [Will Smith] and Jakoby [Joel Edgerton] with her wand, and then it goes into this chase to keep the wand safe from the dark elves and the corrupt cops and the orcs. David would make all of that feel personal and real. In the end I had a lot of the spirituality of the elves come into the portrayal of Tikka because she has a huge heart and she’s fighting for equality and to believe in a good world and to believe that she can be good, but it all came from a very grounded place. Throughout filming he really pushed me. He knew that I would step up to the challenge so he really pushed me into the challenge of being Tikka and making it real for me. He kept me separate from the cast so that I would be nervous around them the way Tikka is. David was just so extraordinary because he wasn’t about telling you what to do on the day. He really wanted to build the character together.

What did you like best about working with your fellow cast members – namely, Will, Joel and Noomi [Rapace]?

LF: It was a life-changing experience working with all of them. They’re all so talented. Will, when he walks into the room he just makes everyone feel good. There was one night where we were shooting very late and it was cold and it was leading up to Christmas, and he starts singing Christmas carols to make everyone feel good. Just all night singing Christmas carols! And he can go from that to an extraordinary scene! And Joel, with the way that he had prosthetics on every day…it was 3 kilos on his head and he could still be completely realistic and funny. He’s so kind and so smart and so transformative, the way that he built the character with his physicality and his voice. His character is so earnest and you believe everything that he’s saying. The two of them together have the best relationship. And Joel was so good at making me feel less alien, because he’s Australian as well, and he said, “Oh you speak my language!”. And I loved acting with Noomi. She was so fierce and loving and beautiful. I was such a fan of hers from The Girl with the Dragon Tattoo and getting to be with her, she was so present. All of my dreams came true with this role.

You mentioned that Joel is a fellow Aussie but another fellow Aussie who’s having a big year, like you, is Margot Robbie. Have you chatted with her about working with David?

LF: You know, I still haven’t met her! I keep circling around her because I look at her almost like a big sister in the industry. She’s moved over to LA and opened all these doors and made it happen. She’s so good and so talented and empowered in producing films. I look up to her so much! When I was auditioning for Tikka, I was watching her in Suicide Squad and I was like, “Woah! If she can do it, maybe I can do it too”. So I’ve never met her but I really hope I can meet her sometime soon.

Are there any actors and/or directors that you’d like to work with in the near future?

LF: Cate Blanchett is a big role model for me. The way she transforms in her roles? Oh my God, she’s so good. I’d love to work with her and learn from her. But I love magical realism films, like Ondine and Pan’s Labyrinth. Oh my gosh, and The Shape of Water too. It’s so good! I’d love to work with Guillermo del Toro. He’d be such a dream to work with. I saw him in an interview at the Directors Guild and the way he speaks about actors and the kind of respect he has for actors is so beautiful. I’d also love to work with David again because he’s so brilliant.