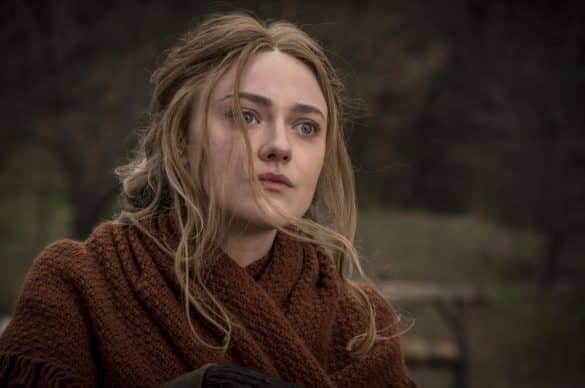 Dakota Fanning gives a really compelling performance in Martin Koolhoven’s searing Brimstone. We had the opportunity to sit down with the twenty-three-year-old actress at an international roundtable during the Toronto International Film Festival and were quite surprised at the intimacy and breadth of the discussion as well as the understanding we were given about Fanning’s creative processes.

Brief Take: You have two films at the festival – Brimstone and American Pastoral. Is it coincidental that the two films are so similar in tone? [They also are now both coincidentally being released and distributed by  the same company in North America]

Dakota Fanning: Well, you know what’s so funny? I think that they do, and so Brimstone  we shot in the summer, took a break and came back in the winter. And I did American Pastoral in between (chuckling) those sections, so personally the experiences are very connected for me. So it feels fitting that they’re both at the festival at the same time in the same year. The experiences I felt were very important to me as a person, and as an actor, and it felt like it was back to back and it was very hard, and there was no time off, and I just kind of had to jump right in. I think that I was able to (pauses) push myself a little bit further than I ever had before and that’s a good feeling.

BT: Both have a lot to say about the state of the world and what is going on right now.

DF: Totally. I think I realized that with American Pastoral as I talk about it more and more. Because when you make a film, you’re so insular about it, you know, and thinking about the script and about the world that’s been constructed for the process of your movie and then once you see it and hear other people’s reactions to it, you can gain some perspective on it. With American Pastoral, they are talking about the similarities to today, and how that’s unfortunate, when you’re talking about a film you realize it. So that’s been an interesting process, having outside people see the movie.

BT: Speaking of American Pastoral, and having actors direct, you’re also going to be in the Kirsten Dunst film, The Bell Jar…

DF: Mmm-hmmm, mmm-hmmm. This is something that Ewan [McGregor] talked about. You almost have, I don’t know if it’s more, but you have the experience of seeing the work of all kinds of directors and how they work, because you’re moving from one movie to the next. Whereas one director, they only know how they work and their process. Obviously, I haven’t done this myself and I hope to do it one day. I had an extraordinary experience with Ewan. Kirsten is one of my good friends, like in life, and I know it’s going to be an amazing experience because I love her (laughs). I am really looking forward to it because I know that it’s going to be my path one day.

BT: Did you know that you wanted to do this film immediately?

DF: Brimstone was so unlike anything I’d ever read before, and I immediately wanted to be a part of it. Yeah, right away!

BT: How did you feel about using sign language?

DF: In life, we communicate so much through energy and body language, that when you really know a person, they could walk in the door and you could know something’s wrong before they even say a word and that’s such a real thing. I’m fascinated by that in life and also just by being able to get that to come across on film and for the audience just to be able to feel energy from sort of a (chuckling) you know, screen. When I started doing [sign language] more, I felt that it was sort of a freeing experience. When you’re saying lines by somebody else, and maybe they don’t feel exactly comfortable in your mouth, or you’re trying to say it in a way that feels natural, in a way that conveys information. You’re trying to balance this unnatural experience with just (chuckling) talking, it could feel very freeing not having to think about that.

BT: How do you feel about the violence in the film?

DF: There’s two actors from Game of Thrones in the movie [Carice van Houten and Kit Harington] and it’s one of my favourite shows and I love it, but it’s extraordinarily violent. There’s been moments on that show when I’ve been like “Whoa!”, but it’s a way of life and that’s truthful. In the world that Martin has set this film in, it’s just a way of life. It’s truthful.

BT: I’ve got to ask a Thrones question, now that you put it out there. When you watch, do you identify or have a particular alliance?

DF: Oh? Do I have an alliance? God, that changes all the time, though I’m a huge Jon Snow fan and I was thrilled to be working with Kit in the movie even though we didn’t have any scenes together and I didn’t get to meet him, which was very disappointing. But I can’t help but love him and I love Khaleesi [Daenerys Targaryen], because I love the whole vibe, the way she looks and the fire. I find it so sexy and wonderful, so…

BT: Do you watch with a big group?

DF: I used to watch with a big group and I think that for Season 6 I was working, so I watched it by myself but it’s something that I’m watching every Sunday night. I don’t care if I get home at 2 in the morning, it’s something that’s going to be on, because I don’t want it to be spoiled and I want to watch it.

BT: You’ve been an actress your whole life and really grown up on screen…

DF: On my very first film I worked with Sean Penn, and on that first day I learned that you can get locked into your lines and you forget to be spontaneous, which is what really matters in film. In one scene, he improvised the whole time, which challenged me and taught me even at that young age to try to keep up. So as an actor you have to present and you have to be open. Just because your line is “green”, if they ask you the colour of the sky, you don’t say “blue”, you should just go with it, and that’s something that I take with me even today. And I worked with Tom Cruise and he’s the most generous person in the world, you know, the way he treats the crew, and how wonderful that is, and I still take that with me.

Brimstone is now playing in select cities and is available on VOD from Momentum Pictures.