What we liked best about chatting with Burden of Truth stars Kristin Kreuk, Peter Mooney and Star Slade is how kind, engaging and very down to Earth they were on the CBC Winter Press Day. As an example, earlier in the day, Kreuk was doing a one-on-one interview in the “holding area” with a print journalist and sat cross-legged in bare feet across from us, and then after the interview was over, headed over to the refreshment area and made a little squeal when her favourite dish was sitting there.

It was a pleasure sitting down with the trio and discussing the fascinating new show, which premieres Wednesday at 8 p.m. on CBC (we’ll be watching too). Here is a condensed and edited version of our lovely conversation with Kreuk, Mooney and Slade.

Brief Take: How did you start to develop Burden of Truth?

Kristin Kreuk: We started mostly with this character [Joanna Hanley] who goes back to her hometown and there’s this class-action lawsuit that is based on these symptoms that are manifesting in these teenage girls. The creator [Bradley Simpson]’s original idea was from talking to his daughter about the Salem Witch Trials and these young women that basically got persecuted for something that they didn’t do. She was asking, “How does that happen today? How does that still happen?!”, and this story came out of that – these young women who are having these symptoms and could get blamed for that, being women. I mean, this story has diverged from that, but we do explore that also.

BT: What’s interesting is that you start the show in Toronto and then all of a sudden, you are in Manitoba, just one province over, but like a world apart.

KK: That’s what Star said just a little while ago.

BT: Kristin, your character Joanna Hanley can feel like…

KK: The fish out of water, yeah. I think for her it’s a weird experience because its the small town in which she grew up, it’s a place from which she has all these memories, but probably has warped and morphed in her memories like all the years she’s been gone, and she comes back and is confronted with the reality of her past. That informs the case and how the case is solved. 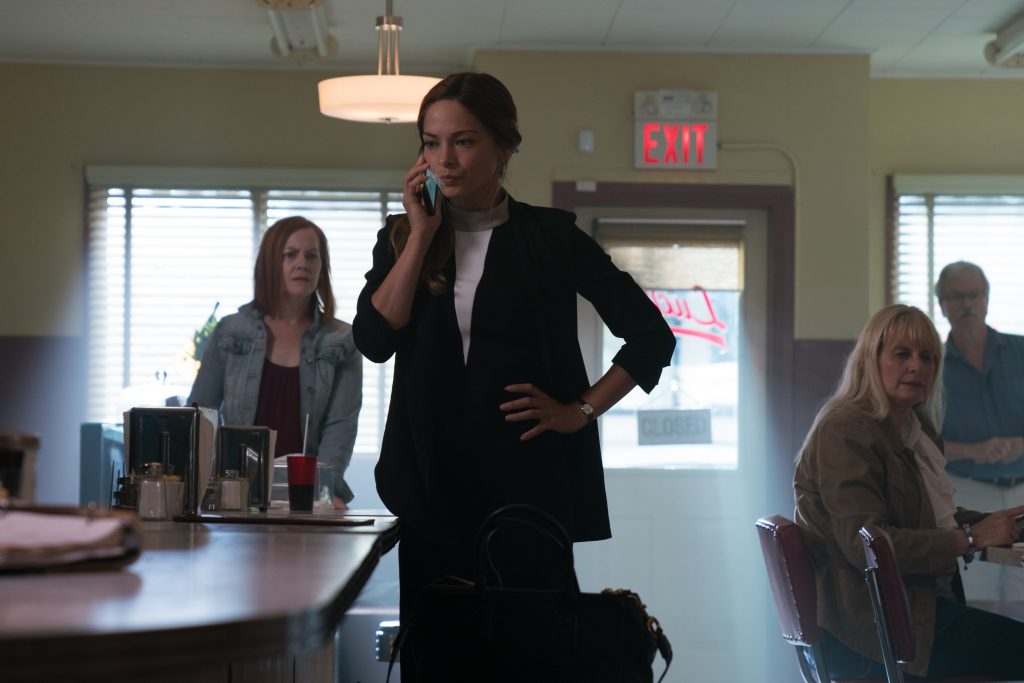 BT: The reality is that while Canada is a very lovely, diverse country…

Peter Mooney: Especially not in Selkirk.

KK: Which is where we shot.

BT: It also informs the nature of the show.

KK: Yeah, because we’re also exploring the nature of a small town, in some ways, how these communities survive and thrive, and when things happen that break down the economy or threaten the livelihood of the individuals that live there, how does a small town maintain itself, and how does it maintain its identity. And then personal stories, like do you want to get out, as a teenager. Do they want to stay, like [Peter’s character] Billy Crawford, or leave, like Joanna has chosen to do?

BT: The audience can bring its own perspective, and choose to whom to relate.

KK: Everyone can relate to different people.

PM: I really appreciated that in this story, the take we took wasn’t “like this person, don’t like this person”. We’re exposing all of these characters, all of their flaws and all of their strengths, leaving the audience to navigate this town and have their own allegiances, and have the people for whom they root, and it’s nice when it’s not prescriptive. Because of this take, the conversation on set didn’t stop.

KK: I think that our bad guys aren’t really bad guys. We see them make the choices they make and you feel for them, and you’re like, “I get it, man”, but there are still things that are not okay to do. So I think that’s what life is mostly, there are probably some villains out there, but most people are doing the best they can with what they have and sometimes they’re destructive.

SS: Because they are not equipped to understand.

Brief Take: The audience can talk about the show amongst themselves.

KK: I hope so. You are right based on whatever perspective you have, or experience you have of living and hopefully people will be able to look at it and go, “okay, what are they doing that I don’t like but what would I do about it”, and our show shifts throughout the season.

BT: Did you take previous professional experiences with you to your roles on Burden of Truth?

KK: It’s funny, I take this show with me constantly. My boyfriend’s a writer on the show so you go out, you talk about it and it’s always there. I think because the characters are so complex, all of them, that there’s so much with which to play and develop in your head. I think it’s interesting what you said; I think that every role is informed by the one before and not just the role itself, but the process that you go through and understanding how want to engage on set, how you want to be, what kind of environment you want to create.

BT: Well, you do put “burden” right there in the title.

KK: *singing* “It’s a Burden”. *giggles* But I think that ultimately it’s a show about family.

Burden of Truth airs Wednesdays on CBC, with the first episode set to debut on Wednesday, January 10th