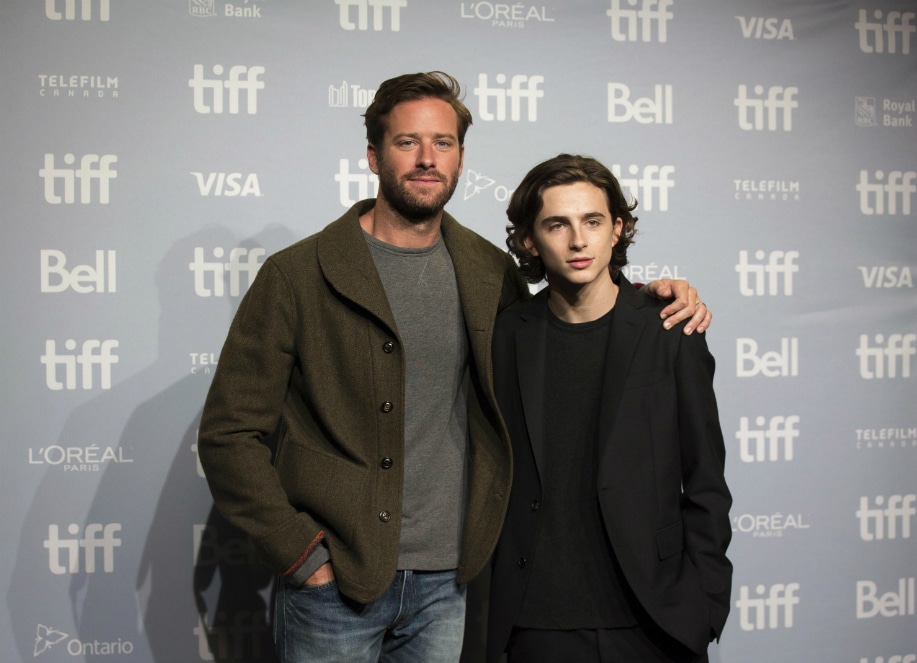 Call Me By Your Name is a love story for the ages. Some are calling it a queer masterpiece but we believe that its sumptuous tale of first love is universal. Anchored by award-worthy performances by Armie Hammer and Timothée Chalamet, the film is one of the best of the year and an absolute must-see.

During TIFF we had the wonderful opportunity to sit down with the film’s stars for a roundtable discussion with a few fellow journalists. The following is a condensed and edited version of that delightful chat.

Congratulations on the sensitive and gorgeous film! How well did you two know each other prior to production?

Armie Hammer: We actually did not meet until both of us had been hired and travelled all the way to Italy. We walked into this beautiful palazzo in Italy that was Luca’s. It had beautiful wrought-iron fence and a beautiful courtyard with blooming flowers and sunshine. Then I heard this piano music wafting in and Luca said, “Come, let us speak”, and I said, “Ok!”. So we go up and there he is. He’s sitting there at the piano with this Italian composer and they’re playing, and it was like something out of a movie.

And what a stunning place to film it in!

Timothée Chalamet: It was a dream!

AH: There are worse. *laughs*

TC: It was a transformative experience.

What first drew you into the project?

TC: Well first, Luca. I saw I Am Love before I even got the chance to meet with him, and then after I met with him and James Ivory, A Bigger Splash came out, so I became even more of a fan of his. For a young actor that works only in American films, it seemed like a tremendous opportunity to be in the lineage of great European filmmaking. His films are as beautiful to look at as they are emotionally. Secondly, it was the chance to work with Armie. It was also the chance to work with André Aciman’s source material, which is a book that holds a special place in so many people’s hearts, and mine now as well. It was the trust in Luca that he was going to bring in his special cinematic flourishes. I was so thrilled that he was able to rope in Sufjan Stevens, because I was such a huge fan of his prior to the filming, and then all of a sudden he was writing three songs for the movie. Lastly, getting to film in Italy for three months would be difficult to turn down.

TC: I got so lucky with Armie.

TC: *laughs* There was the pre-production process and the actual work and obviously some of the scenes are emotionally and physically intimate. Because of my age and experience, Armie knew what to do way more than I did. For actors and just people my age, The Social Network is a formative movie. When you’re 12, 13, it’s just a fascinating movie.

TC: *laughs* Sorry!! But now, post film experience, I haven’t been able to strike up a friendship with anyone I’ve worked with like this. I just felt so welcomed in by Armie and his wife Elizabeth, and they’ve introduced me to some great people. It was an incredible working experience and then a beautiful friendship sprouted out of that. I feel like we’re family now.

Timothée, how did you acquaint yourself with the ’80s time period that the film is set in?

TC: Well certainly for the dancing I had to. That was more Armie than me, but that dancing is very specific to that time period. Somebody said earlier that that was their favourite part of the film – the dancing.

AH: I don’t think in my entire life that I’ve ever been as uncomfortable as I was when we were filming the dancing scenes. *laughs* It was so miserable. But, you know, that was also part of what we were there to do – to be challenged, to be pushed. I don’t particularly care for dancing and, even more so, I don’t care for dancing to no music, because you can’t have music going if you’re recording with sound. And then dancing with 200 people just watching, not dancing, just watching. They’d start playing the music and then you’d get out there and they’d stop playing the music and say, “Go!”.

TC: Luckily it turned out quite well.

AH: Thank you. I’m glad you liked it.

It feels particularly fitting that the film is being released now.

AH: Here’s what I think about that. This film takes place in 1983 but it could have easily taken place in 1883 and it could easily have taken place in 83 AD. This is a movie about two human beings organically and naturally falling in love with each other in a sweet and tender and beautiful way. We’ve seen now that we have an audience reaction that, regardless of your identification or orientation, this is a movie that anyone can watch and be reminded of those same feelings they experienced as well, regardless of who they were with. And that is one of the beautiful things about this movie – it shows you that love is love and human is human, even if it looks a little different than you. Your perspective can be challenged and your perspective can be changed.