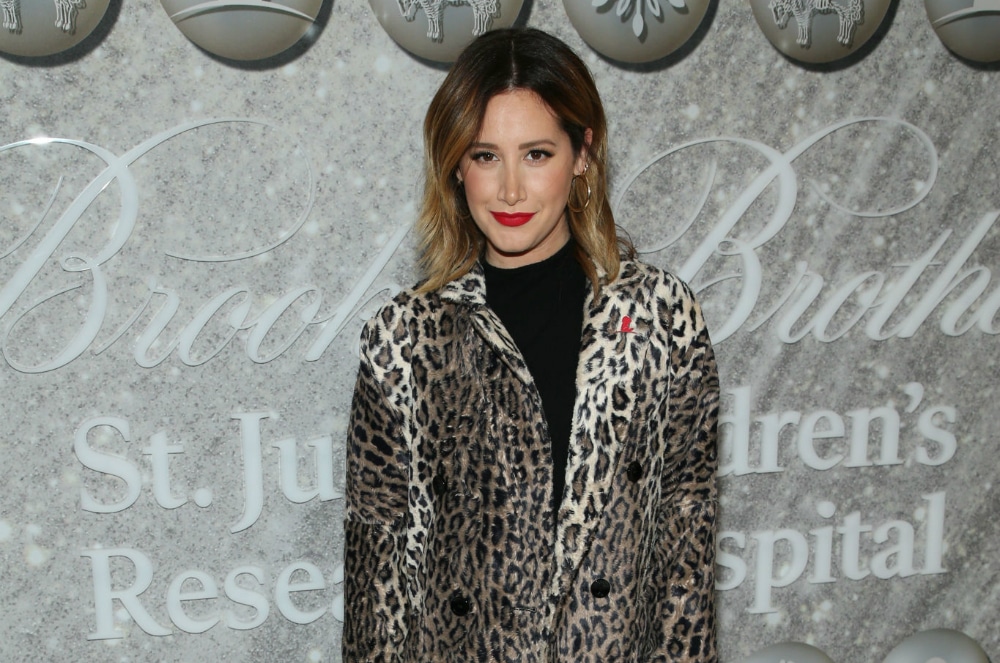 If you’ve been following the recent activity of Ashley Tisdale, it’s clear the multi-hyphenate (actress, singer, creative director, producer), has been undergoing a subtle shift recently, working on productions such as the funny Carol’s Second Act (taking over as Jenny, the daughter of Patricia Heaton, who plays the titular Carol). This is after starring in Netflix’s Merry Happy Whatever, which was a really amazing project as well. Tisdale is also a social star on Tik Tok, leaning into past roles, but clearly taking centre stage with a well-crafted Jenny on the CBS series.

We spoke to Tisdale on the phone from Los Angeles and gained some valuable perspective into the multi-talented performer.

The following is a condensed and edited version of our chat with the vivacious Ashley Tisdale of Carol’s Second Act.

Brief Take: Your most recent album, Symptoms, was really catchy. Did you go from that quite naturally into Carol’s Second Act?

Ashley Tisdale: Mmmmm…no I wouldn’t say so, I think that Symptoms was obviously last year, over the last few years, I had worked on it and last year I came out with the album, and that was about my personal thoughts and mental health, but Carol’s Second Act was a pilot that I had read and I had loved. It was the best script that pilot season and when they asked me to come out and take over the role of Jenny, I was very excited to do so. Getting to play Patricia Heaton’s daughter on a show is so much fun, she’s obviously such a iconic comedy actress, so it’s really inspiring and I really love working with her.

BT: Your chemistry with Patricia Heaton is very apparent on screen. You share a common interest in home renovation, is that correct?

AT: Yeah! That is one of the things over which we really bonded was renovating and interior design. I mean she’s definitely someone who is into fashion, obviously, so sometimes we’ll come on to the set, we’ll be wearing the same shoes in a different colour and yeah, we definitely have some fun stuff in common, for sure. 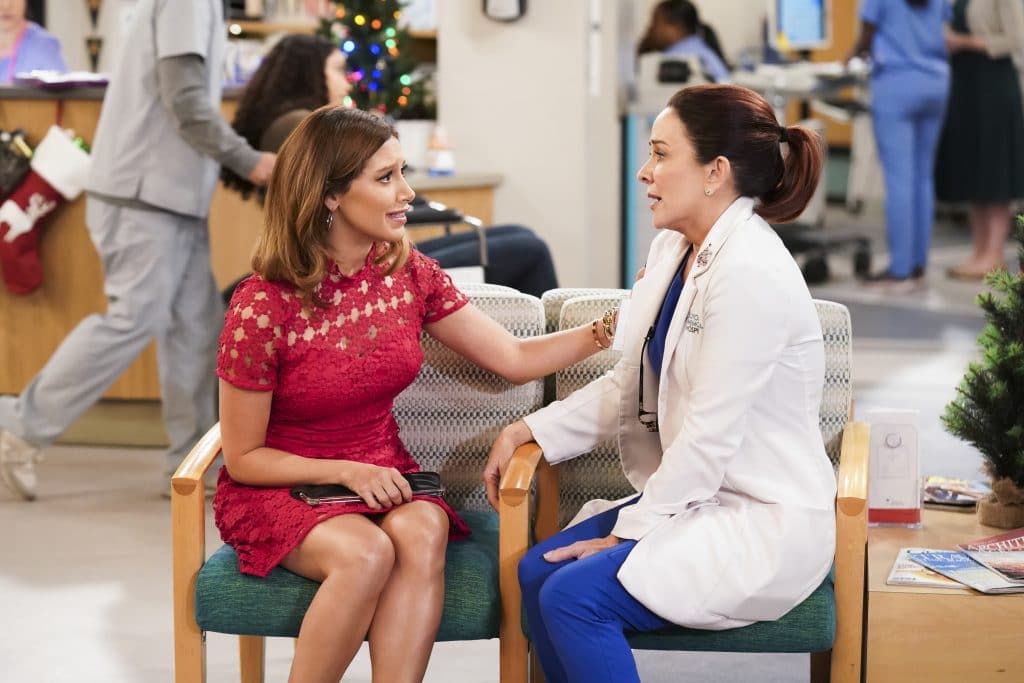 BT: I watched a video in which you allowed Architectural Digest into your well-appointed home a year and a half back. You talked about how quickly you like to change things around, is that accurate?

BT: You and Patricia Heaton seem to move with each other in step, how did you form that alignment?

AT: I don’t know, I think it naturally happened. We didn’t even realize how much we looked alike until I got the role, and it’s like: “My gosh! I could totally play your daughter for sure!”. And then as we’ve been around each other, yeah, we’ll have the same mannerisms, and in a picture, we’ll smile the same way, which is so freaking weird. It kind of naturally happened, because I really enjoy when there’s a show or a movie in which it is cast that the person could really be, like you could see the mother-daughter. And I think that is something that is really cool about this show is that it’s not just like they picked two actresses that don’t look alike to play the roles, that I actually can look like her daughter. It’s fun. 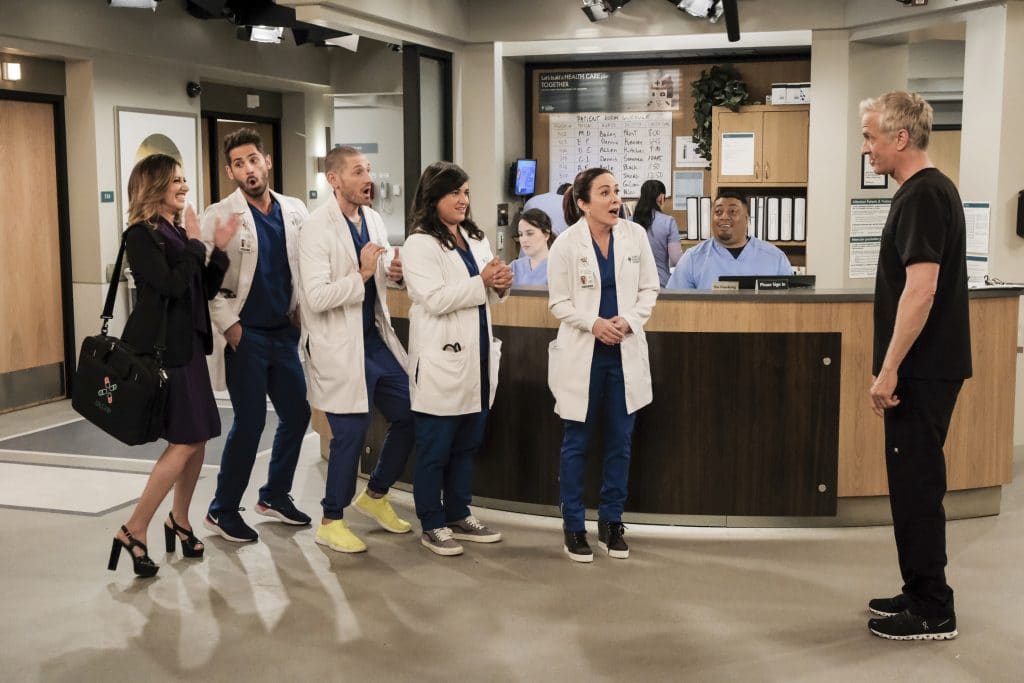 BT: You play a pharmaceutical rep. You said that you learned from a friend who is one in real life?

AT: Yeah, I mean I think that it’s someone who is in the field. I got to ask her some questions and learn what she does. So when I had heard what the character was, I called her and it’s really cool. Obviously playing Jenny is very different from me, from what I have done in the past, and so it’s obviously always fun playing something that you haven’t done before, and being in the hospital and playing a pharmaceutical rep and I have those bags that I am carrying with me at all times, [laughs] it’s pretty fun.

BT: You also seem to be always carrying around a coffee cup. Is there actual coffee in there?

AT: No, on set there is definitely [laughs] not coffee. I actually only have two coffees, maybe, at the most a day. I do love coffee and I have one every morning, but I am not like a [laughs] crazy coffeeholic in which I am having multiple a day. Usually within the cups on set, it’s water.

BT: I think that there are a couple of Canadian actors on your series…

AT: Actually, there are three (Sabrina Jalees, Jean-Luc Bilodeau and Ito Aghayere). 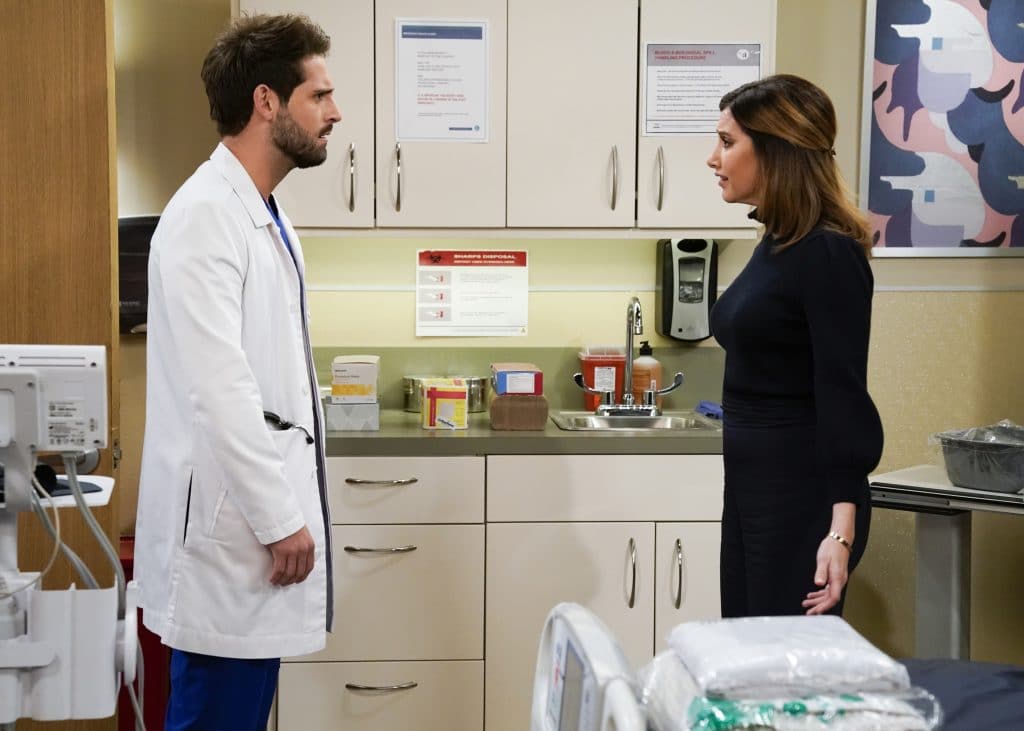 BT: Right, three! Is there a strong Canadian presence on set as well?

AT: Actually, you know, not really. I mean I’ve always thought that Canadians are so nice, and so yes, that presence is on set for sure, but I guess I expected…actually, the one that does have little words that is like: “Oh that’s not how you say it, [laughs] That’s the Canadian way to say it” is Sabrina. [laughs] There are times when I’m like: “Oh! There’s that little slide!” and it comes back in on a line and so it’s pretty funny. But they’re all really great, and obviously I lived in Vancouver shooting a series for a while, so I have a love for Canadians and it’s so much fun working with them.

BT: What has it been like to get to bond with Sabrina Jalees?

AT: Oh man, Sabrina and I immediately became best friends. We have so much fun on set together and yeah, she’s just one of my best friends. It was funny, when I watched the pilot, because I obviously was cast after the pilot was picked up, but I had watched it and I saw her and I was like: “Oh man! She seems really cool and funny”, and she’s like that in real life. She’s just so funny, she makes me laugh all time, she’s so talented, obviously, but we have so much fun.

BT: How natural is it to bring co-stars of yours into your Tik Toks?

AT: It’s pretty natural! Obviously doing a sitcom is so much fun because we mainly rehearse during the week because we have our live audience for when we film the show, so we do have a lot of time in between stuff. It’s fun because we recently all got into Tik Tok, and especially Sabrina and I have a Tik Tok together called Friendcrush, we’ll just be off to the side, like rehearsing our Tik Tok in the cafeteria room, so we just have so much fun together. I mean that’s what’s really cool, we really are a huge family and we love spending time together, so usually when we’re not working, we’re going out to dinner, or I will have people over to my house, and yeah, it’s a pretty good crew. 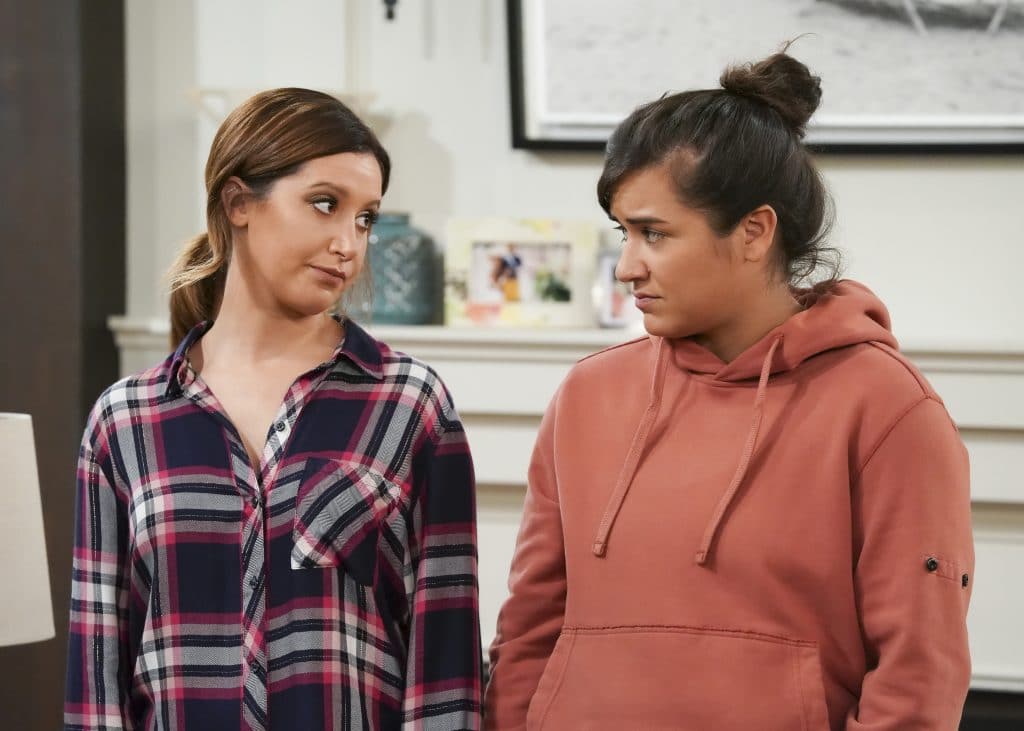 BT: You said that you went directly from Merry Happy Whatever into Carol’s Second Act?

AT: Yeah, I think it was maybe a week that I had off and then went into it.

BT: What was that transition for you to go from that role into this one?

AT: It was really fun. Obviously the best part was that we film on the same lot. And so I went from my dressing room to like…the stage was very close [laughs], the new stage, so I got to move my dressing room stuff into the new dressing room really easily. The best part is that I get to work with the same crew and so it’s been really awesome, it’s almost been an extension. Obviously the characters are very different and Kayla’s a lot more dramatic and I would say Jenny is a lot closer to me as a person, just because she’s very business-oriented. I love how Sarah and Emily have written the character, it’s basically that I could be just Patty’s daughter and obviously I carry on this “will they or won’t they” with Daniel and just be like the girlfriend, but they really have Jenny, you know, she’s a very strong and work-oriented person. I really love playing that because I am very driven in life as well, so it’s really fun.

BT: Your character has a past history with Daniel. How have you enjoyed playing that aspect?

AT: I have so much fun with it. I mean, J-L (Jean-Luc Bilodeau) is so funny when it comes to the more romantic stuff, we just laugh. I would say we have a very brother-sister relationship. When we play the intimate stuff, it gets so uncomfortable [chuckles] and we just laugh about it because it’s so funny, but we have a good time with it. I think that Daniel is so different from a lot of people that Jenny would be into. I think that Daniel’s a lot more into Jenny than the girls that he’s been with in the past, so it’s a very interesting dynamic between them. I think that Jenny is very strong, while Daniel, he is really…he’s probably had girls say “yes” to him all the time and I think that Jenny gives him a challenge, which is different for him. 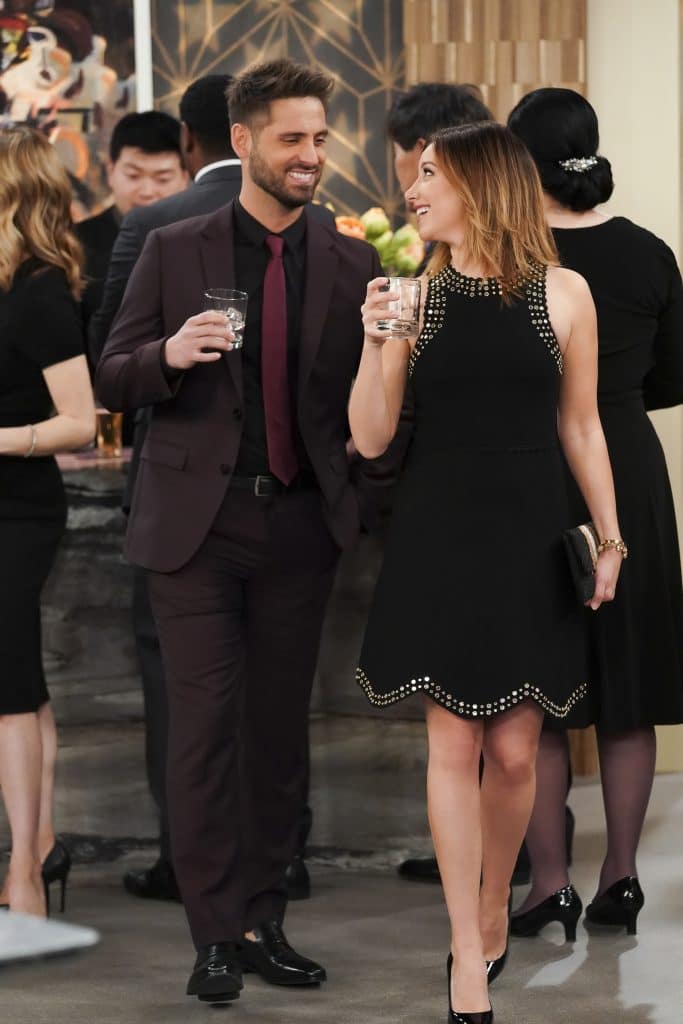 BT: Have you enjoyed the audience reaction to the series?

AT: Yeah! I love live tweeting with the audience and seeing what they’re into and obviously communicating with them. It’s always fun, I think, when you’re on tv and you can be with everybody because you’re watching it with them. The experience is pretty cool.

BT: You just announced that you’ll be shutting down your cosmetics line. What inspired this and what is next for you?

AT: I think that I took over the company about a year and a half ago, and I had the company for about 4 years at this point. And I think that when I had taken over the company, I wasn’t doing a lot in acting and I got to focus on it a lot more and then with the shows that came up, how I always live my life is my priority and acting has always been number one. And so I was excited to be doing both Merry Happy Whatever but also Carol’s (Second Act), but as I was doing those shows, I was realizing how hard it was to juggle both being the owner of a company and [chuckles] trying really hard to figure that out and also being on set every day, and so I did have to make a choice. It was something that I think that for me, yeah, as hard as…it’s not easy owning a company, and obviously there was a lot of exciting stuff that happened, but also a lot of hard stuff in which I learned, in this last year, what I would learn in business school. I am proud of myself for trying something but I think that for me right now, with everything that I have going on and the shows and then I’m doing a movie next month, it’s just time to let it go.