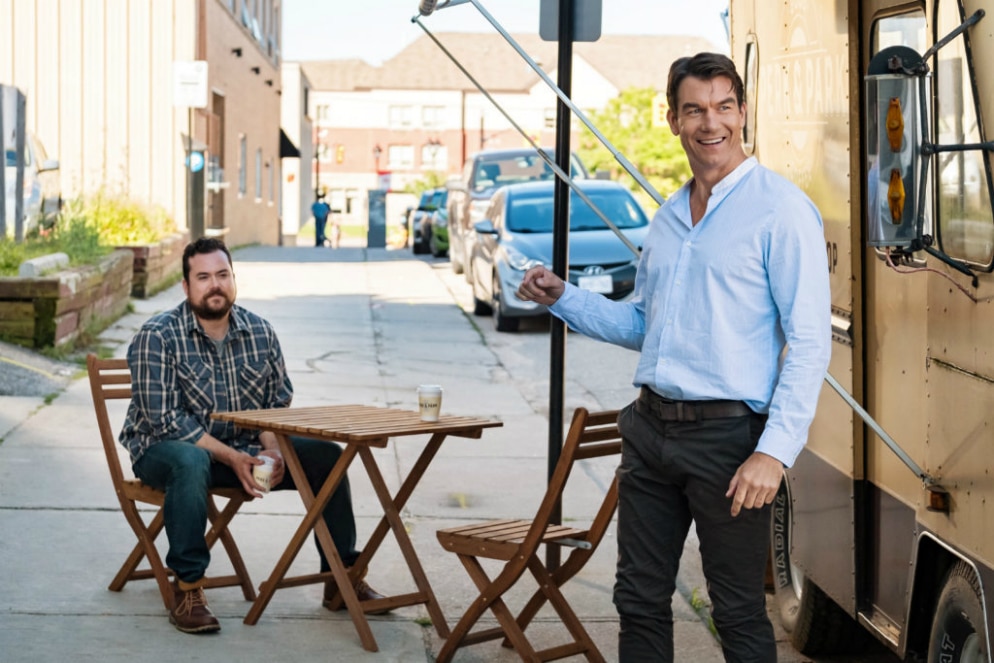 Speaking with Jerry O’Connell is a singular experience. I am thrilled that we connected but it was a little bit of a surprise as he decided to leave his brother Charlie’s wedding rehearsal dinner to call me up. In this way, he was concerned that he would appear as a telemarketer, but when Jerry O’Connell is phoning you up, it certainly doesn’t feel this way. I was amazed by his recall of the events we spoke about at the Canadian Academy Family Fan Day, and I certainly am looking forward to the country seeing Carter, the series we discussed, which he shot in North Bay and features a really funny tone and style (and a great lead, of course).

Here is a condensed and edited version of our interview, in which we discussed pretty much everything.

Brief Take: Had you met any of your Carter cast before?

Jerry O’Connell: I never met Kristian Bruun, I only knew him as the funny husband on Orphan Black and the creepy doctor on The Handmaid’s Tale and when I met him, he’s not creepy at all, he’s actually one of my closer friends and he’s a real find for us. Sydney Tamiia Poitier I did know, because we went to university together [New York University], and I did and still do have very strong feelings for her, she’s lovely. I know that the show is called Carter, so I would like walk around thinking it’s my show, but in reality, Sydney is quite possibly the one who keeps it all together. When you do these crime procedurals, these light crime procedurals, and there is a murder a week, that is a bit of a stretch of the imagination, so these things need to be kept back in reality, and that is Sydney’s difficult task of every episode and she really steps up. 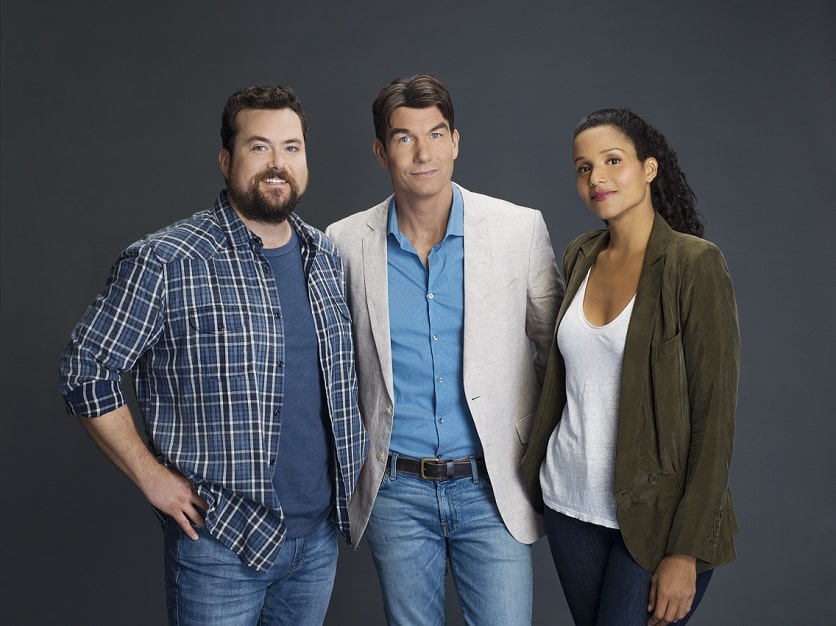 BT: We watched you on TV this week as Sheldon’s big brother on the wedding episode of The Big Bang Theory.

JO: It’s funny, I know I’m here to talk about Carter, but that cast of Big Bang is…oh wow…they are the best of the best. I’ve got to say, all of them are great but working really closely with Jim Parsons, I actually did see him last night in The Boys in the Band, the Broadway show. I’m not kidding you, I think it was the best play I’ve ever seen. It’s about a group of guys that have a party in the late seventies and they are homosexual and it’s about them just getting drunk and a little surly with each other, and then becoming very open with each other.

I could not believe that the guy who played my brother, my baby brother, Sheldon Cooper was up on that stage. I was so proud of him! My God, it was great. I feel like I’m his big brother. I literally went backstage and I think I said “Baby bro, I’m so proud of you”. He was so good! If you get a chance this summer, go and see that play. Woo! That was a good time, and also I don’t know if you watched all of the last episode, that Mark Hamill stuff, “does anyone have a Star Wars question?”. Oh God.

BT: Congrats on your real life brother getting married too! I enjoyed his season of The Bachelor.

JO: I’m super happy for him. They’re really in love. I mean, this isn’t the young lady he met while doing The Bachelor. So that did not work sadly for that show, it didn’t mean true love at that time, that’s a bummer. Spoiler alert!

BT: You went to plays when you promoted Carter in the U.K. too. You went to Chicago, right?

JO: I went to see Cuba [Gooding Jr., O’Connell’s co-star in Jerry Maguire]. I also saw a play with my co-star from my show which did not go, didn’t happen, called Mockingbird Lane, the Munster show, my co-star in that is named Charity Wakefield, she’s a very high-faultin’ English actress.

BT: That was a Bryan Fuller created show. We’re big fans of his!

JO: Listen, it started with that Hannibal. I was a big time Fannibal.

BT: What is something that surprised you about Carter?

JO: It’s interesting in that it makes fun of hour-long procedural shows. I play a cop who was been working for the last decade on a light procedural show that you would most likely be seeing Tuesday at 8 p.m. on Bravo, and I have a breakdown and I move back to my small town, which is called Bishop, which is based on North Bay. I move back to North Bay and using those television skills from the last decade, I think that I can solve crimes. So it’s a lot like Castle, to me it really made me laugh because it made fun of this very comfortable hour-long procedural that we’re very used to watching. We have an hour, we want to see a murder, the first bit is what we call a teaser then we like to see the stars go under the yellow Do Not Cross tape, then we meet a bunch of suspects, and the ones that we think didn’t do it, ended up doing it and we feel very satisfied. This show changes all that, but at its heart it’s actually just one of those shows. The word that gets thrown around a lot is “meta”, that’s the word that everybody uses, and I thought it was a fun week and I felt we were all in on it. I feel like we can’t make a standard, light procedural any more these days, I think everybody’s too smart. When you’re competing with the Letterkennys out there, things have to have a little extra something and I think Carter has that. 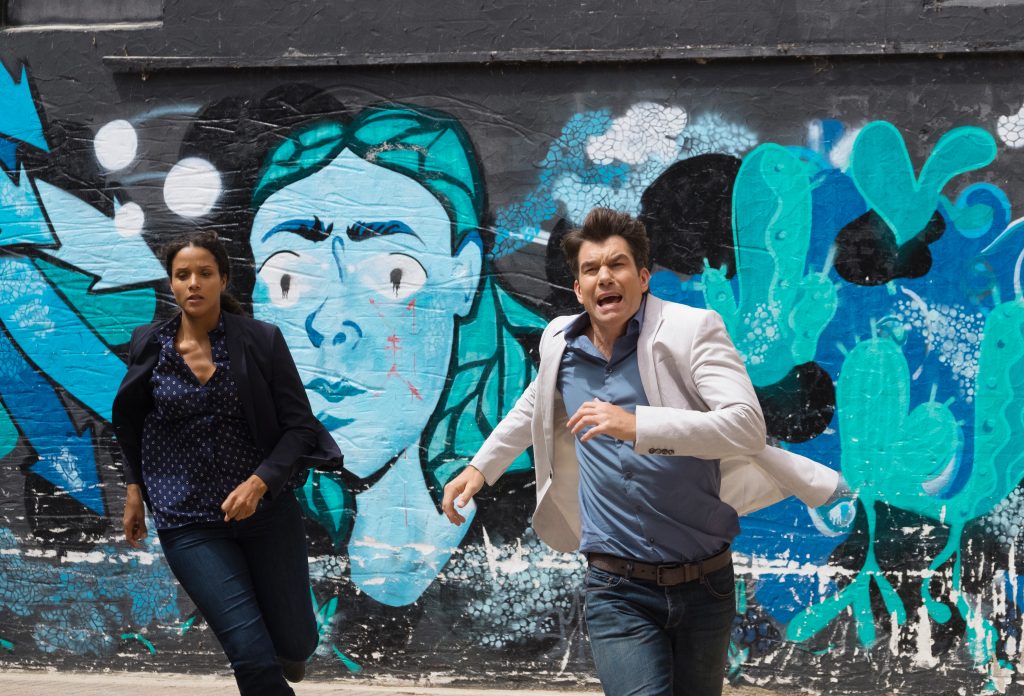 BT: You’ve worked with almost everyone in the industry at this point but who is someone with whom you’d like to work?

JO: I had dinner with Billy Campbell up in North Bay, a couple of nights, and I’ve got to say, that guy is pretty much the most interesting man in the world. You know, he goes on boats for months at a time, like a large yacht, but the old school like no TV on board, which are not like the kind of boats that I go on, the kind of all-inclusive, two shows a night cruise. He goes on like old school whaling schooners and sails the Nordic or Adriatic Sea, and using like whale sperm oil for stuff. I hope that also keeping it North Bay, Carter could use the Letterkenny guys on our show. It might be fun if the hockey players find a body or something.

JO: Oh, I did do something fun, I reviewed every single restaurant in North Bay on Yelp. Look me up on Yelp under Jerry O’Connell, it’s just me in North Bay reviewing everything.