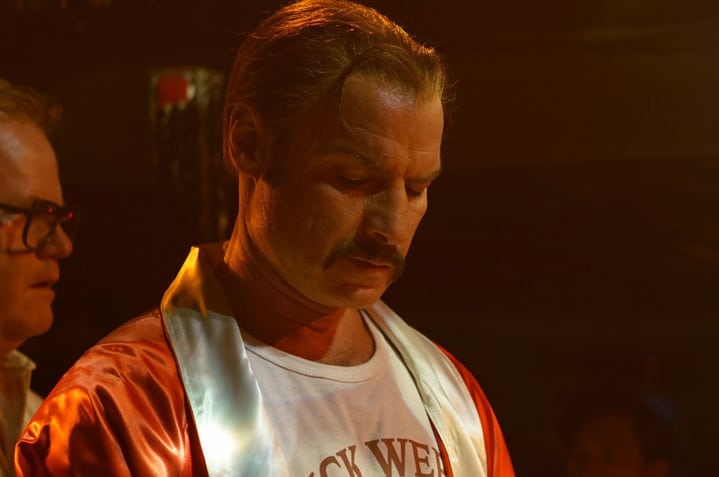 The experience of watching the film Chuck (formerly The Bleeder) at TIFF was amplified by the fact that real-life subject Chuck Wepner really took a hold of the stage, regaling the audience at the Princess of Wales Theatre and showing off his skills as both a pugilist and as an entertainer. It was no wonder that he inspired the film Rocky,  especially since these events are portrayed in the film. Therefore, it was an out of body experience the next day when we sat down with star and co-writer Liev Schreiber, as the actor is the picture of refinement and therefore a surprising choice to play Chuck, and yet his answers elucidated why he is the correct choice. As for Falardeau, he’s just a blast and quite self-effacing, providing some incredible off-the-record material as well. Here is an edited conversation between the director, star and us:

Brief Take: We enjoyed your performance in Glengarry Glen Ross as Ricky Roma. Was there anything abut that character and Chuck that tied them together?

LS: For me, it’s rings. Not boxing rings, but rings you wear on your hands. Chuck loves them, Ricky Roma loved rings. So the minute I put on Chuck’s rings, it reminded me of Ricky, because Ricky had that thing with his fingers, if…you know you find this character and you don’t know if they’re going inspire you and it’s always strange things, I figured it would be something in the make up or something would catch me, it’s always, you never know. Ricky, he had a pinky ring, and the pinky ring started this thing (interestingly, Schreiber is wearing rings as he says this). Ricky Roma’s this Midwest, you know, basically a salesman, real estate guy, and he’s the top seller at his company.

So he’s got this high school ring that he wears on his pinky, but this really nice one. He’s got another ring on this finger. It was basically something that I liked the ring so much, that with the character, I was leading my hand with the ring, so if I sat down with always out like this, you could see my ring, so it became a way that the character body positioned himself, and Chuck had that too, he loved jewelry, which was so strange to me, because he was such a big, masculine guy, but he loved wearing all this gold and shit and I’m not accustomed to that at all, but that was one of the things that stuck, when I started putting it on, it was a little self-conscious of me, you know, which I like, you know, like he likes wearing them, but it doesn’t quite suit him!

Brief Take: You were also playing a real person in Spotlight– did you see any parallels there? Do you embody the person, or just give your take on him?

LS: I was so flattered that Marty’s friends said that I got Marty, because I’m not really into getting Marty. I’m not really into getting Chuck. They’re narrative tools, there’s something about the story that we like and we use the character to articulate that aspect, I think it’s a more theatrical approach to film. For instance, I got a great Chuck voice, I mean, he didn’t want me to do it, because it made it too comic, but as we you heard (and here he does an impression), Chuck’s real voice sounds like this, he has a high voice, a 6″5′ guy and he talks like this. But there was something more to it, that we didn’t want to make fun of the character. We were putting so much emphasis into how gentle he was, and how fallible and vulnerable he was, that we didn’t want you to lose track of exactly what he was which is how dangerous he was and his incredible penchant for violence. Not towards his family, but in the ring and on the streets.

Brief Take: What attracted you to making a boxing film?

Phillipe Falardeau: Boxing a century ago was a gentleman’s sport, but then it moved on to something that is rich and interesting for lower class people. That’s more in the realm of what is happening in our film. But I was always fascinated by people who would accept the fact of being hit all the time. Going back to Chuck, the more he gets hit and the more he bleeds, the more people love him. So what kind of psyche do you build for yourself when people love you because you bleed? They love you and they affectionately call you “The Bleeder”, which is an affectionate kind of nickname.

Brief Take: What is your biggest style influence?

PF: I look at my good friend Denis Villeneuve and where he is at right now, and he has a style that is very definable, and is continuously getting better and better and is very powerful. I have no style. So this is my path in cinema, he has a path like that, and I love his films and he loves mine, but we have two completely different paths. I think we need a certain amount of self-doubt to keep us going and not to be on automatic pilot.