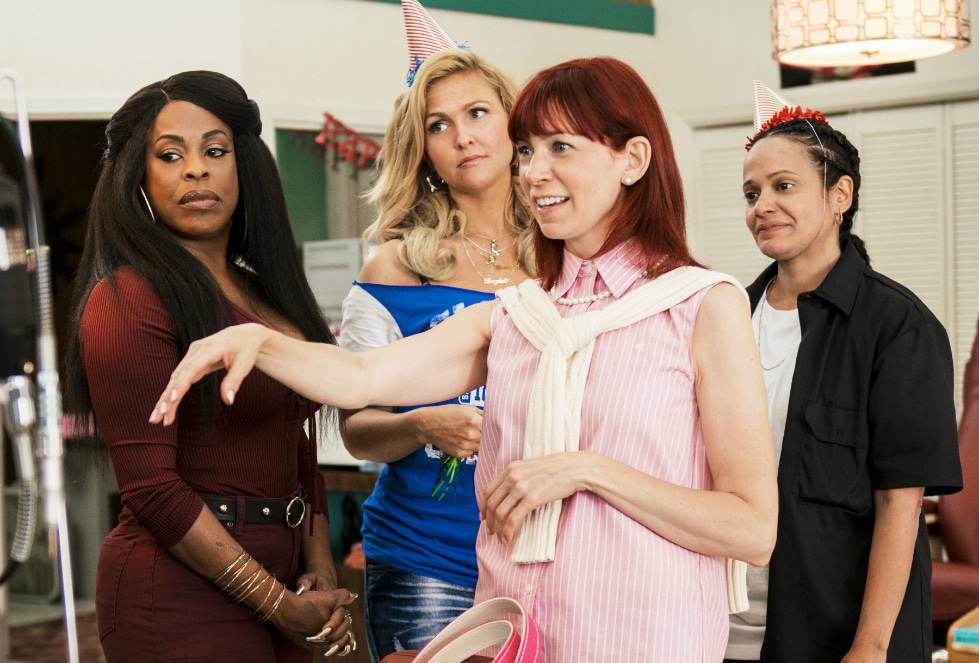 Getting the chance to speak with Carrie Preston is like a warm hug. The writer-director-producer-actress is wonderful in the TNT show Claws, and her character Polly reveals new sides of herself on almost every single episode. Of course, we also loved her performance as Arlene on True Blood, as well as her work in The Good Wife and The Good Fight. Essentially, we’re big (!!) fans of hers and it was a wonderful opportunity to speak with her in advance of Claws Season 2.

Here is a condensed and edited version of our chat with the delightful Carrie Preston.

Brief Take: What first drew you to Claws?

Carrie Preston: When I first read the script, I thought, “this is really something special and something that really stands out of all of the pilot scripts”. There are incredible pilot scripts right now but this one just had something unique. It was special and funny and weird and raunchy and surprising and dark, and all of those things mashed well together. When you feel that way reading a script, then you know you’re already starting off strong. I thought, “if we get it right, people will really flock to it”. And they are! They are really flocking to it and we’re so very grateful for that. All of the actors and the crew give it their all and I’m very proud to be a part of it.

BT: The ensemble, particularly the core five women on the show, work so well together, on and off screen. Can you talk a little about collaborating with them?

CP: You know, when you see friendships with women in tv shows or movies, they’re usually pitted against each other. You can’t have a tv show or movie without drama, that’s just a fact. In this case, though, the conflict is not amongst each other, the conflicts are coming at them from the outside. Even if they have tension with each other, they’re still a crew. They’re not trying to take each other down, they’re trying to build each other up. Then that spills out into our own personal relationships. It’s nice to be a part of a team where that dynamic and sense of camaraderie is in place.

BT: Tell me about crafting your character of Polly, who’s very much a mystery to those around her.

CP: With Polly, she’s an identity thief, so you never really know what you’re getting with her and nor do the other characters. She keeps everybody, including herself, guessing. Polly is curating her own life as she’s living it. There are psychological reasons for doing that, that maybe the audience hasn’t seen yet, but there’s some pain there that she’s trying to decontextualize or get rid of or recover from. Nonetheless, it keeps the audience guessing and it’s extremely fun to play as an actor. I’m able to play so many different characters, all within this one character.

BT: As a well-known and widely respected actress, your using your platform in order to work with GLAAD really makes a difference to a lot of people.

CP: Thank you. Exactly. I think that’s important, especially in this day and age, as so many people don’t feel like they’re being heard.

BT: Without giving away any spoilers, what can you tell our readers about the new season of Claws?

CP: Watch the first episode very carefully and see how each of the characters react to a certain incident, and then you’ll see the roads that each of them will be on this season.

BT: I was a big fan of True Blood and your character on the show. Do you still keep in touch with any of the cast of that show?

CP: You know, that was such a wonderful experience and I miss that show and I miss those people. I have such fond memories of all of it. I follow all of the cast on social media but everybody is so spread out all over the world, we have such an international cast. But just last week I was on the phone with Lauren Bowles, we were just catching up. Then I was shooting in Atlanta recently and I was able to see Stephen Moyer there. So we all find each other when we can and I certainly try to follow what everybody is doing and try to support their work. I love those guys! People still come up to me all the time and want to talk about True Blood and how much they love it. They talk about how they used to have viewing parties and how it shaped them. People were really taken by that world and it’s such a testament to Alan Ball and what he was able to do with that story. You could substitute any group of disenfranchised people for the vampires on that show, so everybody had a way in with the show. Even if you just wanted to watch it because it was entertaining or because there were a lot of hot guys on it, I mean there was always something that people were drawn to on that show! So many different types of people were drawn to that show, but then I could say the same for Claws! I have soooo many different types of fans that come up to me and talk to me about Claws – people that I would never expect watch it. So that’s exciting, to move into another show that resonates with people. That means the world to me and I feel so fortunate.