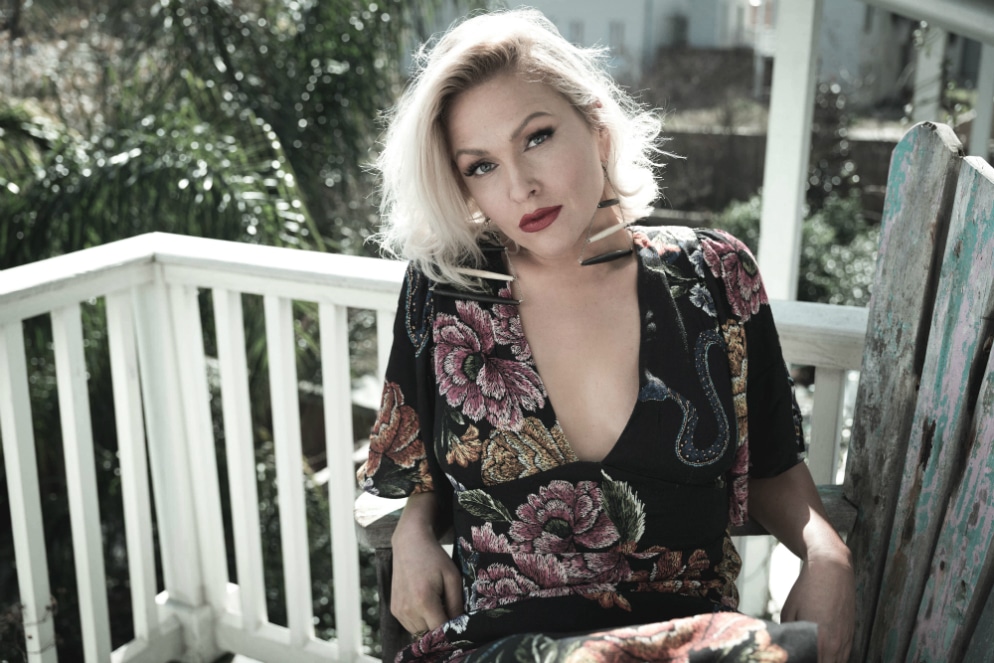 What was so amusing about talking to Jenn Lyon is the interview took place in mid-March and it was the offseason for Claws, so we couldn’t yet talk about Season 2 of the show. But needless to say, with talking points in hand, Lyon opened up about practically everything, as no topic was seemingly off limits nor did she seem flustered by anything. We talked about her comedy troupe POYKPAC, being the preacher’s daughter, being a Southerner, Huey Lewis and of course, Claws. The hilarious Lyon was one of my favourite interviews of all time.

Here is an edited and condensed version of our conversation with the fabulous Jenn Lyon.

Jenn Lyon: Geez, the best part?  That’s tough because the people we work with are so amazing and funny, and this includes the crew down to craft services as everyone there is hardworking and funny. Our crew is unbelievable, and we have the best writers, and they are amazing but amenable to collaboration. Yeah, it’s so wonderful and I love the girls and I love the boys and we just have the best time together! We still cry a little bit, but we laugh so much, I laughed so much. Sometimes I can’t even look at Carrie Preston because she is so funny and her fingers are so long and when I see them in the air doing things, I have to sort of look into the corner because it tickles me. Once you get the giggles, it’s like church giggles, it gets behind your eyeballs and you’re lost!

BT: I feel like your accent is a big part of your humour.

JL: When I first got to New York, I didn’t play any Southern roles until probably like seven, eight years here. I was afraid of being Southern. I thought it wasn’t…I don’t know what I thought. I did theatre training and it wasn’t, they sort of beat our accent out of us, to do the standard American accent, which can be neutral and I didn’t really audition for Southern things, I mean, not by choice, it didn’t really come up. I did a lot of Jersey or Boston or heightened British things, and then I started getting Southern things, people liked my accent and it came in handy. Now it’s a real boon to be authentically Southern. It’s kind of the only skill I have, acting is the only skill I’m good at, besides physical comedy. In school, they used to say, “Only do this, if you can’t do anything else”. I think that they were referring to passion, but I literally can’t do anything else, like I can barely type, I’m not handy in the least, it’s like the only thing I can do. [laughs]

Brief Take: What about growing up as the Pastor’s daughter?

JL: Well, you’re in a fishbowl. It’s like everyone is watching you, every time I left the house, my Mama would say “remember who you are and whose you are”, and I was like, “ugghhh”, so everything I had was tied to my Dad, who was trying to uphold the religion and my Mom, my mom was the Preacher’s daughter. She married one. My uncle’s a Preacher, we come from a long line of Methodist ministers.  It was difficult because you want to make good decisions and not bring shame on your family. I was really lucky because my parents were really supportive of me wanting to act and being in love with falling into things and fart jokes. It was embarrassing for them though. Growing up in the church, every time I walk into one, I’m like, “I know this layout”. It’s like a special sort of homecoming.

BT: When you’re doing raunchy comedy, do you ever cross yourself?

JL: Yeah, dude, of course I do! My Dad still hasn’t seen…I did this episode of Louie that was pretty raunchy and I say the word “pussy” in the first thirty seconds and my Mom calls and was like, “We can never let your Dad see this! And if anyone in the congregation sees this, I just don’t know, Jennifer!”. [laughs] I think that what’s interesting about Claws is that a moral compass is relative to what you need to survive. These girls are scrappy and are doing whatever they can to keep shit together, and I find that endlessly interesting. I don’t think that morality and ethics are the same thing at all. I think of this Oscar Wilde quote all the time: “Moral indignation is just jealousy with a halo on it”. I think about that quote all the time.

BT: POYKPAC was a trending topic so many years ago.

JL: [laughing] Yeah, man! We had a little hook in the viral scene, because we got in on the front edge of YouTube, like before there was a glut of online comedy, and we were just poor kids in Brooklyn borrowing a camera and going out into neighbourhoods. Luckily, Ryan and Taige in POYKPAC were just brilliant editors and we were all comedians. So yeah! We made some pretty cute stuff! I was in Williamsburg in a loft. They were actually living in a Williamsburg loft with eight other people. I was living in Queens in the kitchen of a sublet and I would go to Brooklyn every day, and eventually I made the switch.

BT: So you were like a hipster by association.

JL: I guess so. I guess so. [laughs] But we always felt so much more square. We were a part of the gentrification that we hated so much.

BT: Huey Lewis does say that it’s Hip to be Square.

JL: I didn’t know that we were going to talk about Huey Lewis today, but I’m so glad that we are!

BT: Do you like Huey Lewis & The News? The movie American Psycho was shot here in Toronto.

JL: [long laugh] Dude, you are hitting the deep cuts today! Do you like Sports or Fore!?

BT: I like Power of Love from the Back to the Future soundtrack. Yourself?

JL: God, it’s tough. It’s tough, man! I can see both of the cassette covers in my mind and my brother and I wore them both out, so it’s tough. And I went to a Mets game a couple of years ago and I think I pulled my own hair. I just got so excited and the little girl inside of me…I don’t know, it was like Beatlemania. It sparked something inside me that I didn’t know was there.

BT: So Huey Lewis is up there?

BT: What about right now?

JL: Oh wow, so many people. I’m crazy about Kendrick Lamar, I feel like I know all the words to Good Kid, M.A.A.D. City and Damn and To Pimp a Butterfly. That’s like my treadmill music.

BT: And the Black Panther soundtrack?

JL: Yeah, dude. I hope that Kendrick gets to be in the next one! I think he’s so awesome and I listen to hip hop a lot. I really like SZA right now, and of course I have a heavy rotation of Simon and Garfunkel and stuff I listened to growing up with my Dad. [laughs]

BT: How was Fish in the Dark and New York?

JL: Fish in the Dark was so great. Larry David is wonderful. He’s got this sort of cantankerous cover that I don’t want to blow, but he’s very generous and wonderful. I love New York! I’m definitely like an East Coast girl, I like to be mushed up against humanity. In L.A., you’re sort of isolated, either surrounded by actors, or in your car all the time. But in New York, you’re on the train, beside all walks of life. I really like that. I really like regular people. Not that actors aren’t regular people, but, you know, kind of a different breed.