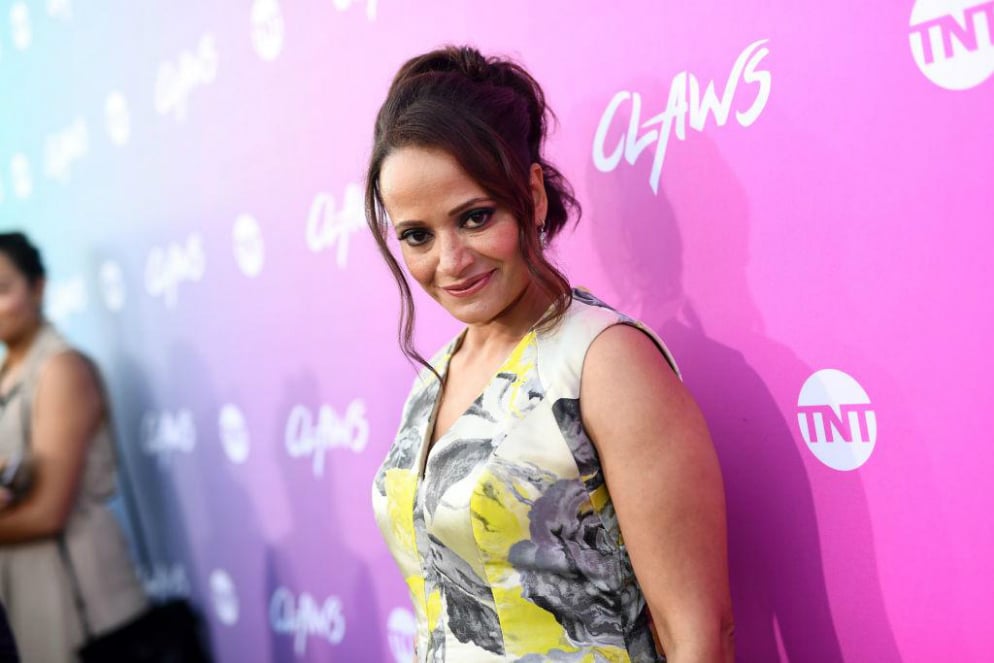 Judy Reyes is badass and that’s pretty much the best way to put it. We were amazed by the frank and open nature of Reyes in our phone interview and perhaps what surprised us the most was her frequent use of profane language that underscored the point that her performance as Quiet Ann on Claws (which is now on Season Two on TNT) is raw and real. Though she talks a little more than the character, that Judy Reyes takes no shite from anybody.

Here is a condensed and edited version of our conversation with the uproarious Judy Reyes.

Brief Take: How did you feel about acting and not really being able to speak on the show?

Judy Reyes: I wasn’t really concerned because the name of the character is Quiet Ann, so I was appreciative of the writers actually bringing me in to act for it because they discussed with me how to expand the role. I didn’t want to betray who she was. Eliot Laurence sat down with me and it was important to see how we get to see more of her. In Season 2 the stakes are even higher, they were so high in the first season, so it makes sense to see more of her this way.

BT: The show is so loud in every single way and yet you are so quiet.

JR: Unapologetically so, and yet every woman is different in her own way. Even Quiet Ann in her own way is really fucking loud. When you consider that Quiet Ann was in prison for assault for almost killing her girlfriend, maybe her choice to be quiet is just her way of loudness in that.

BT: Do you feel like the Claws ensemble is your crew?

JR: Absolutely! I think that we definitely are a crew in terms of our craft and what we do and how we respect each other, and exactly how we are in our own way, one hundred per cent. It’s a brilliantly written show, brilliantly cast, we one hundred per cent respect each other and what we bring to the role. Every woman is strong and funny and talented and really good and good to each other. Jenn Lyon has to be one of the funniest motherfuckers that I’ve ever met, as well as Carrie Preston. Carrie Preston is so quirky and so delicate and the powerhouse that is Niecy Nash will not be denied. She’s number one! She is strong and maternal and care-taking and really looks out for the show and all of us. Karrueche Tran is an absolute unicorn, and then the guys, who are all so unique and funny and strong and sexy and talented as well. But the women absolutely lead the show.

BT: You inspired many people by your appearance on One Day at a Time.

JT: Absolutely, and I was actually working on One Day at a Time when I got the call for Claws. I’m really good friends with Gloria Calderon Kellett, she used to write on Devious Maids. I’m very good friends with Justina Machado, and it was my absolute joy and honour to work on it when they asked me to. I’m so proud of that show. It’s such a strong, extremely well-written and acted show. I’m so glad that it’s coming back for a third season. It deserves every nomination and every honour it continues to get and I look forward to working on it again this season, should they ask me to. I could not be more proud.

BT: You happen to play a lesbian on both shows…

Brief Take: I loved your work on Scrubs, and I feel like it didn’t get enough appreciation.

JR: Scrubs is getting more love now, and I tell you, when I walk the streets of New Orleans, and I get eighteen year olds, nineteen year olds, stopping me and looking at me, like literally shocked to see me and are like, “you were on Scrubs“, and I was like, “Yes, I was, how old are you?”. I was like, “where are you watching, Comedy Central?”. I’m like, “wow, okay, thank you!”. It’s really mind-blowing how people are responding to it now, young people, which is so rewarding. Writers were responding to me bitching about writing, and okay, here’s the thing, I’m very actor-y, very New York, I was hired out of New York. I was like, “it’s cool, making jokes about me being Mexican, that’s fine, I’M DOMINICAN, am I playing a Mexican or am I playing a Dominican?”. We had all these white writers and they’re like really apologetic, like “shit, I’m sorry”, and I was like, “it’s cool. Don’t be sorry, it’s cool. I just need to know what I’m going to play, because I have a very East Coast accent, so I’m going to have to speak Spanish, I’m going to play a Mexican accent, so just let me know what to play”. And they’re like, “oh, oh, oh, we’ll just drop the joke”. “You don’t have to have to drop the joke. You just have to let me know, that when I do a Spanish accent, that’s all I’m asking, so I’m comfortable”. So what they started doing was actually fucking brilliant. It was Donald Faison, whose character Turk was my boyfriend, he kept forgetting that I was Dominican. And that way it was just part of a whole joke. It was brilliant! They were like, “Is that good? Is it good?”. I was like, “it’s fucking awesome, I love it!”. They stopped tip-toe-ing around me, they kept doing these Mexican jokes, I was like “what are you doing?”, and they were like, “oh shit, I’m sorry”. They kept making Turk fuck up instead of them fuck up, and it was just fucking perfect.