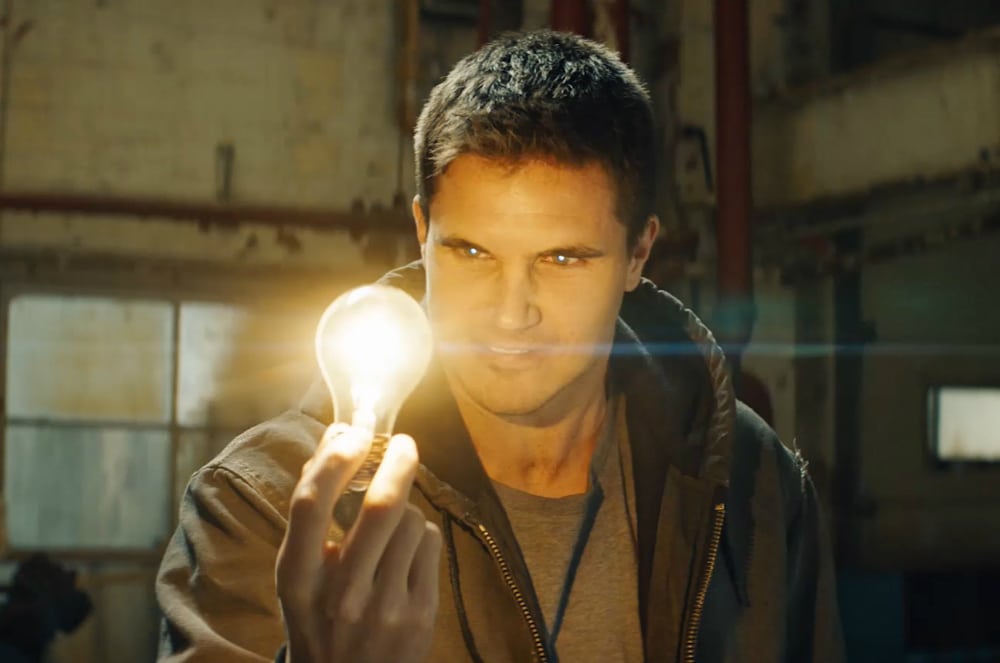 Robbie Amell has always been a welcome presence in his projects, so it’s great to see that he was involved in many aspects of the film Code 8. Amell launched (alongside his cousin Stephen Amell), the Indiegogo campaign to help get the film made, and more than 27k backers responded by funding over 1000% of the initial goal of $200,000! Moreover, the film, which is executive produced and starring Robbie Amell, truly looks great, and demands to be seen because it’s such an interactive presentation.

Brief Take spoke exclusively on the phone with Robbie Amell in advance of the Toronto stop of the Code 8 press tour and we were charmed by the kind Canadian boy (who lives in L.A. with his wife, actress Italia Ricci, and recently newborn baby).

The following is a condensed and edited version of our chat with Robbie Amell of Code 8.

*This interview originally ran on December 6, 2019*

Brief Take: Congratulations on becoming a new Dad this past September! Tell me about your whirlwind past few years from making the short film to the Indiegogo campaign to get this film funded, to where you are now.

Robbie Amell: Yeah, it’s wild. Four years from the short film on my front lawn in Los Angeles, and the relationships that we’ve made, and the entire process. We had 300 people pay to be extras and fly themselves from all around the world to Toronto and put themselves up to be in the movie. Things like that are mind blowing to me and I’m in awe of the support that we have from so many people and those are things that I’ll never forget.

BT: Your cousin, Stephen, is a major part of the film, and I heard that you only worked together one time previously, in The Flash, but no dialogue was shared between you two.

RA: Yeah, we don’t talk to each other as we team up for a fight, which was really fun. But it was great to actually work together and spend five weeks running lines and creating this movie and this world and putting it all together.

BT: I interviewed Kari Matchett just a few days ago for her upcoming show, and she is awesome, as is Greg Bryk, both of whom are your co-stars in this movie. What was it like collaborating with them?

RA: Kari was the first person for whom I watched an audition tape to play my Mom, and I phoned [director] Jeff [Chan] right away and I said: “Watch Kari’s audition tape, she is so good and she’s just like my Mom”, and I was like: “This makes my job way easier”, and she’s so much like my mom that…this will make everything so much more natural for me. And she was great, she didn’t even know about the short film until we were on set for rehearsals, and we were like: “Why don’t we show you the short film”, and she was like: “This looks great, I had no idea what this was”, and Greg Bryk was our top choice in the audition process. We narrowed it down to him and a few others. Greg was fantastic and just was so good from start to finish, throughout the whole process. He cared so much. He really brought so much to the character every day and really molded it into what you see on screen. The dialogue was there, but he really did more than we really expected anyone to do with that. Peter Outerbridge was the other person, who we really loved for Sutcliffe but it was a much different version of the character, and we asked him as a favour to us. He had just worked with my wife (Italia Ricci) on Designated Survivor, and we asked him as a favour to play the smaller role, when you see him in the club with Greg, in the hopes that if we do more, then we could have his character back, and he was gracious enough to be a part of the movie with us. I like that version of his character, the very put-together, very top of the food chain, whereas Greg’s Sutcliffe, we catch him at a point in which he’s unraveling, and Greg is so good at playing that. 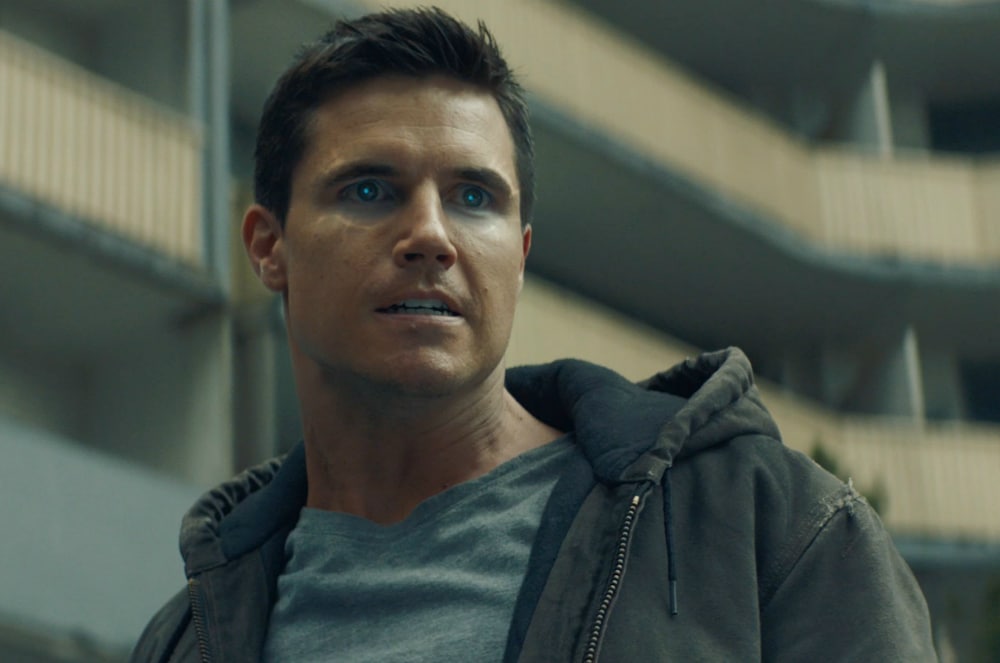 BT: This movie looks good start to finish and has a really captivating opening credits. How important was the visual aesthetic to you when you were putting together the movie?

RA: We had an unbelievable D.P. who also did the short film. His name is Alex Disenhof, he was one of the only Americans on the movie, and he’s a huge D.P., he’s now working on Watchmen, he comes from the big feature world and he became a good friend. And part of the reason that the movie looks and feels as big and as good as it does, is because we have really talented friends who were willing to work for pennies compared to what they would normally be paid on their regular gigs. They wanted to be there and make something great, and we all had a fun time doing it and now we get to [chuckles] stand by the work that we do together and be proud.

BT: Tell me about some of the filming locations.

RA: The warehouse in which we did the powers montage was really cool. And then I was watching Shazam! and although their movie came out first, we filmed ours first. [laughs] But they used the same factory for their powers montage, which I thought was pretty funny. I thought it was really cool. We shot in some real projects and the people who live there and around there were really great, they were accommodating for the filming. I think part of it was the way that we handled ourselves and took time to take pictures and hang out with some of the people who lived around there. We love Toronto and we want it to feel like Toronto without it actually being Toronto. No CN Tower or anything like that, but we grew up here, we wanted some of the Toronto DNA in it, but we wanted to created Lincoln City, so you’ll see some visual effects along the way just to give it this futuristic…not dystopian, but definitely not utopian future.

BT: You must be excited to be able to screen this movie in person with audiences.

RA: Yeah, I’m in Toronto right now and then Friday and Saturday in L.A., it’s great. Because of the Indiegogo campaign, we’ve already screened the movie in Toronto, Vancouver, L.A. and New York. We still have to do Dallas, Miami, which will be in January, we went to London, Sydney, Perth, we’ve kind of gone all around the world, which is really fun, and getting to share it with people who helped make it happen.

BT: You’re a huge sports fan. Perhaps you’ll get to explore that someday in a role?

RA: That would be great, I’d love to do a hockey movie. I grew up playing hockey my entire life, it’s been a lot of fun. But there hasn’t been a good hockey movie in a while.

BT: You have some really interesting projects after this one coming out as well. Could you speak to them a little?

RA: Code 8 has been so long in the pipeline, I’m really excited, I’m really excited about that, especially since it’s my own. Then, I believe in April, my show for Amazon will come out called Upload, which is Greg Daniels, who created Parks & Recreation and The Office. It’s his new show, it’s a futuristic comedy set in a world in which if you know that you’re going to die, you can upload your consciousness to Heaven, but Heaven’s run by these different corporations. And I just finished shooting the sequel to The Babysitter, which is the Netflix movie that I did, that will come out sometime next summer. Then I did a movie in Mexico City with Nasim Pedrad, who is from Saturday Night Live and Aladdin, and is so funny, and that one is called Desperados, it’s kind of like a girl’s road trip movie. That was a blast. I got to shoot in Mexico City for a few weeks, which was very cool. It’s a very exciting year.

BT: What has being involved in this project as an executive producer meant for your future in your career?

RA: I would like to continue to produce, eventually direct, but the greatest part about Code 8 is that it was ours. And between myself and Jeff Chan, who’s one of my best friends, who directed it, Stephen, Chris Pare who wrote it, it was really cool to get to set and write our own ticket, you know? If we needed to make adjustments, we could do it on the fly, we didn’t need to wait for word to pass down from the higher-ups, we did it ourselves, and for better or for worse, we’re proud of what we made and I actually think that people are going to dig it. 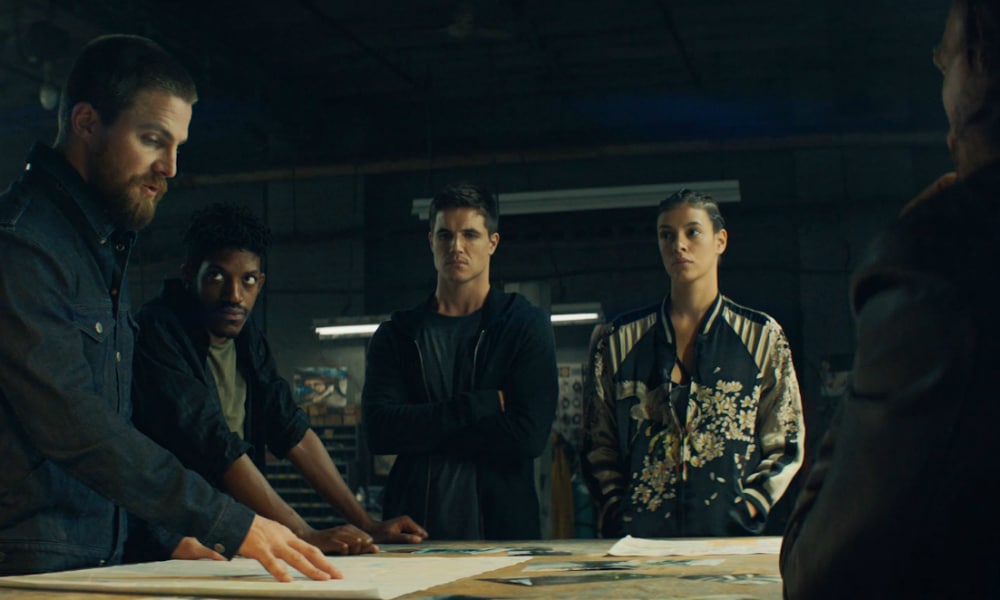 BT: You seem to be a frequent traveller. What’s your number one travel tip?

RA: My number one tip is no checked luggage, I only take a carry-on. Travel light and my iPad, I always keep my iPad with me pre-downloaded, so I have stuff to watch. Most of the airlines are pretty good. Air Canada has got a good selection of movies, but they don’t update it enough. If I’m travelling a lot, I have seen everything.

BT: Are you a big watcher of movies on planes?

RA: A lot of movies that I’ll see come out in theatres, I’ll save for airplanes, because I know that I’ll need to watch it somehow. But I just flew in last night and I watched Ready or Not which was very fun. Samara Weaving, who I worked with on The Babysitter, is fantastic in it. That shot in Toronto as well. Oh! I watched some episodes of Letterkenny as well, which is so good.

BT: You seem like a person that makes everyone feel welcome on set and off. Tell me about creating a good work environment.

RA: Thanks! Yeah, I think that it’s really important. I’ve been very lucky in that the people with whom I’ve worked, I’ve never worked with anybody who’s created a toxic work environment. I think that part of that is that if I saw that, I probably wouldn’t put up with it for very long. I’m very lucky to do what I do, and even though the days are long, I would rather do that than anything else in the world. If you’re going to be there for that long, you might as well have a good time doing it.

Code 8 is now available on Blu-ray

What She Said: The Art of Pauline Kael Review