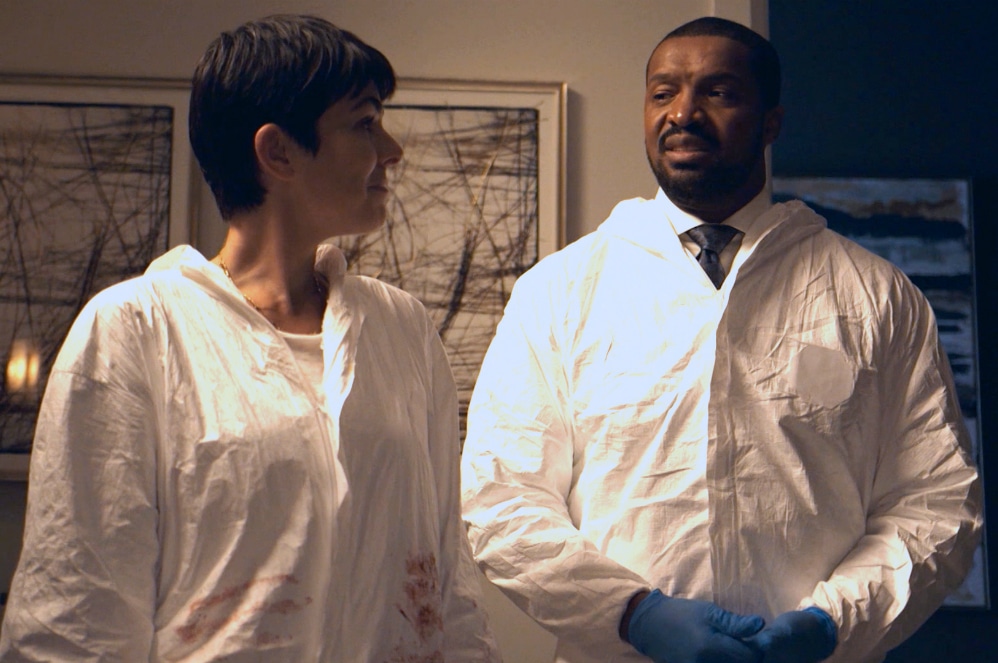 Perhaps the most buzz worthy new show of the year is the series Coroner, which debuts on CBC on Monday, January 7th at 9 p.m. (9:30 p.m. NT) and internationally by NBCUniversal. A major reason for its buzz worthiness is the presence of its leads, the classy Roger Cross as homicide detective Donovan McAvoy, and especially that of Serinda Swan, a mesmerizing presence on the screen as the star of the series (the coroner of the title, Dr. Jenny Cooper), delivering a career-defining performance.

We had the wonderful opportunity to sit down with the leads of the series at the CBC Winter Media Day recently. Cross is a familiar presence, acting in the locally-shot Dark Matter, and we were especially thrilled for the opportunity to speak with Swan, and the West Vancouver-born thespian enlightened Brief Take on a dark and yet emotionally uplifting role that she alone seems ideal to play.

The following is a condensed and edited version of our incredible chat with Serinda Swan and Roger Cross of the series Coroner.

Brief Take: What do you think helped the source material translate to the screen so well?

Roger Cross: I would say everything. What was great was that they charted it out, as most shows do, but they’d actually written the episodes. So you had that on which to draw, and they also had real-life pathologists and other homicide investigators to whom we actually talked, and they ran us through the paces, and we even went and saw an autopsy.

Serinda Swan: I think that one of the things that make us feel lived in is because we worked so closely with the creators to really work on the backstory, and make physical, emotional and mental changes beforehand, and so we’re not trying to figure out who they are on screen, unless they’re trying to figure out who they are on screen. The two, three weeks before I started, I cut my hair differently. I put on eight pounds, I changed the way I spoke, I changed my mannerisms in the way that she stands. There’s weird things that she does that I don’t do. I’ve been working in the States for the past ten years. This is the first thing, apart from Republic of Doyle that I did eight years ago, that I’ve come back to Canada to do. And I think there is this quality to the show that you see; you can turn on HBO, FX, Netflix, any of that, and our show would fit in perfectly there. Not just aesthetically, we’re such a diverse cast, in that diversity, representing Canada in a way, everybody sort of sank into the fact that this is the new face of Canadian television. And we’re excited to represent it.

SS: Fully represent it in all of its facets. And it gives you this sense of grounded rest, and we’re like “Okay!” We’re here for something that matters”. 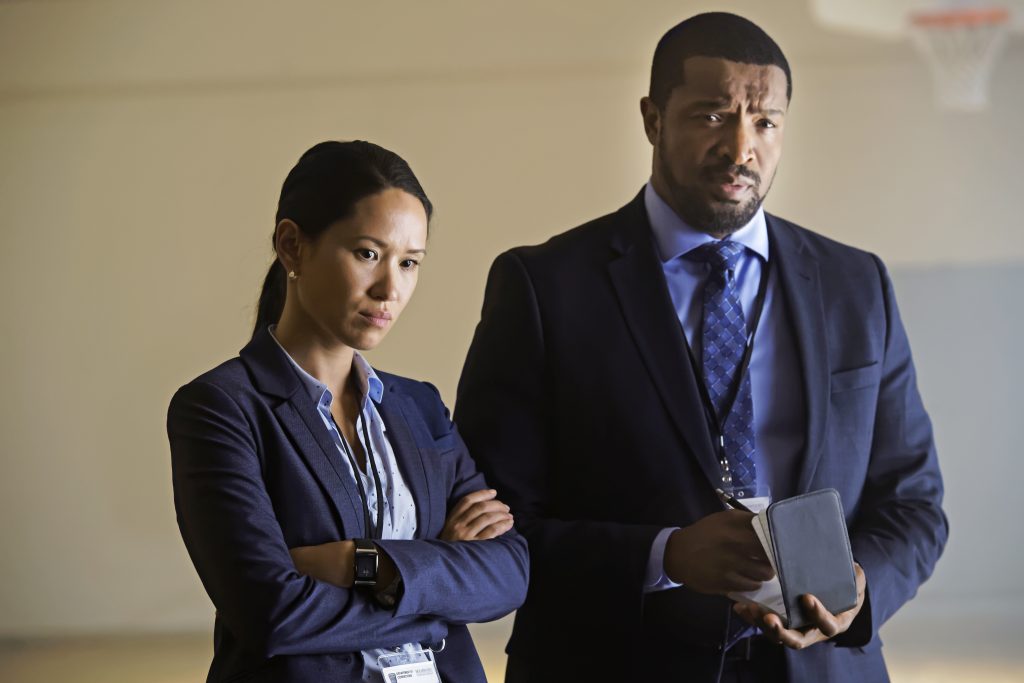 BT: Coroner is paced differently than a procedural, which is refreshingly unique and not something you find on any other show.

SS: Not on certain types of shows that I’ve seen. You don’t normally get that ability to let things breathe, and that’s what’s was gorgeous when I first started having this conversation with Adrienne (Mitchell) and Morwyn (Brebner), which was ‘that’s the way that I like to act’. I like to listen, think, and then react.

SS: It is! And you don’t get those opportunities! It’s a very European show. We’re very Canadian, but if we were anywhere else, I feel like we’d be on BBC. I agreed to do the show and they showed me this Bible that they had, every show has a Bible that has the description of the episodes and then imagery that they liked, the cinematography, the character’s journey, and I was like “Yeah! That is the next role that I want to take on, because it will challenge me in every facet as an actor, and that’s an opportunity that I haven’t been given before. So this is an incredible opportunity for me because I have always been putting up a box, based on my hair colour, my hair cut, the way I looked, and nobody took a chance to be like, “Yeah! Gain eight pounds, cut your hair for me, don’t wear so much make-up, we’ll put you in plaid pants and a blazer that doesn’t match. Let’s age you up.” You know, my character’s three years older than me and had a kid when she was 18.

It was interesting as a female, the kind of pushback I felt of aging myself on camera. And I was like [gasps] “What a historic idea of femininity!” I had to chance that as as a character that’s older than me and see how that works. But I think that all of that is why the show feels lived in, and why it feels different and moody and filmy, is because it’s human, it’s a very human show. 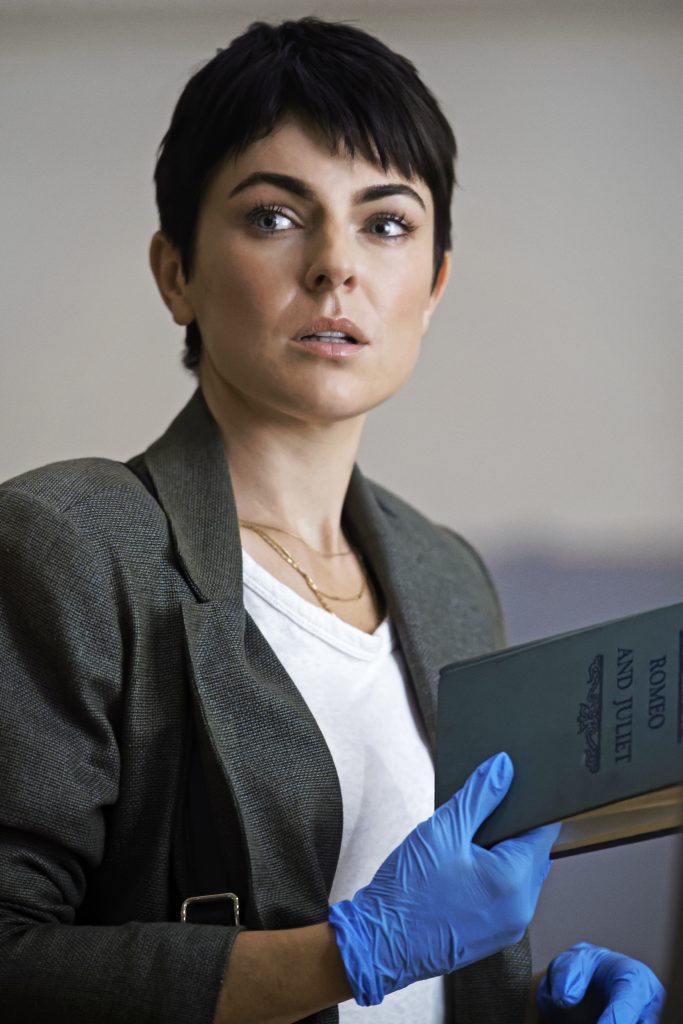 BT: You definitely fully inhabit your roles on screen.

SS: Oh, yay! That means so much as an actor, because…

RC: …We’re in bubble while making it, so we’re glad it translates.

SS: And people think you’re one-note, like “oh, this is Roger”, or “this is Serinda”, it’s that person doing this role, and I want people to be like “oh, you’re sort of unrecognizable!” Like “yeah, that’s so different than who you are”, and I’m like “yeah, that’s acting!” [laughs]

BT: How much do you bring from your previous projects?

SS: You have to leave it at the door because otherwise you start to become that one character that you just pull from it all. It doesn’t stretch you, it doesn’t push you, and that’s a lot of becoming an actor when you first start. It’s rare to get these roles that you get to morph into, so when you get that opportunity it’s so precious that you almost want to leave yourself out, but you can’t, you have to continue to go into that person. But whether it’s just supporting, whether it’s just holding, there’s not a lot of similarities in Jenny, other than I understand and get her. And yes, you have your personal anxieties of “well, what if this doesn’t land?”, and you have this sort of PTSD from projects gone awry, or there were promises that were broken of things that were supposed to happen. And you really have to go in trusting and knowing that you’re held, and not really caring about the outcome. Like you have to just go in for the story and the character and then what happens with it is what happens with it. For example, I didn’t want to watch any of the dailies. I was like “I don’t want to trust for myself not to become self-critical”.

RC: I don’t want to bring anything back. I just want to tell this person’s story, that’s the key. 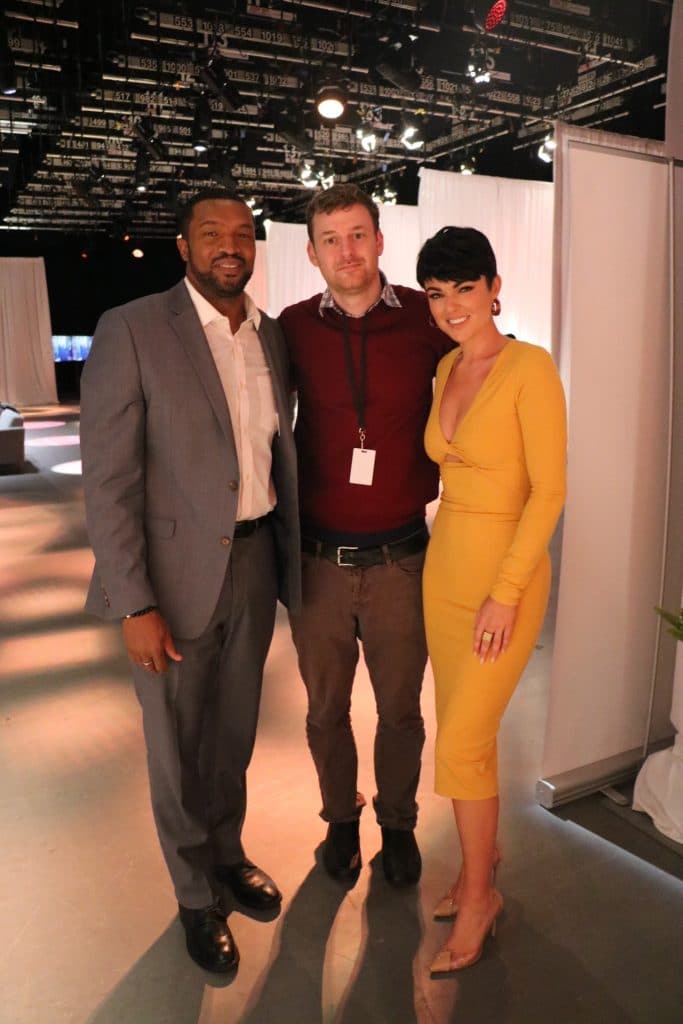 BT: The show also has tough subject matter at its core and yet it doesn’t moralize.

SS: I’m so happy that comes through! We’re not trying to tell a story with a moral compass because Jenny is trying to find her own moral compass. She was held by the pillar that was her husband, and told what to do and what not to do and how you act and how you’re supposed to be, and you see her very held at the beginning. My example is that she was like a Stepford Wife at the beginning. And then once he’s gone, it’s this unraveling of this human being, and she doesn’t know what her moral compass or backbone is. She doesn’t know what’s right and wrong. She’s suddenly attracted to another man, and she’s trying to help her son, and she’s worrying about how she is going to be perceived to her son, but then doesn’t give a shit with how she is perceived with the people in her work. There’s this really interesting movement. So we want the audience to be as off-balance as she is.

RC: And to see this growth and this evolution that’s occurring, I think that is what is going to be fun for people to see.