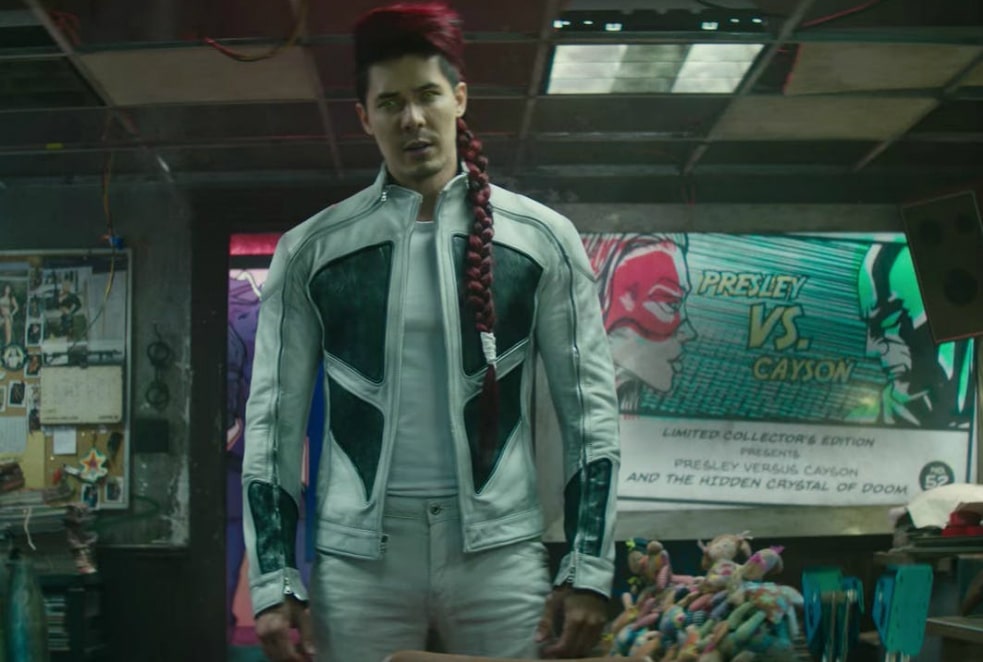 Half-British, half-Asian actor Lewis Tan is a rising star that’s about to become a household name. 2018 is a huge breakout year for the martial arts-trained leading man as he’s featured prominently on Iron Fist (his Zhou Cheng only appears on one episode and yet message boards are full of glowing comments about his lasting impression) and he’s about to gain many more fans as kickass mutant Shatterstar in Deadpool 2 and the “hopeless romantic” Gaius Chau on AMC’s Into the Badlands.

Here’s an edited and condensed version of our fascinating chat with Lewis Tan:

BT: What did you like best about working on each production?

LT: Well Deadpool 2 is a very high profile film and was very secretive because you wouldn’t get the full scripts all the time, you’d get a few paragraphs. The dialogue that I did in the film, for the scenes that I did, there was a lot of stuff that wasn’t used. But the stuff that was used, they told me what to say on that day, so there wasn’t much time to prepare. It was very secretive! And yet it was a really great environment – very easy going, light and friendly and there was a lot of improv. You have to have that energy where you’re not afraid to fail or say weird stuff, which Ryan is a genius at. He has great energy! And then with Into the Badlands, my favourite part about that was working with the legendary fight choreographer Master Dee Dee Ku and getting to be on a show where Asian Americans are looked at as heroes means the world to me. I’m very proud of both.

BT: I read that you loved travelling around the world for the filming of Into the Badlands but, as a Canadian, I have to ask what was it like filming Deadpool 2 in Vancouver?

LT: Oh I mean Canada is beautiful! It wasn’t my first time going there. I love it there because the people are really cool and in Vancouver they have great Chinese food. [laughs] The people are very friendly and it’s a beautiful city and I had a great time there. I didn’t get to see too much because I was very busy but I love it. Hopefully I get to explore the city more soon. I actually want to go there on vacation and explore it. Ryan told me of a couple of cool places to go to but I didn’t get to see them all. Ryan is so proud to be Canadian and the jokes in Deadpool 2 about Canada are just so ridiculous in the best way. Probably the best post-credits footage of all time. I think it’s cool that he shows his support of Canada that way. The whole country really supports him too and I got to see a little bit of that in Vancouver. It was awesome.

BT: It must have been a really fun film to shoot!

LT: It was! You know the X-Force – Terry Crews, Bill Skarsgård, Zazie Beetz, Rob Delaney – we had a really good time on set and off set so the energy there was really good. Hopefully that extends into the X-Force movie that’s currently being talked about right now. The movie is definitely going to happen but they’re still working on the story and also waiting until Deadpool 2 gets released and seeing how that goes over with the fans. So far we’ve gotten an amazing response on social media and I would love to be a part of a spinoff movie. I was talking to Terry on the red carpet in New York and he was like, “man, I want to do an X-Force movie with you!”, so hopefully it all goes ahead and you get to see more of Shatterstar. I know Bill is doing It 2 right now in Toronto but he loves the X-Force and hopefully we can get the gang back together. BT: There must have been a lot of pressure on you from the fans to properly portray Shatterstar because he’s such an iconic, groundbreaking figure in the comics. How familiar were you with the character prior to filming and what sort of research did you do to prepare for the role?

LT: I didn’t know too much about him ahead of time but I had the action figure when I was a kid, so I knew he looked awesome. [laughs] I did do a ton of research and when I was in Comic-Con I picked up every comic I could find that had Shatterstar in it. He has a wild back story though. It would take two or three films to really get his whole story down because it’s just crazy. But to answer your question, I definitely felt pressure but I also felt like the character himself has so much depth to him and he’s such a great character because of how modern he is with his sexuality and how open minded he is. It was a pleasure for me to play that character and it was a pleasure to play a character who hasn’t been represented before. I’m such an advocate for him and what he stands for and it was fantastic playing him.

BT: What was it like putting on that costume for the very first time?

LT: Yeah it was so surreal! The wig is really heavy and it’s hard to do the fight scenes in. We shot a few different fight scenes and they didn’t use all of them. They used parts for the trailer but we shot a bunch of stuff and it was hard to navigate it all with the hair. But I definitely looked in the mirror that first time and thought, “holy shit!”. [laughs]

BT: Then there was all that secrecy surrounding the production and you probably couldn’t even tell anyone about it.

LT: No one! Not even my parents knew. I couldn’t say anything because you know how parents are – they would tell everyone! [laughs] I was sworn to secrecy. The director, David Leitch, he’s an incredible comedic and action director and he’s definitely the future because he’s made some amazing films so far. But he turned to me and said, “look, if you say anything, I’m going to come over to your house and that’ll be it for you”, and I believed him! [laughs] He comes from an action background and you don’t want to mess around with Dave. [laughs]

BT: As a director he really understands the craft that goes into executing those jaw-dropping action sequences. You don’t really get that with other directors of films in this genre.

LT: I agree! I mean a lot of directors hire second unit directors to direct the action. When you’re directing an action film, you have to have the knowledge of how you’re going to cut it and how you’re going to shoot it so that it’s not left up to the editing room to decide how your film is going to be made. Dave is the perfect person for this. He has a background in stunts and in fight choreography and in second unit directing, so he really was the perfect candidate for this movie.

BT: With this movie, you’re going to be a role model to so many young Asian American kids who’ll finally get to see themselves represented on the big screen in a big blockbuster as a hero. Do you see a shift in the film and tv industries to cast more Asian American actors in leading roles?

LT: I do. I started to see it a few years ago. I’ve been around in this business since I was a kid because my father, Philip Tan, is a fight choreographer and I’ve seen him play villains throughout his whole life and I’ve seen how the industry was going with Asian Americans and how we were stereotyped. We used to be kept in the background and that’s not going to happen anymore. I’m not going to stand for it and I’m going to do everything in my power to represent as much as I can on an equal spectrum. I had kids coming up to me at Comic-Con and although at that time I was playing the villain on Iron Fist, with a half burned face, they were still emotional to see me. So to have this happen to me is so inspiring. When I was in New York for the premiere of Deadpool 2, I had fans coming up to me in a very emotional state and I know why. It’s silly, it’s a comical superhero movie, and yet it really isn’t because Asian Americans so desperately want to see themselves represented on screen as heroes. All people need to see themselves like that! For me, anything I can do to support that movement, I’m here for it.

BT: Who are some of your role models?

LT: Well I have a lot of people who have mentored me and helped me but my role models, per se, don’t really come from the industry. My parents are my role models. My father came from nothing; he grew up on the streets and was abandoned when he was a child. He was living on the streets for years and won the national title in martial arts, and then he won the national title in gymnastics. Then he was disco dancing and then he was working with Spielberg and that’s someone who inspires me. My mother too – she raised four boys, four crazy boys. These are people that inspire me. Also, people that paved the way for me to do great things, such as Bruce Lee and great directors and artists who have changed the path of history. My mother and father haven’t seen this movie yet so I think we’re going to go together to see it on Sunday. BT: What’s coming up for your character, Gaius Chau, on this season of Into the Badlands?

LT: My character, Gaius, just premiered last week and social media went crazy over him, so that was cool. I had a fight with Dean-Charles Chapman from Game of Thrones and people went nuts over it! So now you’re going to see me every week. If you liked me in Deadpool 2, you can watch me on Into the Badlands on AMC every Sunday night and see me chop people up. [laughs] It’s an amazing show and we put a lot of work into it. We were there for nine months and it was a life changing experience. The quality of work that came out of it from everyone involved was just phenomenal. I can’t wait for people to see this season because I think it’s the strongest season so far. 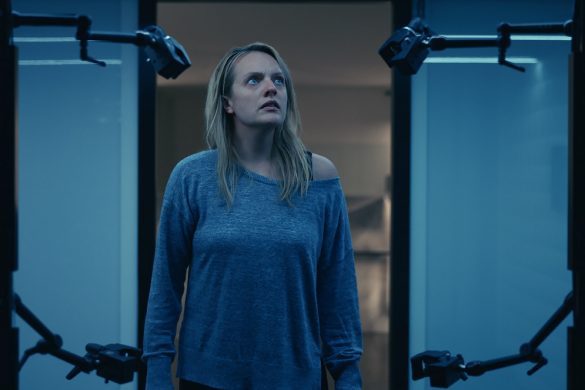 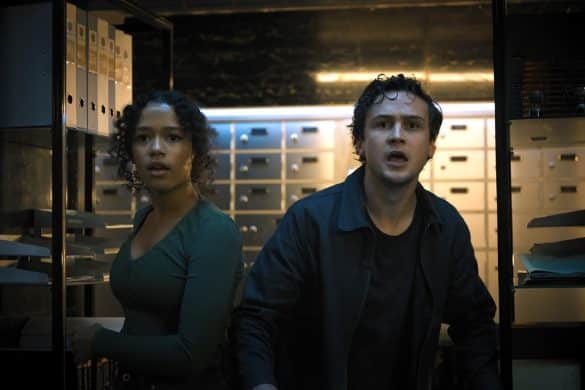