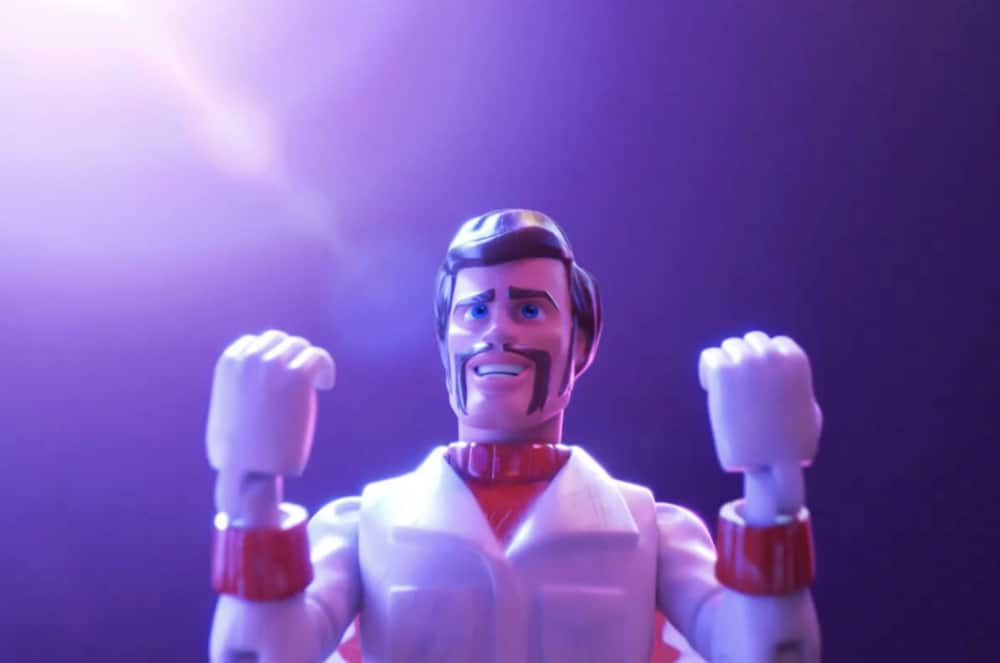 It was the afternoon before the Toronto Raptors went on to clinch the NBA Championship and the patriotic energy in the downtown core of Toronto was palpable. In an intimate suite at the Shangri-La hotel, a group of local reporters (myself included) were feeling particularly proud of a different Canadian star – Duke Caboom. Voiced by the Toronto-raised Keanu Reeves, the animated Caboom (a Canadian stuntman toy) is one of the newest character additions to the Toy Story franchise, and already one of its most beloved.

We had the special opportunity to sit down with Disney’s Vice President of Marketing, the charming Greg Mason, as he recounted his personal involvement in Duke Caboom’s evolution, how the character was meticulously crafted, and lots more in-depth insider details about Caboom. A gifted storyteller, here’s Greg Mason on the character of Duke Caboom.

On the genesis of the character:

So we’re just a little bit excited about Duke Caboom, as you can imagine. It’s actually been three and a half years in the making, it’s crazy. I’ve been dying to talk about it! So this started back, if you remember for Zootopia, we had Peter Mansbridge and that became a cameo that turned into Peter Moosebridge. I’ve been working with Disney Animation for a long time and we just love to insert a little bit of Canadiana here and then, we thought that was a ton of fun. They let us cast and it was great.

Well at Disney we have the two animated streams, both Disney Animation and Pixar, and they watch what everybody else does. In the parallel past, Jonas Rivera, who is a producer on this film, has become a very good friend. We’ve had him up to Toronto twice, I see him in San Fran when I go down, and after Up, he was working on Inside Out, another one of my favourites. I’d always say “Hey what can we do? A little something for Canada?”, and he said to me “You know what, Inside Out – Canadians are going to love it”. Riley plays hockey, there’s a map of Canada in the background in the classroom, and there’s a Canadian boyfriend, if you remember the duplicate Canadian boyfriend. So he said “that’s for you guys”, and I said “oh thank you so much!”.

Then he saw what we did with Zootopia, and I got a call one day out of the blue and he said “OK Greg, we’re going to do it for Toy Story 4. We’ve got something in mind for you.” And we started to hear about this great Canadian daredevil, and they were really wonderful to work with. They let us give notes on the character, the design – we added maple leafs in numerous spots, there’s five maple leafs – and we also sent notes on casting. The group at Pixar, they’re so detailed, I mean I don’t need to tell you guys that – you see all of this stuff. And right away they said that it had to be a Canadian playing him; I didn’t say it, they said it. Then they said “well who do you think?”, so our team got together and we gave some suggestions, but not knowing the character – the filmmakers know exactly what they’re after – but Keanu was on our list. They called and said “We’re so glad Keanu is on your list. We love the idea of Keanu”.

So they brought him in, and they had him do a read, and it was just magic from there.

As you know, he gets right into his characters when he does any project. When Josh Cooley (writer/director of Toy Story 4) and Jonas Rivera had him at Pixar, for anyone who’s been at Pixar there’s this massive open atrium, it’s kind of a social cafeteria area where everyone gathers. So they were at a table there talking with Keanu and they were explaining the role. Keanu was already saying “Ok now I see him and I can feel who he is, this character”, and he literally got up on the table in this cafeteria and started posing like Duke does and did all these poses. And they said “That’s Duke Caboom”. All that got translated into animation and brought to life. So much of what he brought to the character got translated to the art as well, not just the voice. 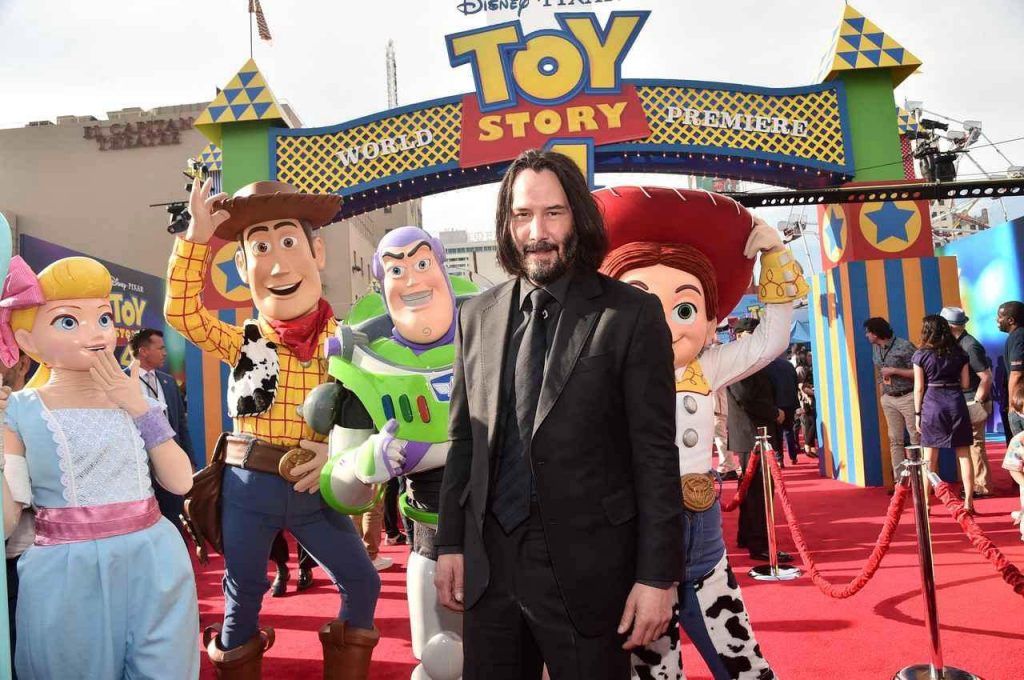 On the Canadian government’s involvement:

One of the other fun things that we had when we were doing Duke is we started looking at the Canadian flag and the use of the maple leaf and trademarks and restrictions, you know Disney is very careful on all of these things, and we worked with the Canadian government. I had the privilege of working with the Heritage Minister and bringing him into the process. As you know, Duke crashes through the maple leaf, so we wanted to make sure that the Canadian government knew what our intentions were. This was never intended to be an apologizing character that jokes about maple syrup and beavers, right? There’s none of that in this film. It’s just a great Canadian character! And there’s lovely nods, like to Boxing Day and he jumps over the rink that many of us played with, and we had great support from the Canadian government. Then when we launched the character, the Twitter handle @Canada, we didn’t even ask, they pushed it out, they were so excited. 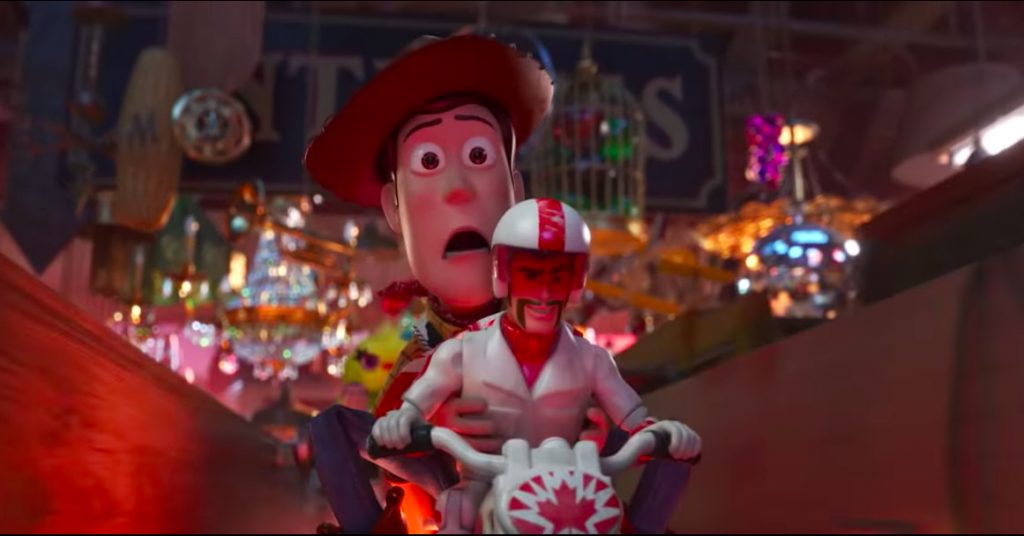 On more Canadian connections with the movie:

What Pixar is wonderful about is just letting us do things and figuring it out here. They’re very supportive. They kept us informed every step of the way. The very first shot I got of Duke Caboom, Jonas sent me a photo, no comment just a photo. So I open this email and I open this photo, and I don’t know how he managed but he had a box of Timbits. These guys think of everything! The other thing I want to show you is, these are the animators that worked on Duke Caboom. (photo below) Every single one is Canadian. They wanted to do a shot of all of them and all in their Canadian garb. So they really thought this through, and I didn’t have to tell them that, that’s how Pixar thinks. They made this very special and our whole team is very proud of this. 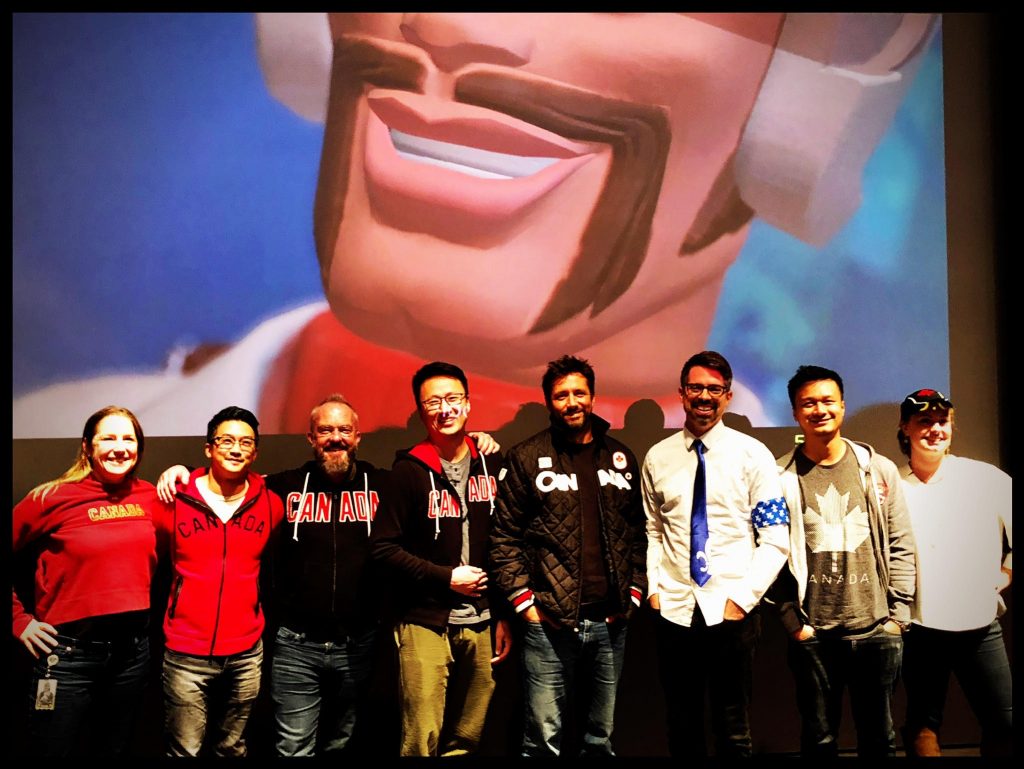 I’m a proud Canadian, and I think our whole team are proud Canadians. That character was quintessentially Canadian and that whole message, “Yes I Canada!”, is such a great message, and it’s a great time to be Canadian. All the wonderful things happening on the world stage as Canadians right now, and this character was embraced world wide. This is not just running in Canada and the U.S., watch it in Japan and you’ll see it. All of my colleagues right across the globe, who I know very well, they think it’s great, because Canadians are very well thought of on the world stage. So it’s playing everywhere and it’s something that we’re incredibly proud of.

*Correction: Only Emilie Goulet, Steve Hunter, Graham Finley, Guillaume Chartier and Benjamin Su are Canadians in the photo. Everyone else wearing the Canadian gear were honorary Canadians that day when they showed the Duke Caboom sequence to the Director for the first time.*