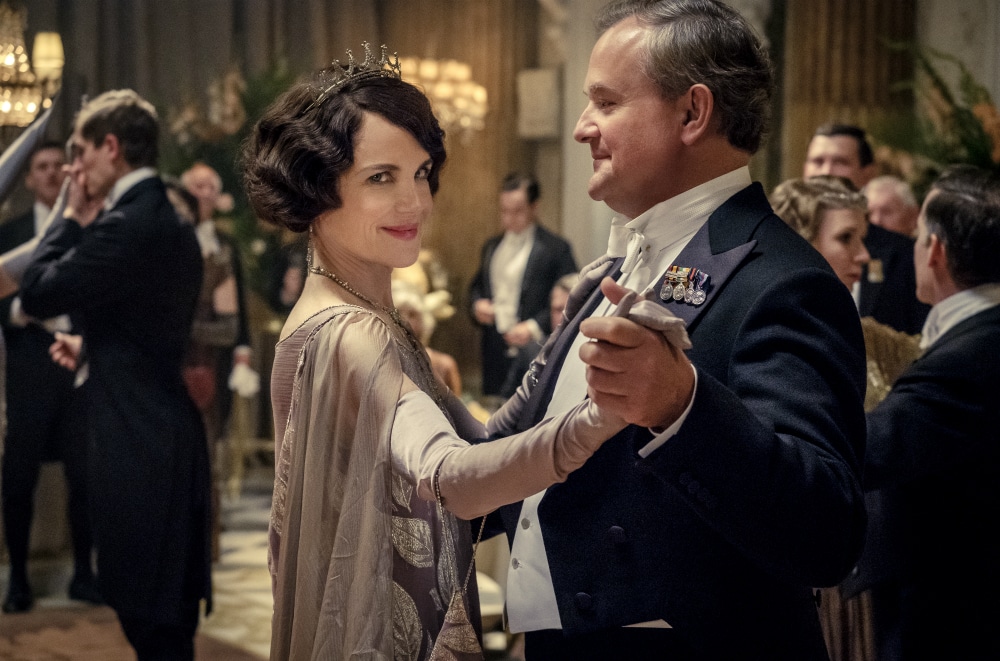 The portrayer of Lady Cora Crawley (Countess of Grantham) in Downton Abbey is screen legend Elizabeth McGovern, and we spoke to McGovern in a recent phone interview timed to the home entertainment release of the Downton Abbey movie. We were thrilled to discern that McGovern has a refreshing, no-nonsense approach in discussing the film and her recent experience as a producer (from a project that stemmed from Downton).

The following is an edited and condensed version of our candid chat with Downton Abbey‘s multitalented Elizabeth McGovern.

Brief Take: How did you feel about the return to Downton and how do you feel being a forward-looking American in England both in the movie and in real life?

Elizabeth McGovern: In terms of coming back, it was so easy because it was so familiar and I think there was a sense of confidence in all the cast that made everything very relaxed, and you can only earn that after working as a team for many, many years. It was a real pleasure to come back and to do. As to the second part of the question, being a forward-thinking American (in real life and in Downton), I take it very seriously that I kind of represent the kind of best of America, in a sense [chuckles] in Downton Abbey. The potential for America to be something that embraces change and can welcome and afford new ideas, these used to be the kind of things that you used to associate with America. And so if that’s what I am in the show, then that would make me proud. And I think that is the intention of that character, of Cora. She is quite resilient because of her ability to embrace new ideas that she can perhaps do with more ease than her English family. 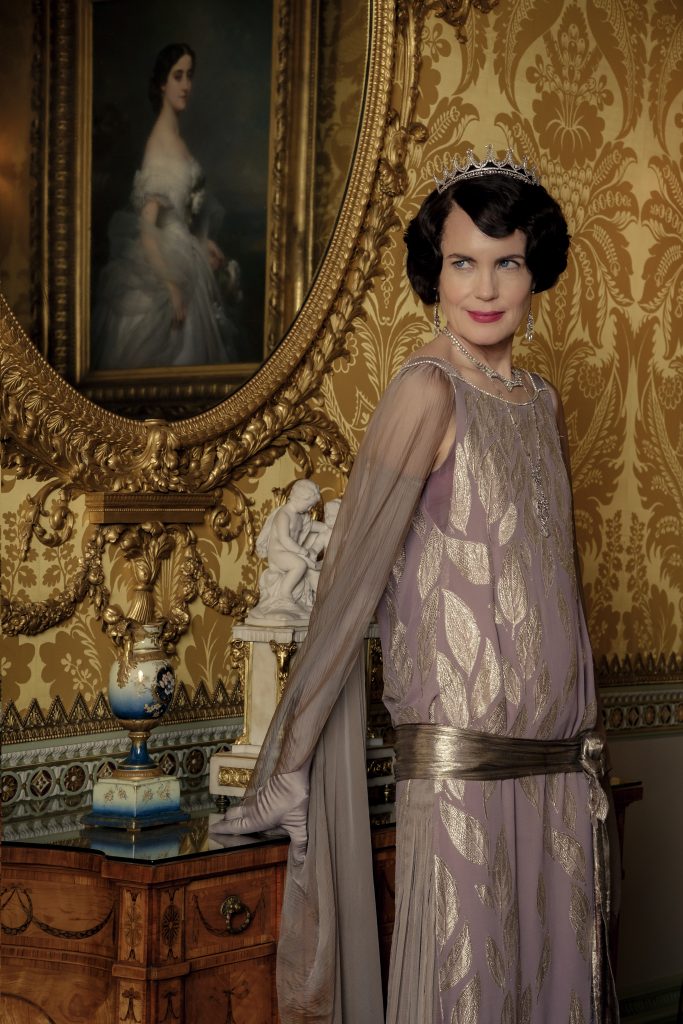 BT: Tell me about the scene in which the King and Queen are coming to dine and Downton insists on using its own staff to serve the guests?

EM: Well, I mean when you think about it, it is fairly extraordinary that you would have a houseguest that was taking over the running of your house. And thank God there was that story in the film because otherwise there wouldn’t really be any story. [laughs] I’m not sure if I had any more of an interesting feeling than that. It was at least a story for the film.

BT: You wore a stunning vintage gown in this film which must have made an incredible experience at the ball.

EM: Yeah, the challenge of that was actually doing all of that while dancing with Hugh Bonneville. [laughs] But he and I would always make each other laugh at the dancing, so it was not cracking up whilst the camera was on us that made that the most challenging of all. And moving the skirts around is not as easy as it looks! [laughs loudly] But that was one of my most enjoyable days, I definitely loved the challenge of…for someone like me, it is not easy to wave and talk and not to have Hugh step on your feet all the same moment. It was one of my favourite days.

BT: Was there a particular moment in which you realized that this show was really connecting with people?

EM: I didn’t have one particular moment. I suppose that there was a series of little moments. When I was first starting to promote the series in its first year on tv in the U.S. and the first question that I got in this morning talk show was I guess, “What is it like working with Judi Dench?”, because in America, all these dames, these English dames blurred. And then to come back in the next year and have had it be everybody be talking about it being Maggie Smith and the way that it had absolutely exploded, I suppose, between the first year and the second year of coming to do promotion in America is what really hit home for me, that it was on a trajectory that was unusual. 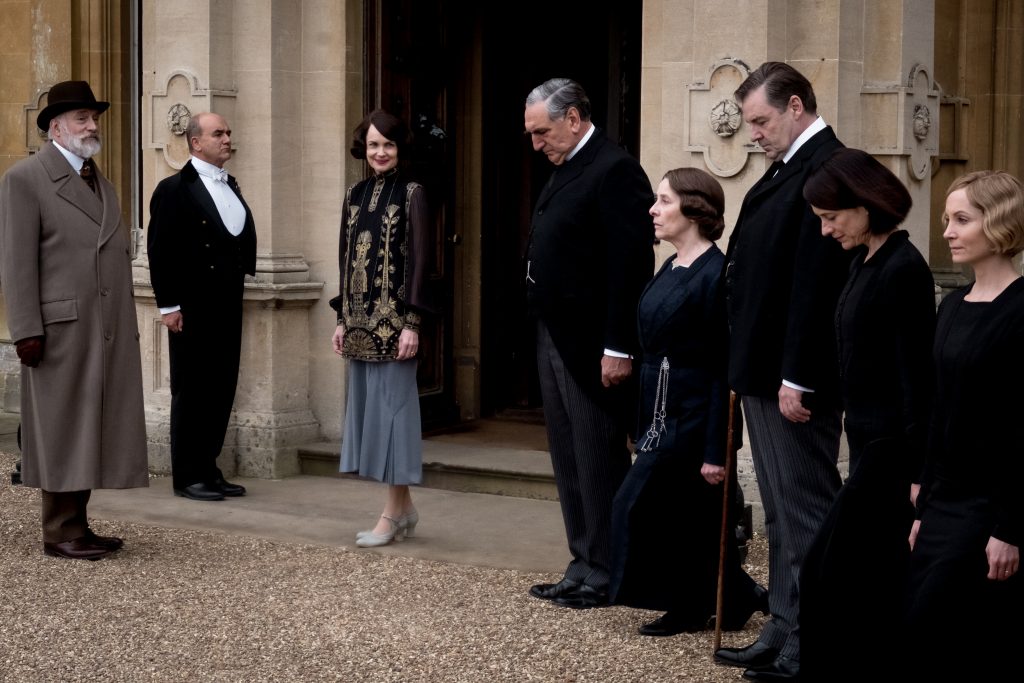 BT: The final shot of the film is the house itself and leaves room for a sequel as it looks into the future. Why do you think that it’s important to look backward in order to move forward?

EM: Well, I think that it’s very, very important to always look backwards because if you don’t, you’re always confined to make the same mistakes that you did in the past over and over again, so I think that for all of us to constantly look back at our history is vital. So I’m very proud to have been in a show like Downton Abbey or a show that is now playing: The Crown. It should be a way at looking at history and change but it’s not dry and is fun to watch. But to assess your own behaviour and culture in which you are presently living, in relation to where you came from and your past is very, very important to help you understand yourself and not be confined to make the same mistakes over that you perhaps did in the past. I think that it’s absolutely vital that we continue to do that.

BT: Do you believe that we are at an especially crucial point in history right now?

EM: Oh yeah, I think that there is no one alive that doesn’t feel that on a certain level. And my feeling is that the most important thing of all is to not ourselves continue this momentum that seems to be taking over, which is pulling apart from one another and dividing into camps that cannot communicate to each other. When you think about it, the only challenge that is really facing us that makes all the others really meaningless is the challenge of climate change. Because if we continue as we are now, in terms of ignoring the climate change problem, that nothing else will matter. I mean we won’t have a world in which to live [chuckles] and the only way that we can deal with climate change is by pulling together and cooperating with one another and connecting to one another. This is the most important thing to be addressing and looking at and talking about at the moment. 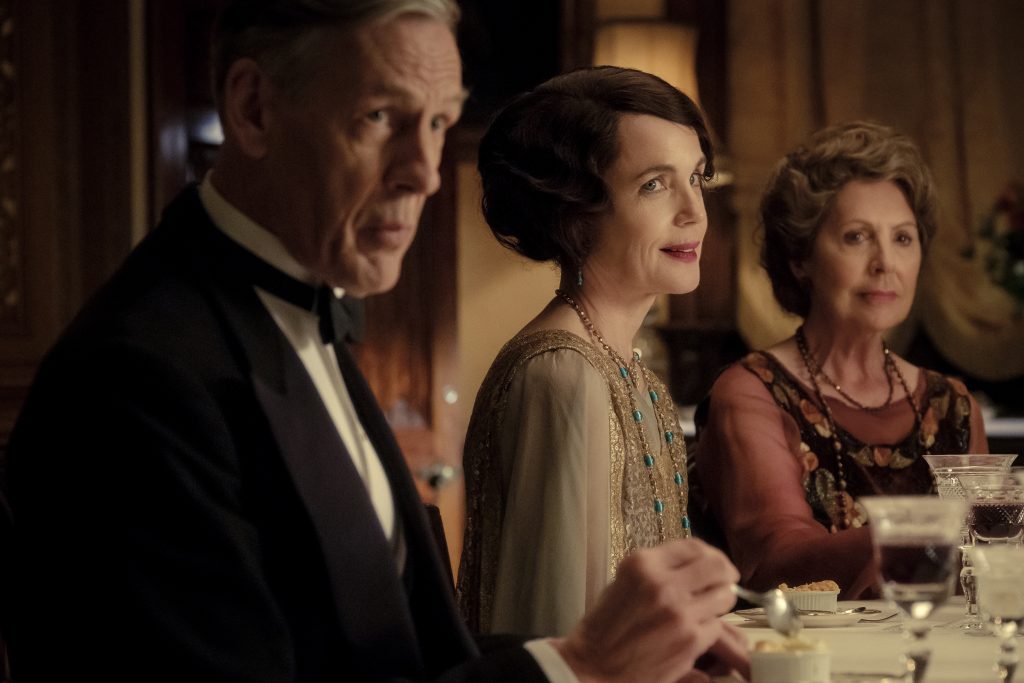 BT: What was it like to bring your on screen daughter Michelle Dockery on stage into the singing realm?

EM: Oh, that was joyful. We had so much fun! It was really easy and Michelle’s such a great singer, and the buzz that you get from the connection of music, and music is something that connects the world, connects people, and I think that’s why I’ll always be addicted to it. And I’ll feel its value – its value is that we overcome our differences in order to make it. And everybody, no matter what your race, no matter what your economic background, there’s always some kind of music to which you can always respond, and I hope that it will always be part of my life.

BT: What did producing for the first time with The Chaperone bring to this experience?

EM: Ah! Well I loved producing The Chaperone. Even though it was very, very challenging for many reasons, but I really loved being part of the conversation behind the shooting of it more than just being the in front of the camera person. It is so liberating for me to be at the grown-ups table, talking about how we were going to develop the story and get the film done and all that. I loved being a part of that process. I don’t know whether it had any kind of bearing on my work as an actress in Downton, I don’t think that it did, really. I kind of went back into my old world, my old dynamic, just being the actress on that one, but I miss the sort of stimulation of being part of the behind-the-scenes team. I loved that part of The Chaperone– I really did.

BT: You’ve discussed how at this point in your career that you are receiving interesting roles, as well that you were a producer for the first time with The Chaperone. Do you think this shift is coming about due to a change within the industry?

EG: We’re having conversations more about the issue now, so for that alone, I’m grateful. And having conversations about the way that women had historically been treated and not listened to and I think that is changing. I don’t know if you can honestly say that it’s resulted in more roles for women, I think possibly, likely, yes, but we’ve still got a long way to go if you look at the statistics. And if you see the movies that are out- right now, the big movies that everybody are seeing are all about men: The Irishman, Once Upon a Time in Hollywood, Joker. It’s always those big movies that are highly promoted are all about men. We still have a ways to go, but I feel like my daughters have a completely different expectation in terms of what they will accept for themselves than I did and I think that I have a completely different expectation than did my mother. And it’s changing in a good way, but it’s slow. It’s very slow. 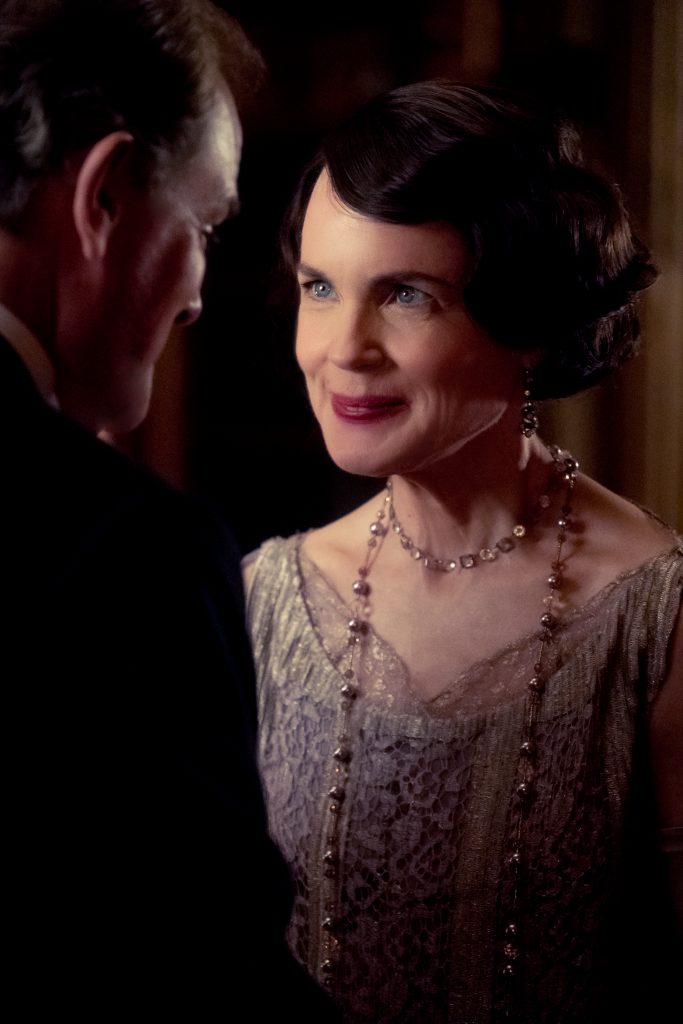 BT: Do you believe through your recent projects that looking into the past informs the present?

EG: Well I think they are relevant to the projects. Because I don’t think that human beings in their potential core change that much. But I think that it makes us understand the present, when we look from where we came. When you look at the people that were not long ago our ancestors, in a world like Downton Abbey, it helps you to understand things that are part of your cultural inheritance that inform the way that you think and behave. And maybe teaches them in a way that we behave today for better or worse that is different, but I wouldn’t say that they’re more like the present than today, because I think people did think and behave superficially in different ways and had different expectations for themselves and dealing with situations. But I think that at our core, the things that makes us human never changes, probably since the world began. I just finished reading Don Quixote [chuckles] and I couldn’t believe that it was written in the 1600’s, because the situations in it are exactly the same as we are today. Human beings don’t really change, it’s everything around them that looks different. 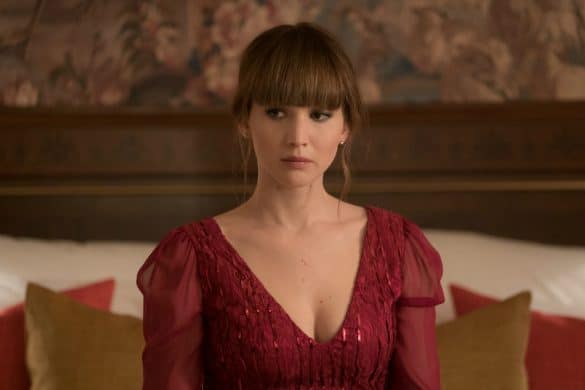