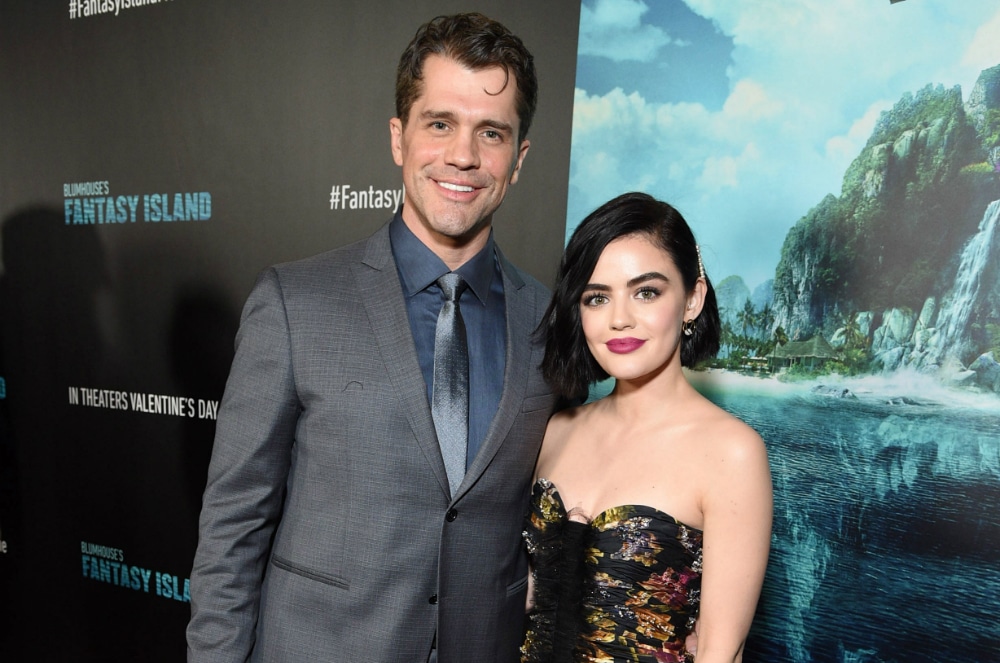 On the stunning Fantasy Island, your dreams can suddenly become a reality. It works like this: you get one wish, and the only rule is that once you’ve spoken of your wish, you must follow your fantasy through to its completion. Without spoiling any of its many surprising twists and turns, that’s the basic premise of Blumhouse’s Fantasy Island. The movie takes the bare bones of the popular ’70s TV show and turns it all on its head, as the film’s star, Lucy Hale, puts it. This marks the second time Hale has collaborated with director and screenwriter Jeff Wadlow under the Blumhouse banner (the first being Blumhouse’s Truth or Dare) and the duo have an adorable dynamic with one another. During our conference call interview, Hale and Wadlow finished each other’s sentences, made each other laugh every few minutes, and clearly had off the charts mutual admiration.

The following is a condensed and edited version of our delightful chat.

*This interview was originally published on February 14, 2020*

What draws both of you to the horror genre?

Lucy Hale:  That’s a good question and I still have a hard time answering it. I think it all starts with I’ve always loved watching them. My character has a great line in the movie that says, “That’s why we ride roller coasters and watch horror movies, because we like to feel something.” And I think that when watching horror movies, you’re so present. I love not knowing what’s going to come next. I’m definitely a thrill-seeker, so that’s why I love watching them. Making them, you know, I’m just grateful for any job. [laughs] But they are super fun to make. There’s so much that goes into any film, but what went on behind the scenes of making Fantasy Island was just insane. And that didn’t answer your question at all, so I’m going to turn it over to Jeff. [laughs]

Jeff Wadlow: Well, I’m drawn to the genre for the same reason I’m drawn to action movies. I’m very interested in the dialogue between the film and the audience and how we’re choosing to sequence images and sounds to create an experience for the audience, how we are creating tension and releasing it. And I love doing that with action movies, but I also love doing it with thrillers and horror movies. It’s a difference of scale, and you have to get much more focused and smaller with a thriller or a horror movie to create that intensity, but it’s still about that dialogue with the audience.

LH: What he said! 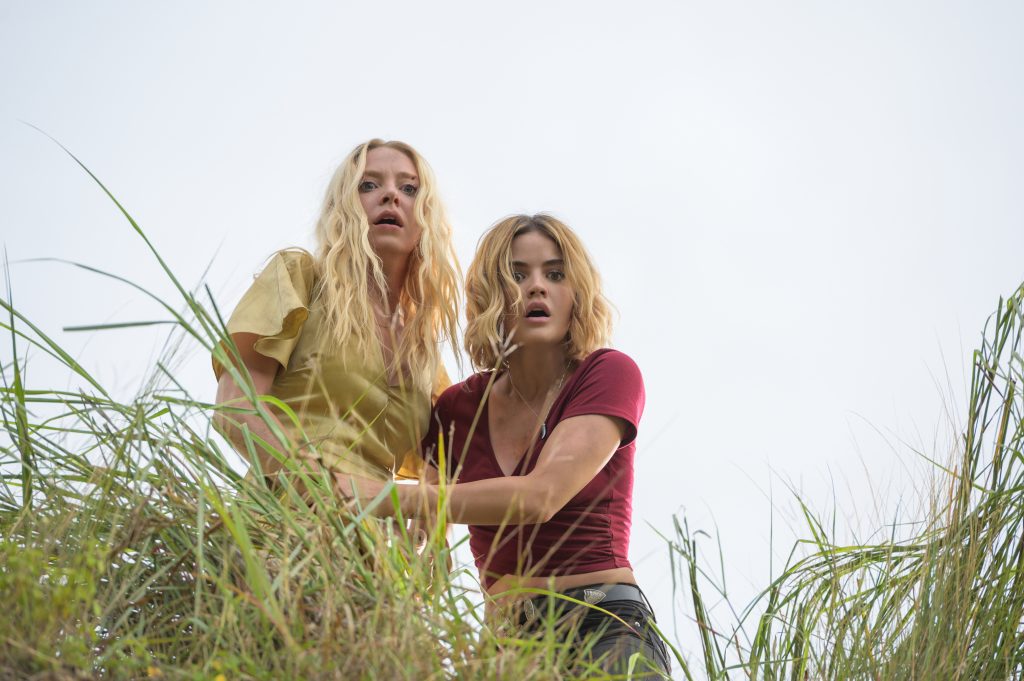 Lucy, what has your transition been like, going from television to film? Has that experience changed how you’ve approached your acting?

LH: That’s a good question. It hasn’t really changed how I prepare for a role. I think I approach it in the same way. Blumhouse movies are a lot like the TV I’ve done because we have little time to accomplish what we’re trying to do. TV is very fast-paced. I’ve been lucky enough to do two Blumhouse films and we’ve accomplished a lot in a little time. But I think that’s mainly the biggest difference for me. Most of my work has been in TV and mainly you get to live with the character a lot longer when you’re doing a television show, and it becomes a part of you in a way. That’s the biggest difference. For film, usually you get a lot more rehearsal time, which is nice. For Fantasy Island, we got the luxury of having one to two weeks of rehearsal, which for TV you never usually get.

This is your second time collaborating with one another, after Blumhouse’s Truth or Dare. What have you liked best about working with each other?


LH: I haven’t liked anything about working with Jeff!

LH: I say this every time in interviews: Jeff is the hardest working man in Hollywood. I’m just indebted to him because [to Jeff] you’ve given me not only one but two shots at taking on characters I’ve never played before. Not only does he direct, he produces and he writes. He wrote Truth or Dare and wrote Fantasy Island. [to Jeff] I mean you just write really great characters and understands the genre more than anybody.

JW: That is very kind. [to Lucy] I, in many ways, would say the same thing about you. Her work ethic is amazing. I like to work hard; I like to approach each day almost like it’s a professional sporting event and we’re out there to win, and Lucy is a superstar athlete. She is the Michael Jordan.

JW: I love that about her. I mean look, [to Lucy] that speaks to your craft and your professionalism, but I also think you’re just a brilliant artist. You have a real profound ability to connect with an audience. And obviously, from my earlier answer, I’m very into the dialogue with the audience, and you have this ability to elicit empathy from an audience in a way that is really unparalleled. 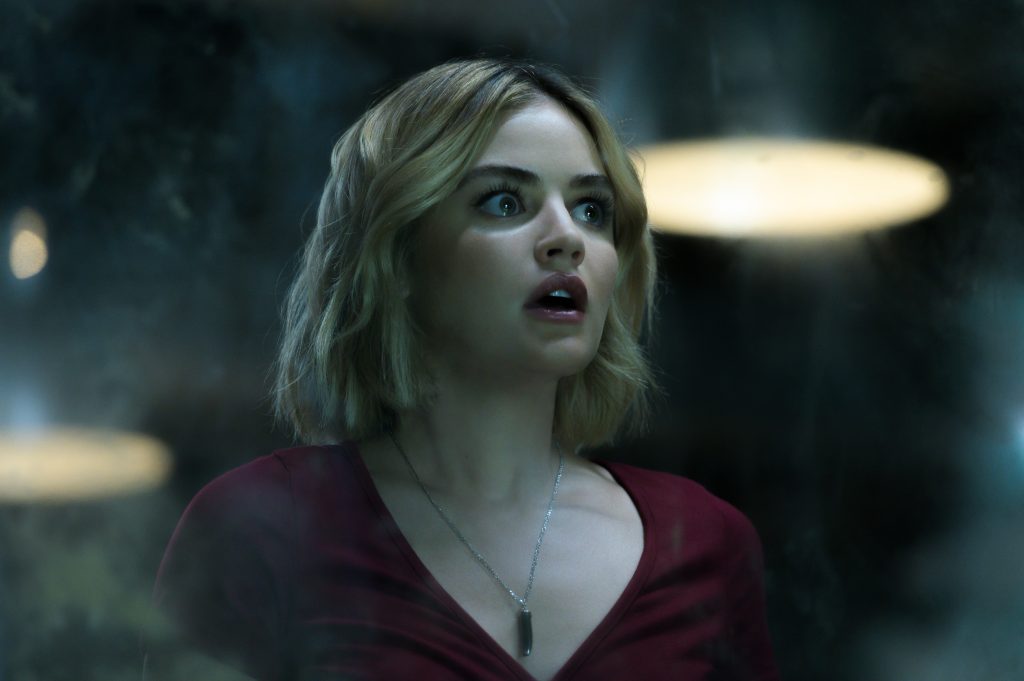 What are the ways that each of you challenge yourself? How do you find fresh elements to bring to this genre to keep your audience engaged?

LH: [to Jeff] I know you’re really eager to answer that. [laughs]

JW: I mean look, making a Blumhouse movie is just a continuous process of being challenged. There is never a moment when you aren’t being challenged in some capacity. What I try to do is look for surprises on set. I show up every day with a plan, so if everything goes to shit, there is a plan to rely on. But I still want to be surprised. My favourite moments in every movie I’ve worked on were the moments I did not plan.

LH: Yeah, the most unexpected things are surprising.

JW: Yeah, like I was saying when we were doing the commentary track, there’s a moment in Fantasy Island, and I won’t give too much away because it’s a bit of a spoiler, but there was a piece of coverage with Michael Peña, and the camera operator tilted down into this craaaazy close-up of Lucy, [to Lucy] it was so close to you, and you delivered your line and I don’t even know if you knew you were on camera…

JW: You delivered, and it was one of my favourite moments of all.

LH: Thank you. Umm, how do I keep it fresh? I mean, like Jeff said, [laughs] like with Truth or Dare, in this film we’re hustling the whole time and there’s so much to get done in little amount of time. Like Jeff said, it’s always fresh and new, and you just don’t know what’s going to happen—good or bad. With Fantasy Island in particular, we’re in a climate in a new place where most of us hadn’t been before. We hadn’t spent time there. We’re trying to dodge rainstorms, we’re hiking up mountains, there’s bugs and people are getting sick. We didn’t know what was going to happen. I think that element was enough to keep it fresh.

As far as from a character standpoint, Melanie is unlike any character I’ve played before. She’s very complex, very damaged, layered, and tormented. I loved stepping into her head; that was a challenge for me. Our moral compass is so different. Accepting the things she was doing and saying was the biggest challenge for me because never in a million years would I do the things that Melanie did. [laughs] My idea of revenge is very different. I like to take the high road. 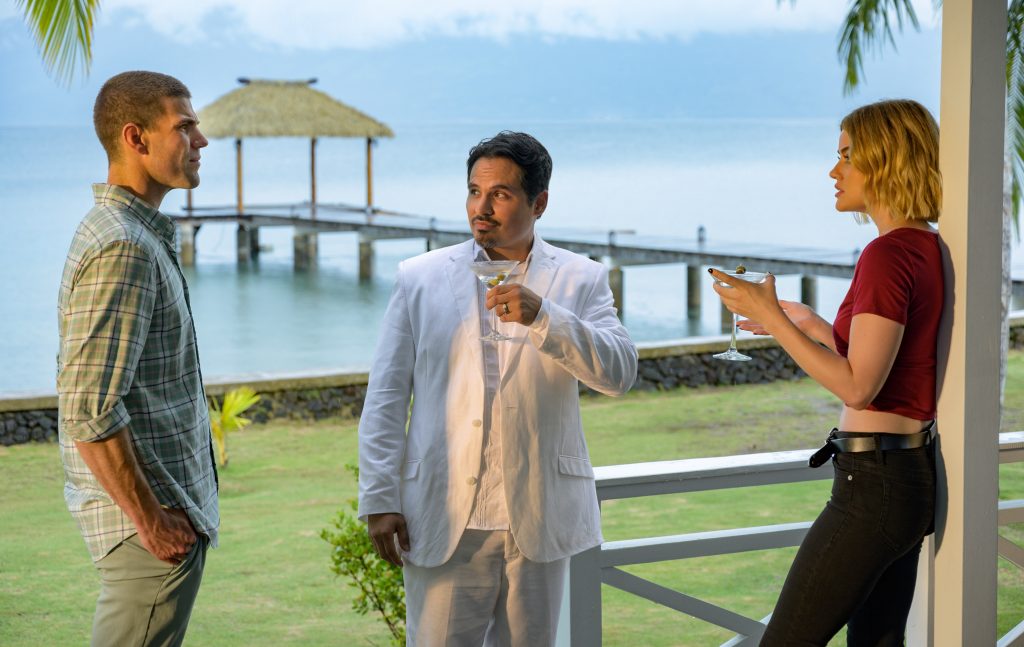 Lucy, a lot of the people that are going to watch this movie grew up watching you on Pretty Little Liars. Are you still finding yourself pulling things from Aria as a character, especially in horror films?

LH: Yeah. I feel like if they brought that show back, it should be made into a horror film, it has all the makings of one. There were so many suspense and thriller elements in that show that definitely prepared me for Truth or Dare and Fantasy Island. But the characters are all so different, and I never try to play the same thing twice. But that is a good question. I definitely think that being chased after someone for eight seasons on a show, being stalked, I definitely have my horror face down. It’s all in the eyes.

JW: If I could jump in…I know the question wasn’t for me…

JW: [to Lucy] One thing that you do very well is you understand the dance between the actor and the camera.

JW: It’s amazing to me, some actors will do incredible work, but they’re not presenting it in a way where the lens can find it. If there’s no connection between them and the lens, a lot of the performance gets lost. All that matters is what the camera perceives. I think having been on that show for so many years…

LH: …TV will definitely prepare you to hone your craft and help you to understand, not just your acting abilities, but how directors work and how producers work or writers.

[same time]  LH and JW: You connect with the camera.

Jeff, what do you look for in your actors for your projects?

JW: You know, like 5’2″, dark hair, big eyes. I look for actors who bring themselves to the role. I always say I cast the actor, not the character, so that in the script there’s sort of a sketch of a person, and I’m looking for a real person who’s going to bring something interesting that I could never have imagined to the part and really flesh it out and make it their own. Then I’ll start rewriting for them and thinking of new ways to express the character on screen through wardrobe, through dialogue, and through blocking. And a lot of that comes from the actor. What I love about Lucy is that she gets that. She becomes her own department head, so to speak. I think that’s really important that an actor takes ownership of the role. I don’t like actors who say “just tell me what to do”. I don’t want to tell you what to do! I want to tell you what I’m trying to do, and then I want you to play with me, I want you to dance with me. And there’s no better dancing partner than Lucy Hale.

Is there an overall message that you want to convey in this movie?

JW: Don’t live your life in regret. You have to move forward, and you can’t be consumed by the past because it will consume you.