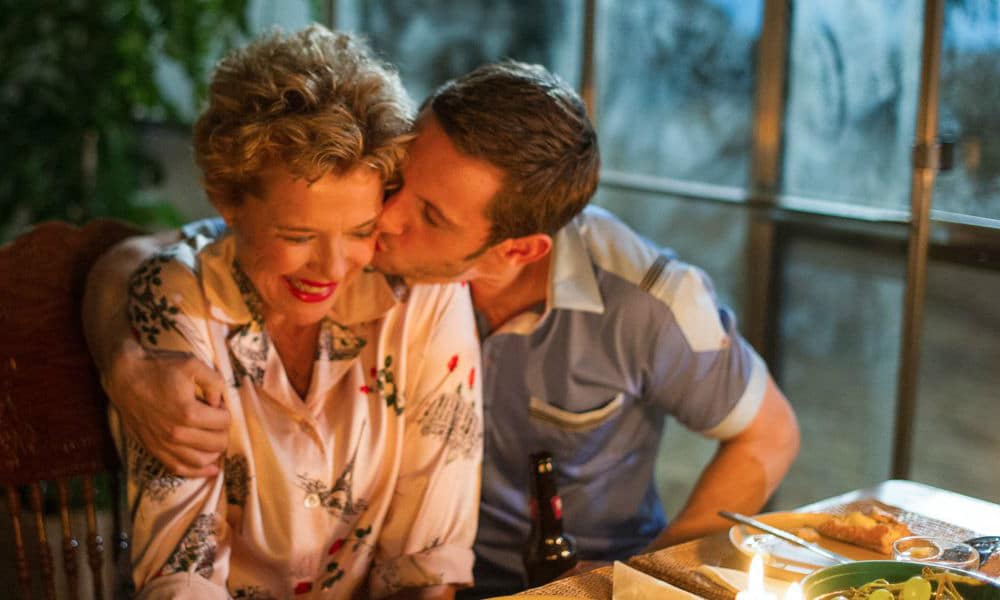 I was nervous about interviewing Annette Bening, to be honest. The four-time Academy Award nominee is revered in the film industry and is widely named one of the best actresses of our time. Yet when she glides into the ballroom in which our international roundtable is taking place during TIFF, she immediately is drawn to the food table and turns to a group of milling female journalists and asks if she can eat with them. It’s charming, relatable and I’m immediately put at ease by Ms. Bening. In Film Stars Don’t Die in Liverpool, she plays fading actress Gloria Grahame, a one-time Academy Award winner whose career nosedived soon after due to a series of unhappy marriages. Yet in her older age, while battling breast cancer, she had a passionate May-December romance with Peter Turner (on whose memoir the film is based) and yes, it was in Liverpool. UK actor Jamie Bell (TURN: Washington’s Spies, Billy Elliot) portrays Turner in the film and we had the esteemed opportunity to sit down with Annette Bening and Jamie Bell in a lively roundtable discussion.

The following is a condensed and edited version of our international roundtable interview.

Did you feel a responsibility in portraying a real person and a real love affair?

Annette Bening: I felt a responsibility with her because there’s not a lot that we know about Gloria, in truth. For whatever reason, you can go on YouTube and listen to all sorts of celebrity interviews from the past, and I do sometimes go down the rabbit hole and do that, but she you can’t find footage of her. Her life was famously tempestuous but how she was feeling about things, not a lot was known. This book, from Peter Turner’s point of view, he’s such a beautiful man. And when you meet him, you understand why she fell in love with him. He’s a lovely person and I got the feeling that a lot of relationships that she had were with people as difficult and tempestuous as she was. And she had a lot of sad relationships and custody battles and divorces and the whole thing. So I get the feeling that with Peter, there was a simplicity to their relationship. And the fact that there were all these other circumstances, like their age difference and the fact that she was a movie star and he was from Liverpool, these were all conditions and, in essence, it was like every other love affair.

Jamie Bell: When I was sent this material, my Manager said, “this is your chance to go to work with a great actor and a chance to really challenge yourself and stretch yourself”. And I said, “that’s a terrible idea! What are you talking about?!” *laughs* I was so nervous that I wouldn’t be able to match her level. I still feel, in some ways, so inexperienced as an actor. I thought it would be a little unfair for Annette. But in working with Annette, especially on this kind of movie, a love story, it was super important, for me at least, to establish a good sense of trust in each other as performers. The journey that we had to go on and the intimate moments in the film, it really felt that the trust happened very quickly. It was very unspoken. I always felt like we would have each other’s backs. If we disagreed on something in a scene or if we wanted something different, we’d back each other up, and I think that really helped with the storytelling and the trajectory of the relationship. Also, during scenes I got to sit back and watch her.

The chemistry came across as very natural on screen.

JB: I’m very enamoured with Annette, period. *laughs* On a professional level. *laughs* She’s also so much fun to be around and we share a similar sense of humour, which Paul would get mad at sometimes.

AB: That’s right! I forgot about that.

Gloria was very concerned with her physical appearance. Did you relate to and understand that vulnerability and pressure?

AB: I think I have vanity but I think we all do. I think it’s pretty normal. I’m also very interested in being an actress my entire life and what’s interesting is to be the age that you are, in terms of who you’re playing. For me, trying to find that authentic experience is interesting. So that’s the direction that I’m going, but everybody does it differently. I just worked with Vanessa Redgrave and that was fascinating. But everybody has vanity. There was tremendous pressure on women then, as there is now.