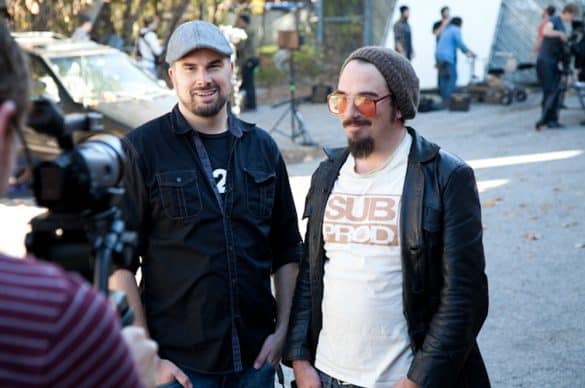 The Butler Brothers, Jason and Brett, are real old school guys, which makes sense as they tell us their major influences are the seventies and the nineties (interestingly, they skip the eighties). This goes to show in the type of films that they make, (of which their latest, First Round Down, feels like a real throwback). This influence is apparent in the way that they walk, in the way that they look, and especially in the sound of their films. The soundtrack to First Round Down, a hockey / gangster film, is like a crash course in mid-nineties Canadiana (Sloan, Junkhouse, hell, even The Gandharvas make an appearance). This desire to make the best film comes from their experience playing hockey, appropriately enough. We spoke to the pair at a downtown bar for an exclusive chat and the following were the highlights.

Brief Take: What does it feel like to plan for a movie with your brother?

Jason G. Butler: There’s just a shorthand between us and it happens naturally. We don’t really need to talk about it, and as it just starts happening.

Brett M. Butler: Intense preparation too, because we can just work around the clock. We worked with our director of photography on First Round Down, Michael Jari Davidson, for six months, meticulously planning stuff out. When you’re working with family, you don’t want to let them down. We’re cinephiles at heart, both having worked many years at a video store, and we’re passionate about films in general, from a young age.

BT: How does it feel when you sell out the screenings repeatedly?

BB: It’s nice having a run in Eastern Canada and Western Canada to get people in the city kind of…salivating. It’s nice watching the film mature. As filmmakers it is kind of nice to have the homecoming.

JB: We even saw some of our hardcore Toronto fans show up for the Hamilton screening, which is great. You just see people and you’re like, “I haven’t seen you in forever”. A lot of people have been coming out and supporting us since the beginning. Knowing that we’re still doing stuff in which they are interested, and that we’re moving forward and challenging ourselves and they’re right there with us, is really powerful.

BT: What was it like to have the Hamilton Steelhawks, an actual team, be part of the action?

BB: It was great to get the Hamilton Steelhawks on board. We shot the fight scene during the intermission of a game and had Dylan Bruce there on the bench, it was a pretty wild scene.

BT: How was Dylan Bruce as a hockey player? Could he play?

JB: He’s an actor, he sold us! So of course when were talking about him, he had a background in hockey, he told us that he could skate. We were feeling pretty good about it, when it came time to film, we could get by, but we had to do some fancy camerawork to sell the sizzle. He played lacrosse at university and he had the moves and knew what was going on, but skating is really hard. Dylan had all the mannerisms and style.

BB: He was chirping at the other team for ten minutes even when the camera wasn’t on him.

BT: What kind of atmosphere are you expecting? How has the response been so far?

BB: Maybe we’ll set up a hockey fight outside.

BB: We want people to come back to it again. When we made First Round Down, it was the kind of movie we wanted people to watch over and over and over. It was these kinds of movies that influenced us, still, to this day.

First Round Down will be opening at the Imagine Carlton in Toronto on May 5th.