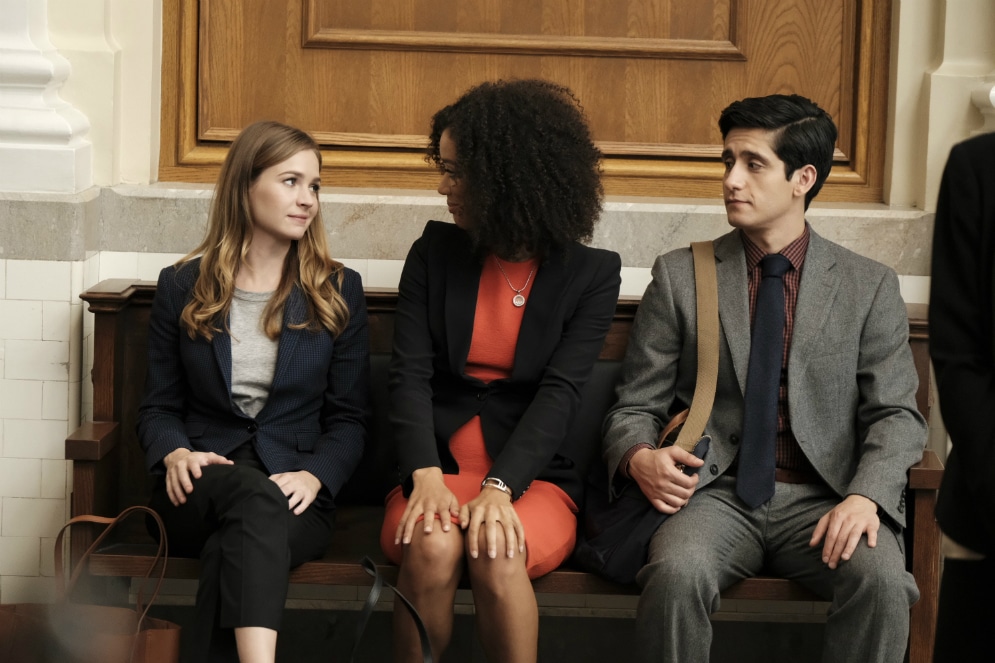 Adding to her already impressive lineup of tv shows (including Grey’s Anatomy, How to get away with Murder, the soon-to-be-completed Scandal and Station 19), Shonda Rhimes is now executive producing For the People. Centering around a group of young upstart lawyers beginning their careers in the respective offices of the New York defence attorney and prosecution, the show boasts a superb (not to mention diverse) ensemble cast led by Hope Davis (The Newsroom), Britt Robertson (Tomorrowland) and The Leftovers alum Jasmin Savoy Brown.

The day after the series premiere aired, I was delighted to sit down for some one on one time with rising star Ms. Brown (who showed up wearing a very apt power suit). The following is a condensed and edited version of our talk.

Brief Take: Congratulations on the show! Judging by the response on social media and just from talking to people I know, For the People is already a smash hit! How did you first become involved with the project and did you know any of the ensemble before you shot the first episode?

Jasmin Savoy Brown: I knew of a few of the actors but, funnily enough, I had seen Susannah Flood, who plays Kate, in a Broadway production of The Cherry Orchard a year prior. She was amazing! She stood out. In terms of how I became attached, I auditioned like everybody else, and I was lucky enough to get the job.

BT: I appreciate that the show portrays both the public defenders’ and prosecutors’ side of every court case and, more than that, it encapsulates different sides of humanity. Unlike other shows about the law or lawyers, it has a very refreshingly optimistic portrayal of people. What drew you to the script initially?

JSB: When I first read the script, I loved Sandra and Allison’s friendship. I loved that they were supportive of each other and there was no gossiping or backstabbing and it wasn’t catty at all. It was truly two women who support and love each other going through life together, which is my experience with my best friends. Some of the scenes through the season, actually, I swear that they had a camera in my old apartment with me and my best friend and my roommate, because they get it right, which does not usually seem to be the case on a lot of tv shows.

BT: I also love how they’re very driven but they’re driven towards and love their work, and their number one motivation isn’t getting a guy.

BT: That must have been so refreshing to read in a script for a mainstream tv show.

BT: Working on a Shondaland show is, I can imagine, very empowering as well. While the rest of the world is buzzing about inclusion riders, I feel that Shonda is way ahead of all of that, as evidenced in Ellen Pompeo’s recent article in The Hollywood Reporter recently. What has your experience been like working on a show that’s executive produced by Shonda Rhimes?

JSB: It is definitely empowering and there’s this comfort in knowing that if I bring something to the table, I’ll be taken seriously. I won’t be written off as a dramatic woman or someone desperate for attention, or whatever they can come up with. I will be taken seriously and encouraged to use my voice. In fact I am taken seriously and encouraged to have input and be a part of the process. Just knowing that, allows me to feel well taken care of and therefore do better work, because I’m not worrying about the b.s. of the politics of the set. I know that the people around me on set trust me and love me and I can just show up and do my best. When myself and the cast and crew show up to work, it’s always a very warm and inviting environment. Even though it’s a very stressful thing to do, to make a television show, it’s the least stressful it’s ever been for me, when compared to the other shows I’ve worked on. It’s such a relaxed, good vibe on set and I really love going to work every day.

BT: You mentioned earlier that of all the Shondaland actors, you’d want to have Viola Davis guest star on the show. Now if you could have any actor in the world to guest star, who would you choose?

JSB: Ooh, in the whole world? Still Viola Davis. *giggles* I love her!

BT: Do you watch the other Shonda shows? Because you were in an episode of Grey’s Anatomy just a few months ago.

JSB: Oh, I don’t watch consistently. When I can, yes. I actually just started watching Grey’s from the beginning because I’d seen episodes here and there over the years, but I’d never tracked the whole storyline. So I just started that and it’s a lot of fun because it’s a lot like our show, at least in the beginning. Young professionals starting out. It’s really endearing.

BT: You and the other cast members seem to be very close off-camera. If you could have any one of them defend you in a court of law, who would you choose?

BT: And who do you think would make the best prosecutor?

JSB: Definitely Susannah, slash Kate. Susannah is a lot like her character Kate. She takes her work very seriously and is very professional and she probably knows more about law than the rest of us combined, just from her research and her ability to retain information. So without a doubt, Susannah.

BT: Without revealing too much, what’s coming up for your character? Is there going to be some drama with Seth [played by Ben Rappaport]? I feel like he didn’t walk away at the end of the episode without there being some dire consequences for your character coming up.