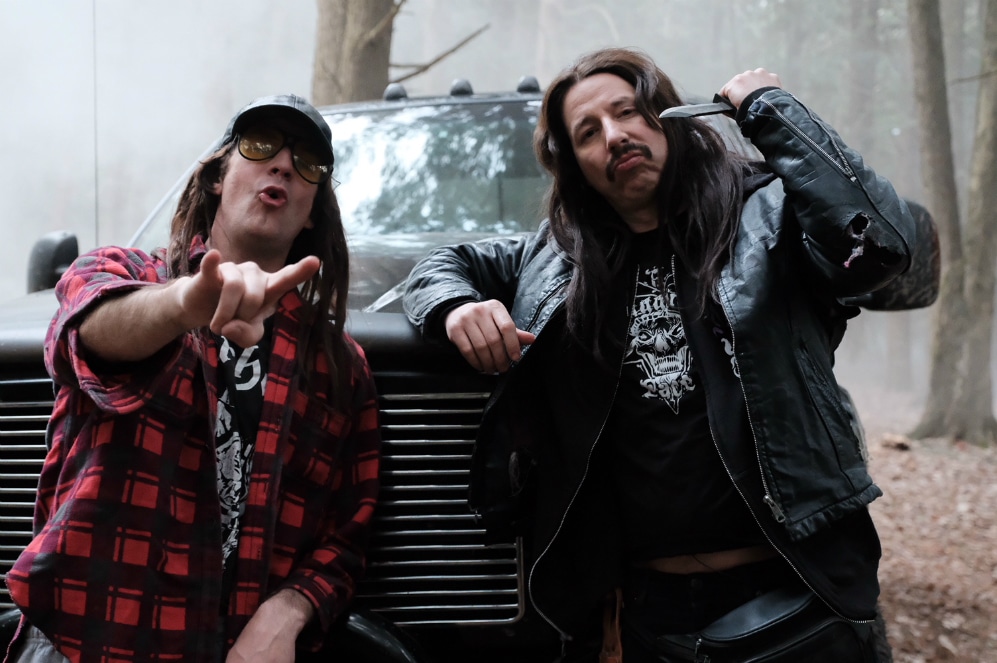 It was a great pleasure to sit down in the gorgeous VICELAND offices with director Michael Dowse. He warned us not to shake his hand because he was coming down with something but he was certainly generous with his time and his answers. He is the director of Fubar: Age of Computer which is a hilarious new show on VICELAND and airs prior to Nirvanna The Band The Show, which despite being very different entities, have a similar feel.

Here is an edited version of our conversation.

Brief Take: Do you feel like a lot of time has passed with these characters?

Michael Dowse: No, time has passed, for sure. We don’t adhere strictly to “it’s been seven years”. It sort of floats in a three to four year period since FUBAR 2. It’s fun to pick up the characters again and we don’t bang out a lot of sequels. It felt time to get back into it and give it a shot and, especially in this concept, to bring in a bit more of the technology and juxtapose them against that.

BT: Kind of a funny idea that they discover the internet all at once.

MD: Yeah, for sure, the idea that we had is that we were going to do an animated version of the show. Not of this concept though, with VICE and then it became clear that we didn’t have the resources to do animation properly. The concept of this show was borne out of Terry in front of the computer. I loved the idea because it was so simple, but I also thought it gave the show a real sense of scope and variety. And the idea of having multiple layers and shooting with many camera angles, it just felt like the right step within the parameters. Plus shooting something for VICE, it just felt like the right thing to do.

BT: This was probably different than the plan the first time.

MD: The first time? Our plan was literally to take 300  VHS tapes and leave them on desks and see if it would pick up. Sort of like a Heavy Metal Parking Lot. But we got picked up by a distributor and went to Sundance so obviously it went a little differently. We were lucky with the first one. It cost about $20,00 to $30,000 to shoot and edit. It’s exciting because the first and second films were very different in style, so it was fun to go back and do something with a lower budget. I camera operated on all of the films, but it really didn’t give us a choice, we had to be down and dirty and you can’t be too expansive. It’s sort of more in in line with the first film.

BT: So it’s like giving yourself an extra challenge?

MD: Yeah, you kind of have to use what you have, and there’s a freshness and a rawness to the footage, which is great. We have treatments, but no dialogue at all is ever written. Most of this is shot on a stage. We found an old manufacturing warehouse on the sixth floor of an industrial business in Montreal and built this basement set. But we almost wanted the set to be like a character in and of itself, like it would expand and like we would knock down walls and discover new rooms and storage rooms and walls. We also made the set deeper as we move on. That’s the beauty of working with the Internet idea, which is that the set expands, without leaving the comfort of your own home.

BT: Do people relate to the characters?

MD: I think a lot of people have had experience with headbangers, or were in fear of them, or were them, or dated them. I think there’s an affinity for their actions and their attitude, where they’re just like “whatever”, you know. I think first and foremost, the comedy speaks to people and the irrevernace and the tangential lines, and I think that this comes from the improv and the editing.

BT: In terms of a slightly different television experience, what can you say about working on Preacher?

MD: That’s a totally different gig as a director in which I am not necessarily the guy in charge, but I am in charge of the set. But you collaborate with the writers and the show runners and the actors have been there longer than you, so you’re really the only moving part. So it’s a much different experience, but in the same breath, it’s a lot of fun because there’s a lot more resources.

BT: It was up in the air last we heard about renewal for season 3.

MD: Don’t worry about it. The episode I did was a blast. It was really fun to do. It was a Zero Dark Thirty siege episode. It’s so much fun to go in there and work with that calibre of actor like Dom [Cooper], Ruth [Negga] and Joe [Gilgun]. They are incredible. Seth [Rogen] and Evan [Goldberg] are great producers and Sam [Catlin], and the guy that wrote it, Seth Rosenberg, is really talented. I read it and I was like, “well, this is just perfect”, and it’s fun because they encourage me to swing for the fence many times. They are very director friendly and wanted me to have an opinion on what the scene should look like and making it unique. It’s literally crazy. I thought my episode [Puzzle Piece] was crazy, but the episode after mine [the Humperdoo episode entitled Dirty Little Secret]  was even crazier. But the show is great. That’s the trend with episodic television, there’s the market and the money to take chances creatively, maybe more so than with studio filmmaking. In Canada, writing with the room is being embraced and money needs to be spent on writing by committee and not by one writer.

Fubar: Age of Computer plays Fridays at 10 pm on VICELAND.