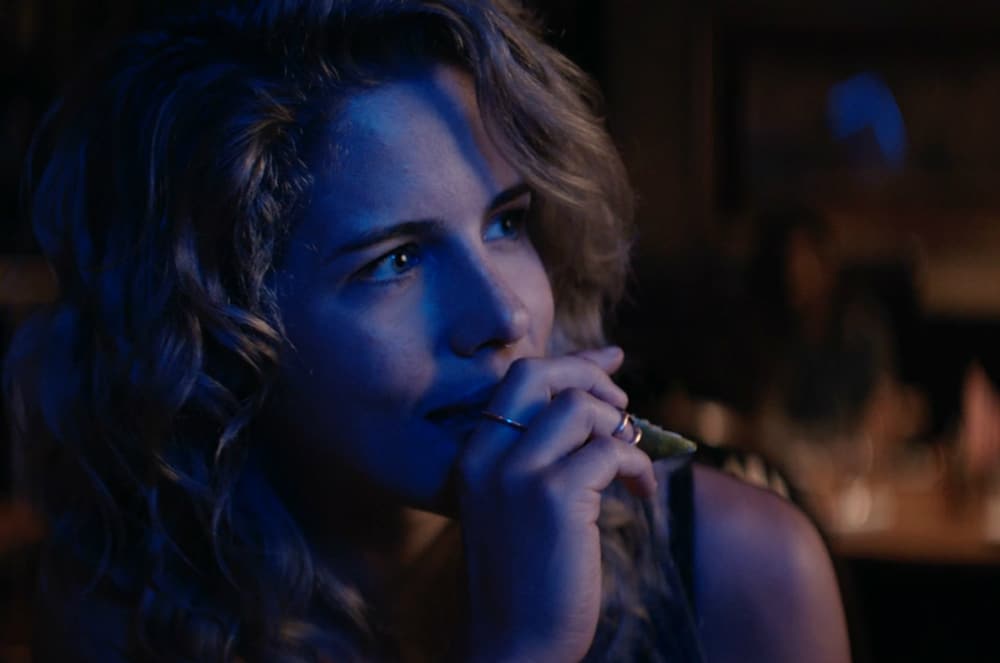 While many fans may know Vancouver’s Emily Bett Rickards as Felicity Smoak on Arrow (and The Flash and Legends of Tomorrow and a certain episode of Supergirl), Rickards is an extremely versatile actress and knocks it out of the park with the dark comedy (very dark, as in night dark) Funny Story, which debuted at Slamdance in 2018. Now that the film is playing in select theatres and On Demand, we highly recommend that you look out for the film because we see a completely different side of Rickards as Kim, a character experiencing a loss who runs into Matthew Glave’s Walter, an aging, womanizing Kevin Sorbo-type and then, well, it’s a Funny Story.

Here is a condensed and edited version of our phone interview with the talented actress.

*This interview piece was originally published in January 2018*

Brief Take: So Funny Story has a lot of unanswered questions.

Emily Bett Rickards: There’s a lot of questions of whether or not these characters find their way, and I think people are looking for the answer and honestly, I don’t have one. *laughs*

BT: I mean, that’s life, right? Sometimes we don’t have the answers.

EBR: That’s all of life.

BT: But it is a great role, and I bet you had a great time making the film.

EBR: Yeah, it was pretty fun. I mean, the character was quite disturbed and tangled and knotted up inside. I guess I wouldn’t use the word enjoyable. *laughs* I mean, I had fun, she’s quite gucky inside, she doesn’t know where she’s going.

BT: It gave you the chance to branch out a little, though?

BT: This is a dark comedy, but a comedy nonetheless.

EBR: Yeah, when we started playing it and realizing that it was funny, but not like “funny haha”, it was more like “hey, I have a story for you”, and you kind of think to yourself, “oh, what circumstances sort of made that happen?”. It’s one of those things in our lives, where we sort of think about it, and yet it’s not funny when we’re in it. A lot of missteps and no slipping on banana peels funny, but more kind of walking into the wrong door funny. It’s all about discovery for me, and all about story, and it’s like what kind of stories can we tell, and hopefully I get the opportunity to play more.

BT: How was your first Slamdance?

EBR: It was great to see everyone again because at the end of the shoot, I went right back into shooting Arrow. That was really something and Park City is quite beautiful, but it’s *packed* with people. There’s a lot of people everywhere you go, which is to be expected but everyone’s there to experience new film and supporting independent film, which we can only hope can get greater in the future. It was super fun.

BT: But Park City, as opposed to a big city, this is about as big as it gets.

EBR: I know, I think about too, because they must have the ski season. I mean, I didn’t get to go up the mountain, but it looks amazing. I’ve love to go back and just ski the mountain up there.

BT: I know you were hoping to run into your friends. Did you?

EBR: I did! I ran into Janina Gavinkar [at Sundance for Blindspotting], she’s been on Arrow before, and I saw Tom Felton briefly [there for Ophelia], but I did run over and yell at him, “Yo!” *laughs*

BT: Were you excited to see your former Brooklyn co-star Saoirse Ronan nominated for Lady Bird this morning?

EBR: I’m excited to see how it goes. She’s a phenomenal actress and I look up to her a lot. Brooklyn was a beautiful, beautiful film, wonderfully done, good story, and I’m proud of her.

BT: It’s all about chasing the story, finding good roles, and maybe getting to sing a little bit, too?

EBR: It’s funny you mention that, I was just thinking about that today! I have a friend who’s coming out with a new album, we were chatting, hopefully do some vocal work and get the rustiness out of it. It’s a fun way to be able to express myself, and something I miss deeply, so…hopefully, yeah!

EBR: I was listening to Miguel’s new album actually [War & Leisure] on the weekend and SZA, her album, Ctrl.

BT: Miguel’s been acting a little lately, too, with Detroit and Live By Night…