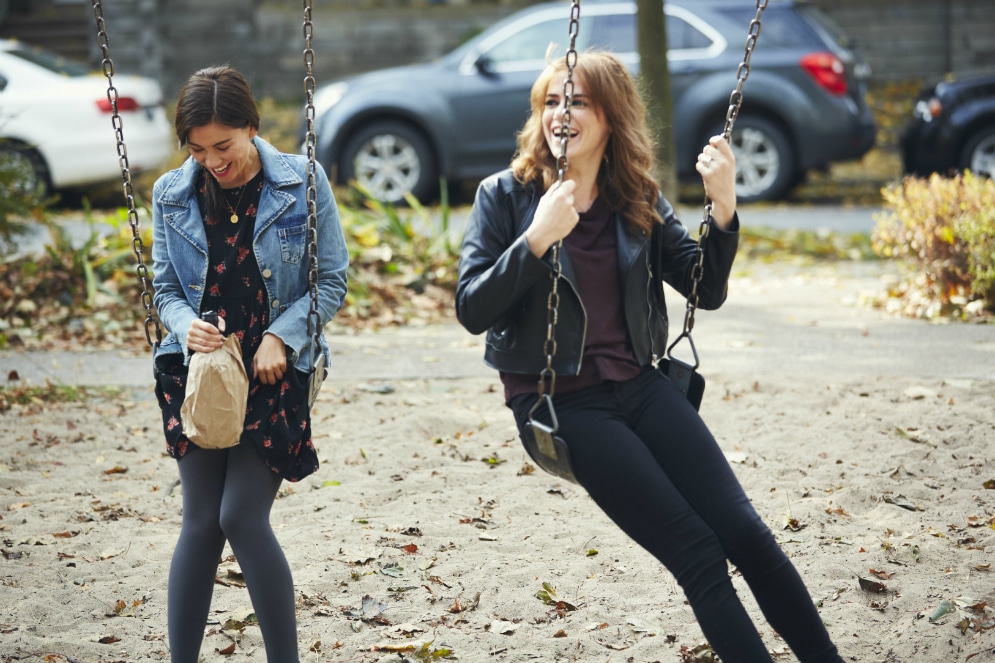 We had the pleasure of sitting down with the creator and star of the comedy web series Ghost BFF, Vanessa Matsui, along with star Tiio Horn, who just arrived from Los Angeles. They were in Toronto at the TIFF Bell Lightbox in advance of the premiere of the first six episodes of the show about depression (it is incredibly funny, trust us). We talked to the pair in advance of that night’s screening and panel, moderated by Clara Altimas of Same Page Productions. The series is set to debut March 1st on Elizabeth Banks’ platform WhoHaHa.

Brief Take: How do you think that your show will be consumed?

Vanessa Matsui: I’m a new mom, so I appreciate short format. I think there’s a cut, where the series moves to a different point, so I think that people are going to go 1-6, and then 6-11, so that’s what I think.

BT: Where can we find Ghost BFF?

VM: We’ve been picked up by Elizabeth Banks’ company called WhoHaHa. It’s going to be DailyMotion that it streams on but through their platform. Apparently, it has a really big following, and we took a lot of meetings to find a proper home for this. I put so much heart in it, and once I met with them, this was the home and female-driven.

TH: It’s cool now that you see these platforms where a web series can have a life. It’s not just uploading to YouTube and…

VM: Hope for the best.

TH: We’ve seen the evolution in our lifetime. I remember working on film, like on the RED Epix-X cam.

Brief Take: One of the most interesting things about the show is that, in spite of its dark subject matter, it’s really funny.

TH: When I first heard about the project a long time ago, I was like, “Okay, a comedy but like about suicide? Okay, okay!” *laughs*

TH: I was like, “she’ll do it, she’ll pull it off”. But I feel like that serious subject matter grounds the show and roots it in something real, instead of “oh, these twenty-somethings, like *my life*”…

BT: I laughed a lot.

VM: Oh good! I’m always worried people aren’t going to laugh. With the way the show opens, the audience needs to give themselves permission to laugh.

VM: I had to bring that in sort of quickly so that they knew…if it seems pretty dark…*laughs*

TH: I think it’s really sweet that you did the whole “Bring your BFF” thing.

VM: I’m really lucky that I have a pretty incredible group of female friends, and that’s kind of an inspiration for the series. Your friends are so important, especially as you get older.

BT: It’s like you will your Ghost BFF back into existence.

VM: That was a question, early on in the writing process, “is the ghost real?” I don’t know, is she?” *motioning to Tiio* I think we decided that you are real.

BT: You were friends, right?

TH: For over ten years.

VM: We know each other from our Montreal days. We got to be…I was actually on your show once, and I got to play your friend, I was on 18 to Life.

VM: I feel like it’s the only time we’ve worked together, so I’m glad that I finally got to work with Tiio.

BT: Daniel Beirne is fantastic as well on Ghost BFF.

VM: Also, Dan is our access point to the main audience. We thought at first it would be a very female-centric show. Then I started testing it with some of my *laughs* laypeople friends. A lot of guys are like, “oh, that guy”, they really related to him. He’s so funny and talented and does it really well.

TH: He’s one of those people where you look at him and are laughing.

BT: Who is someone you’ve worked with constantly that you trust and like?

TH: If I had a dollar for every time someone was like, “Do you know what? You should just hire my friend or my cousin”. I’m like, “that’s what the whole show is about!”

BT: Vanessa, do you get recognized for Shadowhunters?

VM: Yeah, that’s probably the thing I get recognized for the most.

VM: It’s like Buffy the Vampire Slayer is the closest comparison. A girl on her eighteenth birthday discovers she has powers and kicks ass.