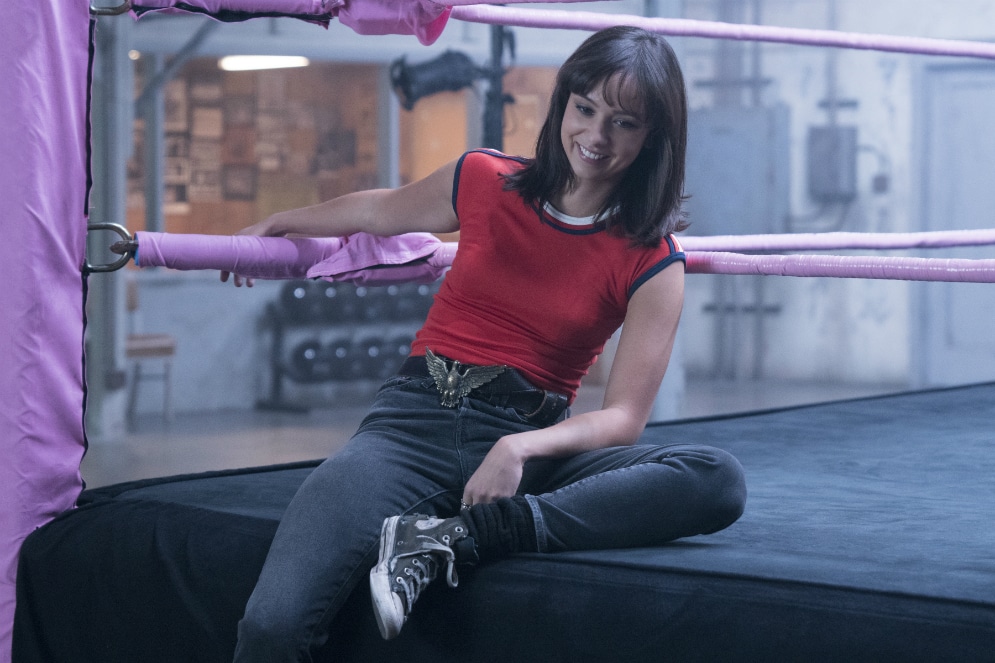 Britt Baron was an integral part of GLOW season one, toting around a secret that came as a shock to many viewers and, as it turns out from our interview, much of the cast as well. But if you think that season one was the be all and end all for Baron’s character Justine Biagi, you ain’t seen anything yet. Season two of GLOW brings a huge surprise in the form of…well, you’ll have to watch to find out. In the meantime, here is a condensed and edited version of our interview with the wonderfully delightful Britt Baron.

Brief Take: I read that your character’s backstory was a secret at first.

Britt Baron: Liz Flahive and Carly Mensch, our show runners, told me in my meeting and they also told me “we’re not telling any of the cast, we’re not telling Marc [Maron], you are the only one who can know”. And I didn’t know how it was going to come out, so every episode’s script that I would get, I would kind of like skim it. I didn’t know if it was going to happen in episode 4, or the end of the season, or how it was going to happen. So I remember when I finally read episode 9, I thought “Oh my God, how brilliant, that he goes to kiss her, you know, how typical, ugh, that she’s coming on to him”, I just thought it was brilliant. But it was also a nice way for me to go through filming, because my experience as Britt was kind of paralleling Justine’s – I was with all these new girls in the cast to whom I was getting close, but I had this secret from them. Like, none of them knew, I felt a little bit like an imposter the same way that Justine did, so it was actually smart of Carly and Liz to keep it under wraps, and I think that I loved the way that it went down. [laughs] 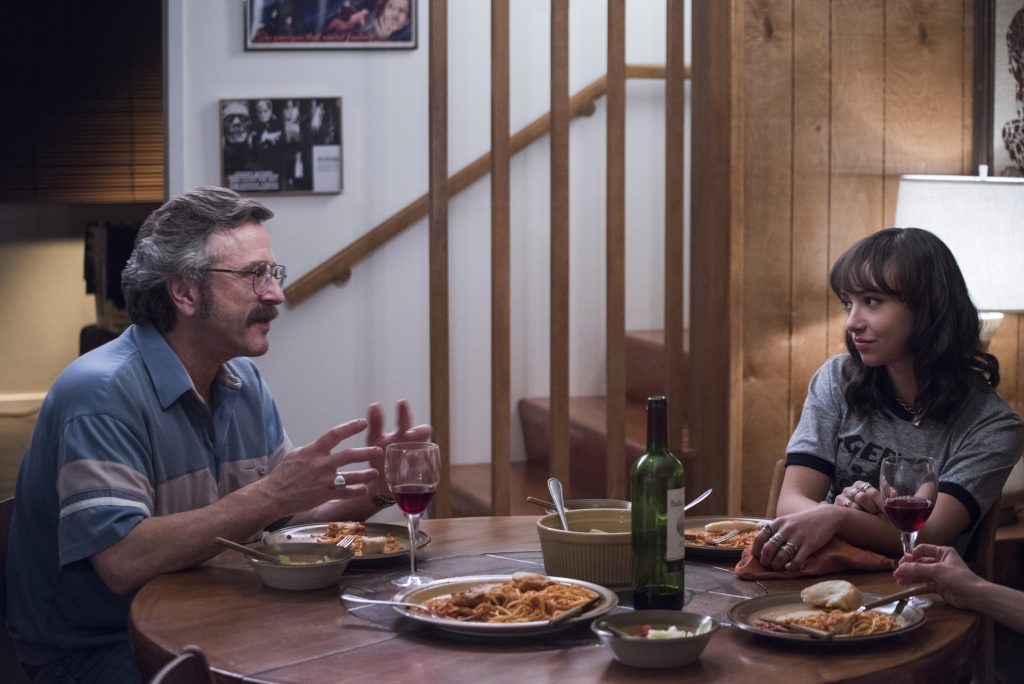 It’s very clear that she’s a kid. Her motivation helped me, otherwise it’s a little strange, why is this punk rock teenager here? Justine is not the kind of character that is dying for attention by any means, she’s not trying to be on TV, she has no interest in really wrestling at all. I say in season 1 or season 2, “I’m not here to be a wrestler. I don’t care about any of this”, so knowing why she was there helped motivate my character and made it easier as an actor, not to be grasping at straws, or “why would she be here?”.  I think in a lot of season 1, the character is just trying to get to know her Dad, and I don’t think it’s on the tip of her tongue. She’s trying to keep her identity close to her chest because it’s her way of getting to know him, Sam Sylvia, he’s not like the warmest, fuzzy guy. I think that if she had come right out and said “hey, I’m your daughter” the first time she meets him, it obviously wouldn’t have gone well, so I think she was biding her time but she’s also gone sixteen years without a father at all. 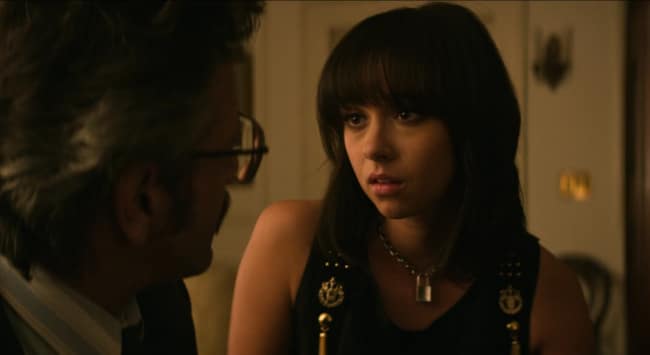 BT: This dovetails nicely into season 2, in which your character’s motivation is revealed, that her future is behind the camera, which parallels the number of female writers and directors that you have on your show.

BB: Yes! That’s one of my favourite parts about Justine – she’s known and idolized her father, and her connection to her father has been through film, she knew that he loved film, that he was a filmmaker, she’d seen all of his work, so to see season 2, where she gets to bond with him in a way, through behind the camera work is exciting. I think that it’s really nice to see the daughter and the father bonding, at them kind of creating a relationship in a way through film, and it does parallel our real show because we have almost entirely all female producers, except for Mark A. Burley. I think that Liz and Carly have made a conscious effort to have some representation not in front of the camera, but behind the camera, with almost all female writers, and that’s one thing that I think is so important in the industry. As wonderful as it is to see more parts for diverse actresses, I think it’s just as much if not more important to see more females in writers rooms, because that’s where shows are, you know, the words and the stories are…that’s the meat. Actors can only do so much, so I am very proud to be a part of this show, with females both behind and in front of the camera. And it’s cool that Justine gets to be that too! I really enjoyed that.

I think that the reason the show is what it is, is because they’re writing their own experiences. I’ve heard multiple stories of “oh, this storyline, such and such writer went through something similar”, and I think that the more we can include a diverse writers room for all shows, the stories are more accurate, they are smarter in a way. It’s not someone’s idea of what an experience is like, it’s people who have lived that experience. I don’t know if GLOW would have worked without strong female writers because it’s a lot about being a female and the struggle that we go through and the expectations. In season 2 you get to see more of Debbie’s experience being a mother and going through a divorce and also trying to have a career, and it’s what so many women go through. I don’t think it would be the same with men writing what they think it would be like to be a woman. [laughs]

BT: What I love about the show is that it looks at the ’80s through a contemporary lens.

BB: I think that sometimes it’s slightly depressing that you’re like “it was set in the eighties and was inspired by the original GLOW and how many of these things can be a reflection of today’s world”. You feel like you come so far, and yet not at all. I love that part of GLOW, that we’re able to be in such a wonderful position to be able to comment on things that are happening right now in the present but through the lens of the eighties so perhaps the audience is able to watch it with less reservation than they would if it was a present day show. I think that our country is so divided right now, so to be able to watch a show through the lens of “oh, this is the eighties, it’s not today”, I think it gives us a slight advantage to appeal to all sides, because it’s a little disarming to able to comment on things from today through our sort of lens.

BT: Do you binge watch?

BB: Well I have no self-control personally. [giggles] I binge shows or stay up until four in the morning, where you’re like “I really need to turn this off”. [laughs] I love that GLOW, with ten half hour episodes, most of the people I know somehow managed to watch in a week or a weekend.

I’m a huge Westworld fan but every week I’m like, “Wait, what’s going on? where did we leave off again?”. I think it’s nice that GLOW, with its shorter episodes, you can watch them consecutively or near to one another. That’s how I prefer to watch it.

BT: Can you talk a little about your fascinating charity work?

BB: I’m part of the American Foundation for Suicide Prevention. We’re doing a walk in Santa Monica in October, for anyone who is in the Los Angeles area, we’re planning it right now. It’s an incredible foundation and it’s been brought to the forefront more now that all of the celebrities have unfortunately been taking their own lives within just this past week. I lost my cousin in March of last year and I needed to do something immediately because I felt so strongly that mental health is still so taboo and that’s kind of what perpetuates the problem, not talking about mental health only isolates people more. I think it’s an incredible organization for anyone that needs help, they identify signs to look for, they have great resources and it’s really inspiring. You realize how many people who have been touched tragically by suicide, there’s no reason to stigmatize it. So many people suffer, and the more that we are open and honest about that, the less people can suffer alone and encouraged to reach out and ask for help.