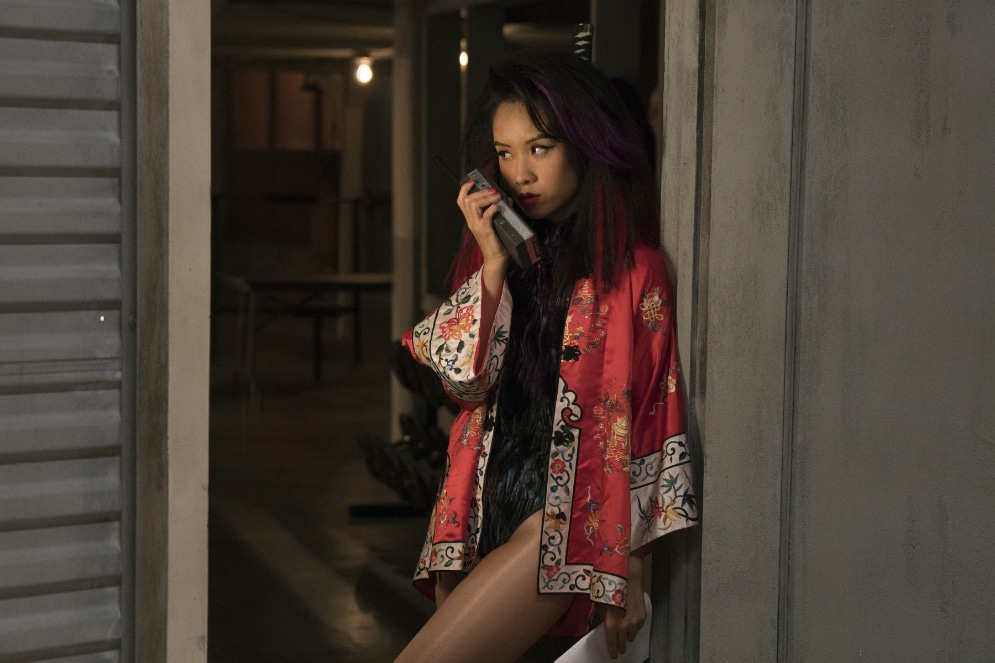 Ellen Wong first came to our attention in the film Scott Pilgrim vs. the World because her Knives Chau is the unqualified highlight of the film. Quite frankly, when it came down to it, we would have chosen her Knives over Mary Elizabeth Winstead’s Ramona in a frickin’ heartbeat. In fact, we’re enamoured of all of her projects, including Dark Matter, and in the female-driven GLOW, Wong delivers a standout performance. She was also recently chosen as one of Hello! Magazine’s 50 most beautiful Canadians and, after chatting with her in an intimate interview in downtown Toronto, we can heartily agree that the Canadian is beautiful inside and out. Here is an edited and condensed version of our conversation with the energetic Ellen Wong.

Ellen Wong: Thank you! There’s always something new to discover in that film because Edgar [Wright] put so many details in it and there are so many layers, and you just don’t realize it sometimes. You watch the film and go, “that was in there the whole time?” and yeah, the detail is incredible. I always call it “the love letter to Toronto”.

BT: Now let’s talk about GLOW. I loved season 2 – I binge-watched it all very quickly – but to avoid spoilers, let’s talk about season 1. I will say that your one super fun episode in season 2 was really funny and I can’t wait to watch it again.

EW: [laughs] Oooh, I think I know what you’re talking about. [winks]

BT: No spoilers for my readers though, so let’s talk about season 1. Your narrative on the show paralleled your real life story because you were getting to know the ladies of GLOW both on and off screen. How was that experience for you?

EW: Yes, and we’ve been talking a lot about that, amongst the cast members; we call it a “glow-men”. Something will happen to one of us on set or in real life, and all of a sudden, it’ll happen in the show. We’ll say to each other, [quietly] “are our trailers tapped? do they have a spy on us listening in on our conversations?”. But the writers assured us that they’re not doing that to us, so we’ve decided it’s a glow-men. [laughs] It’s definitely very meta.

BT: I was told that the cast are on a group text so…

EW: Yes! Maybe that’s it – the writers have figured out how to hack our group texts and know what we’re talking about.

BT: Looking at the world through the lens of the ’80s, but really addressing the myriad issues that women are facing today, is fascinating.

EW: It’s crazy that what we’re addressing in the ’80s is still relevant today. I can’t think of too many shows where they address it in this way, but that would be a whole other chat. What I love about GLOW is that there’s such an awareness and social responsibility within our show that it’s made us all become that even more so in our real lives. 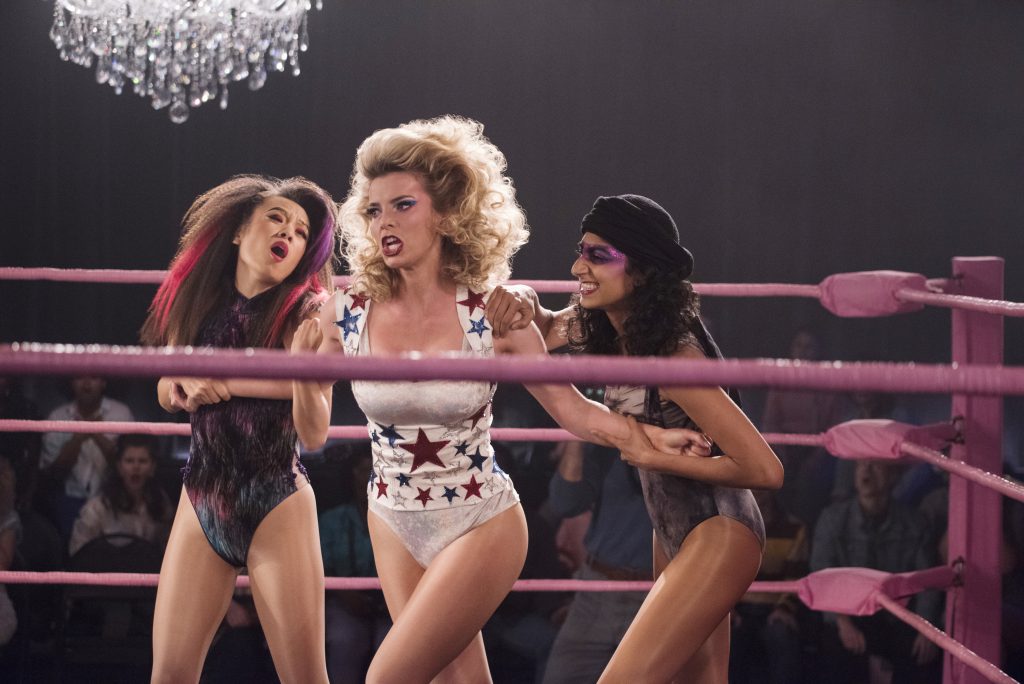 BT: Can you talk a little about playing two characters – Jenny Chey and Fortune Cookie – on the show?

EW: Well I had to learn about the world of wrestling; I never watched wrestling before GLOW. So when I read something on the page and it says, “Fortune Cookie says this”, I’m like, “What is this?? This is what I’ve been avoiding my entire life – I don’t want to be this person because she’s not real”. So when I learned about the world of wrestling and how it’s a story-driven sport, basically, and it’s a place where there are stereotypes, but they’re outrageous and crazy and so ridiculous, because the stereotypes themselves are so outrageous and crazy and ridiculous. There’s a power that you feel when you’re doing these moves on one another but doing them together, not just one stereotype and you’re the only one being pointed at. There’s 15 women, we’re an ensemble, so there’s 15 of us and we’re all being pointed at. So we felt like it wasn’t just a one person thing, it’s a collective thing. So it’s interesting to see the women go through that in the ring, and then to be able to have these storylines that follow these women outside the ring, and they’re not their wrestling characters – they’re human beings.

BT: What was it like having Kia Stevens, the one experienced wrestler outside the show, in the ensemble?

EW: Kia is incredible! And Chavo Guerrero Jr., he’s our coordinator of wrestling, and Shauna Duggins is our fight coordinator. But yes, Kia was a professional wrestler before GLOW and having her there is so awesome because she knows so much about the wrestling world. She really is the one rallying for us and pushing for us and also giving us little pointers. As a woman who’s been in the wrestling world for so long, she knows the industry’s ins and outs and knows all the little tricks and techniques. If we’re not getting something right she’ll say, “try to use your arms more” or “try to do this differently”, and she’ll know all of those little nuances. Not to say that Chavo doesn’t do those things, he does, but it’s also very different when you’re hearing about the experience from a woman. Our bodies are different, each one of our bodies are different, so it takes some adjusting. Kia has worked with so many different women of different sizes and that in itself is important. On the show, we all have to be physically capable to do all of the same moves. We all learn the same moves together and we all have the same bag of tricks and that elevates us. We’re this team learning these things together and it’s really exciting to see that if I don’t get a move one week, I’ll get it the next week, and vice versa with another girl. There’s this camaraderie where we just get so excited when we see, for example, somebody who’s been struggling with one move and then they get it. I just wish that I had 15 women with me all the time everywhere in life going “yeaaaaah!!”. [giggles] 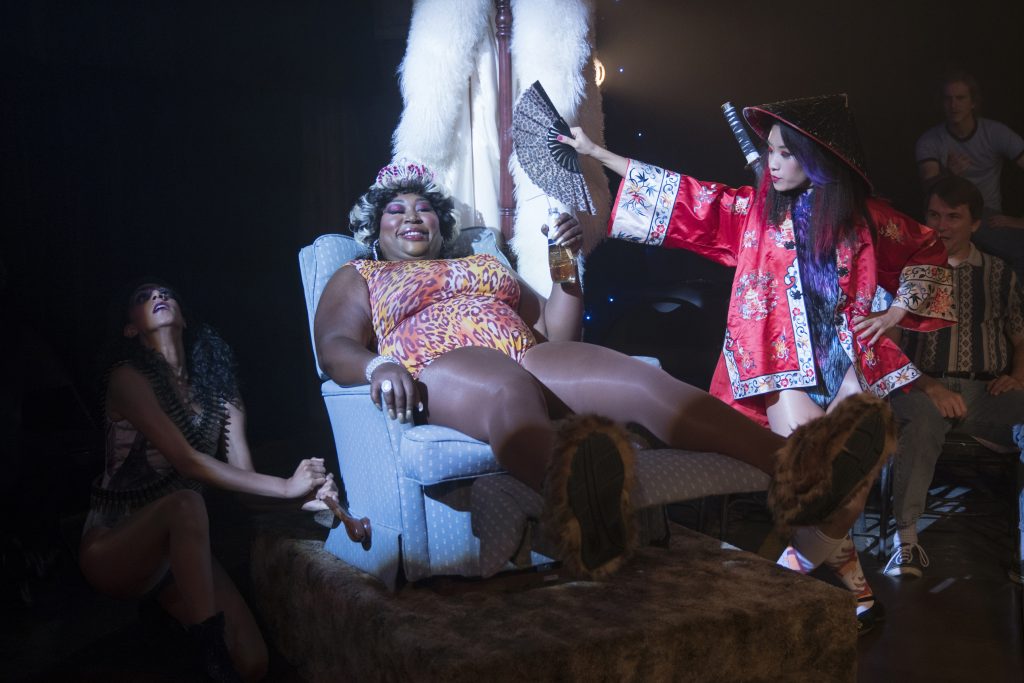 BT: Have you heard anything about a season 3 happening? As a HUGE fan of the show, I really hope there will be another season of the show.

EW: Yes! We need everybody to watch GLOW when it comes out! It’s because of you guys – it’s because of fans of the show passing the word around, telling everyone to watch the show. That’s what’ll get us back and we hope to be back. We definitely feel like a lot of people resonate with the show. The show itself is already crazy and if we were to take the show where it’s maaaybe going in season 3, we don’t know for sure, anything could happen. [giggles] We need a lot more than 10 minutes together to talk about that! [giggles loudly] Anything could happen!