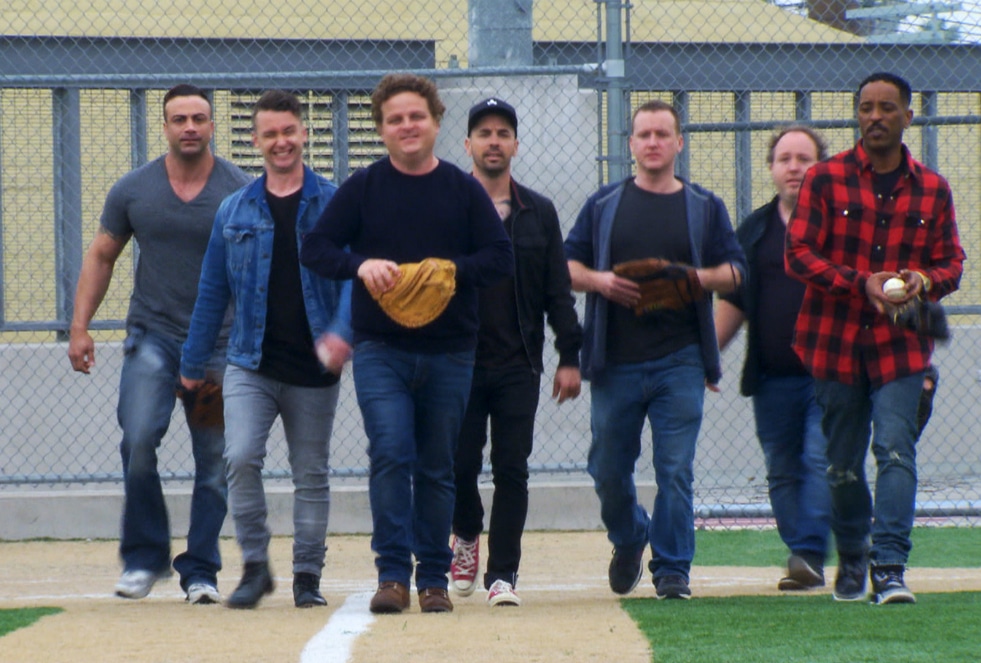 The opportunity to speak with Patrick Renna goes a little something like this…Patrick Renna? That name sounds familiar, oh wait, Ham from The Sandlot? You better believe it!! While Renna has enjoyed a number of opportunities since the seminal nostalgic film, it was a huge part of our childhood and hopefully a part of yours as well. I am happy to discover that Renna is finally getting a chance to open up about the film on its 25th anniversary, but also speaks a little bit about his upcoming guest starring arc on the wonderful Netflix show GLOW and about his love of Dwayne Johnson.

Here is an edited and condensed version of our fun interview.

Brief Take: I was really excited to read that you’ll be on the new season of GLOW. As a wrestling aficionado and as an admirer of quality television, I’m a big fan of the first season.

Patrick Renna: Oh me too! When I booked the show I hadn’t seen any of it, of course I’d heard of it. But my wife and I binge-watched the whole first season, which is so easy to watch. I think we watched one episode a night and sometimes we’d squeeze in two. It was so good though. SO good! It’s a great show.

BT: You’re in your element in your portrayal of a super fan.

PR: There you go!  The girls could all kick the crap out of me though. [laughs] But seriously, my character on GLOW was a lot of fun to play. I can’t talk about who I’m a super fan of on the show, but it’s such a fun role and I think you’ll really enjoy watching him. From what I’ve been told, season two is even better than season one.

BT: In your every day life, what are you fanboy of?

PR: I get really excited about sports players. When we went to Angel Stadium and I got to meet Mike Trout, that was pretty cool. I met Big Papi [David Ortiz] and that was pretty great too, and then I met Lamar Odom the other day in a restaurant. These guys are so larger than life, literally and figuratively. I don’t get as excited to see other actors because it’s what I do, so I’ve seen behind the scenes and I know how it all works. If I met Tom Brady, I mean forget about it. That would be it! Serena Williams would be amazing to meet too. I’m a huge tennis fan.

BT: We don’t want to spoil anything about season two, but we can say that your super fan character is named Cupcake. Do you like to bake in real life?

PR: I do! My wife and I bake a lot together and we joke about who the sous chef is. I think that honestly I am and she’s more of the lead chef. But I enjoy it. It does take a lot of time to do it right so when I find the time, it’s pretty great and I do love it.

BT: I saw that you were on Hell’s Kitchen too. I thought that you may have been a celebrity contestant on the show.

PR: That’s right. We were tasters though. We enjoyed some dinner and some wine. A friend of mine brought me to the taping. He got invited and brought me with him and that was a good time. Listen, I probably wouldn’t be the best Hell’s Kitchen judge because you’d be hard pressed to find something that I didn’t like to eat. Let’s be honest. [laughs] I’ll eat almost anything.

BT: The Sandlot holds a special place in a lot of people’s hearts and still, to this day, people talk about how much they love it.

PR: I think it really has an effect on people. It has that nostalgic feel and it’s something that people really respond to. I actually haven’t seen the guys in 25 years so it was the first time we’d reconnected. We were on a baseball field in not quite downtown LA, and I was the first to get there that morning, so I was standing at the edge of the field and watched everyone from across the field, Field of Dreams style. I watched them through the fog appear, and that was pretty cool in itself. [laughs] It was great. I saw a comment on a post that said that if we were really meta we would have had Mike Vitar there and then Grant Gelt wouldn’t even have shown up. [laughs] But it almost worked out perfectly.

BT: Did it feel like 25 years had elapsed or did you get the feeling like no time had passed at all?

PR: I think it was a combination of both. It felt like 25 years when I first saw them but then we really fell right into it. We all went to dinner one night and we went back to the hotel and just hung out for a couple of hours. We caught up and talked about deep seated things, some non-important things, family, politics and sports and it was fantastic. I realized then why the movie was so great, because we all got along.

BT: As a sports fan, how surreal must it be to have your Sandlot character’s face as Kevin Durant’s twitter avatar?!

PR: It’s pretty great! What would make it even more special is if Mister Durant invited me to the NBA Finals. Court-side seats, a couple of drinks, you know. [laughs] I haven’t talked to him about it but I’m not sure why he has that picture in his profile. I’m sure there are a lot of things about that character that he identifies with. You know Kobe Bryant is a big Sandlot fan. Kobe is probably showing the movie to his daughters and Kevin is probably being shown the movie as the middle generation there. It hits all the generations and transcends generations and it’s crazy.

BT: As someone who plays sports, would you say you’re a team player or more of a Ham?

PR: If you ask me, I would say I’m a team player. But if you were to ask some of the guys that I play with, they’d wholeheartedly disagree with me. So you choose what you want to believe. But I might be a slight trash talker on the basketball court.

BT: You took a little bit of time off acting to devote yourself to being a full-time father. At what age do you think you’ll show The Sandlot to your son?

PR: Oh I don’t know. Right now he loves Moana and singing songs from Moana a hundred times a day. I swear, when I meet Dwayne Johnson I’m not going to thank him for his other amazing movies and wrestling career, I’m just going to thank him for Moana because he’s given me more joy through that than anything else. You’re Welcome is just the best. But I do think I have a few years before my son can watch The Sandlot. I did show it to him briefly and he did recognize me. He was very focused on it, even though what he watches mainly is cartoons. I’m guessing when he’s 6 or 7, that’s a good time to start showing it to him in full. But hey, if you can get me Tom Brady, Dwayne Johnson, Serena Williams and Kevin Durant, that would just make my day.