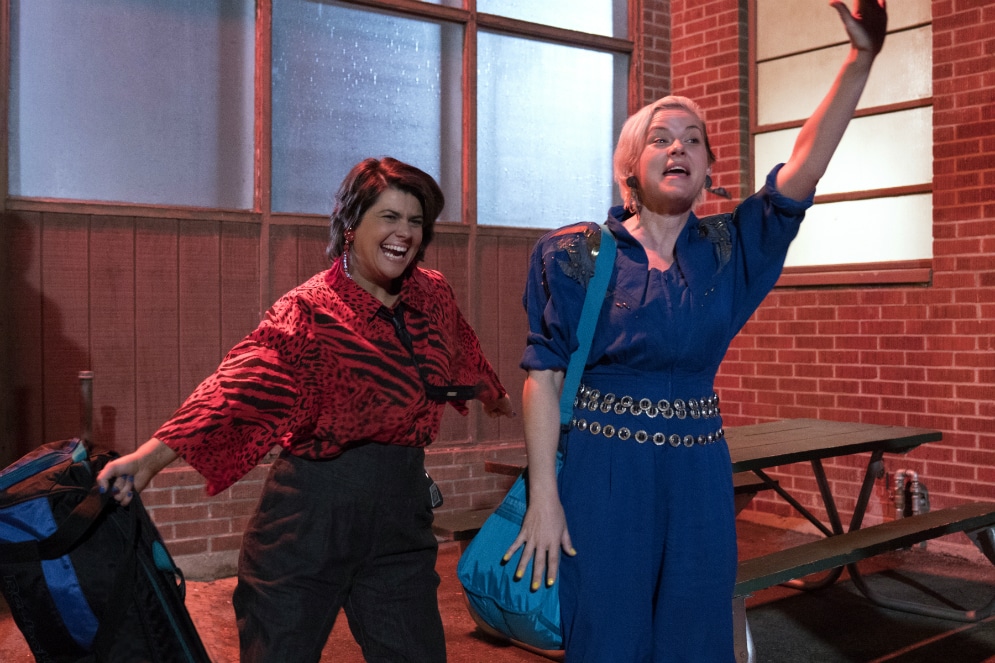 Speaking with Rebekka Johnson of the series GLOW was really like going up against the gauntlet. She would say something extremely funny, and then follow it up with something quite serious and somber, and then go back to funny again. It was a lot to take in during a brief interview, but it was a real treat to speak with the actress whose in-ring character on the series is Edna Rosenblatt.

Here is a condensed and edited version of our interview with Rebekka Johnson.

Brief Take: What part of wrestling was the most difficult for you?

Rebekka Johnson: Doing a back bump, in which you have to land on your back. It made me nervous because you can’t see where you’re going, also if you do it wrong you kind of give yourself whiplash, and so that was more nerve-wracking than falling on my front because you can see where you’re going, and it took me a really long time to get the move right.

BT: What it is about this ensemble that makes you all such a great team?

RJ: I love hanging out with the girls. I mean I love the guys as well, but the girls, we have a special vibe because we wrestle together for four weeks and it really kind of levels the playing field in that it didn’t matter who had what level of experience in TV, we were all there learning a new thing, except for Kia [Stevens], who is a pro wrestler. Coming from an Improv background, I love collaborating on comedy, and we all do that constantly, like text chains, Instagram stories, just hanging out. If I hang out with any of them we go really deep, and talk about deep personal things, but we will also run bits for hours. And it’s like being at a slumber party when I was a kid, except nobody is freezing my bra because usually we’re not wearing any. [laughs] I feel like they really got a sense of everyone’s personalities and could tell that we were going to all be really open, and nobody was a diva. And the mix came together in the right way, and now we’re all divas put together. [laughs] 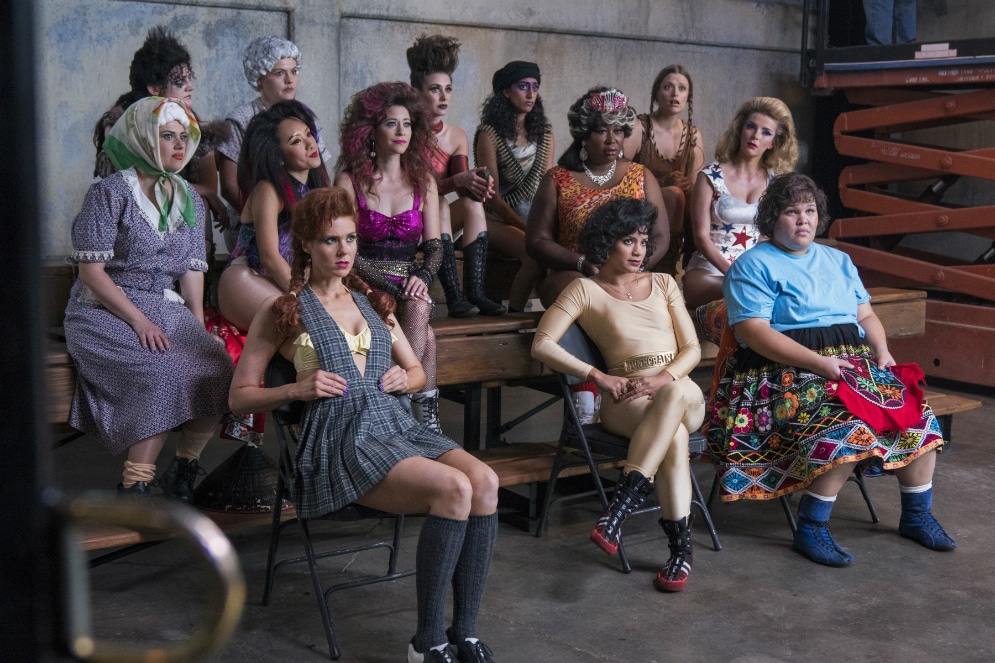 BT: Is it true that you had a bout of food poisoning when you were filming your final match in season one?

RJ: My God, yes. [giggles] Episode 10, between wrestling, I was throwing up and everyone thought I was pregnant, and I was like “I swear, I’m not pregnant!” [laughs] It was definitely one of the craziest times of my life, because we were shooting at the Palladium, which is a rock venue in L.A., and between takes I had to be in the green room, where I’m sure a lot of rock fans throw up from doing drugs, and it was just like a disgusting smelling room. I was in there feeling so sick, and I was working so hard because you’re so excited to get a big match, and then something so stupid like food poisoning was getting in the way, it was so frustrating. But in my full Biddies makeup I was back there getting sick, and a doctor came to set and gave me some anti-nausea stuff. I was being treated really well and they kept saying, “if you need to go home, you’ll go home, we’ll take an insurance day”, and I kept being like, “I can do it”, and Kimmy [Gatewood] would come back and would be like “They just need you for one more close-up”, and I was like, “I got this!”.  I would do it over and over again and the adrenaline would get me through, but as soon as they yelled “cut”, my stomach would hurt again. [laughs]

BT: Can you tell me about your experiences with comedians prior to the show?

RL: Yes, I was the director and producer of the show called Speakeasy with Paul F. Tompkins, and I got to meet a lot of people in the business that were my heroes or that I looked up to, and in fact, Marc Maron and Alison Brie were both guests on the show, well before GLOW ever happened. And I got to pre-interview them, and direct the episodes, and working with Paul F. Tompkins was amazing. Also, I worked a lot with Rachel Bloom of Crazy Ex-Girlfriend. I directed some of her first stage shows, I directed one of her music videos, and I continue to collaborate with her.

BT: Your viral videos seemed to anticipate the state of the industry, which is something you really seem to examine through GLOW.

RL: In the entertainment industry, a few years before GLOW, I had experienced a pretty bad incident of sexual harassment at my job, and didn’t come out and didn’t talk about it, and didn’t even complain to my boss, someone complained about it on my behalf, and my job ended after that. So instead of doing a personal essay, or talking about it in an outward way, I just put that stuff in my comedy, and that’s kind of where I feel comfortable talking about it. I think that this stuff has been happening for so long, and whatever is happening in my life, or happening in my friends’ lives, we put it in our comedy. And it just so happens that right now people are talking about it out loud, so I actually wrote a short film that I will be shooting this summer, all about the issue of consent and yeah, how I like working through things in comedy. [laughs] I love doing Improv comedy at UCB and the Pit and The Ruby in L.A., and I love collaborating and improvising. 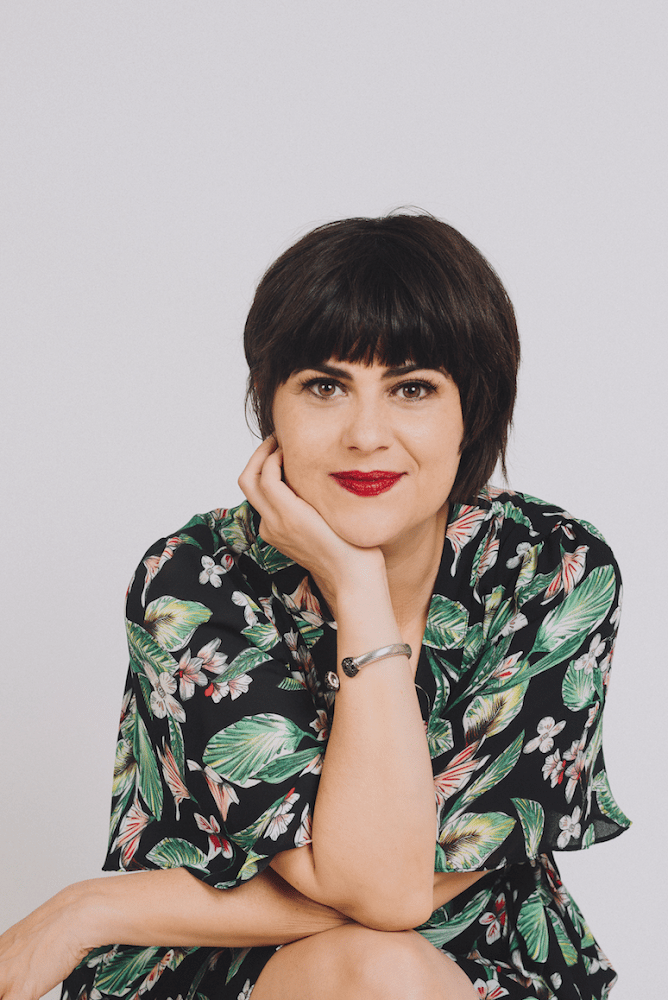