written by Charles Trapunski May 8, 2018 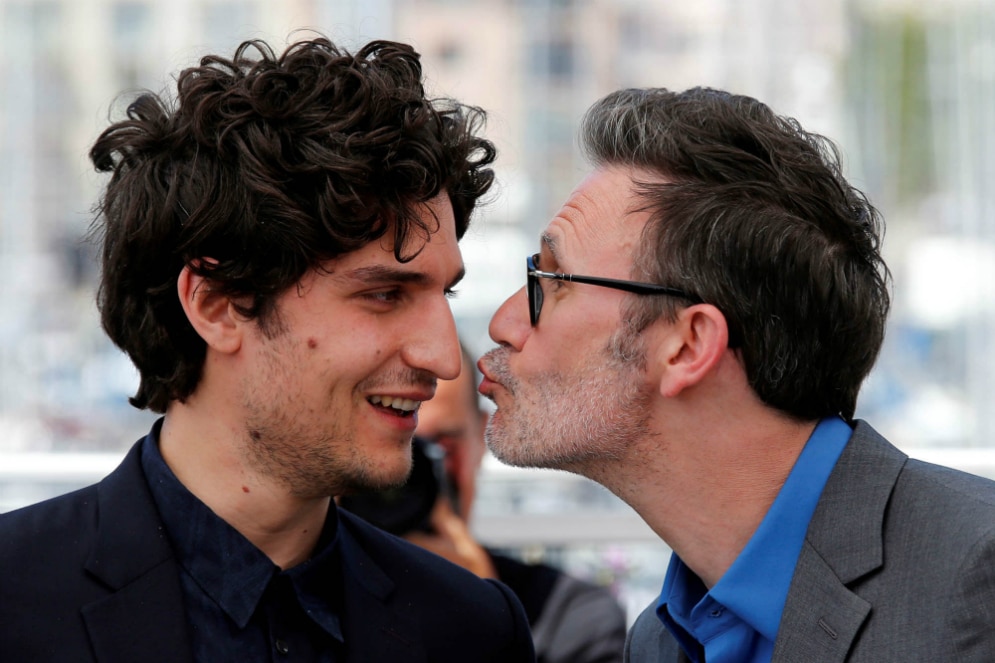 We did not expect that the final weekend of TIFF would be so rife for philosophical discussion, but this is what happened when we spoke with Academy Award winning director Michel Hazanavicius and actor Louis Garrel of Godard Mon Amour. The film is quite funny, but also very serious and the reflection upon listening to the interview is that the discussion took on the same tone as well. Garrel and Hazanavicius certainly challenged us to explore narrative tropes.

Between bonding over a lack of understanding of Snapchat, Hazanavicius and Garrel both are able to take a sit down interview in a hotel suite into a discussion of the role of audience member and director. The debate enhances the film, which opens at the TIFF Bell Lightbox Friday, May 11th, in time for the 50th anniversary of May 68.

Brief Take: What do you find so special about Jean-Luc Godard?

BT: You also starred in The Dreamers, which makes many references to Godard…

LG: Ah, The Dreamers. Bertolucci was a big fan of Jean-Luc Godard, they were friends at the time, and I heard that Bertolucci at the time he was young, he wanted to speak French because he said that French is the language of cinema. When you are twenty years old and discover Godard, I think you want to speak his language, you are completely immersed in his world. In The Dreamers, there are references to Bande à Part, for example. This is the major reference in the movie, because Bernando really recreated the challenge to run into the Louvre, the three characters that wanted to break the record. I will always be a big fan of Jean-Luc Godard, and when I first read the script, Michel said that he wanted to make a movie about May 68, and for me, it’s a great pleasure and great fun to see on screen that period, it seems to be a very Romanesque period, the time seems to be much more electric.

There is a little bit of distance in Michel’s movie of what it is to be political, like ideological and the politics of the period. I liked the fact that the tone was a comedy as well. It interacted with politics and intimacy, about how you can fight with your friends about politics. That’s what we think about May 1968, where friendship and politics were mixed, and when you could lose some friends because of politics, and with the tone of a comedy.

BT: Do you think that a movie could ever be completely democratic? What role does the audience play?

LG: We had a discussion with people who were on the set of Le Vent d’est, Godard’s first film with the Dziga Vertov Group, but when we talk to them about how the atmosphere was on set, because they were voting “which frame do we use, which objective”, and when we asked them “How was the atmosphere?”, the guy became red and said “it was a nightmare”, and some people said “today I don’t want to work”, and the comedy of the film and the contradiction and to make fun, because it’s a deep subject, but let’s use a comic tone to make people more entertained.

MH: I think that people participate in the narrative of the movie and they were doing half of the job in The Artist, for example. People recreated so many things, and for this one I try to leave some room for the audience. And this one, it’s funny because people don’t get the same story depending on who they are. For example, some people say that this guy was very heroic and some people say that he decided to be free and he decided to do things and this is grand. This is lyrical. And some others say “This guy is an asshole”, we don’t care about his decisions and we don’t talk to people like that, and we don’t consider our wife this way, for example. That means one of them recreates part of the story with his own experiences and the other creates another.

BT: How does the time of the film resemble and differ from that of right now?

LG: People right now in France, especially the young people, go into the streets to talk about the society, I think that they do it without any ideology. The ideology left as the Berlin Wall came down. It’s a big challenge because we don’t have to choose your camp, it’s a bigger challenge to try to think of a speech to bring people together and to make something more pragmatic and more just. I think it’s the end of ideology.

Godard Mon Amour opens at the TIFF Bell Lightbox in Toronto on Friday May 11. To win Run of Engagement passes to see the film, click here!