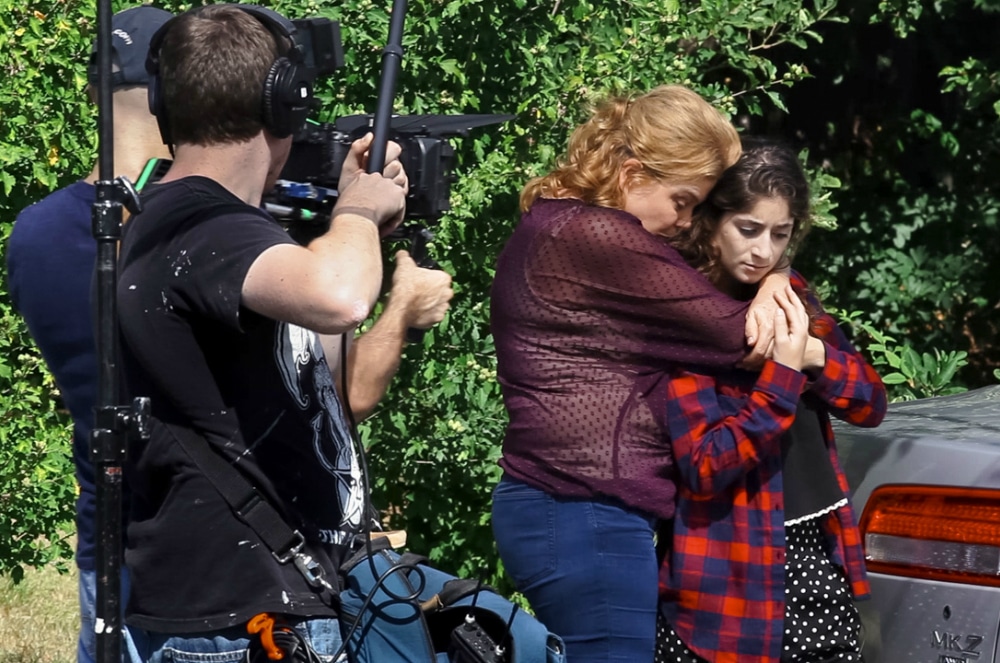 Gold Star is a very personal labour of love for first-time filmmaker Victoria Negri. For her debut feature, Negri wrote, produced, acted and directed a spin on her own autobiographical tale of caring for her ailing father. The physical and emotional toll it takes to tend to an incapacitated loved one is brilliantly captured in the film as Negri uses tight close-ups to convey the vulnerability and deep-seated loneliness each character feels. Playing her on-screen mother is Orange is the New Black‘s Catherine Curtin, while her stroke-ridden father is portrayed by screen legend Robert Vaughn (in his final theatrical performance). Both actors give tour de force portrayals of people stubbornly trying to hold it together for the sake of their family members, their admiration for one another clearly palpable on screen and off.

We had the wonderful opportunity to speak on the phone with the lovely Victoria Negri and Catherine Curtin about Gold Star. The following is a condensed and edited version of our warm conversation.

VN: First of all, thank you so much for saying that. I worked with a casting director in New York,  Judy Bowman, and for Robert’s role, we made a list of actors who were older, had a ton of experience and we hoped would want to do the role. And Robert was at the top of that list. We sent his Manager the script and within a week he wanted to be a part of it. I never thought we could get somebody of Robert’s stature, especially because it’s my first film. And then Cathy, she auditioned with a lot of other actresses and she stood out so much. She’s just so natural but also, for me, she also knew how to balance vulnerability with also being strong. It was this balance of being a mother who’s protecting their child from these overwhelming emotions but also letting it out at times. Cathy immediately got that, from the first moment I worked with her. But they’re just wonderful people. Cathy and Robert were so open in terms of discussions we had about their families and my family, their experiences losing people…Robert told me about his father and Cathy lost her father at a young age. So I think it was all a matter of really getting beyond surface conversations and that made us all very close. I’m glad it translated on screen.

CC: And Robert was such a gentleman and such a teacher of how to be in the world on set and how to be part of the team. He was the coolest guy in the world. I just feel like Robert was mellow and kind and funny and he would just sit and tell stories. I feel so grateful and lucky that we got to work with him.

VN: We really felt like a family. Working with Robert, I mean he was such a legend.

CC: Definitely. But I also think, Victoria, that you’re the kind of person that people are drawn to. I was so enamoured with you on set. You were really doing the work of ten people and you were doing it in a way where you’d always smile and were always calm and generous with your time. I love people who are out there and doing it for themselves, and you’re one of those people. You genuinely touched my heart and impressed me.

BT: Catherine, you’ve managed to balance brilliant work in independent films like this one and Beauty Mark with your work on Stranger Things, Insecure and Orange is the New Black.

CC: Yeah, the tv world is interesting and fun but my heart, forever and always, will be with indie films. I admire people who are on their own and doing it with very little help and making it happen. I know the Duffer brothers and Issa Rae and Orange too, I know they also started off with just a small idea. Insecure, for example, started off as a web series. I think what I’m learning and really humbled by is if you feel like you should do something, you should do it and you can do it. The Duffer brothers are the sweetest, kindest, most gentle people ever. They are good people who are fighting the good fight. That’s what I’m really grateful about in terms of the shows that I’m on – across the board they’re all good people and are putting things out in the world that need to be talked about and need to be said. But I love working with first time filmmakers.

BT: What are you working on next?

VN: Well the whole time I’ve been promoting Gold Star, I’ve been acting and producing other projects. I’ve also been writing another feature script, with the intention to direct it. When Gold Star is completely wrapped up and released, I’m going to launch right into getting that done and focusing on that one hundred percent.

BT: Are there plans to release Gold Star in Canada? I think Canadian audiences will really appreciate the film.

VN: I would love to bring it to Canada! I’ve definitely been investigating it.

CC: The Canadians I know are very cerebral and smart, very mellow, very together people, and I think they really give art a chance. I think it’s true, Vicky, I think the film would do really well in Canada.

Gold Star is playing until Friday November 17th at the Cinema Village theatre in New York, with a nightly panel discussion following the evening screening. The film will then play at the Noho 7 theatre in LA starting on Monday November 20th and is currently available in the US on Amazon Prime.