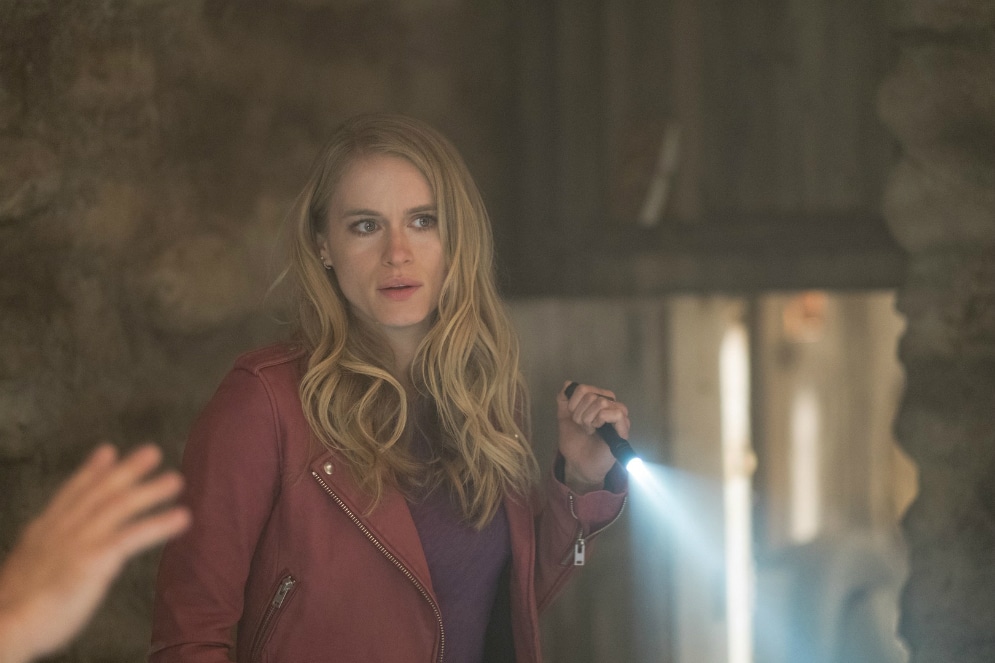 Actress Leven Rambin is a one of a kind interview. She was refreshingly honest with us about her personal demons and how her own emotional and mental strength was channeled into her portrayal of Kit “Kick” Lanningan in the WGN America limited event series Gone (based on the Chelsea Cain novel One Kick). The multi-talented Rambin will soon be seen in the Netflix original movie The Dirt, a biopic about Mötley Crüe, and also delivers an incredible performance in the film Lost Child. Quite honestly, she’s mesmerizing in every recent project that she’s appeared in because it’s obvious that she’s putting so much of herself into each role. Definitely check her out in Gone, as it’s a tour de force performance.

The following is a condensed and edited version of our exclusive sit down with the unique Leven Rambin.

Brief Take: People have really responded to your performance and role on Gone! What does that mean to you?

Leven Rambin: To me, this role in the story is really impactful and personal and meaningful. I think for me, Kick taught me how to survive, and because I was going through a devastating thing at the time in my own life and I was doing this role, I was like “if Kick can overcome these things and face these fears that are so extraordinary, I can too!”. Sometimes it’s about putting one foot in front of the other without feeling like you want to, or feeling like you are ready and just doing it, because sometimes the feeling comes from behaving before you feel ready and it’s about being brave. That’s such an important thing, not only for me, but for girls everywhere to see. I’m really proud that we’ve made content that speaks to that. You don’t have to be a survivor of sex trafficking and abuse to let courage and bravery land on you. I’ve had girls that have watched me in The Hunger Games and Percy Jackson and Chasing Mavericks, and all these things that are so much fun, and now they’re seeing me in this role and it’s speaking to them, and I’m so thrilled that they’re digesting and receiving this message. It’s speaking to a deep part of them. They’re writing these really loving messages and comments of how proud they are of me and how much they’re moved and touched. So yeah, people have been really authentically supportive and it’s been really nice. 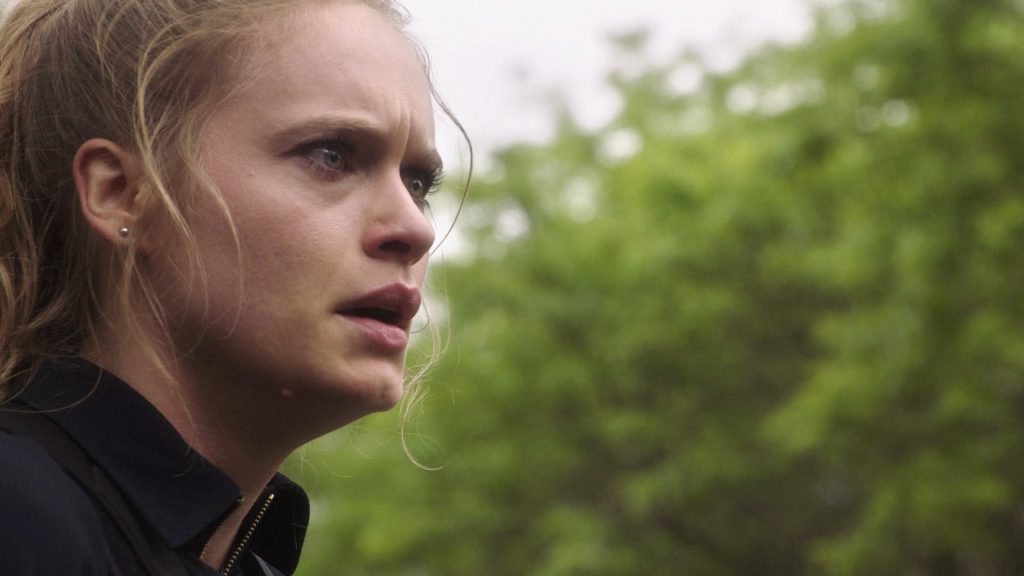 Brief Take: Playing a role like this, it must be tough to compartmentalize it and keep it separate from your daily life.

LR: I mean I try to keep it separate, but once you’re learning things about the world, about people, things to which you aren’t exposed on a day-to-day, it can’t help but affect your spirit. When you’re pretending and imagining and putting yourself in a situation to relate to it, your body doesn’t know that you’re joking around; your body doesn’t know that it’s just pretend. So it does affect you more than you would hope. I did play a lot of music on set just to keep myself afloat. Every time I would walk on to set, or in between takes, I would be blasting Despacito [chuckling] or Taylor Swift’s album came out at that time too, so anything to keep me kind of energized and my mind in a different place.

BT: I’ve found that your roles recently all tend to be similar in one way or another, with Gone especially, but also with Lost Child and The Path.

LR: That’s very insightful. I think that it’s my quest to be extremely meaningful in my work and have work be meaningful and move people. I don’t see a point of participating in the entertainment industry unless it’s meaningful and impactful. The stories should breathe life into another person and inspire or empower or cultivate insight for whomever is watching. I’ve had the blessing and the responsibility and the gift of playing women that—yeah, they have to overcome fear, they have to overcome their past, they have to basically be born again in some way. I believe that’s a huge metaphor for everyone, in life and certainly for myself in my own life and moving forward; being authentic to that journey in my roles is really important.

At a certain age, I felt a call to dig deeper into myself and be more authentic and be more vulnerable and be more raw: because if I do that, then other people might have the courage to do that in their lives. So that’s what I’m aiming for in my work. I don’t care about embarrassing myself, I don’t care about pushing myself to some limit or past a mind limit that I thought I had. Whether you think you can or you think you can’t, you’re right. So I started pushing past some internal limitation, where that came from, I don’t even know but we all have that, right? So I started pushing past that and questioning: “Why not me? Why not?! Why not me?! I don’t get it. Who is a person that is more qualified than I to do this?”. In order to do that, I had to make sure I was prepared and make sure I was that person that I wanted to show up in my work. I trained and I became very conscientious about the work itself, and then I pushed past the imaginary lines. It’s been amazing to see what I am now really capable of. 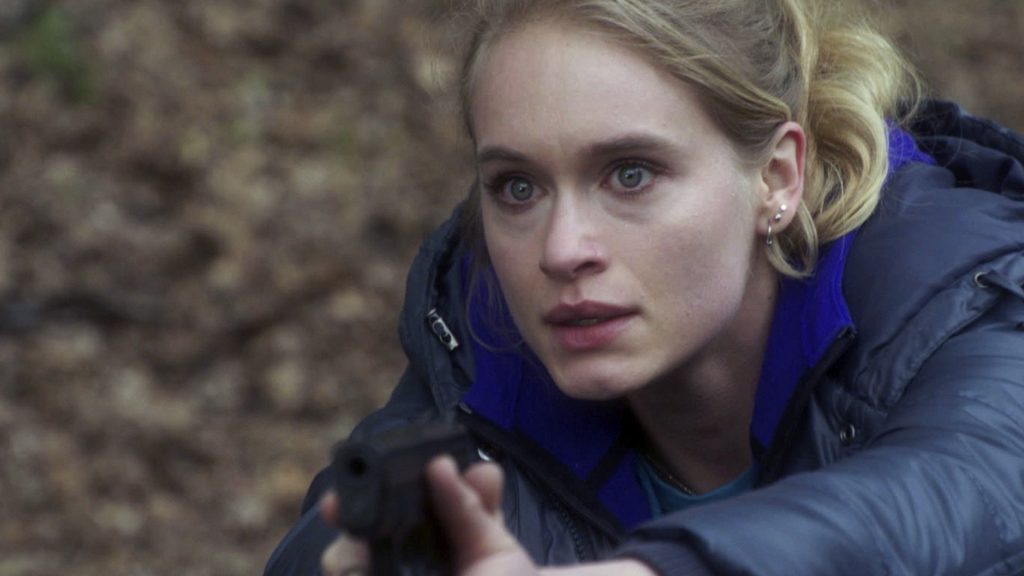 BT: Who have been some of your favourite scene partners?

LR: I loved working with Chris Noth in Gone. We work in a very similar way and trained similarly. There was always a lively discussion about the scene, the relationships, the characters, and the history and the meanings, but it was always light by the end of it. We would talk very deeply and then let it all go and see what happened, and we had some really fun, spontaneous things happen, and that was really, really fun for me.

Amy Adams is my favourite actress and I would love to be in the same room as her. She’s just so in touch with her vulnerability and that is what gives her strength, in a way, like she’s strong but she’s vulnerable, and it comes from willing to be so vulnerable, and that fascinates me.

BT: What can you tell us about The Dirt? We’re so excited to stream it on Netflix.

LR: After Gone, I wanted to do something that was young and fun and sexy, because Gone was psychologically intense. I wanted it to be a little carefree a bit and just rock out and have fun and let loose a little, and this was the perfect opportunity for me to do that. The project was gestating for about eight years and at one point I was supposed to play Heather Locklear and at another point it was supposed to go away. It had many iterations in my life. Then it came around and I was very excited to be a part of it. 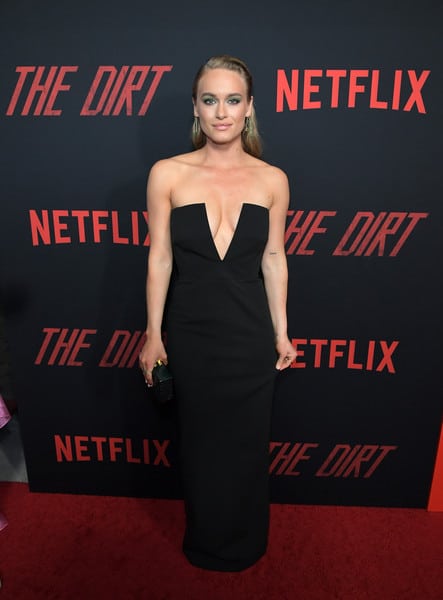 BT: We’re also very excited for your project coming up with Ron Perlman. What can you tell us about that one?

LR: London Calling is a wild ride of sex and violence. We did it in Kentucky and the local life is so particular – it’s like ‘backwoods noir’, if that makes sense. It’s like a ‘redneck noir’ film. [laughs]

BT As a singer, what music inspires you and what is your go-to karaoke song?

LR: Wow, that’s interesting. I think music really speaks to your soul in a way that is indescribable, so it’s really important what you listen to because whether you know it or not, you’re feeding the beast, or you’re feeding whatever it is inside of you. So I try to listen to things that are empowering and fun and light, well maybe not light. Queen is my favourite band, that’s why I’m obsessed with this movie (Bohemian Rhapsody) because everything they had to say in their music was so deep. …Baby One More Time – that’s my own favourite karaoke song. …Baby One More Time – really deep and meaningful stuff, but unbeatable melody. [laughs]

BT: You recently attended a Woman in Film event and are an integral part of the industry. What do you think is getting in the way right now of more acceptance in terms of female filmmakers?

LR: I think it’s a long process, but I’m really grateful that it’s begun and people are turning the tides with every decision that they make and with every word that is spoken on set. With every script that is written by a woman and every director that is a woman is hired, as a woman, every small action is changing the tides. I feel that just in the way that anything changes, in this industry or anywhere, 5 years ago people were saying that TV shows were going to be on apps and network TV shows would be obsolete, and we all were like “no, there’s no way”, I couldn’t imagine it being this way, but of course, now that’s exactly how it is. So I think that the brave women that have come forward and are willing to sacrifice their jobs or their reputations for this movement have set the groundwork for a multi-year process. That’s why I’m not discouraged; I’m excited and encouraged by the future because it has started now, and it will only continue.