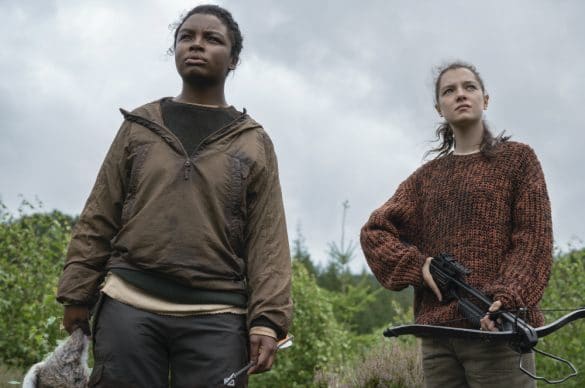 Without giving anything away, Hanna season two (out on Amazon Prime Video tomorrow!) has even more twists and will keep you on the edge of your seat even more than season one did. At the core of the new season lies two of the most emotionally resonant performances you’ll see on screen this year, from Esme Creed-Miles and Yasmin Monet Prince, building on their already impressive turns in season one of the action packed series.

As per the official synopsis: In season two, Hanna (Creed-Miles) risks her freedom to rescue her friend Clara (Monet Prince) from the clutches of the Utrax program, now run by John Carmichael (Dermot Mulroney) and his second in command, Leo Garner (Anthony Welsh). Hanna finds help in the unlikely form of her previous nemesis, CIA agent Marissa Wiegler (Mireille Enos), who must protect both herself and Hanna from the ruthless organization she once trusted. Yet as Hanna delves deeper into the elusive world of The Meadows and meets others like herself, including Sandy (Áine Rose Daly) and Jules (Gianna Kiehl), she begins to question her role in the larger context of Utrax’s assassin program and ultimately, where she truly belongs.

This season proves to be one of enormous self discovery and growth for both young ladies on screen and it was a pleasure to chat on Zoom recently (along with a select group of international journalists) with Esme Creed-Miles and Yasmin Monet Prince about their revelatory performances. The following is a condensed and edited version of that Zoom conversation.

The work you do on this show must be incredibly difficult, especially in terms of the physicality involved. What’s been the hardest thing you’ve done on set?

Yasmin Monet Prince: I think the hardest thing for me was the first fight scene that I have in episode one. I do a lot of high kicks with a lot of force and you can’t be flimsy with it, so that was a challenge, but I got there in the end.

Esme Creed-Miles: For me, it was running. You know she’s always like this [mimes hand movements while running with a serious face] and you have to do that over and over again, take after take. I hate that. Nobody enjoys running, anyone who says that they do are lying. [laughs]

YMP: The biggest challenge was the physicality of it and how much work I would have to put in. Being able to keep up, not getting tired, being able to do a lot of takes, and I did not expect how emotional my character would be. I didn’t expect that, that just came on the day and how I played it in the scenes.

ECM: I think working in television you have a very limited time to get your performance done and done well because you have so much to shoot in such a short space of time. So that, for me, was the biggest challenge of working on this show because it puts the pressure on you. But it makes it worth it and it helps when you’re working with other talented individuals and have a great support network, which is the crew and the cast. 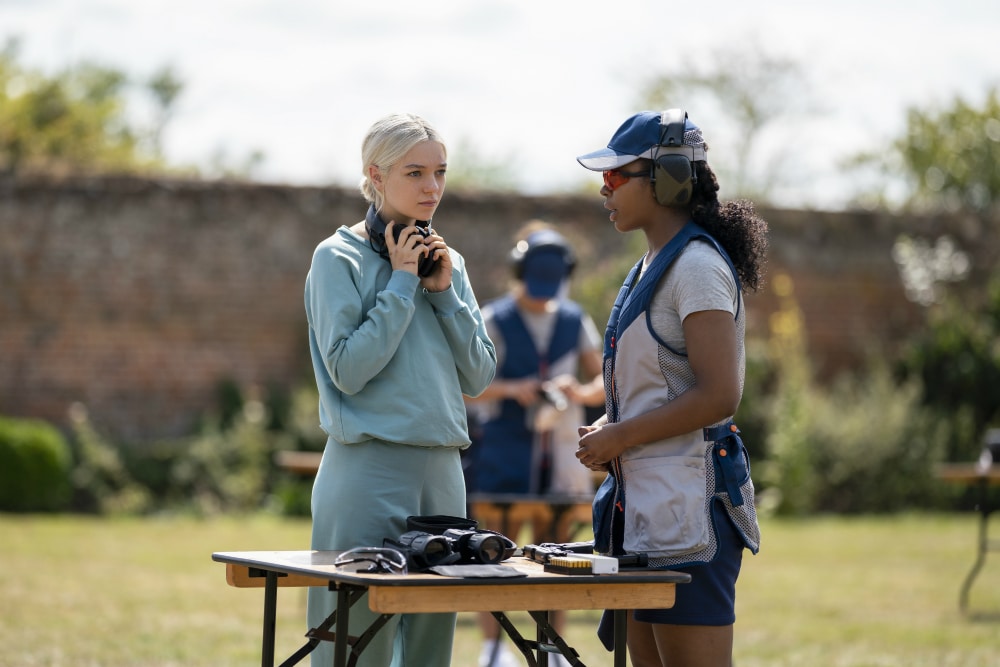 Esme, Dermot Mulroney said that you’re really wonderful to work with. What was your experience like working with the new cast members this season?

ECM: How very nice of him. [laughs] Do you know I loved working with Yasmin and Mireille especially. I didn’t really get to work with Mireille that much in season one and it’s really great to work with people who are really great at what they do. Seriously, because if you’re an actor and you’re trying to do a scene and the other person is hammy or not quite bringing it, it’s harder to do your job because you’re having to suspend your disbelief that much more. So when you’re working with Mireille or Yas, and I had a lot of scenes with them, the chemistry is so great and it’s really fun to enjoy your work like that. They weren’t necessarily new faces because they were in season one, but I was working with them a lot more.

Brief Take: Did you have a favourite moment or scene to shoot together?

YMP: I really liked our scene that we did on the last day where we were in the arena and Hanna comes to Clara to tell her that…oh I don’t want to spoil anything! But there is a scene where there’s a realization and I don’t know how to explain it, but you see that caring relationship that’s been formed where you see that Hanna is here to protect her and you’re going to do what she says because you know it’s right and that’s why you’ll follow her. That was a really beautiful scene to shoot because it was really natural.

ECM: That was amazing that day. [to Yasmin] Do you remember, I forgot my lines over and over again. And that happens sometimes! I had a brain meltdown, it was so embarrassing, but I channeled my frustration into my performance. I was really crying. 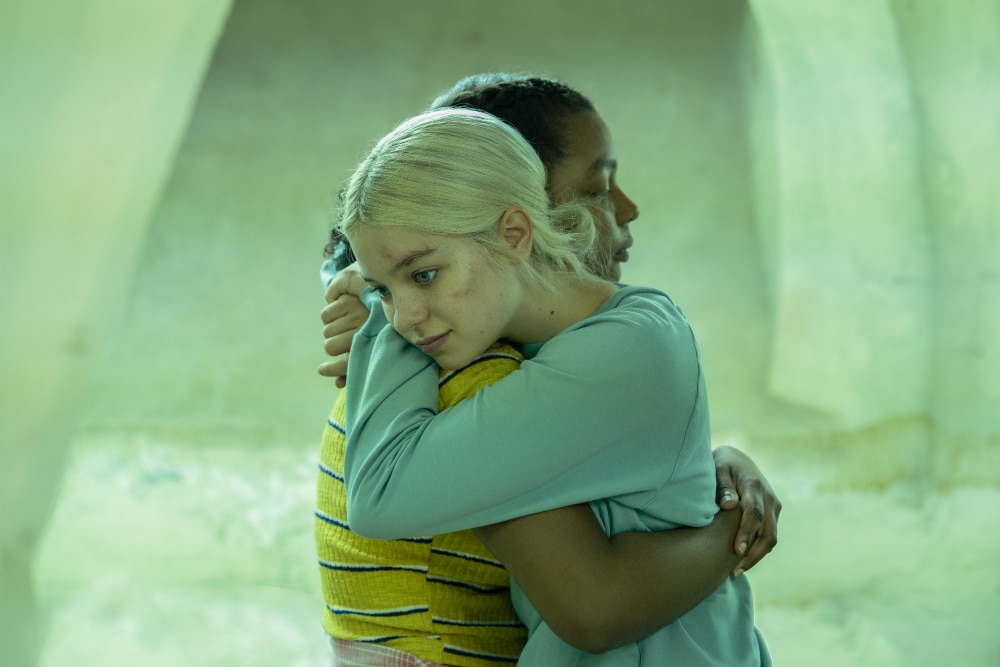 YMP: I think how natural it was. Esme is so talented at what she does and, for me personally, watching her she knows what she wants and it’s really inspiring to watch. I learned a lot from that.

ECM: That’s really nice, thank you. Yasmin is so funny because [to Yasmin] I’ve never seen you once say something you didn’t mean.

ECM: But also, when something is annoying her, she just has this face that’s just stone faced. And then I’ll ask her to do something she doesn’t want to do, other people would be like “oh sorry, I can’t!”, and she’d be like “no”, you know what I mean? She is who she is and I fucking love that because it’s so genuine and a fantastic quality to have that and be so real.

What did you bring of your own personalities and lives to your portrayals of your characters?

YMP: I think me and Clara are completely different. I think with Clara she’s very confused about who she is because she has no idea who she is or where she comes from. It’s a clean slate, she has no idea if her last name is real, she doesn’t know! [laughs] But with me, personally, growing up I’ve always had a very strong relationship with my parents and that’s had an impact on who I am. I don’t think I’ve ever changed, personally. I think you figure out stuff like what you want to do and what you’re interested in, but as a person I’ve always felt quite strongly in who I am and where I come from. That’s the difference between me and Clara.

ECM: I think I relate to the feeling of absolute overwhelm with the world and feeling totally disassociated from everyone, and I think that’s something that a lot of people can relate to.

Tell me about the evolution of your character from season one to season two?

ECM: For me, getting to play Hanna and really getting to know her as a character throughout season one, coming back into season two it feels like putting on a really comfortable pair of shoes. It’s a joy and a privilege to be able to see her evolve in the story.

YMP: It was definitely suggested in season one that Clara would have more of a storyline in season two, but I didn’t know how much more, but that was exciting. 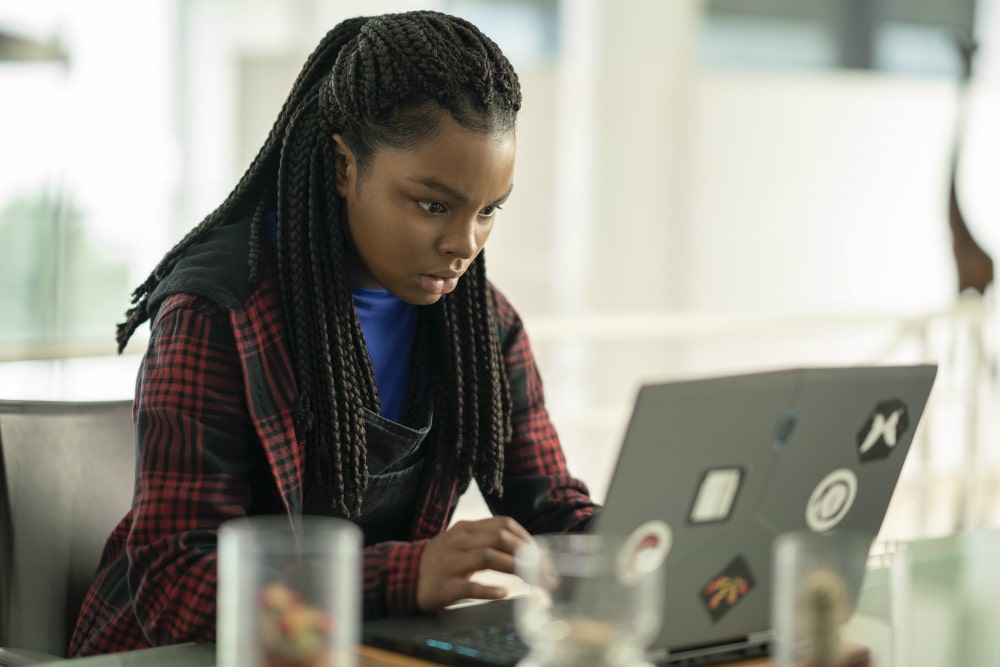 How did you feel about having female directors this season, especially in a show that’s centred around young women?

ECM: I think it’s fantastic because the story is written by David (Farr), who’s a man, so it’s necessary to have a woman come on board and bring that story to life. I don’t think there’s a huge difference with working with men and women directors, I think it depends on what the story is. So if it’s a female-led story about the female experience, it helps to have a woman because they know what they’re talking about and they can empathize with your point of view. But I don’t think that discriminates against male directors in general, if that makes sense.

YMP: I agree with what Esme said. I think when you’re showing what women really talk about amongst each other, it helps when there’s a woman behind the camera. 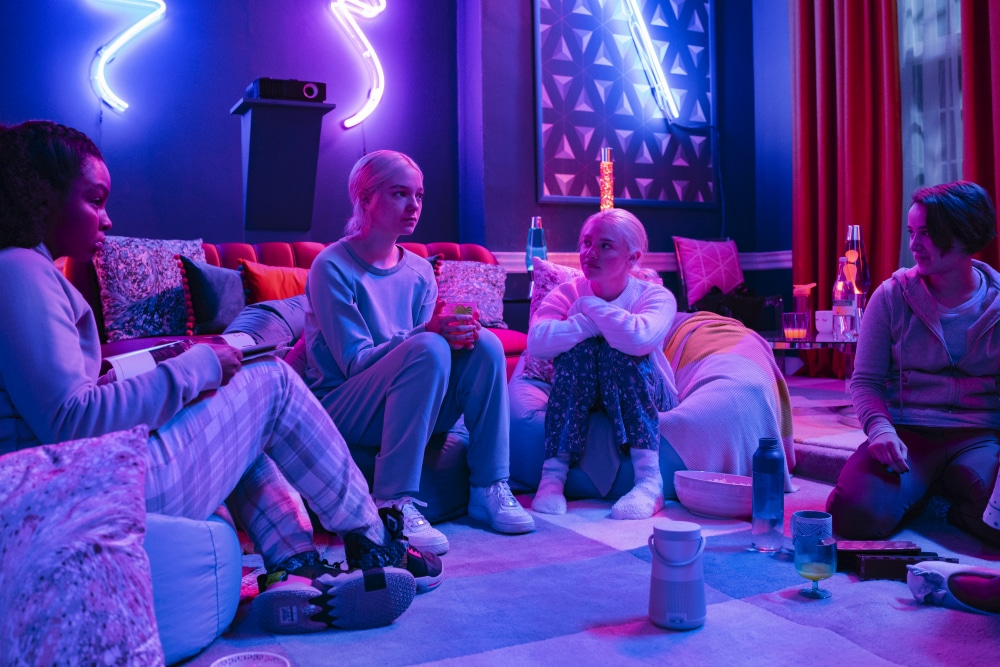 Is there a scene that you shot that you were really looking forward to seeing how it looked on screen?

ECM: I wasn’t in this scene but I was there on the day when Mireille shot the…wait, I was in this scene, what am I talking about? Sorry, I just had a mental blah. The scene that we shot in the back of the truck, it was such a sick scene. And it was hot in that truck, and also, for the record, Mireille does every one of her stunts, every single one. She’s amazing.

Is there a moment from this season that stuck with you?

YMP: I think what will stick with me from the show is all the connections with the cast and crew. Especially compared to season one, season two was a lot more of a community for me personally. I was there a lot more so I got to know everyone better. But that’s something that will always stay with me.

ECM: Yeah, I’d like to second that. And something that I’ll also take away is working with Mireille, working with Yasmin, and working with Eva (Husson), our director in the first block.