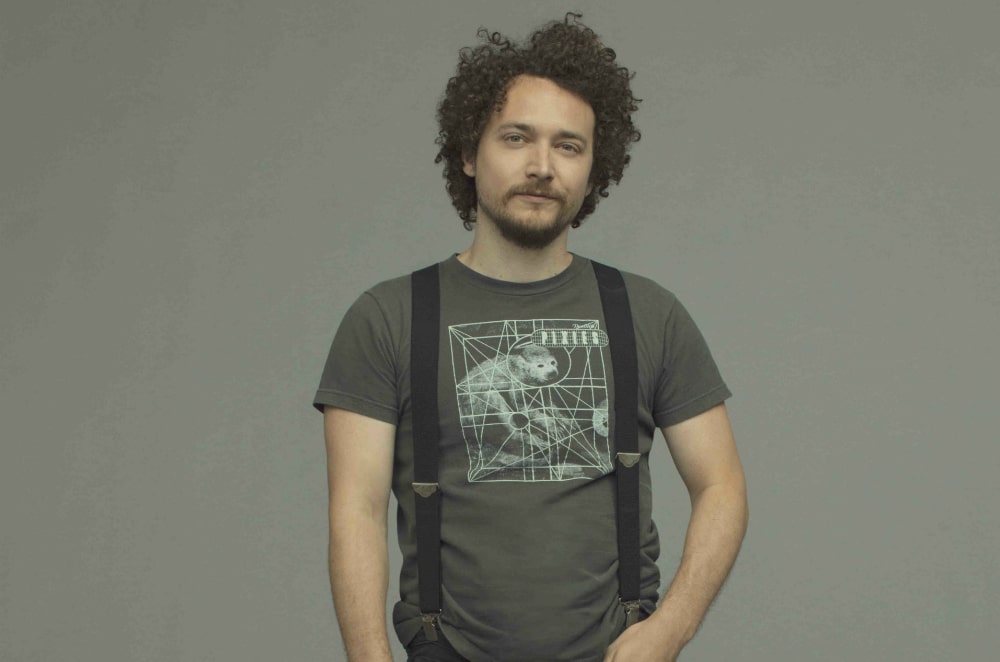 Actor-producer-cinematographer-director David H. Holmes seems like a real stand-up guy, to the extent that we end our exclusive interview by chatting about Mindhunter, Toronto (he detects a trace of a Canadian accent in my voice), and makes sure to mention how much he enjoys Letterkenny (which is now also a Hulu original). Of course we’re discussing his Hulu series, the really enjoyable High Fidelity, which gender swaps its lead Rob, as played in the series by producer and powerhouse actress Zoë Kravitz. Working at the record store with Rob is David H. Holmes, who, as Simon, later receives his own bottle episode. “I really like that term”, says Holmes, speaking to Brief Take by phone from New York City, where he is based from and where the series is based as well.

The following is a condensed and edited phone interview with the incredibly kind David H. Holmes of High Fidelity. *This interview was originally published on February 13*

Brief Take: You were so great in this show, and I realized afterward that you were in the first scene in Mindhunter. What is it about this series that is such a game changer for you?

David H. Holmes: Practically speaking, the reason that it’s a game changer is that it’s a lead role, it’s number three on the call sheet kind of thing. And I will just say, speaking on the Mindhunter thing, it’s kind of nice to be out of playing, at least for this role, either a scumbag or a drug addict or a drug dealer or psychopath, which I was playing for many years. I liked it, it was fun to play, but this was pretty fun.

BT: How awesome will it be that an audience will really adore and relate to this show?

DHH: It’s great to hear that. I mean that’s what I’ve always appreciated in film and tv. Obviously when you aren’t pandered to as an audience, you’re kind of allowed to make up your own mind about people, and I always like watching stuff  which you could even change your mind over how you feel about a person or a situation mid-scene, or mid-movie or mid-whatever it is. There’s always this cookie-cutter kind of filmic language, that okay, we know this is about to happen and that’s the way they normally tell stories, and I like when films and tv break that mould, that you kind of lose your footing a little bit and you’re still interested. So to hear that you have that reaction, I think it’s great. I think that film and tv sometimes can benefit from folk music, especially with a property like this one that has been a movie already and a book and there was the play. I think that it’s interesting, it’s kind of like a folk song. There are certain songs that hundreds of people have covered over the years, and they all put their different spin on the exact same kind of thing and sometimes it will give you a totally different feeling, and I think that there is a vitality to that. I think that it would be really interesting to see certain types of movies and tv shows told by other creators. 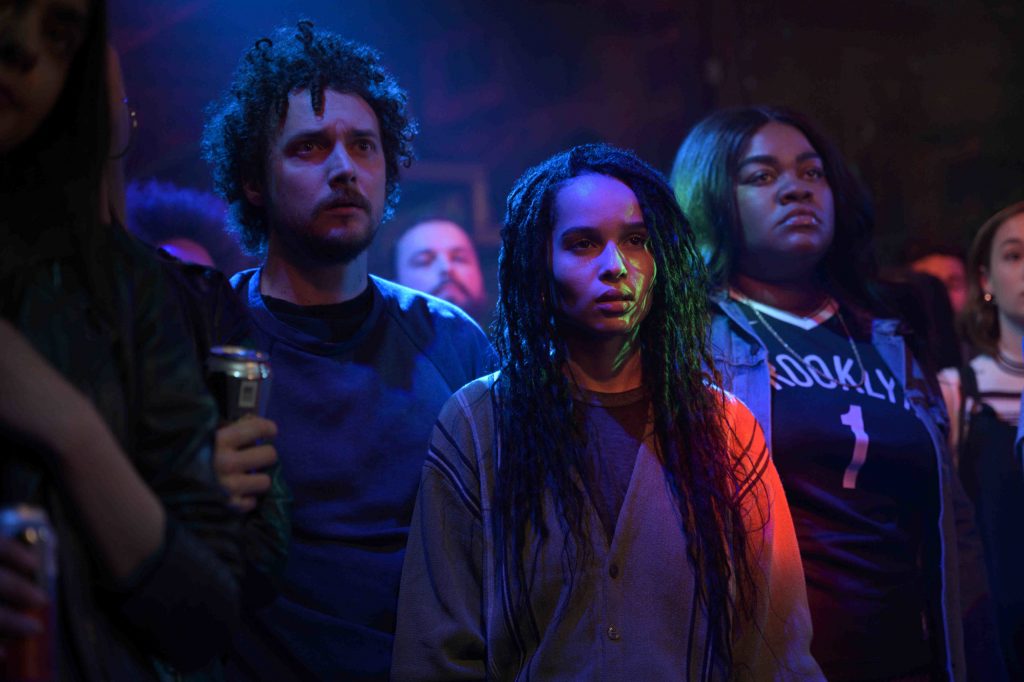 BT: What was your entry point to crafting the character of Simon?

DHH: Well I started with the script and talking with the writers about what they based it on and where they saw this guy coming from. I really kind of trusted Zoë and I trusted their casting of me to play jazz with it, and I kind of found it as I went. I didn’t have this whole symposium on trying to figure out the thing before I got to set, I got there and we started rolling and we started falling into our relationships, which are what kind of define how people act as how they act to other people. Yeah! We made it up as we went along.

BT: What did you like most about working with Zoë?

DHH: She’s an incredibly genuine person and not really what you would expect. All of the things that you would imagine when you see someone as beautiful as she is and as famous as she is don’t really apply. She’s incredibly down-to-earth,  really funny, weird, we come from a very similar background in terms of what we thought about and what we listened to in high school at kind of a similar age. Once we realized that, we realized that we had a similar creative outlook on things, and then everything fell in, like we had known each other for years. 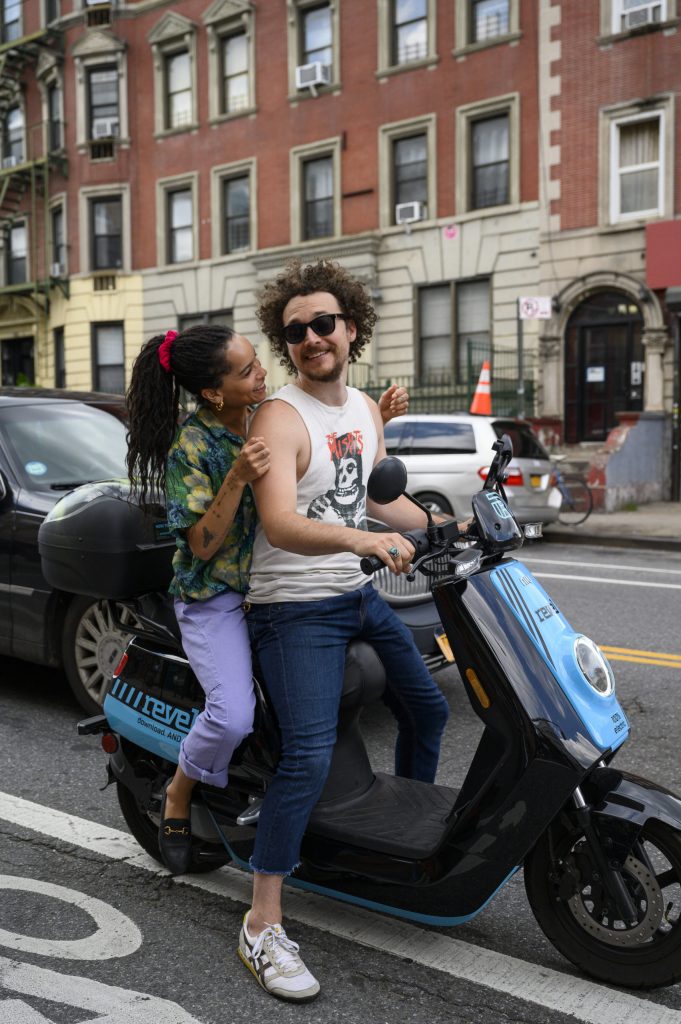 BT: Had you ever done a show like this that involved breaking the fourth wall?

DHH: No, I haven’t and I was a little nervous. I was trying to take lessons from watching her and I watched the movie, because I didn’t really worry that the movie was going to affect my performance because it’s such a different thing. I really wanted to understand the tone of why you need to talk to the camera, and philosophically, what is it? Are you talking to yourself, is it like the narcissism thing in which you need to explain your motivations in a moment to an unseen audience? I don’t know, at the end of the day, I took it no differently than your classroom exercise monologue. You have to talk to air half the time when you’re studying and training as an actor, so it wasn’t something totally foreign to me. You try to be as truthful as possible and serve the story.

BT: Did you improvise a lot in it? And what do you think of the final product versus when you were making it?

DHH: Well to answer your first question, it’s not like we went off script. It wasn’t like an Adam McKay thing. We did a lot of improv, but we had a lot of latitude to fill in and to make it as real as possible. If we wanted to throw in an ad lib here or there, it worked because they trusted us and we trusted them and so we took the time. We never really had to do too many takes of anything because we would rehearse it and we would get into such a rhythm, that we would really only need a few takes to get the meat of the scene and what they were looking for.

I didn’t know how I would react when I saw it, with everything cut together, but I was very surprised. I mean I’m a fan of the show. They sent me all the episodes and I watched and I was like: “I would have watched this show”. [laughs] I was actually getting choked up at things in which I read the scene with them, so I know what’s going to happen, and yet I was engaged, which was surprising to me. I’m very happy with the outcome. 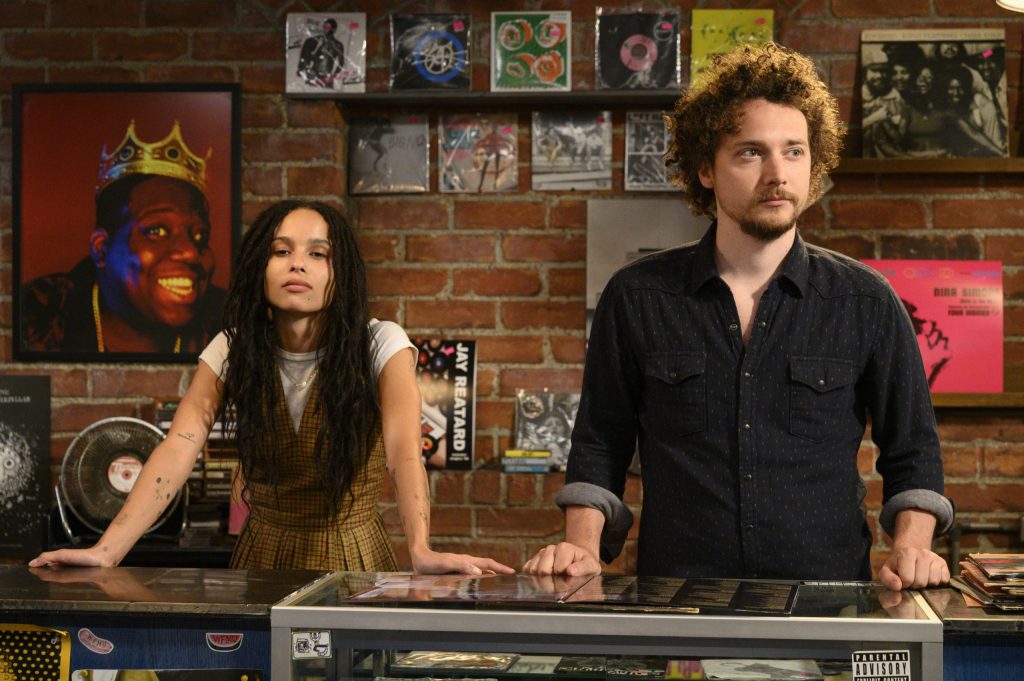 BT: How much are you driven by music in your own life?

BT: Simon’s Top 5 in particular has a lot of surprising twists within that one episode.

DHH: Well, look, we all make mistakes and hindsight is 20/20 and all that. I try not to judge any person I play or anything like that, but going through someone’s phone and letting hatred build up instead of communicating, at the end of the day, it’s one of people’s biggest foibles is not communicating. The moment that you see something which you’re not sure of, you say, “Hey, what’s going on here? we gotta figure this out”, rather than letting it fester and boil, but that doesn’t create great art. [chuckles] Great art comes from the fact that we are all fucked up and we all don’t communicate properly, usually. We’re trying to figure out. We don’t have our own philosophy on how to love and we’re figuring out that we have to find our own philosophy on how to love, and usually, it gets messy because we are scared. That was what most of that episode was about and the show certainly traffics in that type of theme as well. 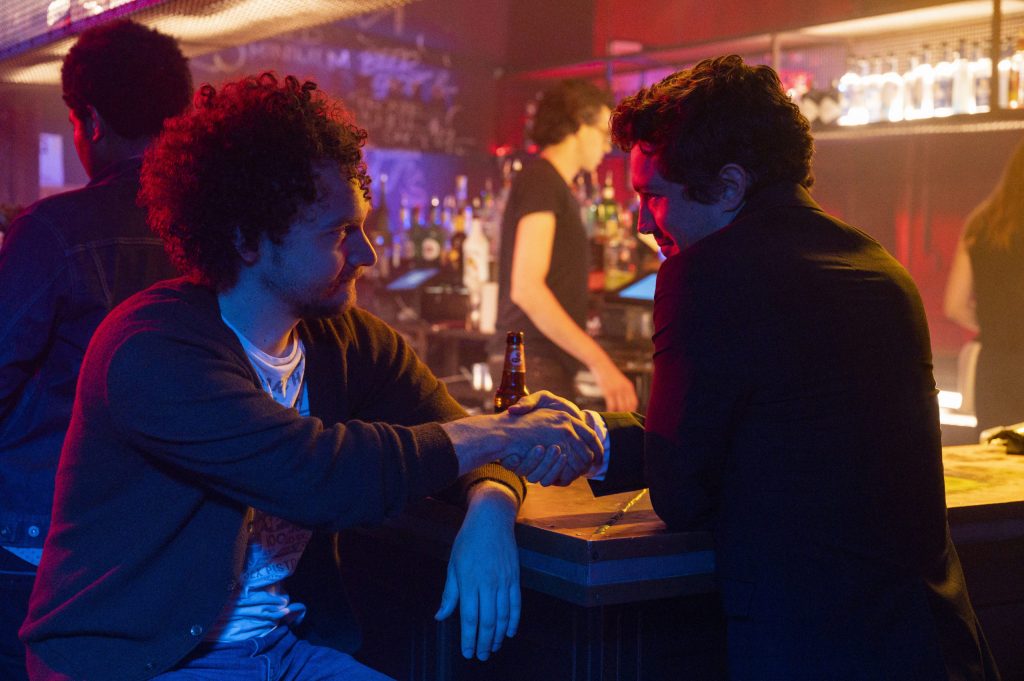 DHH: Well I’m a big Sopranos fan. That show changed my whole idea of what tv is and I think that it’s just a gorgeous show. I really like Fargo, the kind of anthology that Fargo is doing now. That third season has blown me away, I’ve watched it a few times. And The Leftovers always was wonderful. But mostly the work of John Cassavetes is kind of my bedrock as an artist and kind of where I tend to, not from where I judge everything, but I look back at this benchmark for what I care about when I want to see a film.

BT: Do you feel like your history as a sort of unknown actor informs your journey? 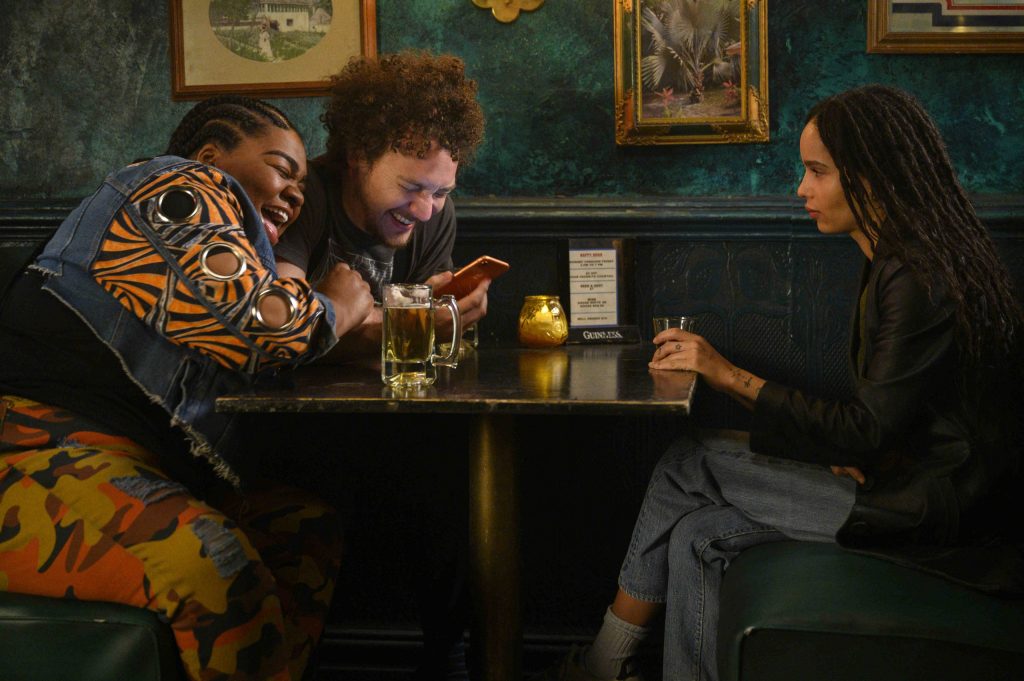 BT: What have been some of the projects that have made a difference for you?

DHH: Well, Mindhunter for sure. Just because that was such an affecting show and I got to work with Fincher. That was a highlight. It was unbelievable, and it was a crazy scene and it was such a bonkers thing to have to do, and that stuck with me for a while.

BT: What did co-directing the documentary Starring Austin Pendleton represent for you and what his mentorship meant as well?

DHH: Very early on, I experience such a great oral history of acting and getting to talk to a lot of different actors that were at varying degrees, but obviously all of them very successful. And to find the common thread was our shared mentor in Austin, and to hear their own struggles and their own difficulties with the business and with the work and with doing a small play here or a big film there and seeing that reflected in my kind of mentorship through Austin. It put everything into perspective very early on for me, which I think is a very good lesson to learn and not many people get the kind of oral history that I got when making this film. I made it with a friend of mine, Gene Gallerano, and we were both young actors, both very inspired by the man. Austin continues to inspire me when it comes to thinking about the longevity of a career and understanding where it’s important to put your energy, especially now, especially now that it has taken me so many years to get to this point. I look back on everything that he has said and taught me as this tender lesson in a business that can leave you very vulnerable. 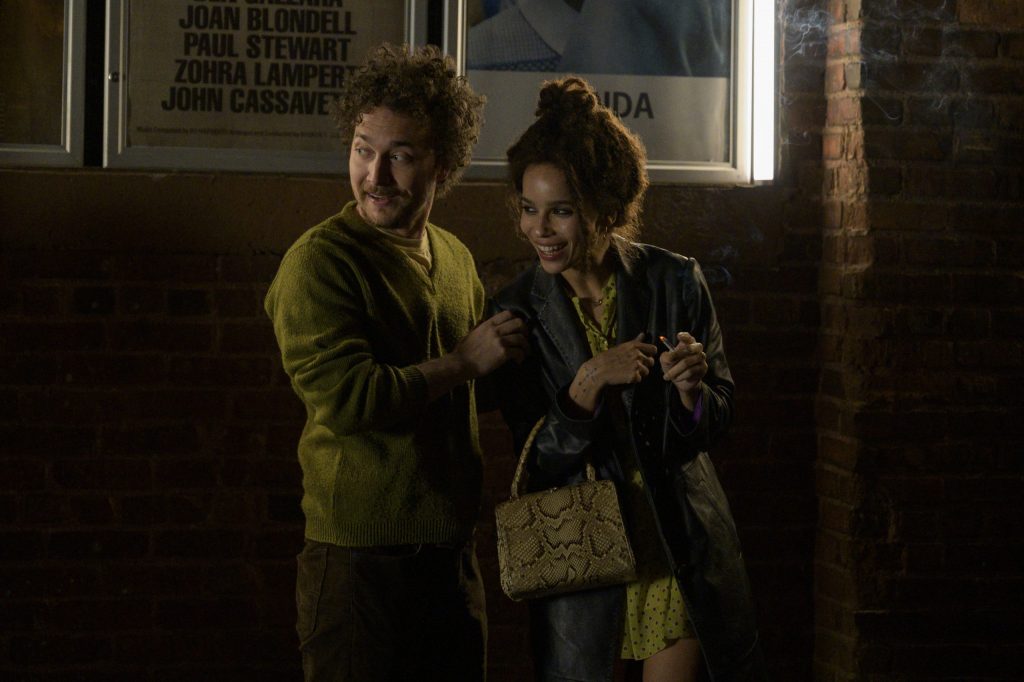 BT: One of the first results when researching you online is a LinkedIn page, which I rarely see for performers.

DHH: Thanks for reminding me. I should take that down. [laughs]

BT: Is there something from this experience that you would put back into your creative outlet?

DHH: Oh, one hundred per cent. Look, this is one of those breaks which you look for and you wait for. That is the result of years of hard work, and hopefully it puts you in a position to work on projects on which you really want and you can make a living on. Yeah, I’ll take the experience of the fact of it. Yeah!