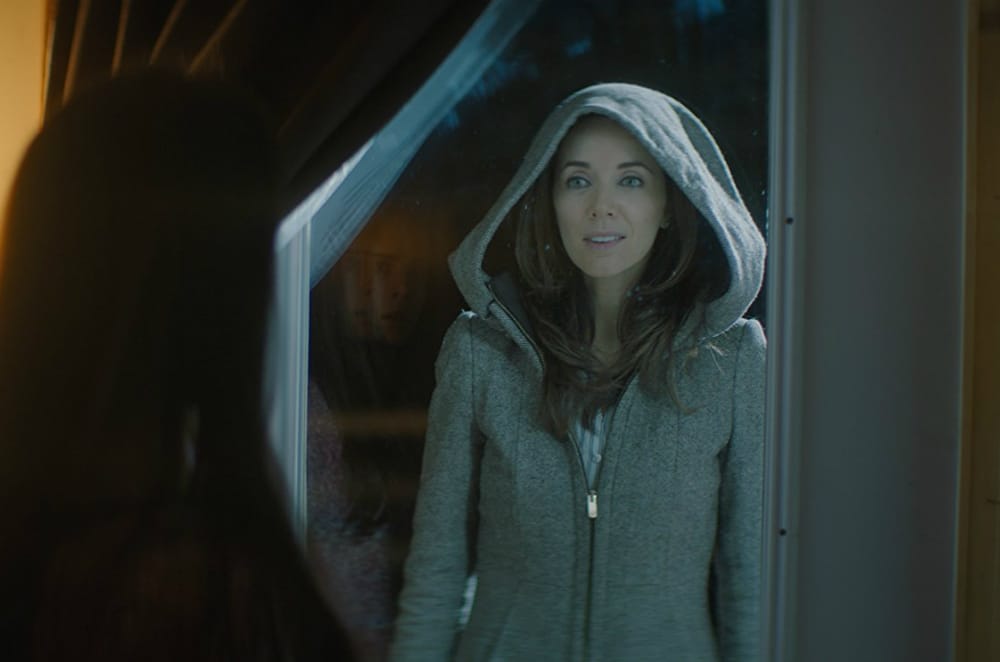 People across Canada passionately adore Michelle Morgan. When we casually mentioned to a few friends and colleagues that we’d be interviewing the talented Vancouver-based actress, faces lit up and we were immediately bombarded with questions about the recently renewed CBC drama Heartland (in which Morgan stars). In her new film, Ice Blue, she plays a completely different character than her beloved Lou Fleming, portraying a loving (yet estranged) mother to 16 year old Arielle (rising star Sophia Lauchlin Hirt).

We spoke with Michelle Morgan on the phone recently and in our introspective conversation she talked about bringing her short film (which she directed, co-wrote, produced and stars in) to Cannes, working with Ice Blue director Sandi Somers and what’s coming up next for her on Heartland.

Brief Take: Congratulations on having Mi Madre, My Father play during the Short Film Corner at Cannes! Will be you be heading off to Cannes soon?

Michelle Morgan: Yes, thank you! I’m getting ready this week to head out and then leaving on Saturday. My husband is coming with me so it’ll be a little getaway for us as well. It’s a short film that I directed and it’s based on a true story. It stars Lina Renna, a young Vancouver actress, myself, Robert Moloney and Stephen Amell from Arrow, and Heartland fans will know him as Nick Harwell.

BT: You’re such an inspiration. You write, produce, direct and act. What do you like best about all of those crafts?

MM: Oh man, well I love the freedom of acting, and that’s my main art form and have trained the most in and am strongest at. But I’m enjoying the challenge of learning more about writing and directing.I’m at a point now where I’ve been acting professionally for a number of years but I am still learning about it. As an actor, I don’t think you ever feel like you’ve just arrived or know it all. You’re always learning. It’s really fun to be challenging myself with new art forms such as directing and writing. I just spent a couple weeks in Los Angeles shadowing a director friend of mine who is on a show there starring Ryan Phillippe called Shooter. I learned a lot on Shooter. It’s pretty neat because it’s kind of the same. On Heartland we’re dealing with horses and there they’re dealing with people running around shooting guns at each other but the logistics and the organization of it and the preparation for it is very similar. You have your art department meetings and your stunt meetings and your logistics meetings, and then you get to set and you have a focus on the story. It’s heartening to know that I can go to different projects and, as far as television goes, they all come together in a similar way.

BT: Let’s talk about Ice Blue. It’s playing in select Canadian theatres now and it also played as part of the Calgary International Film Festival in September. What sort of reactions have you received from audience members?

MM: To be honest, I don’t think too many people have yet to see it. They are seeing it now though. At the Calgary Film Festival it reached a small audience in Calgary and that reception was fantastic. A lot of the Heartland cast and crew and producers came out to see it and really enjoyed it and we got an amazing reception there. People are just starting to see it now in theatres and I’m looking forward to hearing from my fans and my followers on social media what they think of it. I hope people message me and let me know what they think because I want to hear what they think of it. I think it’s a beautiful film and I was so happy to have met and to have worked with Sandi Somers, the director of this film.

BT: What did you like best about working with Sandi?

MM: She’s been around a long time and she knows what she’s doing. It was wonderful to have worked with her. She has such interesting ideas about how she develops characters and I would happily work with her again. She’s got a great energy too. She’s very calm, which comes from years of doing this. She had a really strong vision. We had a long talk before I came out to do the part and I realized then that I really liked her and wanted to work with her and that I also trusted her. I think there has to be an element of trust when you’re presenting sensitive topics like domestic violence. I wanted to make sure that I trusted her vision and that she was going to deal with that topic in a way that I was going to be okay with. It turned out to be absolutely true that she was sensitive to it.

BT: The role goes hand in hand with your work with the Brenda Strafford Society for Prevention of Domestic Violence in Calgary and HomeFront.

MM: That’s right. I’ve been advocating for victims of domestic violence for many years and it’s a cause that’s really close to my heart. I wanted to make sure we weren’t glorifying domestic violence or saying that it was okay or normalizing it. The film isn’t about that though. It’s about trauma and about how families deal with trauma. You can try to bury things but they always resurface.

BT: The film is centred on a mother-daughter story. With Mother’s Day coming up, what life lessons do you try to instill in your children?

MM: I’m really trying to teach my kids, and my daughter in particular because she’s seven, how to become accountable for their actions. I think that’s a really important life lesson and it’s tough because as a Mom, there’s the natural instinct to try to make everything okay and clean up after your kids. There’s an instinct to make everything okay all the time. I want to let her sit with her mistakes a little so she can learn how to do that as an adult.

BT: Are there any actors or directors that you still want to work with in your career?

MM: Oh none of them. I’ve already worked with everyone that I’ve wanted to work with. [laughs] Oh God, that’s an endless list. I love Guillermo del Toro and of course a lot of the greats that are living right now like Wes Anderson. There are also so many talented Canadian directors that I still want to work with. It’s a never ending list.

BT: Congratulations on Heartland just getting renewed for a twelfth season! I know last season you were busy with other projects and couldn’t appear on screen as much. Will we be seeing more of Lou this coming season?

MM: Oh I’m going to be on it for sure. I find it funny that fans are “Where’s Lou?”. Lou isn’t going anywhere. I don’t know the extent of which I’ll be on it, but I’ll be there for sure. I am busy with other projects but I love Heartland and I’m going to be there. Fans will be happy.

Ice Blue is currently playing in select Landmark theatres across Canada and will be opening in New Westminster, BC (Landmark theatre) on Friday May 11th