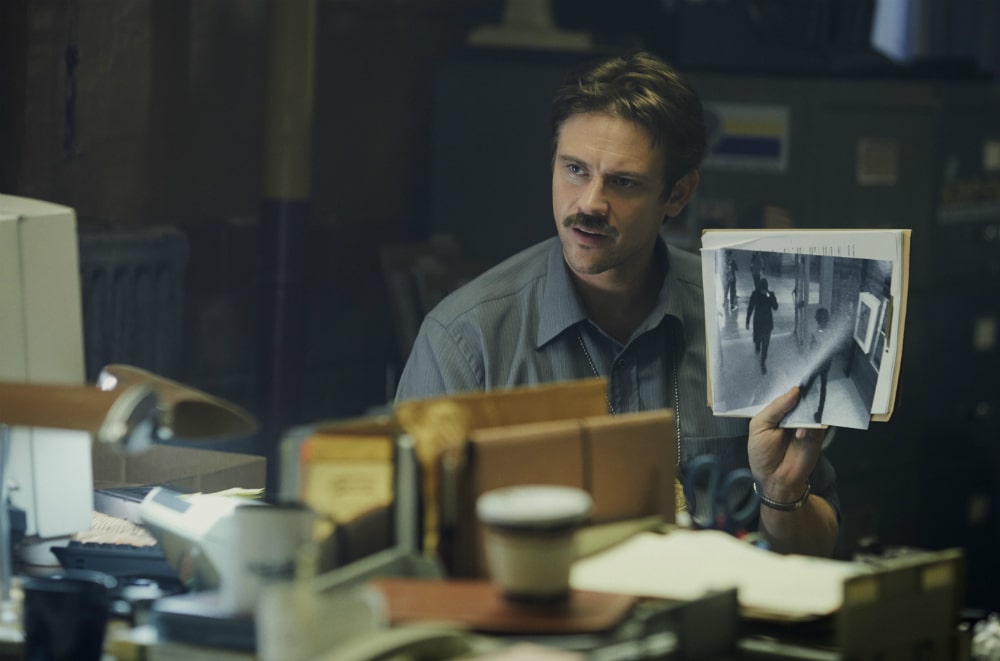 There are so many twists in the Netflix film In the Shadow of the Moon, that I’d rather not reveal too much about it so as not to spoil its many surprises. Here’s the official synopsis so you have a brief overview of the genre-bending film: In 1988, Philadelphia police officer Thomas Lockhart (Boyd Holbrook), hungry to become a detective, begins tracking a serial killer who mysteriously resurfaces every nine years. But when the killer’s crimes begin to defy all scientific explanation, Locke’s obsession with finding the truth threatens to destroy his career, his family, and possibly his sanity.

Shot in Toronto and directed by critically acclaimed filmmaker Jim Mickle (Cold in July, Hap and Leonard), In the Shadow of the Moon is unlike anything you’ve ever seen before. Recently, I had the chance to sit down with Mickle and his leading man Boyd Holbrook (Logan, Gone Girl) to chat about the feature. The following is a condensed and edited version of our conversation.

Brief Take: What was it like filming this movie here in Toronto?

Boyd Holbrook: I love Toronto. We’d both been in New York for a long time so it’s like a better version of that but without the chaos.

Jim Mickle: Yeah. It’s a fun place to make a movie – good crew, good infrastructure. It’s hard, obviously, to make a movie, so it’s nice to be somewhere that’s used to it and ready to absorb it.

BT: And Jim, this is your biggest budget movie to date.

JM: Yeah! I prepped a movie that was bigger that never happened. [laughs] It folded right before. So in a weird way I got practice. But yes, that was in Atlanta, which is a pain in the butt to shoot in, so this is a nice respite from that.

BT: What did you like best about working with each other?

BH: Jim is very tender. He has a great kindness to everyone and that makes it an incredible set to work on, which is very relaxed in a way that keeps everything focused. It’s not erratic, it’s not a chaotic set, it’s a very controlled environment. When you’ve got people running around in between takes, it’s just super hard to concentrate when you’re an actor, and that wasn’t the case on this movie.

JM: And I like Boyd as a no-bullshit actor. Fortunately I’ve been lucky enough for this not to be the case, but people who are out there to be famous or to look good or sparkle, but Boyd has a natural leading man charm, which is so rare to find, but he’s so interested in doing the best work and getting to the bottom of what the character is – whether it’s good for him as a person or not, and obviously he did that a lot with this because his character goes through a lot of changes. He was game to keep going, even if the character got dark, he went along with it, and it’s rare to find that. 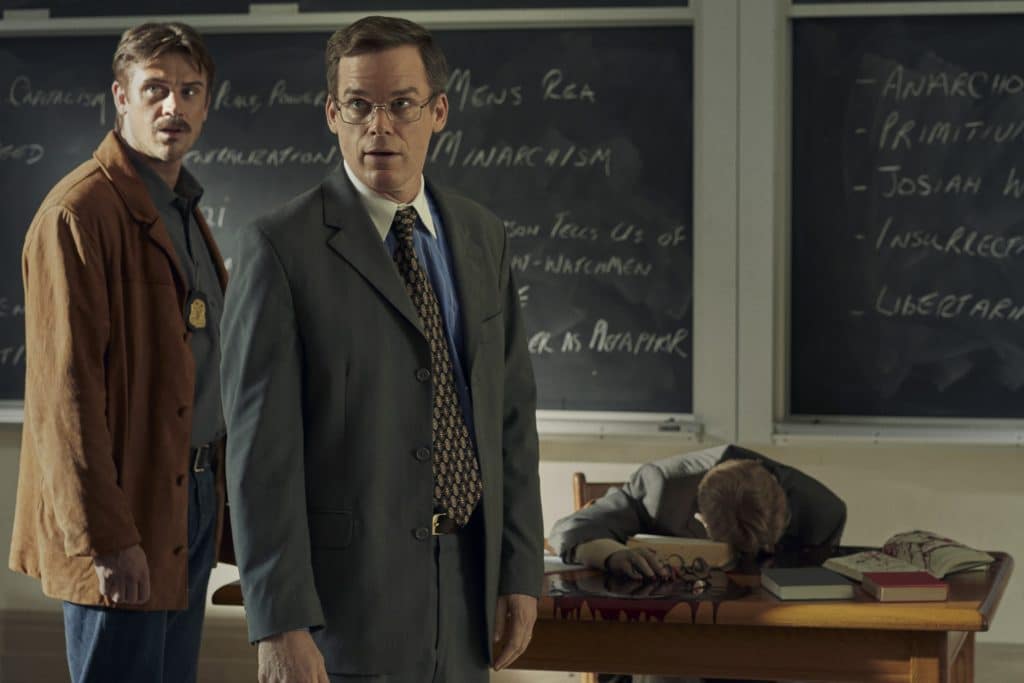 JM: I had just come from television, as had David. He did the first episode of Sabrina and Riverdale, so he came from television and I had just done three seasons of a television show called Hap and Leonard, it’s a smaller, kind of rural show, and I wanted to do something different. I think coming from television, I really wanted something cinematic that felt big. So we made a conscious effort to get these old Panavision anamorphic lenses and slapped them on, the same ones they used in the ’80s and ’90s thrillers, and kind of go back to what gave those movies that distinctive look. I think a lot of movies feel like television shows now and vice versa, so we kind of separated that. We wanted a very deliberate look for the film which can be very hard. It can be hard sometimes to, not box an actor in, but sometimes it’s like “look, if we’re going to make this thing, have this pop and scale to it, then we’re going to have to change some things” and need actors to take that and turn that into a performance and not feel restricted.

JM: Exactly. Not say “well that wall is better than this wall” or “but I want to sit on this couch!”.

BH: “Why would my character do that?” [laughs]

JM: I’ve had that! Sam Shepard did that to me! His last scene, when he kills his son, we were shooting at a place that had a stage. To have Sam on a stage, and Michael’s character is sitting in the front row, it just felt like such a meta thing. I remember being like “you come out here and you’re going to kill your son” and he was like “why? because it’s a stage? why would my character do that?” and I was like “Oh my god! please someone help me”, and even Michael was like “what if I pushed you there? the character” and he wouldn’t do it. So Boyd does well.

BH: I would go with Sam. But yeah, I was so excited to get involved with this. I knew watching Cold in July and finding out the budget on that was around two million bucks, I was like “dang! that looks like a ten million film”, and seeing what Jim could do with this on this scale and the scope and story. Then, for me, it’s completely engaging to crack the character and to track the character throughout his arc because it’s not something I’ll ever get the opportunity to do again. I wanted to put that much care and focus into it. 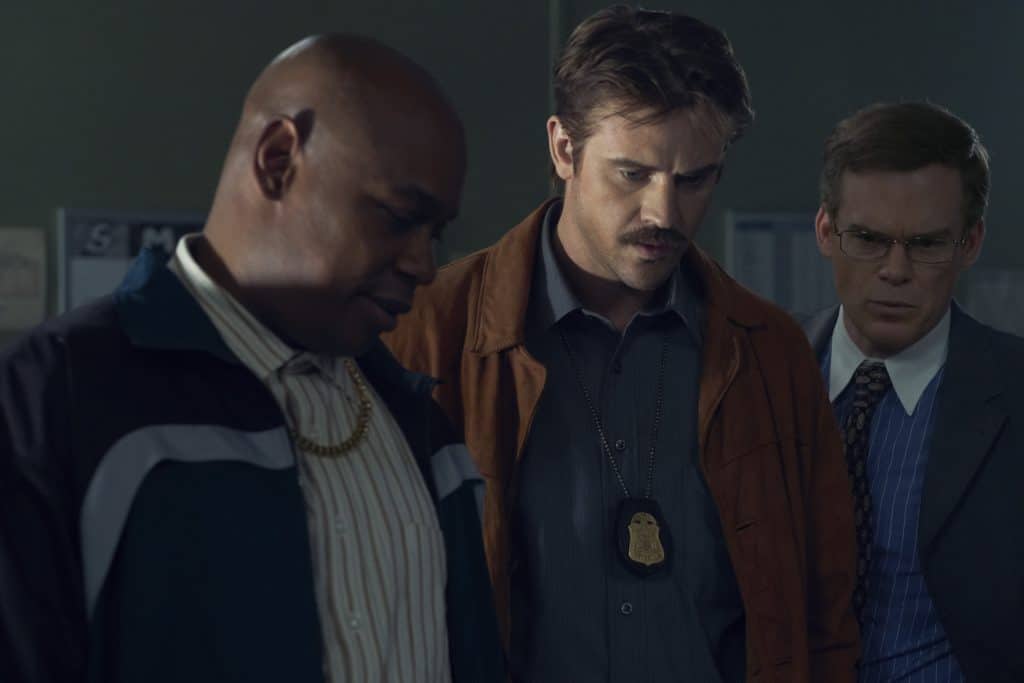 BT: Boyd, your scenes with Bokeem Woodbine serve as the heart of the film, in a way. There’s so much conveyed in those scenes about each character and their history together. Had you worked with him before?

BH: I hadn’t worked with him before but there was one little nugget that we kind of drew off of, that Greg (Weidman) and Geoff (Tock) put in the script. Him listening to a sports game, and it didn’t really go anywhere in the script, but I was thinking “let’s flesh this out a bit” and it turned into Maddox, Bokeem’s character, having a gambling problem. It gave us something to kind of riff off of and to keep alive in our scenes and also a thread throughout our scenes. It bonded us together, so when our characters break apart, for lack of a better description to save some stuff, it makes it that much stronger.

BT: Another actor that I thought was astounding in this film is Cleopatra Coleman. Can you talk a little about working with her?

BH: She is so striking and such a great actor and she played it to a tee. It required this really interesting touch and [to Jim] I know you looked at so many people, I’m sure a lot of big names came across your desk who you didn’t go with because Cleo just won the part. And that’s a fucking hard thing to do, man – auditioning is a weird thing to do anyway.

JM: Yeah, she’s great, and she’s also a sci-fi geek. Sometimes when you have a great actor, you have to explain the sci-fi elements, but she gets the character of it and everything she needs to for her performance, but then she can also step back and as a sci-fi nerd, figure out how it fits into the sci-fi elements of other films and genres and can go on about that stuff and get passionate about it, so that’s always fun. 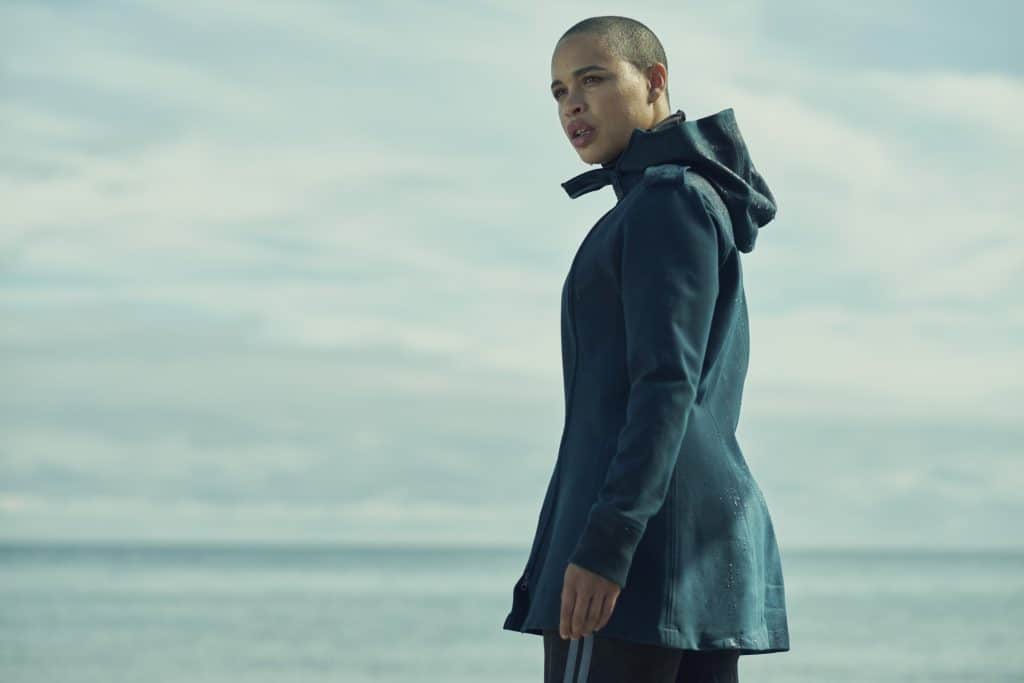 BT: Speaking of influences, there’s elements of The Terminator in there and David Fincher’s work. Jim, what were some of your other influences, and Boyd, did you speak to officers when crafting your character to get the physicality and manner of speaking correct?

BH: You know I modelled the character from working with a voice coach where we found a heating and cooling guy, he was on tape, and I really took on his voice. There’s a clipped phrasing to it that I just naturally went to, and I also went off the gut and felt my way in that direction. When you’re in a dialect or accent, you know when you’re out, you know with your vowels when you’re out, and that was a really good home base for me. I would always recite that before the scenes, when I did ADR, it was just a good home base.

JM: For me it was a lot of ’80s and ’90s crime thrillers. So we went back, cinematography-wise, and looked at a lot of Ridley Scott ’80s stuff – obviously Blade Runner and Black Rain, specifically, has this great look. Jan de Bont shot a lot of his films and went on to shoot Basic Instinct. He has this distinct style. Adrian Lyne too. But then also, tonally, a lot of Korean thrillers that I think are great at being unpredictable and intense, but then jump tones really well and never leave you comfortable where you are. I love that in general but it also influenced how the movie moved, I guess.

BT: As artists and craftsmen, what do you hope to pass on to the next generation with your art?

BH: Yeah. I was inspired by a lot of artists. I saw a lot of performers in my teenage years and they had so much life and they were so engaged with their lives, and that was really inspiring. I don’t want to sit back and put the cruise control on life, so hopefully I can inspire other people to do the same.

JM: I think, for me, it’s be yourself and find your voice, whatever that is. I was so inspired by different films and different filmmakers growing up and it’s always so exciting. When you set out, you set out to do your own things and things that work for yourself and things that speak to whatever you’re about, and I think that’s what makes movies individual and storytelling individual and personal. So it’s always exciting to keep refining that yourself.

BH: Oh man, yeah. B.J. is a really talented writer and a pretty accomplished director. He came up with a really provocative show that him and I and Jon Bernthal did about gun control. I think it’s going to make people pay attention a little bit.

JM: For me, I’m going to see Jeff tonight and tomorrow. I’ve been a huge fan of his stuff, and specifically Sweet Tooth for a long time. So we shot a pilot – it was amazing to get to adapt his stuff, that was so fun, and to bring him into the process. We shot a super cool pilot – very cool, very unexpected, very different than stuff I’ve played with before, and we’ll hopefully find out in the coming few days what the fate of it will be.

In the Shadow of the Moon is currently streaming on Netflix 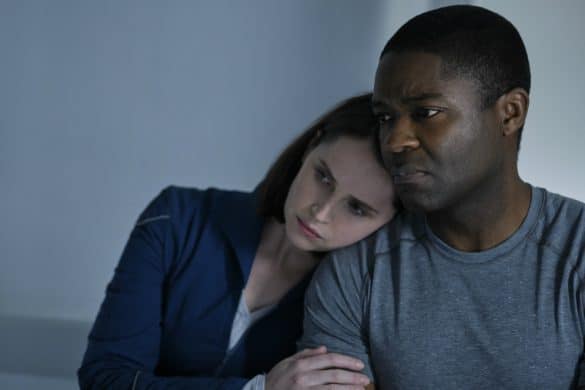 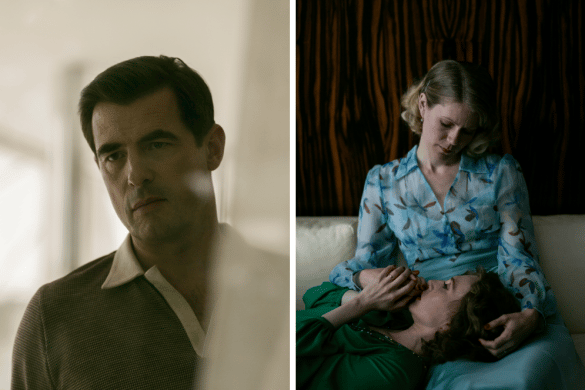