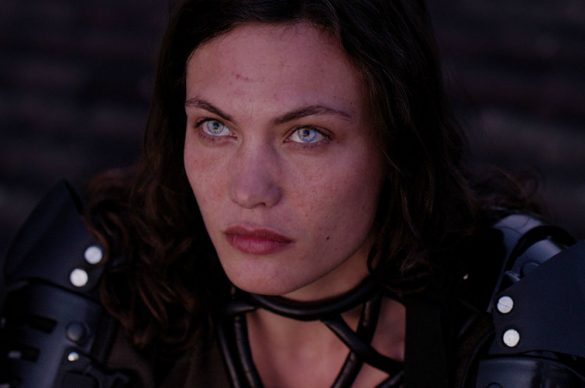 Talking to a director team is always a highlight (Caroline Poggi and Jonathan Vinel in this case), but to do so with their film’s lead actress also present(Aomi Muyock), along with a translator at the final day of RBC House at TIFF is a particularly interesting scenario. The amount of discussion that resulted was fantastic, as their film Jessica Forever represents a certain type of experience. In our lively and lengthy discussion, the creatives stressed the importance of the audience bringing their own meaning to this Platform title. As such, it’s a really intelligent film, and the director duo have created a marvellous dystopia in their first feature, with Muyock delivering a bravura performance as the titular Jessica.

The following is a condensed and edited version of our intimate interview, mainly in translation from French.

Brief Take: What do you want an audience to get out of Jessica Forever?

Jonathan Vinel: What we want to do with the film is create a space with the audience and allow them to navigate the world, to think about what’s happening, to connect with their own experience, because we don’t want to handhold the audience and tell them what to think.

Caroline Poggi: Like Jonathan was saying, we want to create a space for our audience that allows reflection, and it’s not about whether you like or don’t like the movie, it’s really about taking time to think and reflect.

BT: How did you know you found your Jessica in Aomi?

CP: The moment that we saw Aomi, we knew she was our person. For the film to work, we knew that we had to find a very strong Jessica because Jessica is very present in the film, but she’s also very absent. So it was very important that even though you don’t see her all the time, you always must feel her. So we needed to feel the way the boys were going to feel about her, and so as directors it was really a “love at first sight” thing. We knew when she walked in the room, we had this instinct, this feeling, that we could see the scenes unfold. It’s almost like there’s a magic breeze or an aura, or something about her that would make us know.

BT: Aomi, what came naturally to you about portraying Jessica?

Aomi Muyock: First of all, I don’t really see myself as a very strong woman, so when they wanted me for the role I was surprised. I think she’s very “love”, and wants to protect them like a child, and I did feel more attached to the part of Jessica.

BT: How do you want an audience to watch your movie?

CP: We have to give ourselves permission to get lost, to see something that doesn’t fit with our expectations, and to experience a film with no judgment and to be okay with seeking and with not understanding every moment, and to try and find that understanding. We’re always exploring different ways of telling stories, so what’s really important is not to understand everything and to be okay with that. I think that we’re looking for people to experience a more personal cinematic experience and that they’re not bringing a ton of expectations and baggage, but they’re going on a personal journey. I, myself, love the feeling when a film washes over me, and it takes me back to childhood, and it evokes feelings. We’re trying to generate something from the gut, that you feel in your stomach and in your soul.

Brief Take: Do you think that we are in end times?

Caroline Poggi: It’s harder, almost impossible these days for there to be an apocalypse, because things are so locked in. We’re talking about End of Days. If we look back, I think that we’ve been missing a consciousness or self-reflection. So I think what people need to do is reconnect with that notion of reflection and just think a little bit more. I don’t think that these revelations or apocalypse would be the end of the world, it’s more of a becoming aware.

BT: What do you think your film has to say about an increasingly uncertain future?

CP: More increasingly people are aware of this prescribed path that society expects from us, and they’re becoming kind of aware of this desire to connect — to connect with the world, to connect with nature, to connect with feelings and emotions, and to develop more of a reflection, instead of accepting the world as it was created for us. And thinking for yourself, “what is life? What is living for me?”. Maybe this is a part of the generation I’m from, but I feel like we’re having a kind of global awakening against society, and I think that’s why we’re seeing more and more revolution, so to speak, or even just becoming more increasingly aware of the environment. And we’re waking up. And I think that this is happening more and more in the future, although maybe I’m being overly optimistic.

After closing out the Toronto International Film Festival’s Platform program, Jessica Forever is next set to air on Shudder

Win advance screening passes to THE HATE U GIVE!