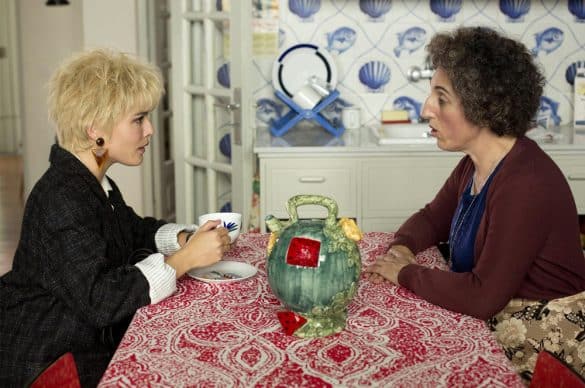 Pedro Almodóvar’s film Julieta arrived on Blu-ray March 21st. This is maybe the best way to enjoy this masterwork that is based on a series of Alice Munro short stories (yes, honestly). The film invites multiple viewings and is rife for interpretation. This is much of what we did when we sat down with two of the actresses from the film: the stunning Adriana Ugarte, who plays the young Julieta, a first-time star of an Almodóvar film, and Rossy de Palma, the veteran, who severely downplays her appearance in the film as Marian. The following is an edited version of our conversation from TIFF 2016.

Brief Take: Rossy, do you trust Pedro to the point in which you’ll play any role that he asks?

Rossy de Palma: I abandon totally to him and say, “what do you want?”, and I’ll let him be free and choose. Because my work with him is comfortable, with a lot of complexity and very familiar. He’s very funny.

BT: Adriana, this is your first time working with Pedro.

Adriana Ugarte: Yes, but I felt very comfortable with him, he looks after you all the time, he’s so very empathetic. But you feel at the same time like a hurricane inside, because you don’t want to disappoint and you’re insecure because you want him to be happy and proud to rely on you as an actress. I learned that if you are open and confident, then you can have a very close relationship with him and it’s fantastic. He’s very warm and easygoing and he’s like a Daddy.

RdP: He’s like a Mommy and a Daddy at the same time.

BT: I thought it was incredible because you don’t really look like Emma Suarez (who plays the older version of Julieta, the same character).

AU: Yes, but you don’t really miss one or the other actress because I felt that both was the same woman with the same essence.

RdJ: It’s amazing how it works, right? Because they don’t look like each other.

AU: We are very different.

BT: And neither of you look like you did in the film.

AU: Yes, but it’s not necessary and it’s incredible. It’s a marriage of Pedro.

BT: You don’t have to wear the wigs and the tacky clothes.

RdP: I loved the wig. But Marian was not glamorous at all.

AU: It’s very different, but you are transforming yourself and it’s a challenge and a funny, funny game.

RdP: It helps a lot to play at transformation to get away from yourself.

AU: I think that Julieta is sexy inside, she’s very pure and very natural and brave.

BT: And introspective, which is sometimes lacking.

AU: Yeah, not a lot of awareness, I think.

BT: And a character so obsessed with trying to recount the past.

AU: Yes, but maybe a little too late.

BT: My theory is that maybe her recollection of the past was just her take.

AU: You think maybe it was an invention?

BT: Not so much an invention but perhaps an embellishment?

AU: We always do that.

RdP: We try to transform our memories. When you go through traumatic things, you remember.

AU: You run it through the filter of your personality. You remember what you want to remember.

BT: I thought that she may have had a touch of madness.

RdP: It depends. She had been separated so long from her daughter…

BT: Something had happened with her daughter, to create that break.

BT: And in her story, there doesn’t seem to be anything that seems to cause that break.

RdP: But at the same time, she is not honest around her daughter. She doesn’t tell the real truth. But to protect her of course.

BT: But Xoan (her husband) isn’t honest with her either.

RdP: Only Marian is honest.

BT: Only women can’t get away with telling a lie. It’s fine for a man.

AU: Yeah, but she’s not responsible because she’s a mother. 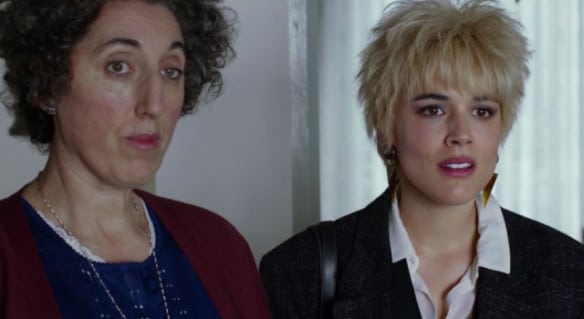 BT: And Pedro, you ladies know him far better than I ever will, but he’s a female-friendly director because he understands women.

BT: And men, I was actually talking about this very subject this morning, are more linear. They think towards a goal and women, they are more…

AU: They are more complex.

RdP: Anyway, they are simple. You are simple. They don’t make these castles in the air like we do.

AU: Sometimes. Sometimes they do!

RdP: Always they generalize. But it’s true, I have a son and I have a daughter, and I see the difference. The simplicity of the boys, and the girls how we make the machine much more complicated.

RdP: But here it seems that the relationship between mother and daughter is so deep and complex. Mothers sometimes try to castrate their daughters.

AU: And she abandoned her responsibilities like a mother and she implied, no? her daughter to be a mother, and it’s very terrible because a girl, twelve years old, cannot be a mother. It’s very hard to have this type of responsibility because you don’t have your own childhood.

AU: But also I think, in the character of Xoan, I see him as very complex, very difficult to understand.

RdP: It’s different parameters, because he gets the attitude to sleep with the other girl and he doesn’t feel like he’s betraying someone.

RdP: Lack of communications kills inside.

AU: And everything becomes garbage. 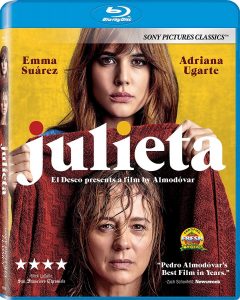