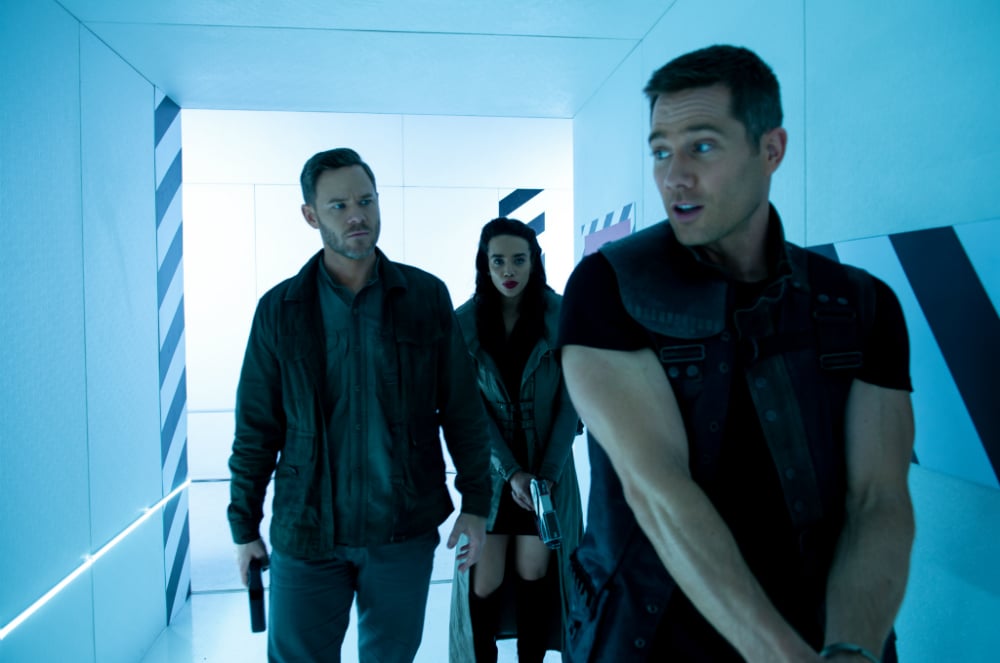 One muggy day last August, Brief Take, along with an exclusive team of journalists, had the opportunity to tour the set of the smash hit series Killjoys. Though we had done this last season as well, the chance to return to The Quad was too good to let go, especially as this time we had the chance to see the elaborate costumes and explore the sets used on the series. In fact, the costumes inspired us in one way, as you will soon discover below.

Perhaps the biggest highlight was a sort of “one last time” grouping of Team Awesome Force: Hannah John-Kamen, Luke Macfarlane and Aaron Ashmore. They had some surprising things to say and the following is a condensed and edited version of their presentation delivered to the media.

This series is based on the idea of found family. If you don’t know who you are, what does that mean to you in terms of creating a dynamic?

Luke Macfarlane: That’s a really interesting question and it’s something that I think about a lot in my personal life as well. As a gay man, what does it mean to have a child and what does it mean to create a family, totally in a different way. As for the show, I think as well that it really examines that idea, that you can kind of be whatever it is that you want to be and that’s a very positive message.

Hannah John-Kamen: The interesting thing as well is the “how”, and how it kind of will all happen. And that memory, that inner soul and how you have to remind other people and characters, the family and to bring them back. That’s really a fun element in the show and how it all happens as well. Laughing every day and also being a part of Team Awesome Force with these guys here, is something that has brought a smile to my soul and it’s been so incredible to work with, not only Aaron and Luke, but to work with Johnny and Davin and explore the amazing journey through which we have all gone.

LM: That’s true. We were filming yesterday and it occurred to me that I actually went to college with people for the same amount of time that I’ve gone with you guys to college.

LM: It’s been an undergraduate degree, maybe a Masters degree. And when you think of friends and you think of people in your life, it’s like how long it is from which comes these lifelong relationships. 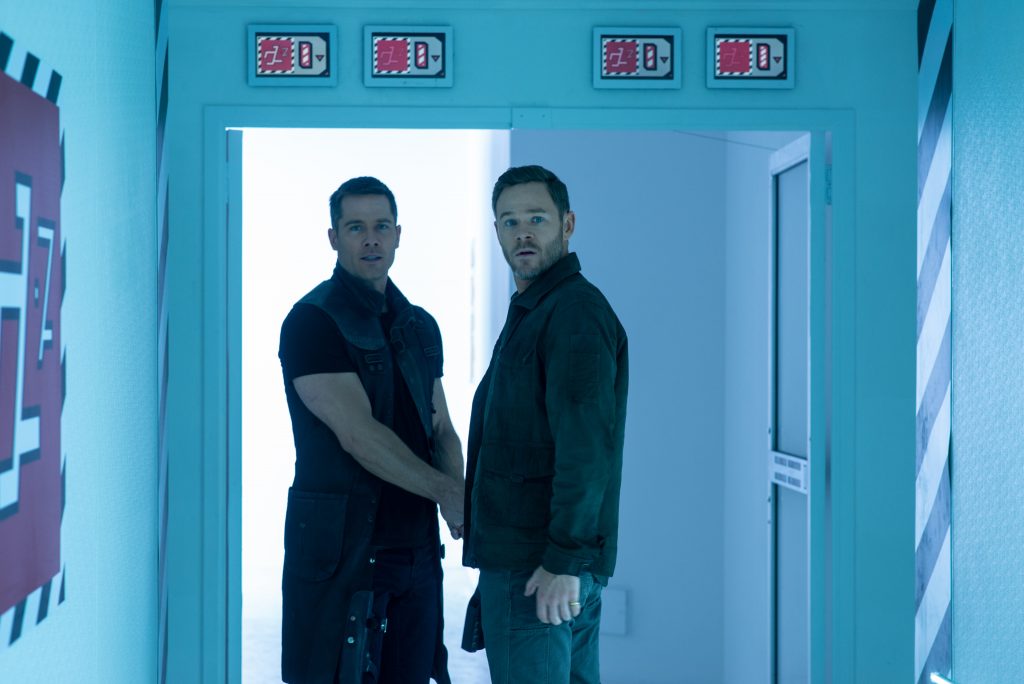 AA: I spent more time with you guys over the past 5 years than my friends, outside because we’re here all day, every day and this time it’s 8 months…

AA: But spending like all day every day with people, you get pretty close!

HJ-K: Also, I haven’t sung so much as I have on this show. I think that I have sung more on this show than I did doing 8 shows a week in Viva Forever! 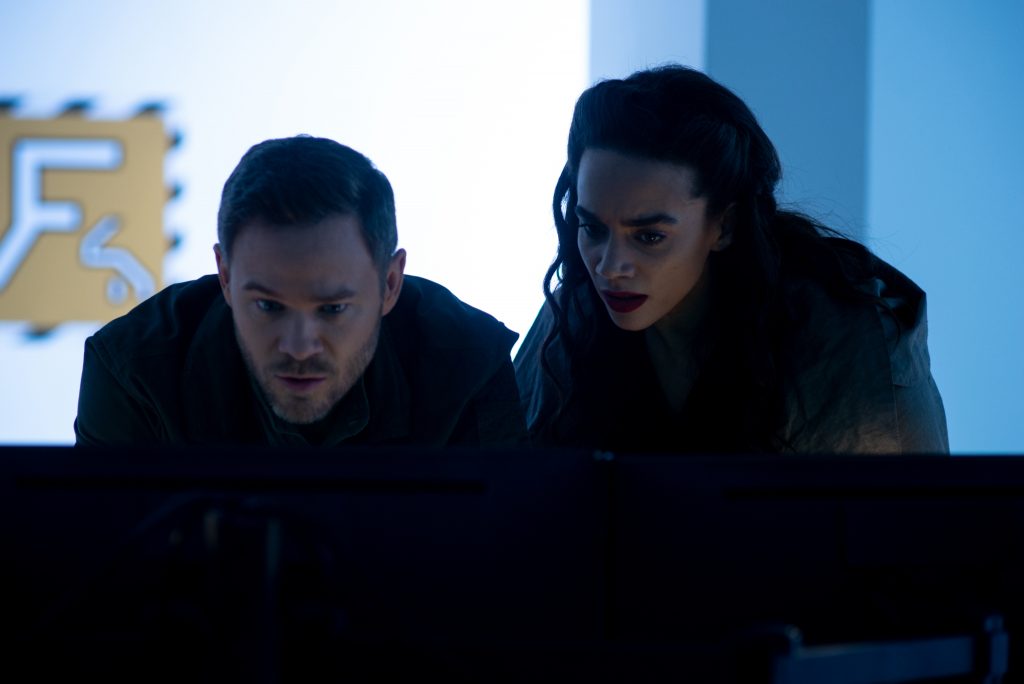 Brief Take: When we saw the costumes, there was a photo on the wall of an up-and-coming performer (who will be playing The Lady), and Hannah, she looked so much like you, it was unnerving. And on the series, you already act opposite yourself as Aneela and as Dutch. What is that experience like for you to play opposite yourself?

HJ-K: The first thing about acting opposite yourself is the weird thing when you’re in the read throughs and you’re putting on 2 different voices…

HJ-K: I felt like I was back to playing with my Barbies and Kens. [extremely low voiced] “No, Barbie” [extremely high pitched] “Yes, Ken!” That is how I felt in read throughs, and it gave me a little bit of anxiety every Friday. It is very strange. It’s a very strange feeling when you come to see it on screen, it’s [laughs] an even more strange feeling seeing two different characters, yeah, it’s very strange. 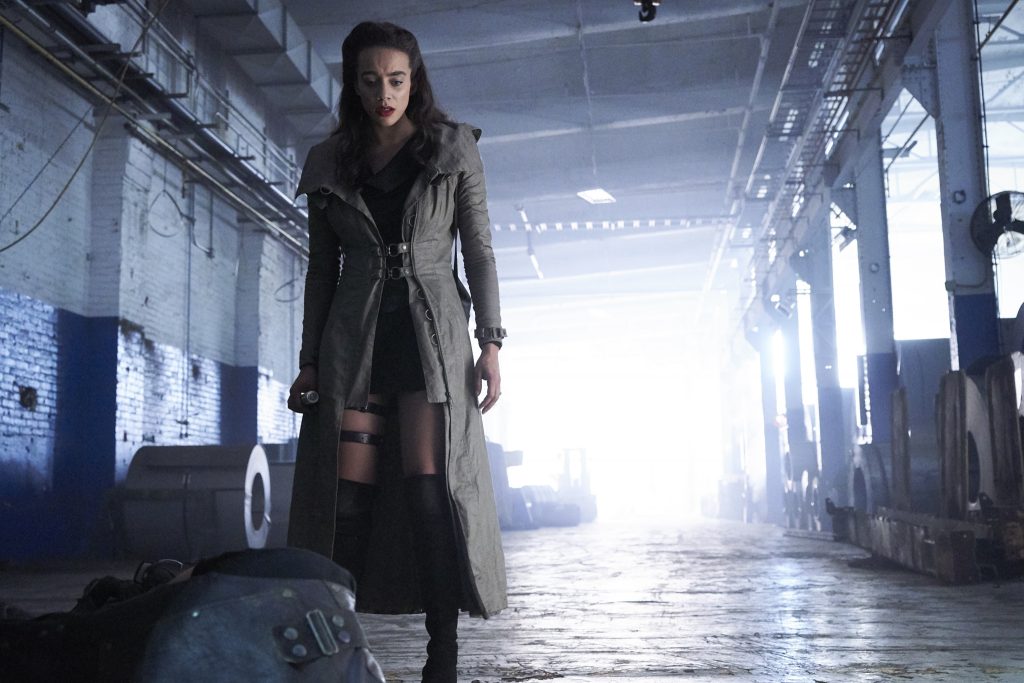 Speaking of which, how did you decide how to first play Aneela? Your mannerisms are different as Aneela than they are as Dutch.

HJ-K: I kind of looked at [actor] Rob [Stewart] [who plays Aneela’s father, Khylen] and how he is and his characteristics and his mannerisms. And I thought “Ah, okay! Like father, like daughter” and then I kind of had to go “Okay, what’s opposite to Dutch?” and Dutch is a very earthy, kind of grounded, always ready to fight and always on the defensive. Aneela is very ethereal, she’s Hullenized, she’s completely lost anything human about her and she’s up and she’s with the fairies and she’s crazy. So that kind of affected her voice as well, as everything was higher, everything was not of this world. She’s on a world of her own, you would say?

LM: I remember the first time hearing that voice, because I wasn’t a part of those scenes! And I remember thinking: “What the fuck??” It was a little like the first time I saw There Will Be Blood and I was thinking: “What the fuck is he doing?” and it’s a real nod to your acting. It takes 10 seconds and then you’re just [snaps fingers] totally there. It was amazing and those table reads are so incredible to watch. 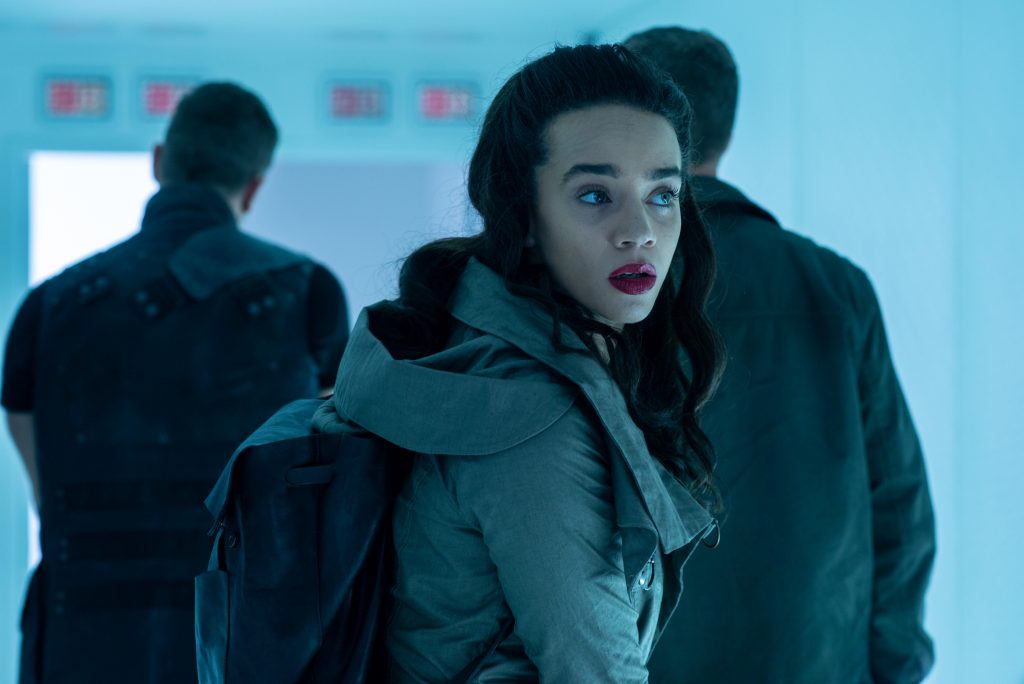 Brief Take: When this series returned for season 4 and Ant-Man and the Wasp came out in theatres, Hannah, you were the biggest star in the world. Did that feel kind of surreal to you?

HJ-K: [laughs loudly] Yes, this year, it’s been a very, very, very surreal year and I’ve had such a blast and been on incredible sets and played incredible roles. I think that I have been saying this for many articles, but it’s true that I’m pinching myself still. Coming home to Killjoys, it makes me so happy. It makes it absolutely perfect to say goodbye to the show and in the most amazing way with the people that I love, and I still pinch myself now being here. I’m also looking into producing as well and I’m interested in exploring many different roles in many different departments.

LM: I love telling stories on these two, so I’m going to do it again. [laughs] I remember talking to Aaron on the phone and he was like: “What’s it going to be like coming back? It’s like Hannah  worked with Steven Spielberg and Michael Douglas”, and I was like “I don’t know?”.

AA: She’s not going to want to hang out with us.

LM: And like…nothing has changed. Nothing’s changed, she really is the same person…who flies off to Paris on the weekends. [laughs]

Once Upon A Time … In Hollywood Review