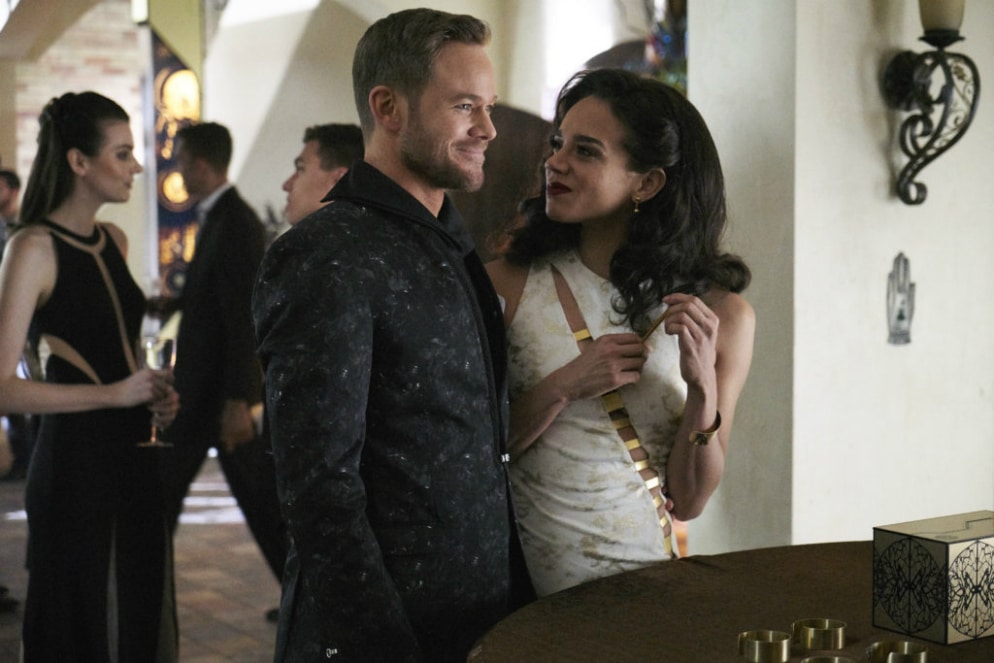 It was such a pleasure to speak with Hannah John-Kamen on the set of season four of Killjoys in our exclusive one-on-one interview. She talked about all things Killjoys and we alluded to her performances in Ready Player One, Tomb Raider, and Ant-Man and the Wasp, for which she wasn’t allowed to even mention her character, as the film was set to come out three months later.

The following is an edited and condensed version of our chat with Hannah John-Kamen, but as it goes with Killjoys, and just from her demeanour in general, she was really forthcoming.

Hannah John-Kamen: It’s been fun. It’s been a fun ride so far.

BT: What has been the common element weaving through your projects?

HJK: I think that with each character I get, it’s always character and story driven, that’s what entices me into a project – the character and the world it is creating. I’ve been lucky to be part of such amazing projects and it’s especially fun to do sci-fi with Ready Player One and fantasy-based scenes, that’s just the inner child in me, just playing and having fun. [laughs]

BT: In a previous interview you said that you were a fan of Old Hollywood.

HJK: Yes! Yes, HUGE fan of Old Hollywood! I grew up on it, on Some Like it Hot, Gone with the Wind, that’s my Grandma’s favourite film and I was really introduced to that at a very young age, so movies usually just triggered this excitement in me and this passion as well. 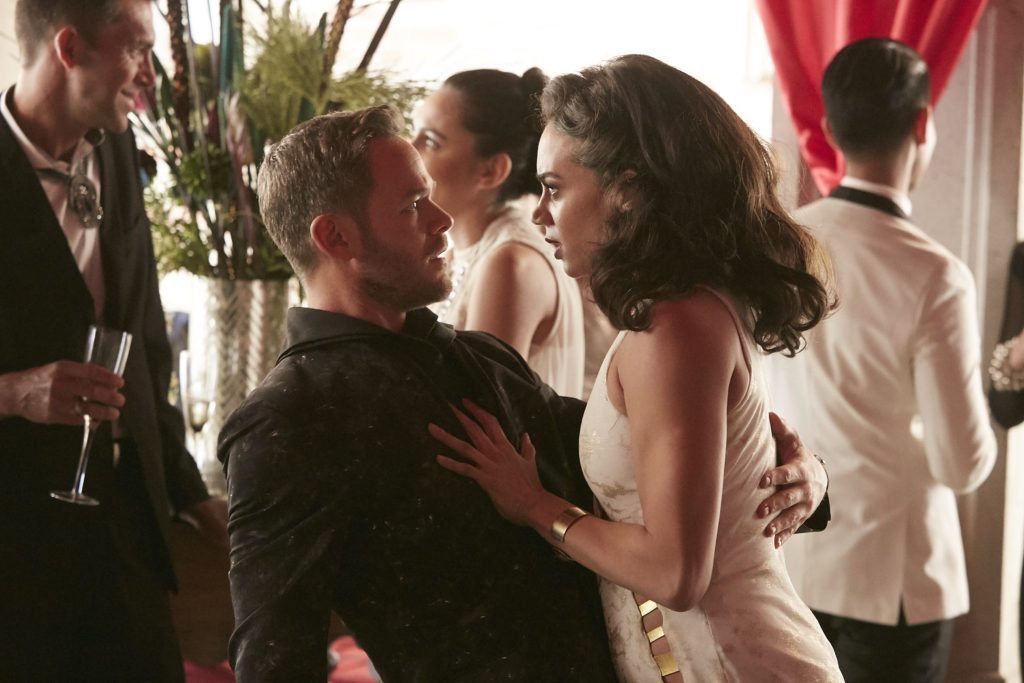 BT: What brings it all together with Killjoys?

HJK: Well, Killjoys we’re on season 4 now, and creating this character, who is Dutch, well, two characters now, Aneela as well. And creating this amazing home of what Killjoys is, it’s where the heart is, and it’s got so much heart and Michelle (Lovretta) has been so amazing to have done that. I mean it’s action, it’s friendship, it’s romance, the stakes are higher and it’s funny! I mean, what more could you want from a show?! It’s fast-paced, it’s great!

BT: And you’re the leader!

BT: Yet rare is the show in which a woman gets to be in charge and a biracial woman at that.

HJK: I know! And what’s beautiful about our show is all of the stuff doesn’t matter, it’s not described, and it has no hierarchy of…I mean, there is religion with the Scarbacks, but race and gender and sex, sexuality is: it ain’t no thing. [laughs]

BT: Our world can certainly learn a lot from the Killjoys universe.

HJK: Absolutely! We can learn from that world how to have a liberal mind toward gender, race and sexism and how to live in a freeing world. What isn’t freeing is the political side of things, which does mirror our world and reality.

Brief Take: Why do you think the chemistry just clicks with Luke Macfarlane and Aaron Ashmore?

HJK: I think it’s the laughter. We all say this – Luke, Aaron and I – I’ve never laughed so much as I have on this show. We’re a family. Also, to have the same crew and the same faces and wanting to come back and dying to come back, and just have fun on set, that was from the get-go, that was from the beginning. We’re just constantly in hysterics and laughing. It’s really a home and it feels like a family that I can trust.

Brief Take: How does it feel to play two very different characters on the show? Apparently, there was this one table read where you were talking back and forth with yourself.

HJK: Yep, I’m talking to myself and it’s so funny. [laughs] Reading at a table read with Dutch and Aneela was very fun! I’ve never done that before, because usually at a table read you’re waiting for the other cue, and I’m giving myself cues and interrupting myself. [giggles] Having that opportunity as an actor doesn’t come around too often, to be able to play two characters who are juxtaposing and also to find Aneela. And I started with “what is the opposite of Dutch?”. Let’s really differentiate these characters, because they are two separate, strong women in their own right, vulnerable women in their own right. It starts off with the vocal tendencies and the physical difference between the two characters. With Dutch, she is this tough, strong badass running away from her past, and her family. Her new family is Johnny and that’s where we started in season 1, and it’s all about letting her guard down and letting others come in. Then with Aneela, she is a tragic story, she had something afflicted on her that she couldn’t help and it wasn’t her fault. Plus she’s Khylen’s daughter and the Green changed her. She was kind of drunk on this Green and it created a madness in her character. What I love about the end of season 3 is that moment, with her and Dutch’s standoff, which I would describe it kind of like a cloudy day and then a thunderstorm happens and the clouds part, and it’s suddenly clear. 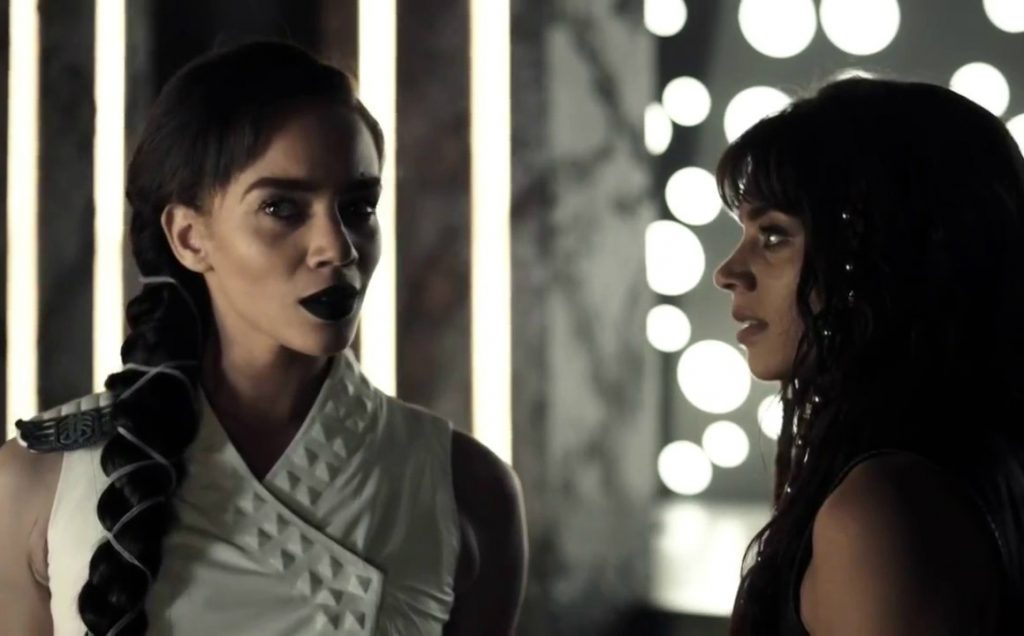 BT: A large part of it is the character but also what you bring to it. Listening to you now, you sound different. How much of yourself do you bring to these roles?

HJK: I think the question for when you play a character is “how much do you learn from them, as much as they learn from you?”, and it really does go hand in hand. I think with Dutch, of course, you infuse a lot of yourself into it, but it’s all story-driven, and also costumes as well, that helps. With Aneela’s militant high heels and pristine look, it makes her stand in a completely different way, in a more elegant, finessed way than Dutch with her ready to fight and punch and kick some ass leather boots. It really is different characters and the team here is incredible to help create that.

BT: What does Dutch mean to you now, compared to when you first started on Killjoys?

HJK: Oh my…Dutch is everything to me! Dutch is such an inspiration to me. Playing her at the beginning and the relationship that she builds with every single character in this world, in Killjoys, has been such a joy. I learned more and I learn more from Dutch as it’s gone on and now we’re on Season 4. Yeah, I am Dutch. Dutch is Hannah. We’re one. [laughs]